Eastpak has today re-launched its international website. The refreshed site went live today and represents the brand on an international level, focusing on Eastpak’s products and lifestyle offering. The cleaner fresh look of the site has been designed to make searching for news, products and information as fast and simple as possible and features such as the product finder and store locator make finding all you need to know about Eastpak a pleasure!

The site is organised into interest ‘groups’ e.g. News, Products, About Us, and uses two navigation bars that results in a fast easy to use site.
Read more
Interviews

Harry Main interview on FATBMX from 2006. Talent in the UK: Harry Main. By Roy. 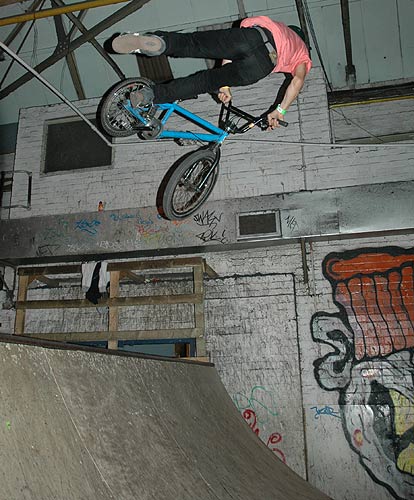 The number of articles on FATBMX is going through the roof. There's so much on the site. Use the Search block to find what you're looking for. Here's an old Harry Main interview we came across, from 2006, before he had any sponsors. Do you think you'll be in the same boat as Harry in 5 years from now? It might just happen. Keep going at it.

Liverpool is known for having one of the biggest skateparks in the UK Rampworx which has a lot of talented riders Harry Main 15 years of age which is one of them. He has 720's, flairs, 360 Tailwhips and much more wired and the chances are that this kid is going to been seen a lot more in the future of bmx.

Hi Harry, do you remember what it was that got you interested in bmx? One of my friends told me about
Read more
News

Nuno Milhinhos from Portugal is doing a bike company. He's been working on the first products since November 2005 but just last week Nuno received the first prototype. The brand is dubbed Ilegal (i-legal).  They'll have 3 frame sizes: 20.4", 20.7" and 21". The chain stays have a 13,75" to 14,25" ratio. The prototype in the photo will see some little changes. They already have a website address, but it is
Read more
News

Yo Yo Yooo Whassup Yo in da house Y'all? Mutiny RAP wanted

The people over at Mutiny are having a RAP battle. The prize is Morgan Wade's Mutiny Captain he rode at the Metro BMX Jam and a bunch of swag from Etnies, Snafu and Maxxis. Below is what the contest entails:

Morgan just built up a brand new 20.5"TT Red Captain with all black stickers. What's he going to do with the old frame you ask? We're giving it away in a contest! But this ain't just any ol' frame giveaway, because along with Morgan's frame (the same exact one he rode at the last Metro Jam) Etnies, Snafu, and Maxxis have all thrown down. Check out the loot you could be walking away with. Since this is a pretty heavy prize package we figured a giveaway was too weak, so we makin' you earn this shnizzle. And this is how:
1) Write a rap song
2) The rap must contain the words "grill", "dinosaur", "pirate ship", "corn rows", and "kings throne".
3) Film yourself performing it.
4) Send it to Mutiny.
Read more
News

Here we go with the: April 2006 version of the HARO news flash:

-News from the hands of Ryan Nyquist: Shiiiiiiit. I'm back on the bike now, just getting warmed and and comfortable for now. Hand is OK but not 100% so a little more time to get back top the norm and I'll be sweet. I just went on a road trip with Leigh Ramsdell down to New Orleans for Chad Degroot's wedding. Leigh and I went down on my motorcycle for the weekend. It took around 40 hours total roundtrip, and our bums and my arms were numb as hell, but it was fun and makes you appreciate how cushy and safer a car ride is.

Myself, Colin MacKay, Rob Darden, and Nate Wessel are all going on a cruise in mid April down to the Bahamas.
Read more
Pin*up

There were times when you got away with ads like these. Sure, it's been a while and the ad has been ridiculed in the meantime, but Lee sent us this Hammer ad which involved some girls and a bike and we're running it today.

A FATBMX visitor pointed out the following photo to us so we thought we'd run it. It's almost weekend lads, go get 'em.

On April 6, internationally renowned pro skateboarder Danny Way smashed the “Bomb Drop” world record by freefalling 28 feet from the Fender Stratocaster guitar atop the Hard Rock Hotel & Casino in Las Vegas onto a ramp below. The event, originally scheduled for April 5, was rescheduled due to inclement weather conditions. Thousands of spectators watched Way execute the drop off the guitar onto a ramp built by John Tyson and his team at VP Industries. “Despite the variables in the ramp design, once again, we managed to make this challenge happen,” said Danny Way. “This event demonstrates the continued progression of skateboarding.”

The Mini-FAT-JAM also had a party. Same place (OJA), different Band (The Vendetta's). Show me a place where you can buy a bottle of good beer for 1 Euro. Well, that's OJA and it's always a party there. The place got decorated with some old BMX stuff to stay in the BMX-theme. Many BMX-ers stayed for the night after the jam that day and it didn't take them long to get loose. Vendetta was the name of the bad that played that night. Although the sound was quite good, the singer messed it up. It was time to take over and a couple of people from OJA took the mic and played the instruments. Lee-Roi showed that singing can even be worse and the next move to get the party going was to throw a slick mat on the podium for a break-dance session. With so many people on the stage it was hard to even do a windmill, especially on the sound that JD Sinned (DJ Dennis) was playing at first (metal). This soon turned into some old school hiphop you don't stop until everyone on stage got thirsty again.
Read more
Reviews

THE FRIENDS OF KEN SCHNEIDER

You need to order yourself a copy of Roadfools 6&7 next week, here's why:

On March 22, 2006, Ken Schneider, the owner of Schneider's Bike Shop in Cleveland, Ohio, was robbed, beaten and left for dead in his store. The assailant had robbed Ken two times previously and when he came back a third time, Ken sprayed him with mace and tried to get away, but instead was attacked and assaulted with a hammer, causing massive head injuries. When Ken didn't return home from the shop at the end of the work day, his wife became worried and went to the shop to find him unconscious on the floor.

In the time since, Ken has had several major brain surgeries and is still in intensive care in a Cleveland hospital facing a long recovery. The attacker, who had recently been released from prison after serving a long sentence for voluntary manslaughter, has been arrested and is being held on a 2 million dollar bail, awaiting sentencing for this heinous crime.
Read more
Page 4788 of 4925