Carlo Griggs used to give Matt Hoffman fits on the quarterpipes and vert ramps. Both were on Skyway at the same time and both were amazingly good.

Actually Mat and Carlo are still involved. They both started a BMX company (Mat: Hoffman Bikes, Carlo: Proper Bike Co.) and both have private ramps so they can ride whenever time allows.

It's Carlo's B-day on May 7th. Make sure he knows.

Send a cake to Corey Martinez. It's his birthday today!

These guys are having their birthday this week. Make sure you don't miss their party.

Happy Birthday to you! 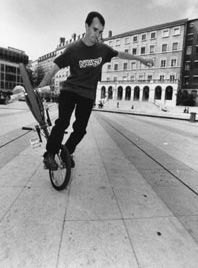 Starting from Monday we'll remind you who's B-day it is that week. It will give you a chance to prepare your present, pick up the phone or send a postcard to your friend. If you're running late you can always send them an online postcard or a simple e-mail. They'll probably be surprised to hear from you on their B-day.

It's Eric Rothenbusch's birthday today. Eric does the 23mag.com website that holds more history of BMX than any other site I'm aware of. Happy Birthday to you Eric.

Make sure to check in on Mondays for the BMX pros and friends' birthdays on FATBMX.com

Thanks to 23mag for the collaboration on this.
Read more
News

AMSTERDAM’S MAGERE BRUG ARENA FOR EUROPE’S TOP BMX RIDERS DURING RED BULL BRIDGE MASTER
In 1691, when Amsterdam’s city treasurers commissioned the Magere Brug (the Skinny Bridge) designed by Hans Petersom, they could never have imagined that more than 400 years later the same bridge would be the backdrop for what is already being called one of the most spectacular events in Amsterdam in 2006: the Red Bull Bridge Master.

On 22 April the best European BMX riders will jump their bikes on specially constructed ramps on the most photographed bridge in the Netherlands to show their tricks and moves. Although it is not the first international BMX event to take place in Amsterdam, it is the first in such a special public location. “The Red Bull Bridge Master provides the BMX scene with a unique opportunity to share its passion for this sport with a large public”, says Michiel Verberg of the Amsterdam

Canada's first BMX shop is looking for an employee.

Time to Get a Real Job? Ever think about a career in BMX retail? At Transition BMX you can keep your passion for riding and build your career at the same time.

Our Edmonton, Canada based retail store is looking for an individual with a strong customer focus, solid decision making skills, an ability to work independently, a mechanical aptitude, and a knowledge of BMX products to fill our in-store sales position.
Read more
Page 5362 of 5501