Written by Bart de Jong
Read 4354 times
UCI BMX RANKING
The 2005/2006 UCI BMX Ranking came to an end with the 2006 UCI BMX World Championships in Sao Paolo, Brazil. Once again Robert De Wilde (NED) showed great consistency throughout the season snatching the top spot in Elite Men, followed by always present Randy Stumpfhauser (USA). In Elite Women, Gabriella Diaz (ARG) won the overall ranking with great results on the Latin American Continent and at the World Championships. Another Dutch rider, Martijn Scherpen came out on top in the Junior Men Ranking with his strong season in Europe followed by his 2nd place in the World Championships.
Read more
Racing

REDLINE PROS GET IN LAST WINS BEFORE TULSA;

Written by Bart de Jong
Read 3821 times
Albequerque, NM: The USA has a HUGE, brand new indoor BMX facility in Albequerque, and the American Bicycle Association christened it by holding the Fall Nationals under its roof. When finished, this City-funded facility will supposedly be sweeter than the DeSoto, Texas track, and will host a Olympic-style BMX training facility. Although not yet complete, it was a great site for the final regular-season National of 2006. Of course, Team Redline and the rest of the BMX world wasn’t about to miss out on the chance to break-in the new building.
Read more
Racing

Written by Bart de Jong
Read 8180 times
October 27, 2006 – (San Diego, CA) Bombshell/Avent Cycles has hired BMX and Mountain Bike World Champion Mike King to their staff as the company’s Brand Manager. King will oversee many facets of the organization which will include areas of marketing and promotions, product development and team management. "Bringing Mike onboard as Brand Manager was an easy decision,” says company President and Founder, Gary Hickman. “His successful racing and management career which spans over three decades will bring Avent and Bombshell a wealth of knowledge and experience. We believe Mike will strengthen and add some creditability to our product lines along with mentoring future athletes.” added Hickman.

“This is a great opportunity for me,” said King. “Avent and Bombshell make great products and I want to make sure we continue that path and become even more innovative. This creates a huge challenge for me which I look forward to.”
Read more
Racing

Dale Holmes calls it a day.

Written by Bart de Jong
Read 3489 times
After giving it some serious thought I came to a decision to call it a day racing AA/ Elite in BMX. I have just turned 35 and it's time for a change and some new motivations and challenges. Free Agent / KHS, my family and close friends are fully supporting me on my plans and for 07 I'm going to give 4x Mountainbiking more of a push, something I've always wanted to do without the BMX distraction. The sport of 4x suits more of my age group and it's not as hectic as BMX, so it should suit me fine. Alongside racing MTB for KHS I'm going to be working more on Team management with Free Agent, among other Free Agent/ KHS duties. I feel I have pretty much reached all my goals in BMX and had a great time along the way, and even though I'm not racing I'll still be around as BMX is still in my heart and I'm as passionate about it now as I always have been since the day I began 25 years ago. It will be cool to just be a fan instead of a racer. I'm excited about the future.
Read more
Racing

BUBBA&rsquo;S BACK ON TOP IN ABA PRO PTS.

Written by Bart de Jong
Read 7344 times
With only 3 more races plus The Grands to count for the No.1 title, REDLINE’s BUBBA HARRIS is sitting on top of the charts once again after scoring wins both days in Delaware–at the First State Nationals (Oct. 14 & 15). With the season winding down and only a few chances left to “up” your score, all of the top AA-pros converged in Delaware, in what may certainly be the tightest contended battle for the Pro title this decade. Compared to the past two years, Bubba has been in unfamiliar territory lately – sitting as low as No.5 in points, due to injuries throughout the season.
Read more
Racing 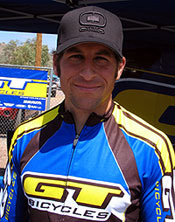 Round 12 of the 2006 ABA BMX Pro Series tour rolled into New Castle, Delaware this past weekend for some exciting Pro racing action. With the ABA Pro title still up for grabs with the top 4 AA pros in points right now, it would be an important weekend for each of the Pros looking to add the ABA Pro title to there list of accomplishments. All 3 of the Double A Marketing riders in attendance just returned from France last weekend from the UCI Supercross event. Randy and Kyle both represented the USA to help obtain a top spot for the USA in national team selection for the 2008 Olympic Games. With just one more weekend of the ABA Pro series and the ABA Race of Champions left to gain points before the ABA Grands, it will be some exciting racing coming down for the top 4 AA Pros.
Read more
Racing

Written by Bart de Jong
Read 12367 times
Intense BMX is proud to announce the arrival of 2007 complete race bikes. Intense BMX offers the best complete line of the race ready BMX bikes you will find anywhere in the world and the amazing part is that they range from $329.99 to $399.99. Built the award winning geometry and look of our Top of the line Sabot Race frames, the new Intense BMX complete bikes will have you looking like a winner right out of the bike shop door and help you get onto the podium at the race track.
Read more
Racing

Written by Bart de Jong
Read 4982 times
Sea Otter Classic will shuck its hard-earned reputation as a "cycling festival" in 2007. Never fear, instead the Sea Otter Classic will best its reputation as the largest, most celebrated cycling festival in North America by adding key events that reflect Sea Otter's innovative spirit, like BMX. BMX at last gets its chance at the limelight with the eagerly anticipated return of BMX racing to Sea Otter. In preparation for its first-ever appearance as an Olympic sport in 2008, Sea Otter's BMX event will feature an NBL-style BMX track with "tabletops," rollers and one or two rhythm sections.
Read more
Page 585 of 605