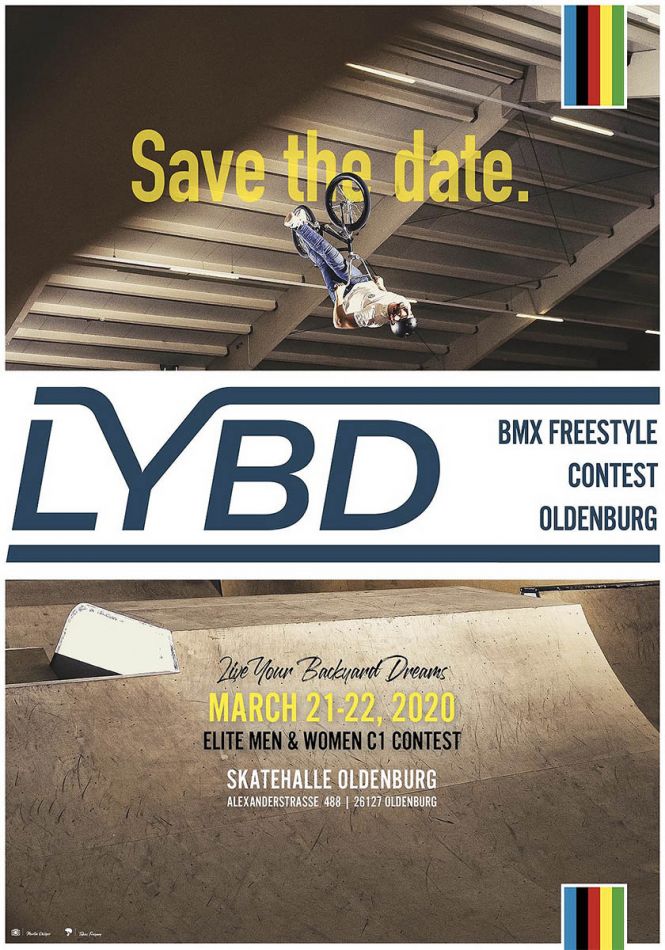 The whole Backyard team is thrilled to be able to host the second UCI BMX Park C1 contest in Germany! With the „Live Your Backyard Dreams“ contest we can offer international riders the chance to compete for UCI points in our great park. This is an Elite Pro (women and men) event only, so please bring your license. 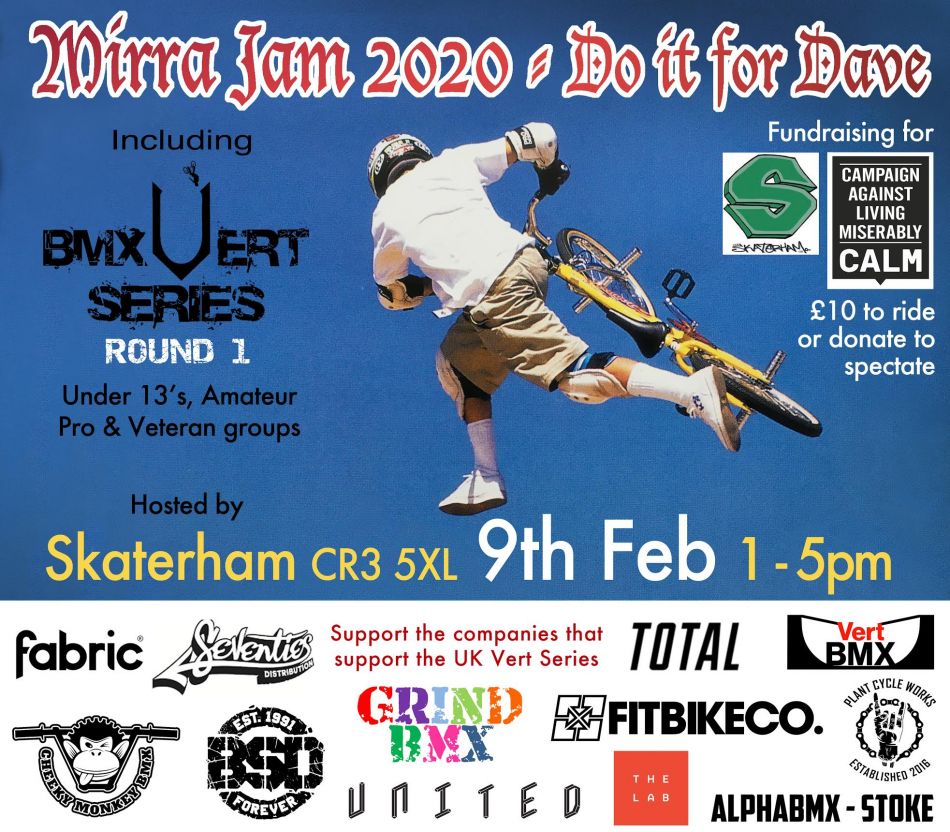 Mirra Jam 2020 & UK BMX Vert Series Round 1. It’s that time of year to dust off the steed and get yourself down to the annual Mirra Jam at Skaterham skatepark, CR3 5XL. Sunday 9th Feb 2020 from 1pm – 5pm. Come ride and remember Dave. Then beers in the pub afterwards! Once again the Mirra Jam will also be the first round of the 2020 UK BMX Vert Series. The skatepark will be open for anyone not wanting to compete. £10 on the door... The jam will be a fundraiser for two charities: CALM - the mens mental health support line and Skaterham itself.

Spread the word, bring a mate, especially if you’re feeling low or have ever been affected by the UK’s biggest killer of men under 40. Last year was completely nuts. Lets do the same. Do it for Dave! This year is JUST JAMS. All about supporting each other and getting on the big ramp. No need for 44 second runs, no judging sheets, just fun, radness and prizes if you push your envelope! We will have under 13, 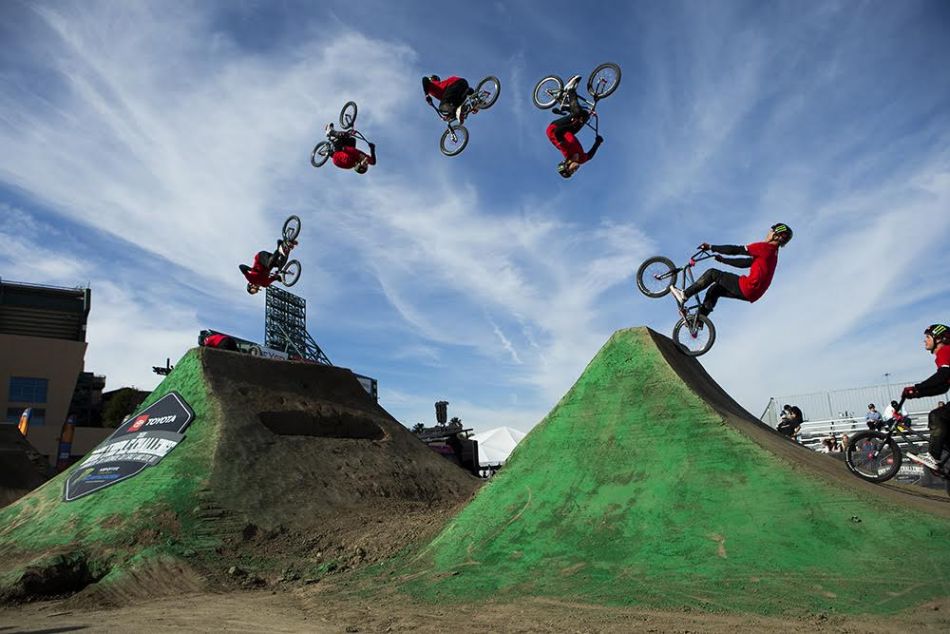 Monster Energy congratulates team rider Pat Casey on his strong third-place finish at the first stop of the 2020 Toyota BMX Triple Challenge contested in Anaheim, California, this weekend. Also kicking off the new season with a trophy, Casey’s teammate Andy Buckworth claimed the win in the highly competitive Best Trick event at Anaheim Angel Stadium. Now in its fourth year, the Toyota BMX Triple Challenge is a three-stop competition series that takes place during select Monster Energy Supercross events. Dedicated to showcasing the progression in freestyle BMX, the series attracts the best riders in the world as well as up-and-comers who are looking to make a name for themselves. Following the season kick-off in Anaheim, the 2020 edition of the Toyota BMX Triple Challenge will

The BIG RIG BLASTER by United. 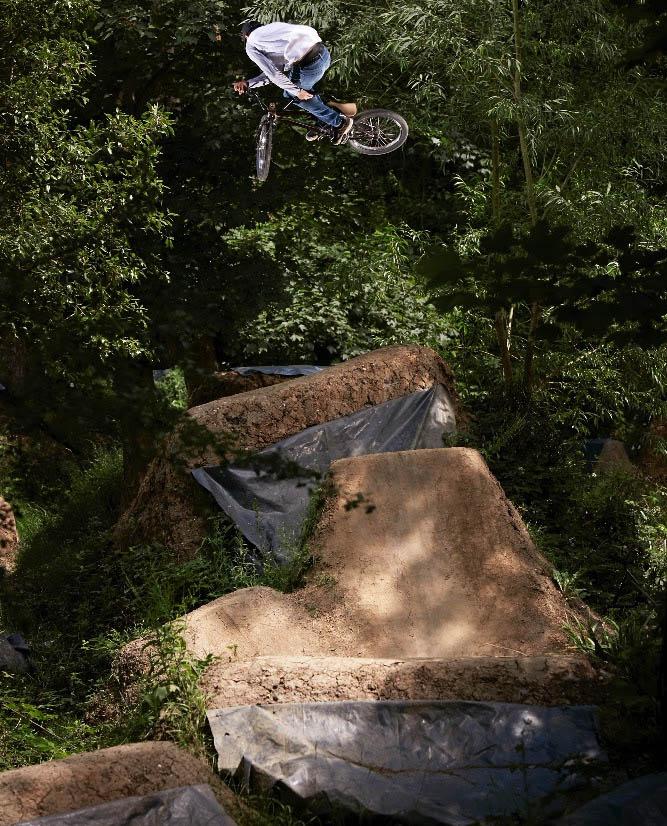 READY TO HIT THE BOOST BUTTON? When you're going mac ten at a take off you want to know you're in safe hands, the boost is coming and you want to go all out! Jump on board a Knightsbirdge and sail your way through the session without any second guess.

The ultimate boost weapon went back to the workshop and partook in some surgery! Now coming with more rounded top tube sizes from the 21.1, 21.4 and 21.6! This blasting beast is well equipped! With welded lugs, lowered chain stays for extra brake clearance and a newly embossed head tube badge. The graphics took on a simplified approach and we think this really sets the Knightsbridge v2 off!

Butted and tapered tubing throughout

Getting kids on bikes for the holidays, SE donates to Philadelphia organizations 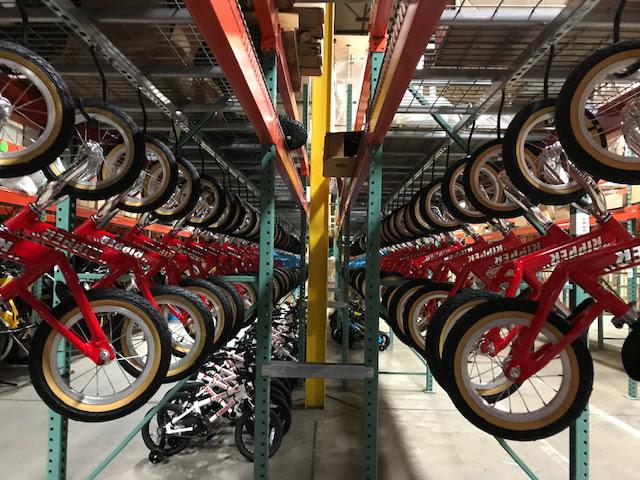 At SE Bikes, #letsgetkidsonbikes means more than Instagram hits. It’s a movement we truly believe in. We want the next generation of bike riders to fall in love with the sport as we have, for exercise, fun and friendship. Not all kids have the opportunity, though. Which is why this holiday season SE donated hundreds of bikes to six organizations in Philadelphia, all with the goal of … well, getting kids on bikes!

“We wanted to partner with our community and give back to organizations that are working hard to improve the lives or our kids in our cities,” said Frank Zimmer, president of BikeCo, the American distributor of SE Bikes. 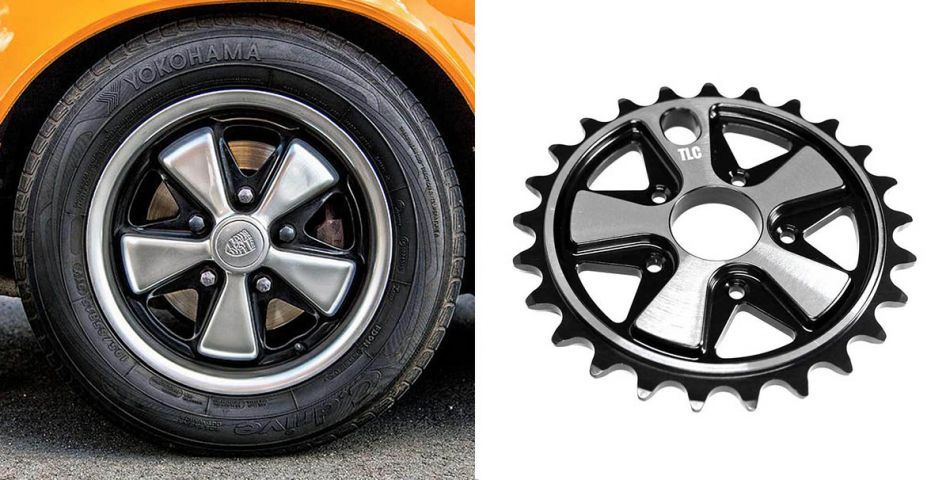 New to 2020, the TLC Vintage BMX sprocket featuring a 5 spoke design which is built to last and looks awesome! Machined from 7075-T6 aluminium and styled on a Porsche 911 Fuchs wheel for that vintage feel! Available in black with a machined face, gold and our very popular rainbow finish! Thickness: 8mm.
Weight: 91 grams

All TLC products have a 12 month warranty against manufacturing and material defects. 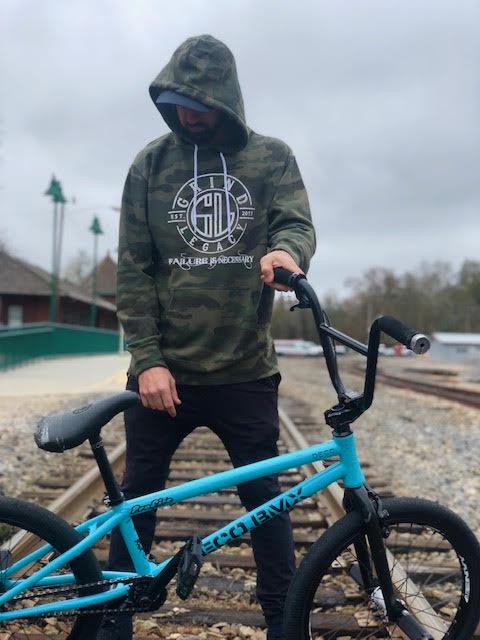 Adams has been competing as a professional BMX Flatland rider since he was 16 years old, he has become one of the sport’s most recognizable names. Winning dozens of championships during his 20-year career, including a Gold Medal from the X Games, a two-time winner of the NORA cup award which is the sport’s most prestigious honor, -Ride BMX Magazines “Number One Rider” Award (NORA) and he continues to push himself as an athlete as well as someone in the industry that understands the business side of being a professional athlete. Grind Legacy Apparel is a fresh new brand focused on changing the mindset of individuals to embrace the concept that “Failure is Necessary”. This is done through our companies 4’E’s, Educate, Execute, Endure and Empower!

Dwight Womack founder of Grind Legacy says: “After following Terry for the past couple of years this was the ideal fit for us. It’s also a great compliment that he really digs our apparel! Terry has embraced our culture by not being afraid to fail while perfecting his craft! He understands this is a key attribute to be great!”

Terry Adams: “I’m excited to be riding for Grind Legacy Apparel because this brand stands for everything I believe in, my entire career has been based on grinding daily to keep the dream alive, so to say Grind Legacy fits my lifestyle is an understatement” 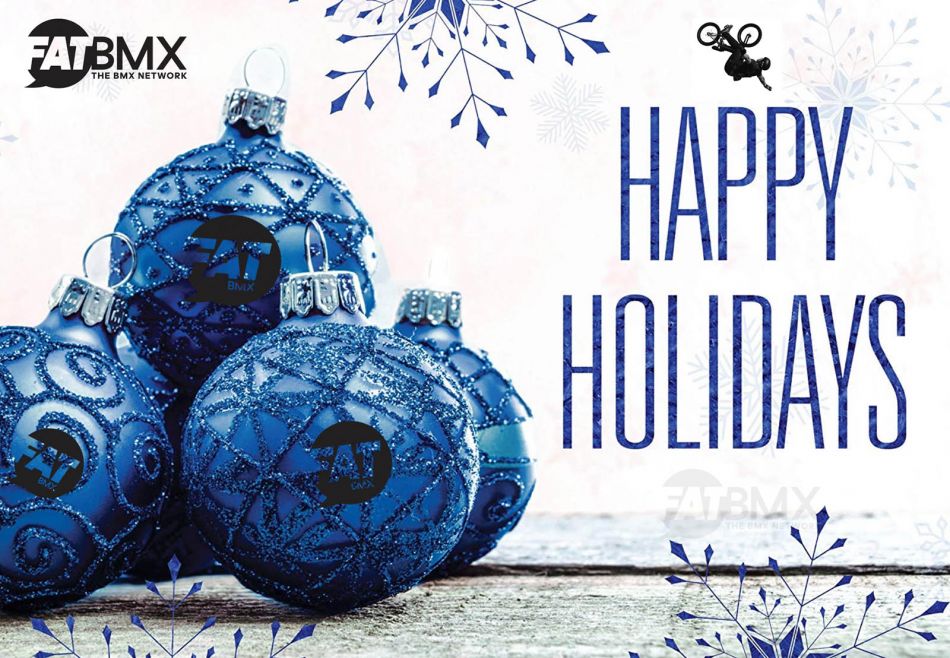 Looks like we've all survived another year of BMX together and as usual, we're looking forward to bigger and better things to come. From everyone at FATBMX we wish you all the best in 2020. We're looking forward to big things to happen in 2020. Paul's Boutique BMX Hardware store will celebrate its 25 years in existence on April first and BMX Freestyle Park will crown their first Olympic Champions. On top of that it looks like The Netherlands has some solid medal contenders for Tokyo 2020 in the racing category.  Make sure to follow us in 2020 if you don't already do so. Use our Instagram account (@fatbmx), Twitter account (@fatbmx) or reach us on facebook (@fatbmx or @fatbmx.com) to send us your questions or simply follow our happenings. Let's make 2020 a good one! 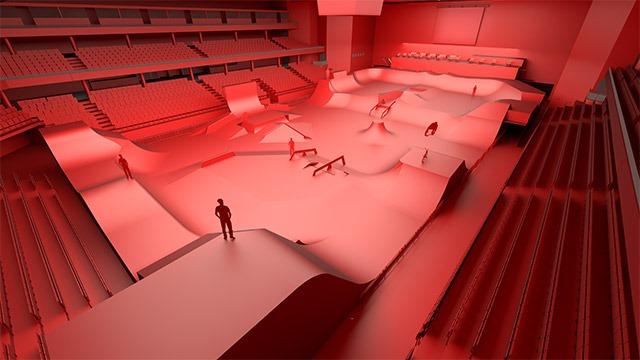 Exciting news from the Simple Session team – we have just released our brand new 20th Anniversary event website along with the epic course design and the incredible line-up of athletes including past and present world champions and Simple Session gold medalists.

Behold – the Simple Session 20th anniversary course design! The man behind the park design is the one and only Nate Wessel, who for the 14th time in a row has blessed us with a course that will cater for everybody – the fast and loose, the tech and precise, the skaters and the bikers. 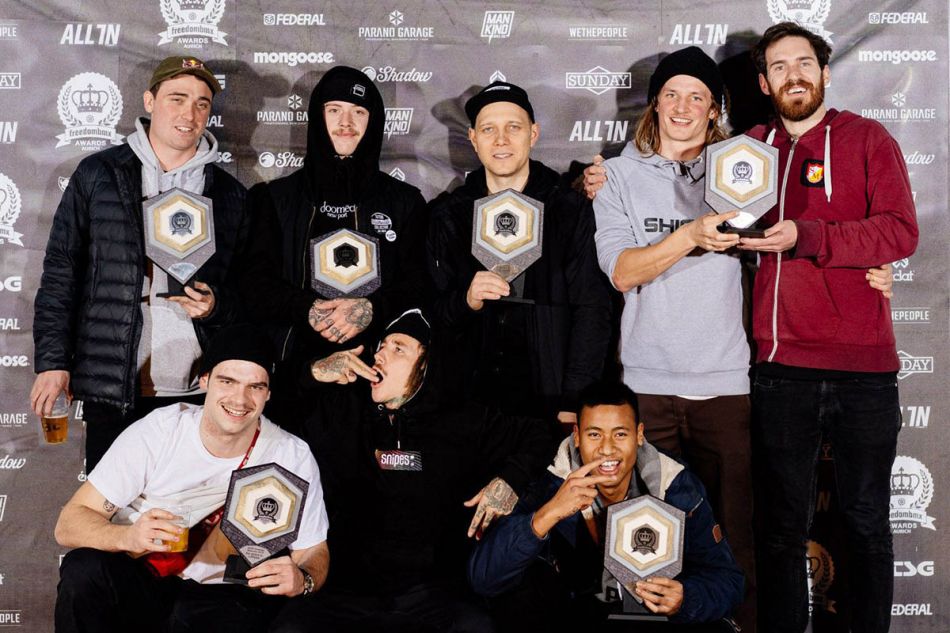 Some events become traditions. The organizers are stuck doing the work year after year. It's nothing bad, just a lot of work. Behind the scenes it's always hectic, there are always problems to be solved. While the party people have made plans for a trip, the organizers are keeping their fingers crossed that things won't go out of hand and everyone will have a good time. The 2019 Freedom BMX Awards took place in Aurich at the Adventsjam last week. Timm Wiegmann's 20th jam edition played host to the annual award show and it turned out that these riders went home with an award.