Written by Bart de Jong
Read 6065 times
Europeans are lucky to have Simon Tabron around. He fires out the awesome 900 when he feels like it. Down under it's up to Tim Wood to get the job done (or Luke Fink on street).

Written by Bart de Jong
Read 7002 times
Scotty is back in the cold after leaving 80 degree So Cal.  The last day of his Mega Tour trip he and a bunch of others had to go to Sheep Hills, the famous dirt jumping spot from back in the day.  Don't get me wrong I love Sheep but it is not up to par with today's trails and takes a lot more pedaling that today's downhill style trails.  I continued to warn them but they insisted on going, very good and fun time seeing the guys tongues hanging out pedaling at all the jumps.  I am sure there will be some footage of it in Props Mega Tour 5 when it comes out.  Pics of the day are Scotty at Woodward (double whip tail taps) and Scotty at Sheep.
Read more
Freestyle

Written by Bart de Jong
Read 5226 times
The 2006 Pop! session in Tallinn was a nice one. We reported from Estonia earlier this year. Now the organization sent us a report and we thought we'd just put it up as well. It's got some nice pics. More Estonia for y'all.

The 6th BMX and skateboarding competition Pop! Session 2006: Winter Bash was held on 6th - 8th of January 2006 at the Saku Arena. Pop! Session weekend contained much more than the contest - three full days of BMX and skateboard at its best. Besides parties, there were also four movie premiers in the cinemas of Tallinn. Bigger skatepark than ever was accompanied by professional live broadcast on big screen which this year was also broadcasted entirely live in internet. So besides 12.000 spectators in Saku Arena people around the globe were watching the event.
Read more
News

ONE's ANETA HLADIKOVA out of competition

Written by Bart de Jong
Read 6864 times
Aneta Hladikova, Elite Woman from Czech Republic, broke her wrist at round 5 of the European Indoor Championship in Zwolle, Holland. While leading she hit a jump with her front wheel and landed on her wrist. In 2 weeks Aneta may get plates in her wrist to reconstruct the complicated fracture.

Aneta had just signed a 3 year contract with the ONE KENDA BMX racing team. She’s a former World Champion and is the 2005 European number 2 and World number 4 in 20” Elite Women.

We hope Aneta will recover soon and can get back to what she loves most: BMX.

Written by Bart de Jong
Read 3393 times
We had close to 500 voters in the 2006 new year resolution poll. We asked what they had planned for the new year and here is how it came out:

Sounds like we'll be seeing some spine 360-s and tailwhips at the dirt jumps this summer.
Read more
Reviews

Written by Bart de Jong
Read 3150 times
The German BMX mag is going steady. The latest issue has Hannuh Cools on the cover and in case you're wondering, the Belgian sky is always yellow (because of the fries and the mayonnaise and the yellow lights on the highway). Three Euros and twenty cents is a steal for a 68 page full colour BMX mag. Before you go out and subscribe to have it delivered to your doorstep, it's good to know that it's written in German. This will probably help with your German class at school so don't hold back. But what do you get? After the intro you get all kind of info in the news section. The 2006 event calendar is missing this summer's FAT-JAM (19 August) so mark that calendar now. Tons of DVD reviews, Kopp's music top 5, Freedom goes Emo article and then straight into the Backyard Jam report. The Lumberjack jam in Aurich took place without Gary Ellis there. At least he did not get a picture in the report. What's a magazine without an interview. Sig and Hannuh Cools are contest regulars from Belgium and explain what they're about in the 6 pages they get.
Read more
Reviews 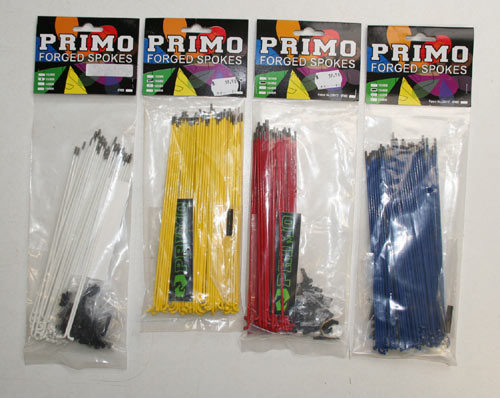 Didn't we laugh at Jay Miron's green spokes at that contest at Moreno Valley 10 years ago? Well, I did. It has taken a while but the trend is finally here. Primo jumped on it and came out with coloured spokes. You can choose from Red, Blue, White and Yellow.
Spokes are not really a part that you can just bolt on. It takes some patience and skills to lace up a wheel. Why not give it a try now that it's cold and wet outside. This is the time to do it, spin that spokewrench! Once you get the hang of it, it's actually a good challenge and you will be able to get that kink out of your wheel next time you have a nasty hang-up.
Read more
Reviews

Written by Bart de Jong
Read 3503 times
DIG celebrates their 50th issue with a 132 page bound book. For $6 bucks it's yours and we can only recommend you get yourself a copy. Even if you crash and lay on the street you can make the cover of a magazine. Just ask Paul Robinson. The pages have gotten bigger which means more room for text and bigger pics. After flipping through the Dig This section with news on Dave Young, DIG tattoos, family photo albums, Baz and Leland (of course) and the DIG office, it's time for the Flat Earth Society with a report on the Braun Flatground comp and a bio on Kotaro Arai. The Video stor has DVD reviews and a short interview with Rob-O on the upcoming FIT DVD. The retrospective is with non other than Ian Morris (4 pages) and Taj (also 4 pages). Lost For Words is a photo article with 22 pages of killer shots from Terra, Oberlachner, Adam, Holton, Carson, Docherty and Dolecki.
Read more
News