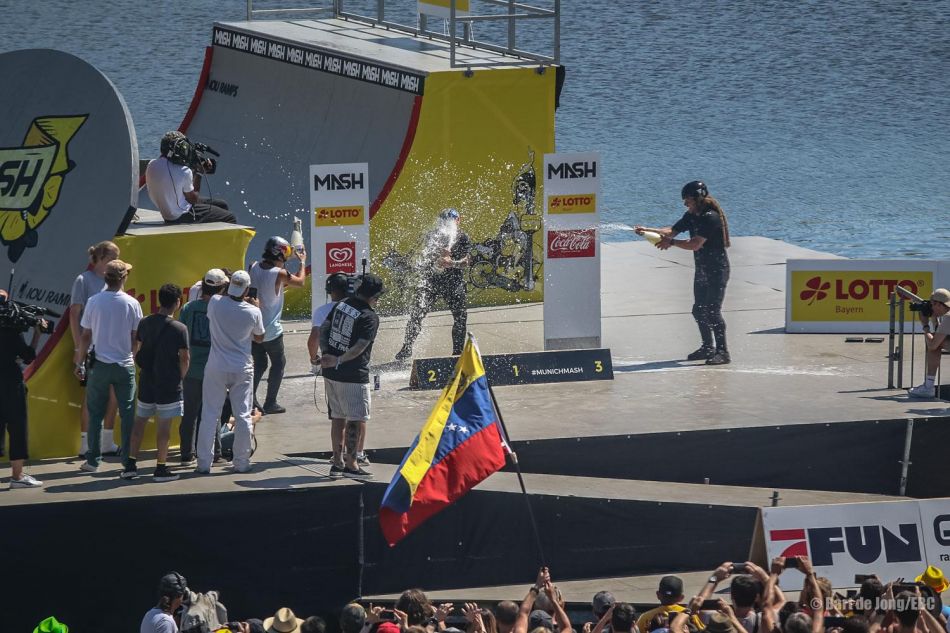 The 2022 edition of the Munich Mash event has come to an end. BMX Mini was won by Kieran Reilly (GBR) who beat Daniel Dhers' (VEN) in his final run of the day. Third place went to Tom Justice (GBR) who edged out Florian Dean (GER) in the 4-men final. The large crowd enjoyed the BMX part of the event. In 6 weeks' time it's back to Olympia Park in Munich for the European Park championships. 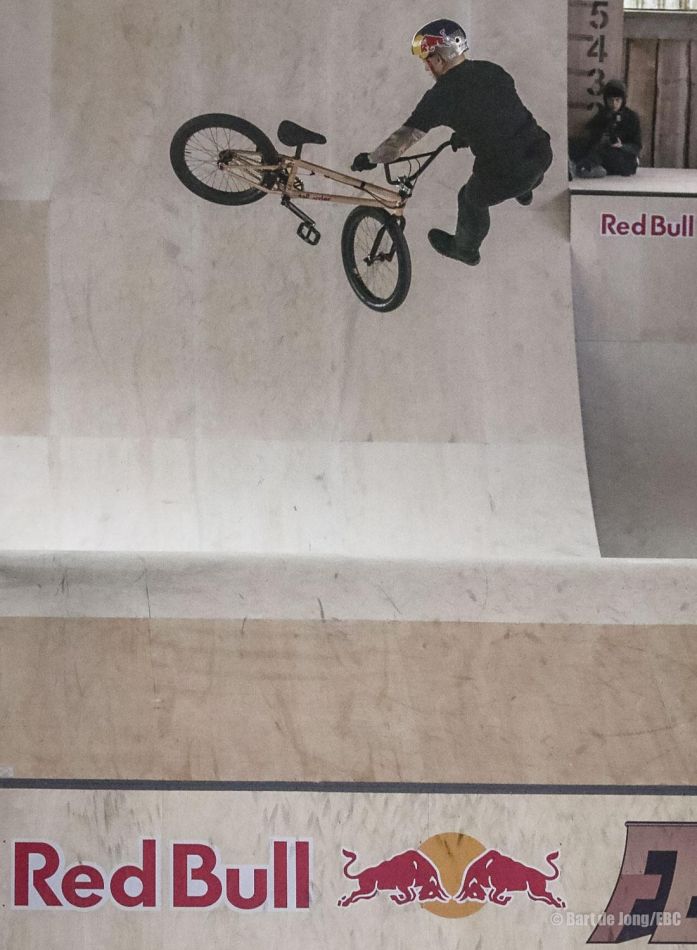 In BMX Freestyle you can do anything you like. Bas Keep thought the same and had Red Bull backing him up with the Red Bull Featured pilot event. The ramps were built up inside The Mill at the DYFI bike park over in Wales. Getting there was a mission for pretty much everyone as everyone had the chance to see the Wales countryside for the last two hours before arriving at the destiny for the event. Once there, and with everyone around, you become one with the place instantly. The riders had had a few days of practice behind them before the first drop-in was made on `featured day’.

The set-up was pretty wild, yet fairly simple. The drop-in reminded me of the movie rad but was missing the Welcome To Helltrack logo on it. It was steep, high and gave you enough speed to go nuts on the biggest box in BMX history (pretty much). The box was put in the middle with two 7,5 meter long driveways right next to it that lead to a 10 ft quarterpipe into a mellow 15ft high quarter landing. There was a reason for a set up like this. It invites for big tricks without landing flat and to progress in BMX Freestyle, sometimes the right set-up is what’s missing.

Red Bull Featured was split in 4 different rounds being a high air competition, a box competition, quarter to big landing competition and a sub box was brought in for Round 3. 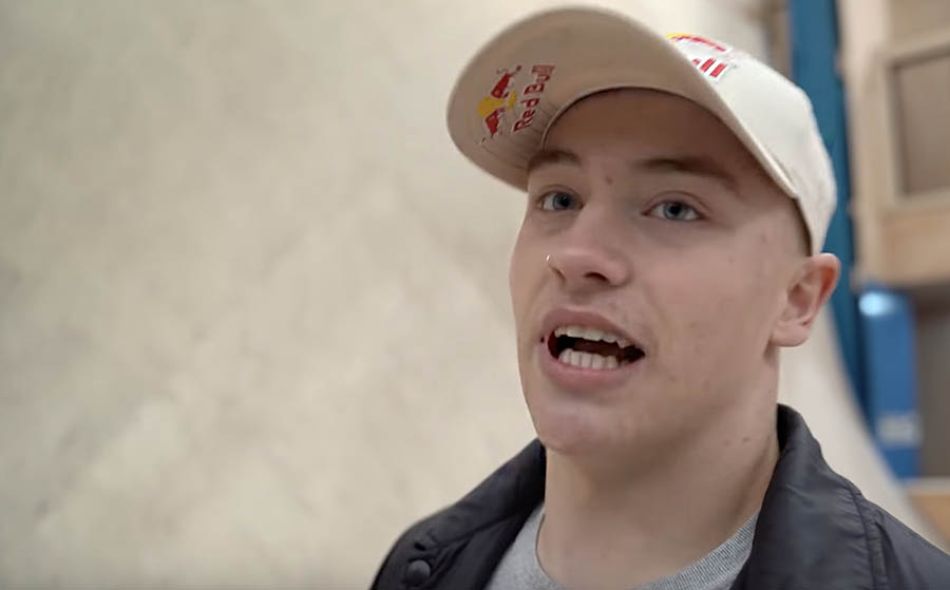 THE TRIPLE FLAIR- EXTENDED BTS (How it all went down!) by Kieran Reilly

THE TRIPLE FLAIR! you all know the work I put In for this but in this I video we documented closer to myself and how I felt throughout and the progression leading up to getting the worlds first done! 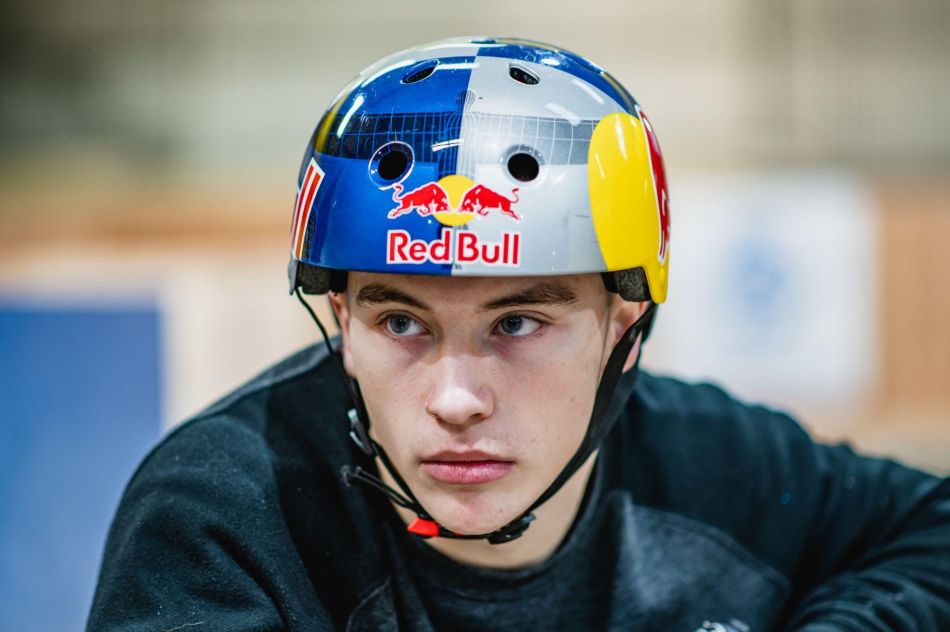 Every iconic athlete on two-wheels has an indelible moment. Matt Hoffman’s no-handed 900, Kevin Robinson’s first-ever double flair or Dave Mirra’s triple X-Games gold - live long in the memory of BMX fans minds. British BMX rider Kieran Reilly may have just made his first lasting imprint on the sport in his early twenties with a world first trick. Kieran Reilly became the first person in the BMX world to land a triple flair at Asylum Park - a feat that pushes the boundaries of what was thought possible in the sport and a trick that shows the incredible trajectory that the star British BMX rider is on. The trick can be watched on Red Bull UK’s Instagram, TikTok, with a full behind the scenes edit launching on Red Bull’s Bike YouTube channel. 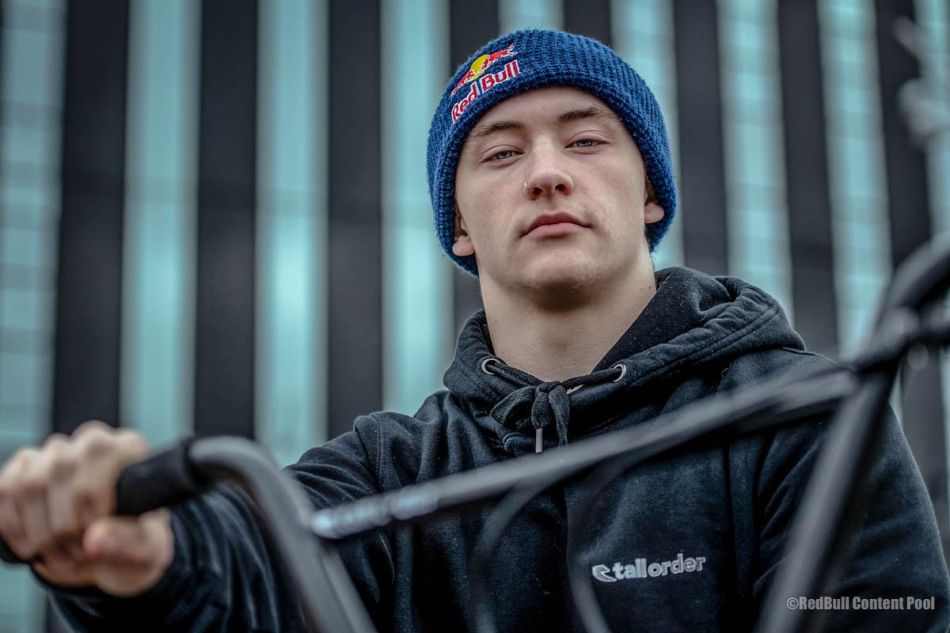 Progression is key in BMX, how do you consider trying something new every time? Do you complete the trick in your head and then send it?
Kieran Reilly: I find I feel like I’ve had a better session if I’ve learned something or at least pushed outside my comfort zone and so that motivates me to be constantly trying new things, I usually just have 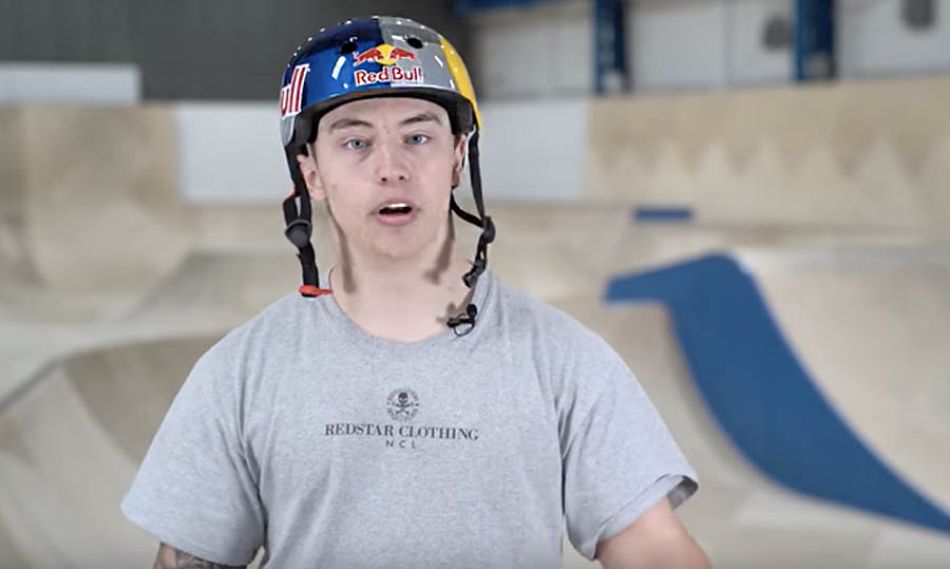 British BMX heavyweight Kieran Reilly has spun his way into the BMX history books landing the world’s first triple flair. To make it happen the crew built a custom roll-in and ramp at Asylum Skatepark in Nottinghamshire, England, where Kieran spent days on end attempting the trick, taking heavy hits one after another. The learning curve was steep, painful & at the end, breathtakingly successful. 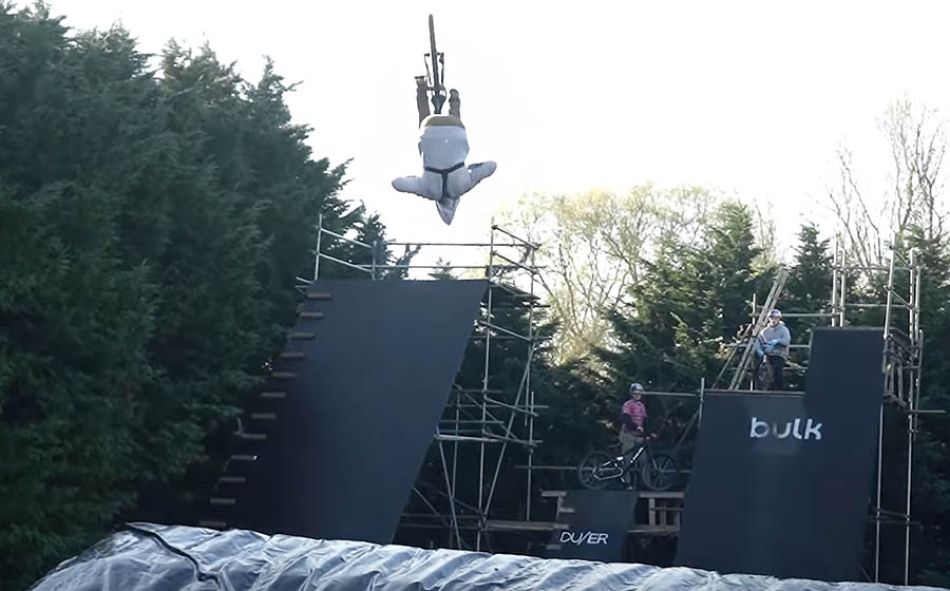 HE ACTUALLY LANDED THE WORLD’S FIRST TRICK AT MY COMPOUND! by Matt Jones

Everyone was so hyped after the last BMX & MTB compound video with Kieran Reilly, who is a pro BMX and olympic athlete. Kieran threw down some insane tricks in the last video whilst I continued my quest to land a 1080 on a mountain bike. 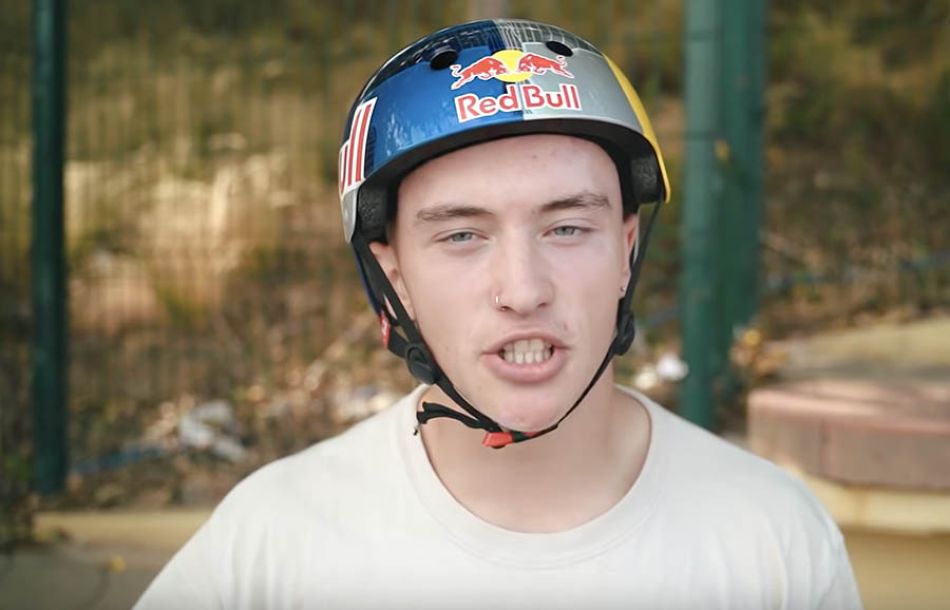 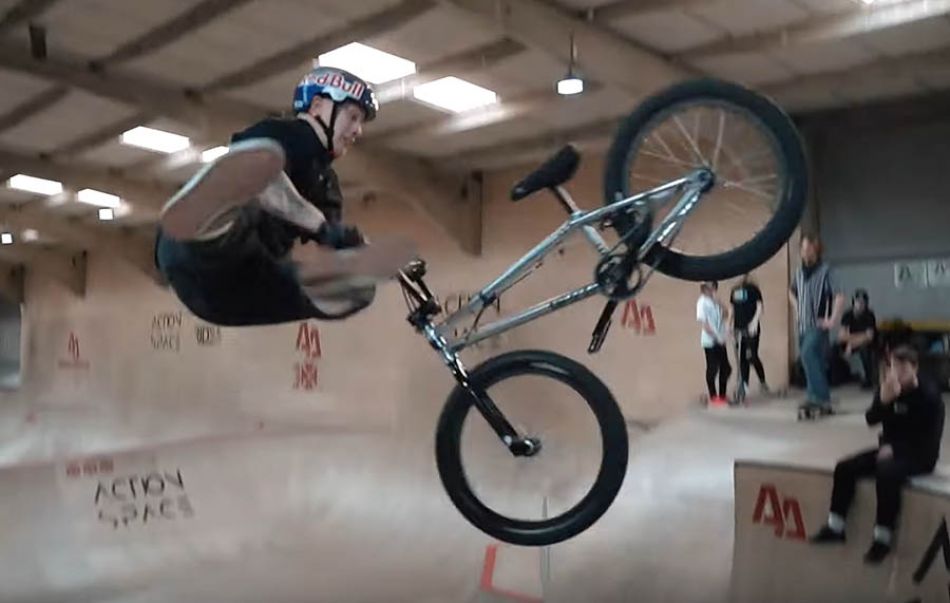 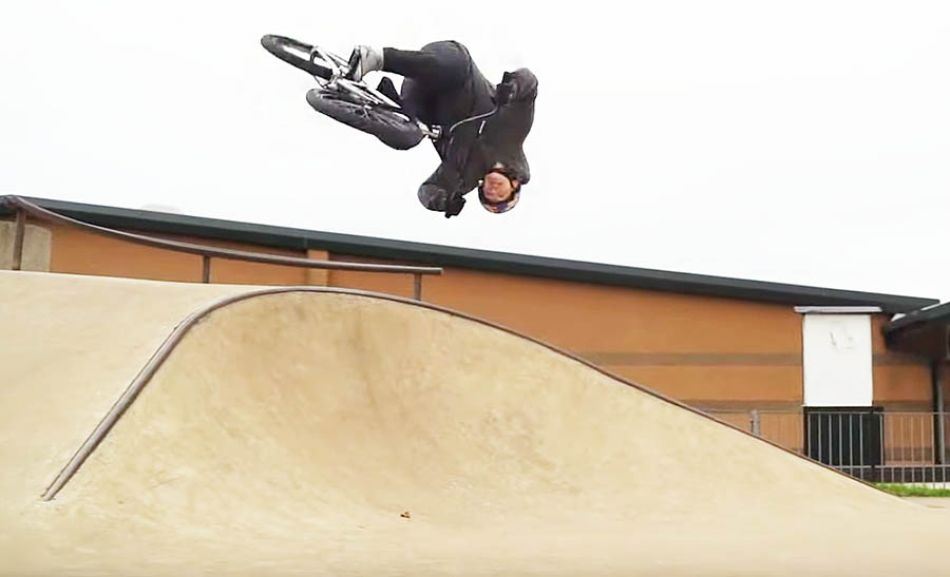 The Year That Changed EVERYTHING! | 2020 by Kieran Reilly

The Year That Changed EVERYTHING! | 2020 by Kieran Reilly