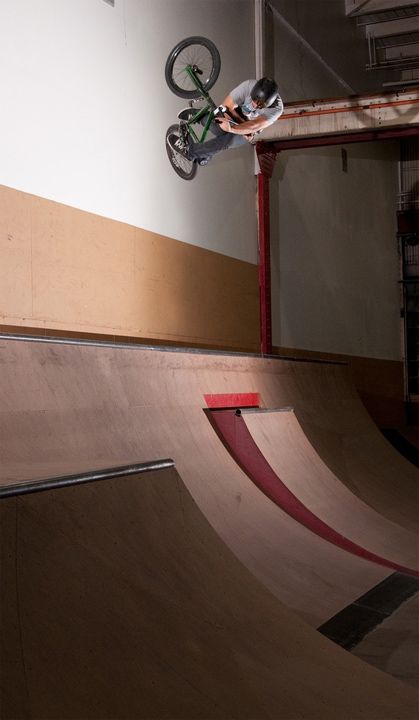 Upstate NY has always had an active BMX scene. Rochester, NY is home to Kink Bike Company and hometown of Tom Dillon and the Hamlin brothers, Tony, Jake and Mitch. What Rochester hasn’t been home to, for over a year now is an indoor park to support the local riding scene. That all changed on July 2nd with the opening of the Rochester Action Sports Park or R.A.S.P. as it is known. With over 25,000 square feet including a 23’ vert wall and enough quarters, rails and ledges to suit any rider, owners Ed Mineck and Tony Britt have answered the need for a top quality park in the city of Rochester and done it all in less than a year.

I stopped by today to talk to Ed about the park and his plans for the future. While the park design itself is truly outstanding, even more remarkable are the people behind R.A.S.P. There are a lot of people who open parks for a variety of reasons. Some know little about the business. Others think they can turn a quick profit. Some have experience and others are riders who open a park so they always have a place to ride. The rarity is the individual or individuals who are truly altruistic and see the vision of what a park can
Read more
Scene Reports 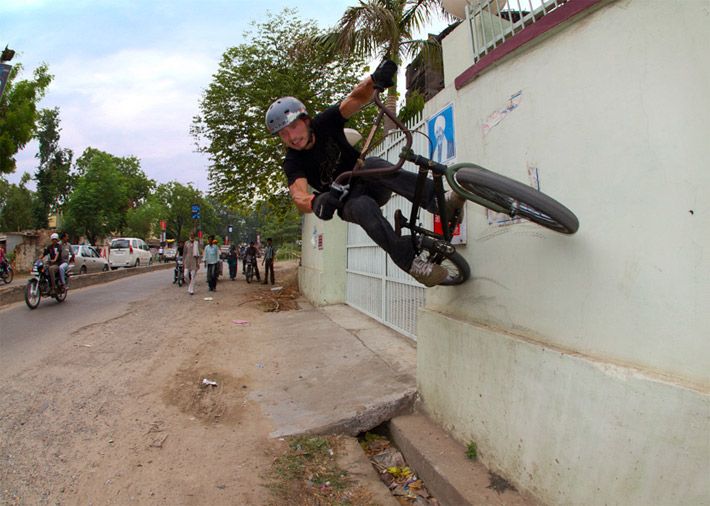 Monsun, screaming people, dirt, noise, joy, love, everywhere cows and dogs and in between big guys on small bikes… Camp-Ramps was in India, organising a show-tour with 7 stops all over India from New Dehli over Tachmahal to the border of Pakistan. Hannu Cools from Belgien, Sergej Geier, and Paddy Gross from Germany, Alex Johann, Brandon Christie and Scott Wirch from the States rocked the set-ups from Rajasthan to Delhi. We had the worst conditions (floated Ramps and dirt that mutated to mud) but nevertheless the
Read more
Scene Reports

Bike Park Lublin – the biggest complex in Poland already completed We are more than pleased to inform you that in Lublin is now being erected one of the biggest Bike Parks in Europe, the construction of which started in 2009. For quite a long period of time the authors of the project have been publishing on our forum their reports from the construction site.
Read more
Scene Reports 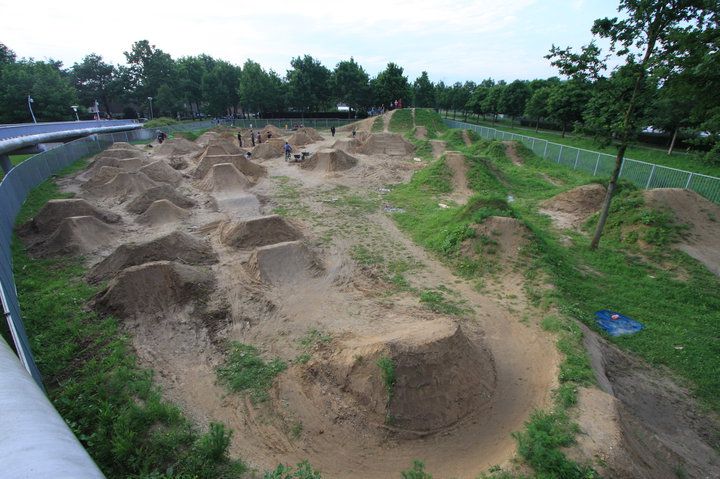 Only two lines remained the same, the big ones on the left when you roll down the starting hill. Everything else has changed. A new line was built for the resi jump (to be finished) and the three tables were moved to the right. A little kicker jump was built last night for the long distance contest and a little kid already jumped 10 feet on it. Looks promising for Sunday. The jumps on the way back are almost done. They need some packing and testing so come ride your bike and bring the shovel to fix the damage. It will be a good challenge to
Read more
Scene Reports 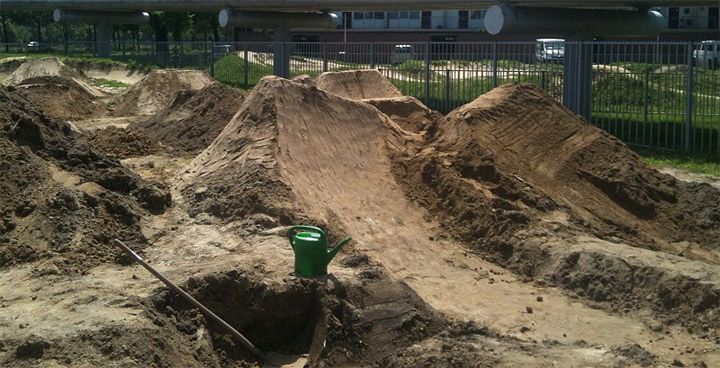 Locals have been working on some new sections at the Helm Trails in Helmond. With the help of new dirt and a digger the makeover was kicking off. All week the Helm Trails will be open for practice and maintenance from 17:00hr - 19:00hr so come check it out before the Open Dutch Dirt BMX championships will take place on June 13th. Here are a few pics from the Helm Trails blogspot. Looks promising.
Read more
Scene Reports

Welcome to China. By BdJ 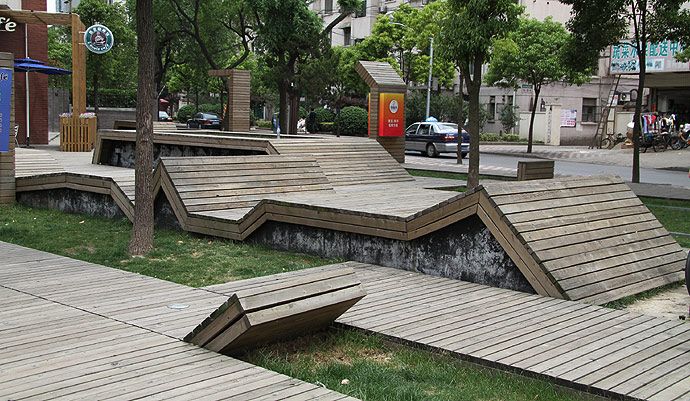 The internet is a great thing, but being on the road it doesn't always work out the same way as back home with the high speed connection. It's not only the connection in China that is slow, it's also the sites that they're banning. No Twitter, no Facebook, no Vimeo and also no Youtube. That's the reason I haven't been able to post clips up straightt away that you guys sent in. Webmaster Jos is helping out though so don't worry. I said China? Yup.
Read more
Scene Reports 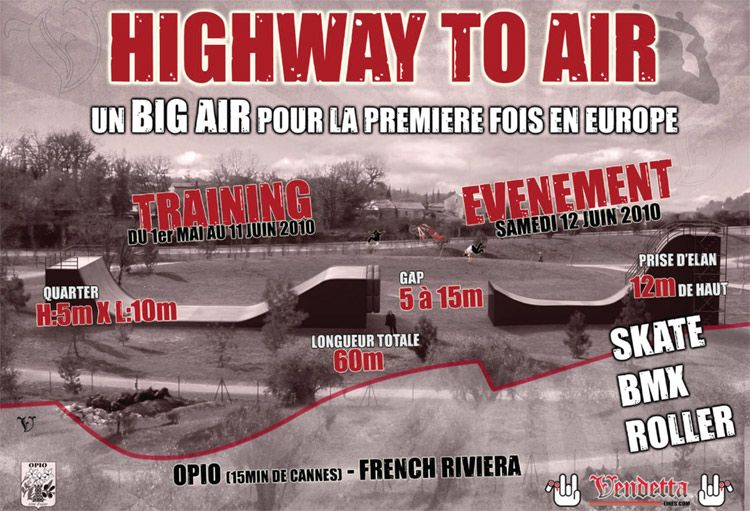 Vendetta-Lines presents: HIGHWAY TO AIR The first European BIG AIR 12 m high, 60 m long, 10 m large, quarter of 5 m high, Gap adjustable from 5 to 15 m. The structure will be installed in the leisure park of Opio (06) during six weeks. From the 1st of May to the 11th of June 2010 the BIG AIR will be open for training and photo shoots for all riders (Pro & Am). This training period will end on a high with our event on the 12th of June: Multidisciplinary demos and sessions: SKATE, ROLLER, BMX.
Read more
Scene Reports 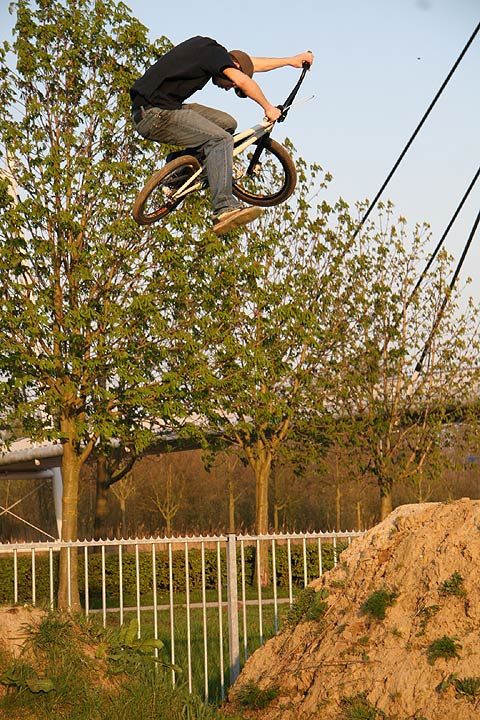 Last night we made it over to the Helm Trails for a little session. Some changes have been made to the set-up and in the days leading up to the jam date this Sunday, a few more changes will be made. The weather has been super nice to ride so that's what happened yesterday too. Govert Schonewille showed up with his posse from America, Schep was there, Dimitris, Mike of course and a bunch of locals hung out at the bench. Off the streets, but at the trails. Don't know what's better actually. Dennis Keunen threw his first ever flips over bigger doubles. Doing them all the time at 040 during the winter has sure helped. Dimitris was going higher than everyone. He's not the one-line fan, but he made up for it by going to the moon and back. To all riders out there who want to ride the Helm Trails, this Sunday is the day. First Helm Jam in 2010. The next one has already been planned for 13 June. Some more changes will be made before then and also the Resi might be done by June. That's the good part about trails, there's room to change them up all the time. Here are a few pics from yesterday. Live action this Sunday. 13h00-19h00.
Read more
Scene Reports

TV at the Flame Trails. By BdJ 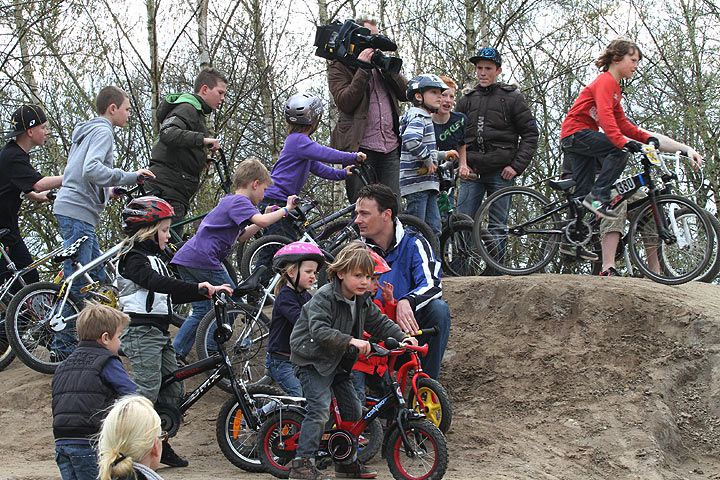 Last Friday the new dirt spot in Helmond Brandevoort was visited by a film crew. This brought many kids and their parents to the pump track at the Kaldersedijk. Four months ago, the place was just a field. After the BMX track was built, it turned into a daily visit for lots of local riders. The smaller kids can take the easy section. The more advanced and more adventurous youngsters can take the bigger track. The place keeps expanding and changes on a weekly basis. Check the photos of the day and we'll upload the clip once it
Read more
Scene Reports 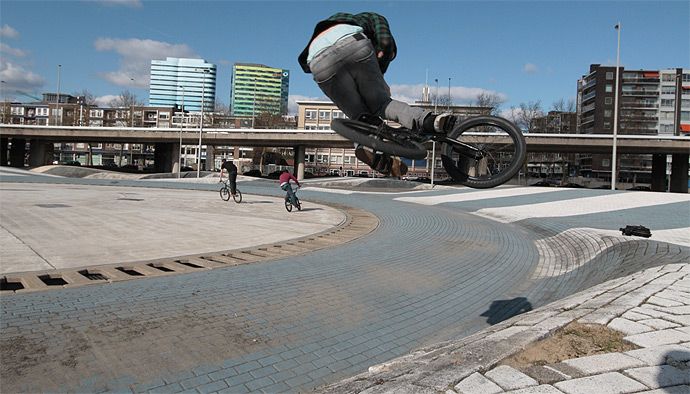 The sun is out, finally. It took a coule of German riders two attempts to ride the street spots in Arnhem, NL. First try it rained, so they had to come back. Locals Riccardo Moes and Rik Jurrius hooked up with the riders and they did a lap around the Arnhem inner city ring and stopped wherever they thought was a good spot to ride. Riccardo shot some pics so for the spot hunters; pay attention. Will Arnhem be the next hotspot?
Read more
Page 26 of 43