Written by Bart de Jong
Read 4507 times
Düsseldorf/Cologne, june 6, 2007. The arrangements for the BMXMasters get up to speed and again many international a class riders have confirmed to compete in street, dirt, vert, flatland and minramp. Four german championships, four world championships and up to now – two successful Suzuki BMXMasters comps – the german bmx scene is established worldwide and pro riders from all over the world came consistently to the Cologne Jugendpark to enter the BMX competitions.
Read more
Reviews

Written by Bart de Jong
Read 5678 times
The Grounded BMX dvd had its premiere in Aarle-Rixtel last Sunday. With OJA all set up for the premiere with a bigscreen and all that, the people who did show up were absolutely ready for it.

Kay Clauberg, Andy Zeiss and Benny Paulsen made it over from Germany as no Grounded premiere is planned in that little country of theirs. Most riders stayed after the Tour Dur Laarbeek to watch the video and at 9pm the Play button was pressed.
Read more
News

Written by Bart de Jong
Read 3445 times
The 3 Backyard digger stops for Germany have been announced. This upcoming weekend (8-9-10 June) the  Red Bull heavy equipment will visit the G-Spot in Trier to fix up the trails on the Kleeburgerweg. When the trails are fixed, a session will follow on Sunday 3 June. Other spots that Benny Paulsen and his crew will patch up and modify (for the better) are:
-Bad Saeckingen (Murgerweg) on 15-17 June
-Arnsdorf (Gewerbegebied) on 27-29 July

AST Drops In will work with children from the Boys and Girls Club of Cleveland. As a way to introduce them to action sports, the Tour will provide donations of equipment, with support from Mongoose BMX bikes, along with funds to incorporate action sports into their daily activities.
Read more
News

Written by Bart de Jong
Read 2631 times
The winner for the LEVI's Road Fools Rock-n-Roll Tour Roadie Contest is...Kyle Ramsden of Spring Green, WI...Kyle is extra lucky...since he lives fairly close to where we are starting the trip...he gets to go on the entire Rock Tour instead of just the first three stops...When called about his winning the Roadie Spot the only thing Kyle had to say was: "Oh My God."

My guess is he might repeat that statement when he rolls up to Detroit in the Props Rig to pick up 17 of the best riders in the sport for a ten day road trip with the likes of Lucero and Thunderlip...
Read more
Freestyle 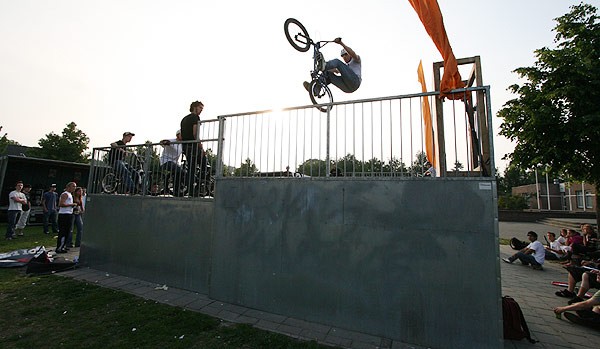 One more ramp was waiting for the Tour Dur Laarbeek posse, the one with the extension situated on the Bosscheweg in Aarle-Rixtel. After the three stops earlier in the day the final stop had lost a bit of its energy but Leroy Keunen made up for it on stage. His band did not want to leave before he saw a pit. He did get his pit and people from out of town were wondering what was going on here.
Read more
Freestyle

Written by Bart de Jong
Read 2572 times
Looking back in my daily journals over the years, here is one of my old journal entries and also my comments looking back now: Sponsored by GT BMX October 15th, 1993

-Actual Journal Entry:
“I Rode to work at GT. During the day, I had a meeting with Todd Huffman & Big E. Huffman liked the proposal that Big E gave him about me riding a Fueler & me being sponsored by GT. But Rich Long (owner of GT) is out of town ‘tll next week. So I won’t know for sure until then. He said I could put the bike together and “test” it. So I stayed until 7pm building the bike with Big E.
Read more
Freestyle

Written by Bart de Jong
Read 3133 times
Dennis and I overtook the Tour Dur Laarbeek stage on the way to Beek en Donk. The tractor wasn't moving fast and it even had to be bump-started every time it needed to fire up. It didn't have a lack of people who wanted a ride on a real tractor though and the seats on both fenders were full on every trip.

The plan was to start at 4pm and we had made up some time and were only behind on schedule for a few minutes. A nearby festival ended at 4pm so that was good planning on Mike Smits' side. Some music was played so people noticed there was something going on.

As soon as the band started playing they were tested on how long they could handle it. Good stuff. Kees even joined the local band for a Minor Threat cover and received a big round of applause and a straight edge Bavaria beer for his efforts.

Rick Thorne stars in: Keeping Up With The Jonesers

Written by Bart de Jong
Read 6689 times
World famous BMX rider Rick Thorne stars in a new 23 minute short film called Keeping Up With The Jonesers premiering on Showtime Extreme at 4:20 June 6th. Rick plays a drug dealer and reprobate who gets a lot more than he bargained for when a deal goes wrong. A trailer can be seen by clicking here.

We are having a party at the Standard (Sunset) June 11th at 9pm to celebrate this premier. Rick will be there.
Read more
Page 4645 of 4925