What do you do to make this a Bizznizz interview?
Leland: Well Bart, first of all I sleep until noon, first thing out of bed, I put my hat on, then make a pot of coffee to start the day... sit in front of my computer in my underwear until about 3 or 4, checking e-mails and whatnot, making sure things are getting done, you know, real business stuff.

Then work on what I can work on, orders, shipping stuff, repairing my house until, maybe squeeze in 2 or 3 sessions at the skatepark a week. Then about 10, I go into my real job at UPS. Work until 6a.m. and wake up and start the whole thing over again. Monday thru Friday type shit. Something I’ve noticed about life; You know your growing up when you start living for weekends… 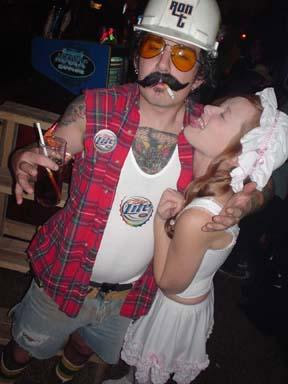 When did it all start?
Leland: That’s a hard one, hmmmm, well it all started with a series of events that spanned over a 4 year period, freak accidents, plenty of injuries, my car getting broke into, bells pausy (cranial nerve infection where I lost feeling in my hands and my feet), my girlfriend dumped me on valentines day, all sorts of shit. The list goes on and on. Then final straw was when I was on a roadtrip by myself to New York, my car stereo got stolen 6 hours into the trip, I had a broken arm, and had to drive back home 16 hours in a snow storm.

How far have you taken it from printing a couple of T-shirts to where Shitluck is today?
Leland: It all started as a joke. I just thought it would be funny to make some shirts and everyone liked them so kept making them. Now it’s a full functioning business. I got a checking account and everything. I went from having a few boxes in my living room to a living room full of shit, we have 2 screen printers, 2 video cameras, new computers, and we just bought a '98  450-powerstroke mini bus for our team travels. I’d say we’re doing pretty good for a shitty t-shirt company. It went from sitting in front of the computer, drinking beer with Tag, making stupid t-shirts, to actually having to get up everyday and doing real work. Which is wearing sometimes between juggling my house, my job at UPS, and a social life, but that’s life and I’m happy with it.

Is Shitluck a reason to form a team and go on road trips?
Leland: Yes, of course. Tag and I are getting older, we’ve got to do something to keep doing what we’re doing and I’ve had a good time doing it. We’re not ready to quit living the bmx dream. So what better way to express it, than to share it with the next generation. Hoping they get from BMX what we’ve gotten from BMX. And just watching them live it. I love my team, they’re the best. That’s what mainly keeps me going. If I don’t work as hard as I can that means no money to have fun with… 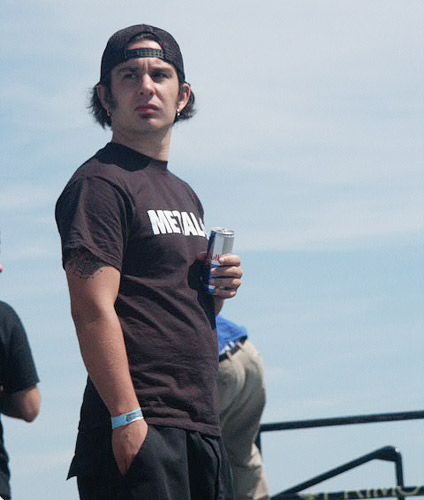 You seem to be on the road a lot, is Shitluck's team budget running dry?
Leland: I try to be on the road as much as possible but with getting older comes more responsibility, I’ve got to work on my house, I have to do the real 9 to 5. so now days vacation is limited so I have to space it out over the year. Hopefully one day I won’t have to worry about money and just do what I do. Tag and I don’t even really pay ourselves. All money goes back into the team and company. We don’t do adds so that’s a big bill right there. We’ve just now been able to give ourselves a little bit from video sales, but not enough to equal out the work we’ve been doing for the last few years. But really, I don’t give a shit.

What do you do in a situation when you're broke and are far from home?
Leland: Be as roachy as possible. I’ve seen Metro and Bugsy collect cans for food. I can’t even count the number of camp sites I haven’t paid for. Do what you have to do to get by… that’s not really a problem now days with working at UPS. Over paid and underworked. Spend it like you got it… hahaha.

Who are your current distributors?
Leland: Damn! There’s a lot now days… 4Down in England, Original Flava, in France, Unitedwestand in Australia, Z.E.N. in Japan, BMX direct in South Africa, 1664 in Canada, Dirty Dogs in Germany, Blackout in the U.S., Dark Riders in Greece, and we just picked up SC in the Netherlands, and are working on a distro in Spain.

What products do you make?
Leland: Mostly t-shirts, sweatshirts, girls panties, hats, and we just came out with our first video. 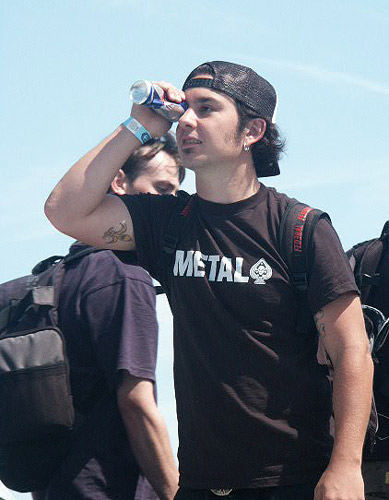 Who helps out on the business side of things?
Leland: I do all the talking and Tag just holds the ship together… without him I would be a fucking mess… he’s a bit more organized than I am but I talk better shit. We kinda even each other out. Tag worries about the video shit and I usually do the orders and e-mails and shit.

When's your next trip?
Leland: We just bought a mini bus, we put it in the shop for veggie diesel conversion on the 2nd of July and then it's on… we'll probably stay on the road as much as possible until the next video is done. New York is our first stop and who knows from there. Hopefully we have the video ready for Christmas.

Do you feel you've chosen the right name for the company?
Leland: FUCKIN – A!