I’ve met Julie through internet on some BMX message board, she was living in Paris at the time. I invited her to come over to Nottingham where I used to live to attend the winter UK girlz jam in Thornaby. Julie has this motivation and enthusiasm about BMX that makes her eyes sparkle when she talks about her projects. She was working on the organization of the Rid2z event 2005, 3rd edition, and especially the BMX part of the comp. The 2 first editions were disappointing BMX-wise with only 3 girls the 1st year and 2 the 2nd year. So Julie took things in hand and decided to motivate more girls to come and more sponsors to support. With so much energy passed on me with this encounter, I couldn’t do anything but to help her a little bit, especially the flatland part and the English-speaking bits. Rid2z event is the competition organised by the French association Rid2z and aims to promote and develop extreme sports for the ladies. 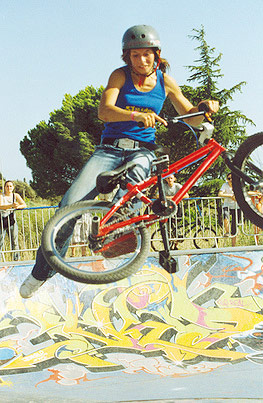 This kind of initiative is pretty new in Europe, and pretty rare, but girls deserve more support, more coverage and more respect in what they like and what they do, BMX riding. Things are slowly starting to change, to be shaken up by some passionates and the movement is growing. Motivation and confidence are the key to unlock girls potential. The Rid2z event along with other initiatives (UK girlz jam, more girl classes in contests, web sites…) allows girls to get together and to share their passion and energy, renewing a sense of community and pushing them to their limits.

So the event got organized, invites were sent to many girls, information about the comp was communicated to magazines and web sites, trying to pass on our energy and enthusiasm.

The comp was held on Saturday the 13th and Sunday the 14th of August at Grammont skatepark in Montpellier. On Wednesday evening, I left England i 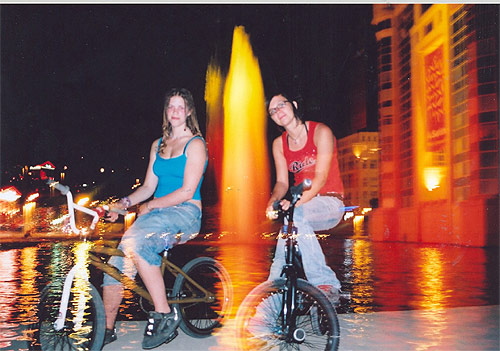 n company of Val, a London girl rider I met on Ride UK forum. Driving all night long. Stop in Dijon on Thursday, small break in our adventure to rest a bit, meet up with some locals and see my family. On Friday, we headed up to Montpellier. Sun sun sun, hot temperatures, need more sun cream. Lazy session at the park where we joined Julie, Anne from Toulouse and another Julie (B.) from Gap. Many other girls were already there, on skateboard, streetboard and rollerblades. During the evening and part of the night was held a meeting with the entire organisation to discuss the various problems at hand (threat from the association running the park to cut out the electricity during the comp…) and to distribute the prizes from the various sponsors. Julie worked hard to promote the event and it paid off: one year sponsorship by a BMX shop, a frame, a complete rear wheel, tyres, clothing and other stuff were all allocated to the BMX comp. But first disappointment, the flatland sponsor let the event down, couldn’t support us, but forgot to tell us so. It was too late for a back up plan, then the flatland comp would only have some clothing as prizes. 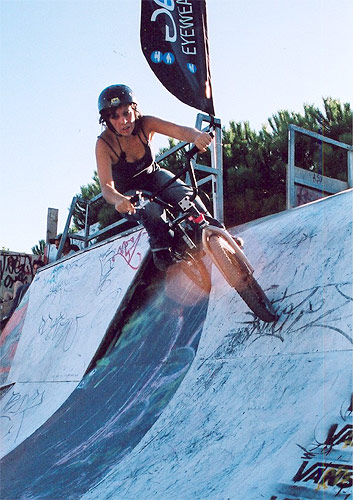 Saturday was the practice, initiations and qualify day. Arriving midday, I had the surprise to learn that I was the only one in flatland, no other girl showed up. Another disappointment. I didn’t put enough effort and energy in the organisation; France has a good flatland scene and many very talented ladies, too bad no one could make it.

The BMX practice run gathered 7 girls for the street comp, it was for most of them the first time they rode in front of an audience and photographers, a good challenge.

A flatland demonstration was also organized that day, with Manu Massabova, Nicolas Ferrando, the Psychien Crew and…me to introduce it to the public.

Later on, we went with the locals to the ghetto park of the Destroy Jam, watching the locals riding, chilling. Ended up with Anne, Val and the guys queuing to get into a bar, but only the guys could eventually get in, the girls and I were too dusty, sweaty and smelly from our day of riding under the sun. Blah! So we took the bikes out of the car and went for a night photo session, nice!

ON Sunday, things got serious, it was comp day! 9 ladies on BMX, two more were expected to enter the comp but got injured recently…bad luck. The pressure of competing and riding in front of many people was on. Three jams of 3 girls each were on for 3 minutes. Sonia and Anne from Toulouse and Mel from Paris were first. Sonia also entered the skateboard comp and despite being tired and having an injured wrist she rode really well with nice aerials and a smooth riding. Mel, on her bright yellow brakeless bike that weights tonnes (I heard she changed her frame since!), tried quite a few fakies and some ice pick up the quarter. At first she was shy and did not dare to try stuff, but once she started, she would not stop and the speaker almost had to ask her to get off her bike! Anne did not want to enter the comp at first, she wasn’t feeling like riding under pressure, but the prospect of winning a nice glamorous pair of sun glasses changed her mind. With the support of the public and of the other riders, she overcame her apprehension and pulled some nice fakies and footjams to rollback amongst other. 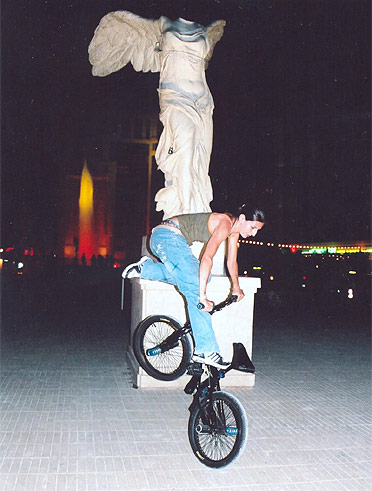 The next 3 girls on were Lia, a local that begins in both street and flatland, Agnes from Paris who also competed in the streetboard comp, and Val from London. Both Lia and Agnes had the guts to enter the comp while they’ve just started riding a couple of month ago. Val was more comfortable, Prodigy was on, boosting her energy and determination. She also tried a few fakies, seems to be some fakie mania going on in Montpellier! She did some nice aerials and a few one footer over the pyramid.

The last 3 on were the two Julie, from Toulouse (Q.) and from Gap (B.), and me. Julie Q., although very tired by all the organization part (sleepless nights, stress…), was doing very well: fakies of course, nice aerials, wall tap in transfer… Since the UK girlz jam she progressed a lot and seemed more confident on her bike, showing a very smooth and flowing riding. The other Julie was just amazing! Only 16 years old but such great skills and a huge potential: turndown in transfer, huge aerials, one foot cancan…Everyone was stoked to see that!! Flatland was represented by me, but unfortunately I am not a good representative and the dusty concrete didn’t arrange anything: attempts of spinning BWD steamroller to mc circle and of decades and that was most of it.

A best trick comp was then held in the graffity decorated bowl. Julie B. showed us once again the extend of her skills: condor, no foot cancan out of the bowl and a few close attempts of tailwhip off! Val got off the bowl with some no footer and one hander while Julie and Mel rode it smoothly. The rest of us just sat down and watched, yelling words of support.

At the end of the afternoon, the results were announced. Without surprise, Julie B. got first. The judges couldn’t decide between Julie Q. smooth riding and Val big tricks, they finished both 2nd. Sonia got 3rd while Anne finished 4th but didn’t win the sunglasses she wanted. Agnes and Lia got 6 exaequo and Mel 8th. Flatland, unsurprisingly, I finished last…and 1st!

Time for all to say goodbye and to hit the road, although we would all have loved to stay there fore a little while, riding, chilling…out in the sun. Back in England, it was cold and rainy. Blah!

Thanks a lot to Julie and all the girls at Rid2z for pulling all this together despite all the troubles they encountered. Thanks to all the girls who made their way to the comp, was good to meet you up. And thanks to those who supported the event, sponsors, friends and family. Hope to see many more next year!