Today at the LG Action Sports World Tour, we wrapped up the bike events with BMX Vert Finals.  It was a windy day at Dance Valley.  Maybe it was due to the loud techno-dance beats and the thousands of dancers in attendance.  BMX Vert is a very dangerous sport, and these athletes put it all on the line today.

Since this LG stop was in Amsterdam, I expected most of these guys to be out late last night, but I’m happy to say these professional riders stayed in.  These guys had to fight the wind, deal with the headaches from the loud music, and put together at least one good run to place well.  Here’s what happened… 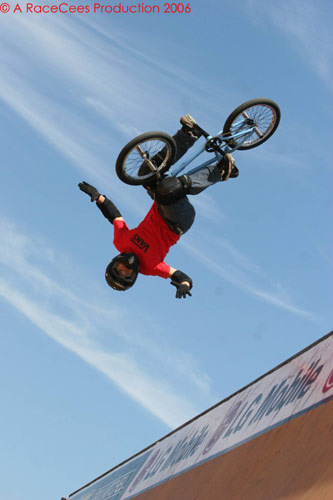 10th place--  Tim Eichert--  His second run had some problems due to the wind, but he managed to fire out a no-hander, a 540, and a flair in his first run.

9th place--  Mike Mancuso--  Mike should be used to crowds like Dance Valley, since he’s spent plenty of time on the Warped Tour.  Mike also wasn’t a fan of the wind, but that didn’t stop him from going upside down a few times.  Flairs and no-handed flairs. 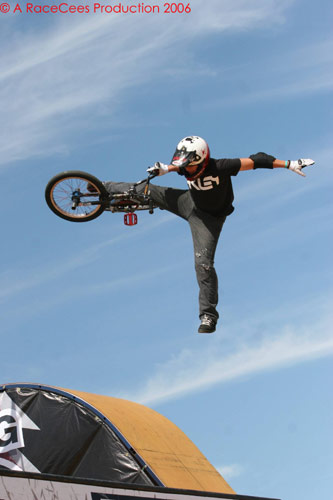 7th place--  Jason Branham--  Jason is a young guy and I don’t think he’s ever been to Amsterdam. I didn’t see him at a coffee shop but still, he went pretty high.  No handers, barspins, 540s and flairs.

6th place--  Eduardo Terreros--  Eduardo is a little guy, and he goes really high.  So the wind has a strong effect on him.  Eduardo had a couple crashes, but got right back up to show the wind what was up.  Huge airs, no-handers, barspins, tailwhips, and 540s. 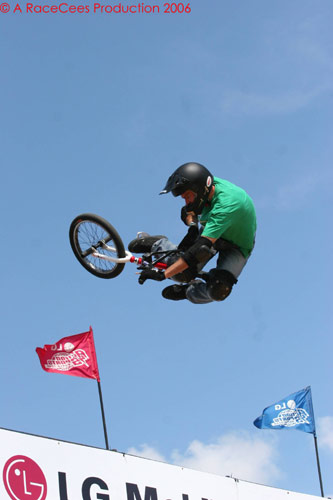 5th place--  Koji Kraft--  Koji is no stranger to the LG contests.  This kid can dance, but I don’t think he cares for the music at Dance Valley.  Lots of energy in each run, and usually two or three variations in each air.  Koji also used the wind to his advantage and pulled a perfect double tailwhip.

4th place--  Matt Fairbairn--  You have to watch this guy.  He sneaks in some big tricks when you least expect it.  Big alley-oop 540s, tailwhips, and a perfect X-up to double barspins. 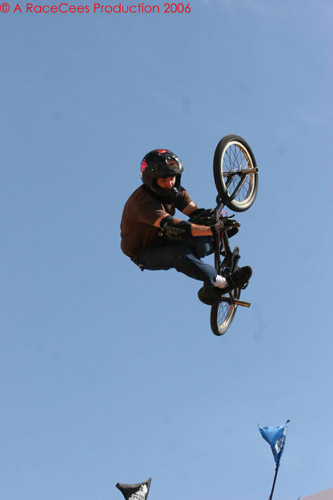 3rd place--  Zach Shaw--  Zach had some bike problems in his first run, but came back with a strong second run.  He complained about having a headache, but it could have been from the music.  I think he likes techno.  Lots of high flying airs, turndowns, 540s, and flairs.

2nd place--  John Parker--  I bet John is a good dancer, because he’s got some moves on a bicycle.  This LG rider goes really high, but I’m sure it’s not from the coffee shop.  Big no-handers, tailwhips, down-side tailwhips, a 540, and a flair. 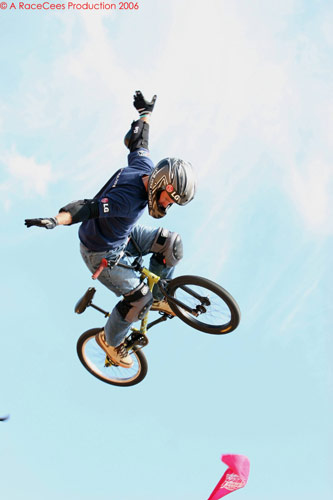 1st place--  Simon Tabron-- I’m sure he called his wife on his LG mobile phone to tell her the good news.  He probably told her that he went dancing all night at Dance Valley and still managed to do some big tricks in the contest, like:  inverts, no-handers, 540s, an alley-oop no-handed 540, a flair, and a 900.

Well that wraps up the BMX Vert Finals for Amsterdam.  Everyone rode well and no injuries make for a successful weekend.  A big thanks goes to: all the riders, all the spectators at Dance Valley, and all the friendly people of Amsterdam.