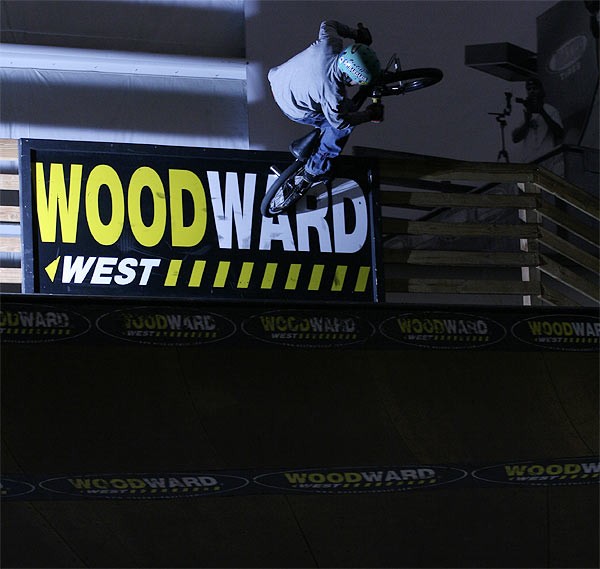 Working at Woodward seems like a dream. Lloyd Ramsay met up with Shawn Dorton and had a talk about what it's like to work at ramp heaven.

How many years have you been working at Woodward for?
I started working for Woodward in '95...the summer I turned 18 and was old enough. I came out to Woodward West in '03.

Is it true that your green helmet is older than most of the campers?
Absolutely. A friend of mine brought it out to me while I was a camper at Woodward in '93. I've used it ever since...and have replaced the padding about 6 times. I actually have one original pad and one original rivet in it. 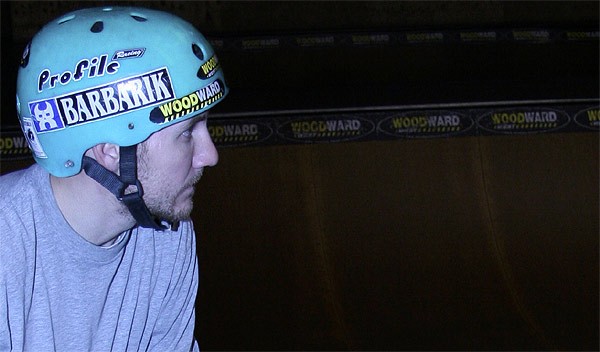 What's the strangest thing you have seen happen while working at Woodward?
Besides the "Shane Saw?" I would have to say the time I showed up to work and saw about 50 bikes perfectly lined up along the porch roofs of every building in the front of camp (Boom Town). There was one hanging like a hammock and even one hanging from the flag pole. That's one of the few reasons why campers aren't allowed to leave their bikes at their cabins overnight. It took me a little while to warm up to the joke, but once I did I took a bunch of pictures and then we played a pretty good joke on the guy who did it. 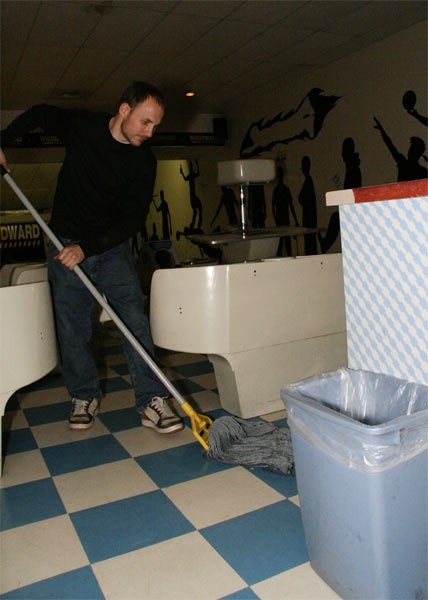 What are your job roles at the camp?
Currently, I am one of the BMX directors during the summer; In the off-season I manage the bowling alley and I'm a BMX instructor for 4 hour-long classes every week; and I work on the bowling machines year round...among other odd jobs like sweeping and mopping the Hangar and gym.

Is it true you once rocked a mullet like an Iron Maiden roadie?
You have no idea. Many people have seen my mini mullet throughout the early '90s, but very few people remember the one I sported in the late '80s. It went down to the middle of my backand was feathered on top. I was so proud of it. 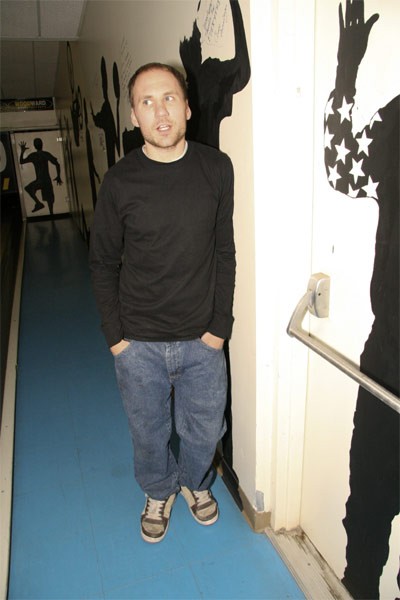 What is the story behind all the silhouette paintings that are on the walls in the bowling alley?
About 3 years ago I started tracing the shadows of BMX, skateboard, mountain bike, and rollerblade pros that come through here. I don't make them wait until I paint them in, but I do have them sign and add a quote to the wall next to their outline before they leave. That way people (campers) know that the pros really were here and I'm not just making it up. Actually, there's no way I could ever draw that well. The pro having to stand still is probably the hardest part.

Is working at a place like Woodward easy by any means?
One of the most difficult parts about working as a director at camp is the hours. I might have to start super early, work super late, or both. But what evens that out is how supportive camp is of my school schedule and whatever else is going on in my life. For the most part, I make my own hours, I'm allowed to work as much or as little as I need to (as long as I at least get the necessary stuff done), and I have a great home with an amazing family to go with all that. 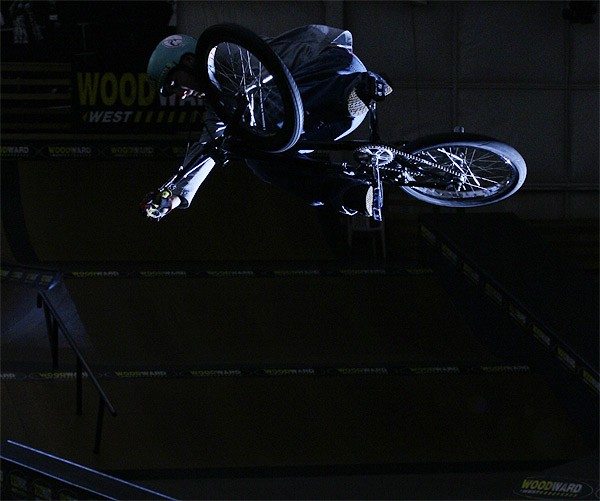 What do you think it is that makes the Woodward camps a great place for riding progression?
Besides all the different kinds of ramps and parks, I would have to say the staff. We tend to always have a great group of riders that come out to ride and have fun. They always get along with the campers really well, which in turn gets the campers comfortable with asking for help with all kinds of tricks. That kind of staff/camper relationship is really important because, otherwise, the point of camp is defeated and we just look like another skatepark. The pros that come out contribute a lot, too, by hanging out with the campers and influencing them positively. That all tend to have really good attitudes.

Ever had any extremely bothersome campers?
Of course! It wouldn't be camp if we didn't. I can't get into that too much, though. Kids are kids, and we're a summer camp. Kids come out to ride and hang out with friends - AWAY FROM PARENTS - so they're psyched and want to have fun...which means being loud, goofy, and sometimes annoying. But we try hard to be tolerant toward that kind of behavior. Besides, the kids that are amazing and really great to have around outnumber the bothersome kids by a ton, so it all works out really well. 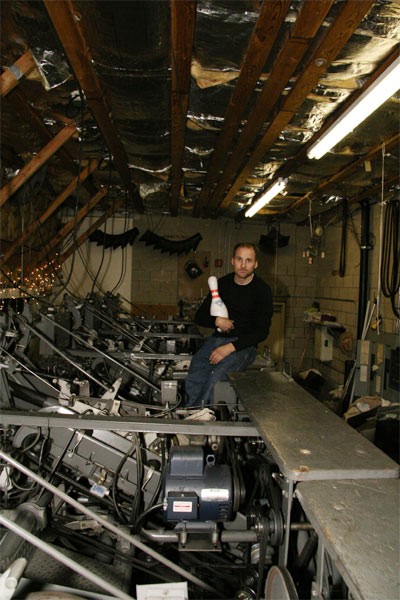 Have you ever got physically stuck in the ten pin machine in the bowling alley? I was there for 10 minutes and that thing is straight out a Stephen King novel.
I actually fell in front of the pins once while someone was bowling and got whacked in the ankle pretty hard. More recently, I wasn't paying attention to the rake while I was running a machine and it swept my legs right out from underneath me, flipping me back and onto the back of my neck and shoulders, then came back to punch me in the top of my head. I seriously didn't know whether to laugh or cry.

Do you live at the camp?
I do. I recently moved out of a room in our hotel that I had been living in for 4 years and now live in a much larger place with my sister. I finally have a kitchen that will allow me to eat foods other than cereal, salami sandwiches, and hot dogs.

Have you ever given that huge gap in The Enterprise another go?
No way. I sometimes think about it, but I'm pretty sure it's one of those gaps that's okay to try just once. Plus, I'd probably not get as lucky the second time around. 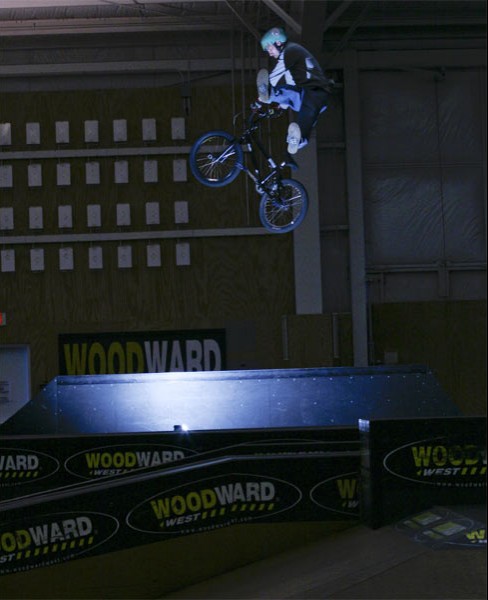 What's the trick to making a homesick camper feel better?
My friend Joey. He was our "Target Fun Director" and was absolutely amazing to every camper. He would drive them around on his golf cart and introduce them to pretty much everyone at camp. Other than that, a lot of times they just need to follow a director around for a half a day or so and realize how much better it is being a camper.

You are currently studying to become a teacher.
That's correct, and it's really scaring me. As I get closer to graduation (hopefully next Spring) I realize more and more that I will soon be more tied down than I've ever been. But working with Woodward all these years has gotten me to realize that working with kids is what I should be doing...so I'm sure everything will work out well for me. 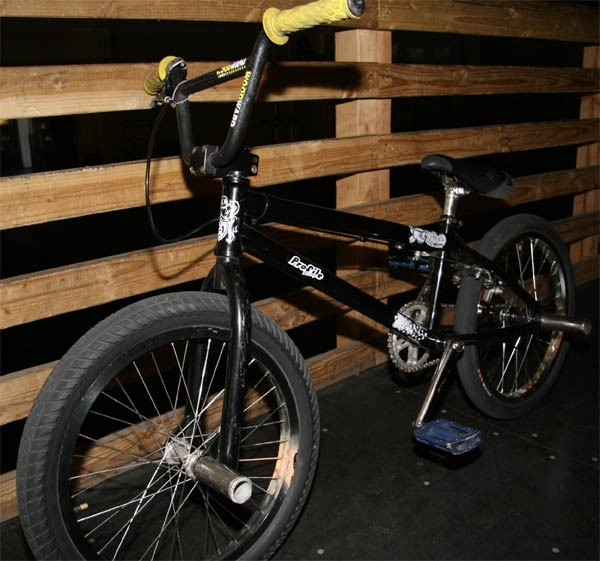 What bike are you riding right now?
I've got a Terrible One Barcode that was donated to me by Joe Rich last year. To go with it I pretty much have the same parts I've always ridden...like Profile cranks, the same Tree sprocket I've had for about 7 or 8 years, and yellow grips. I don't go through parts very often, but when I do, I get a lot of help from various people, and I'm really thankful for that.

Do you think "Action" sports are replacing older more established sports such as soccer or football? Each of the disciplines catered for at Woodward lean more towards the individual as opposed to being just another member of a team.
Sports like soccer and football will never be replaced. It's easy for parents to get their kids started in them, so that's what they go for first. But once a kid is old enough to realize that it's not much fun being forced to play a sport their parents are making them play, and get yelled at every day by their coach or "soccer parent," they're then more likely to turn to "action" sports, where they can be individuals, learn what they WANT to learn, and progress at their own pace.

How much loose change have you guys ever pulled out of the foam pit?
The most I've ever witnessed was around $30. But we've pulled much more than $30 worth of other things out of the pits, too - like iPods, wallets, and watches.

How do you hold on to your sanity being up in the mountains year round?
I don't. But there are ways to help keep me from getting as bad as Jack Nicholson in The Shining. I randomly get phone calls from family and friends that are checking up on me because they know how crazy I can start feeling. I love when they do that. I also recently took on learning Spanish. A good friend of mine introduced me to this #1 rated, 60-CD collection on How to Learn Spanish. That keeps my mind occupied for some time every day.

I would first like to thank Nate Wessel for getting me where I am today. Had I not met him about 13 years ago, I wouldn't have traveled to contests, ridden many trails, or started working at Woodward. He's introduced me to and taught me so much in the time that I've known him. John Rokos was the reason for the best years I ever had at Woodward, PA. He's become one of my best friends and is such an incredible inspiration. He helps me keep a positive attitude about everything and can help me with nearly every obstacle that gets in my way. Debbie Williams for being more supportive of everything going on in my life than anyone has ever been. I wouldn't be able to get through school and life in general without her helping me out as much as she has since I got to Woodward West. I'll always be in debt to her. Richie and Pam for always talking to me about everything and feeding me. Richie for riding with me and making me laugh all the time. Joe and Taj for being so nice to me and Woodward and helping me out with frames; John Povah for helping me and especially camp with Etnies stuff year after year; Ron Kimler tends to always be behind all that stuff, too (thanks, Ron); and Nate again for helping me out with frames, cranks, and all kinds of other stuff that I've never been able to afford. Shane ("the Saw") for riding with me all the time, helping me out at work, and adding comic relief to everything possible. That dude always has a smile on his face. And Ben Kellgren for being such an awesome friend and BMX director. It's always really fun working with him during the summer and riding with him every time we get the chance. His positive attitude is worth so much and I really hope he sticks with Woodward West for a while.