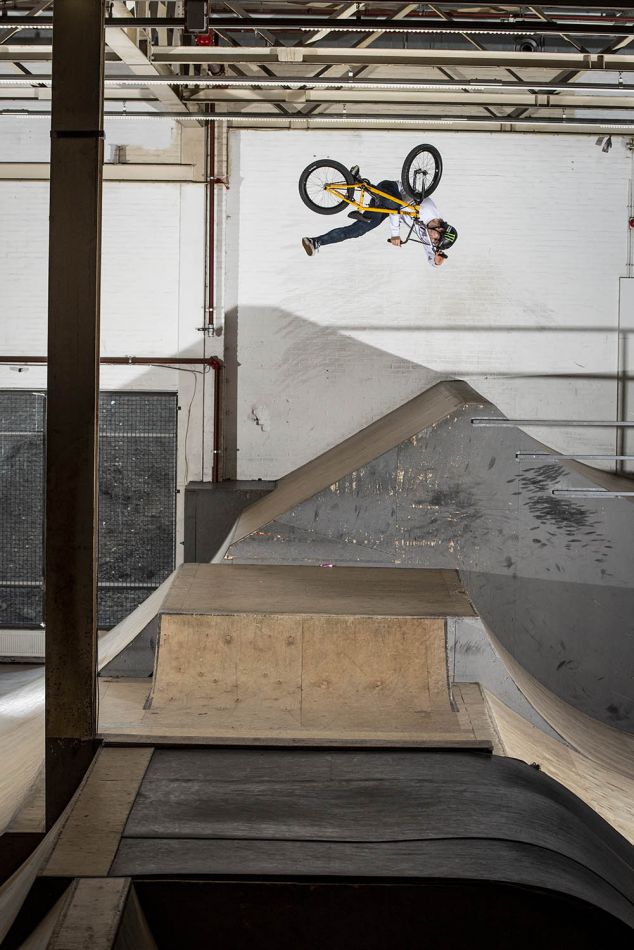 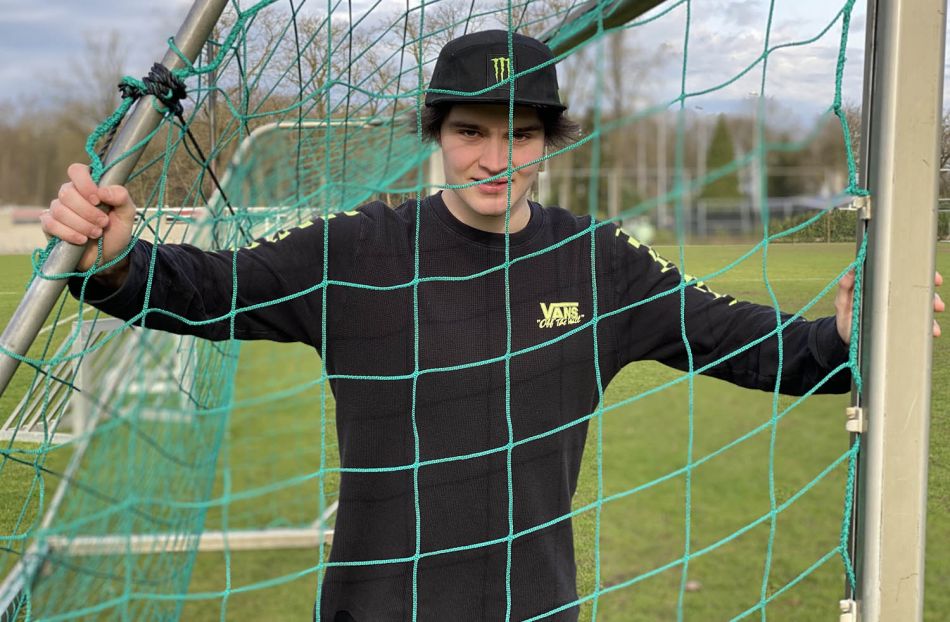 new goal keeper. If that would not have been the case I would have quit sooner. My dad loved me playing football which also made it harder for me to stop. BMX was new for me at that time and my dad wasn’t sure I would continue doing that which I understand but I never stopped riding BMX.

Who were you riding with back in the day? 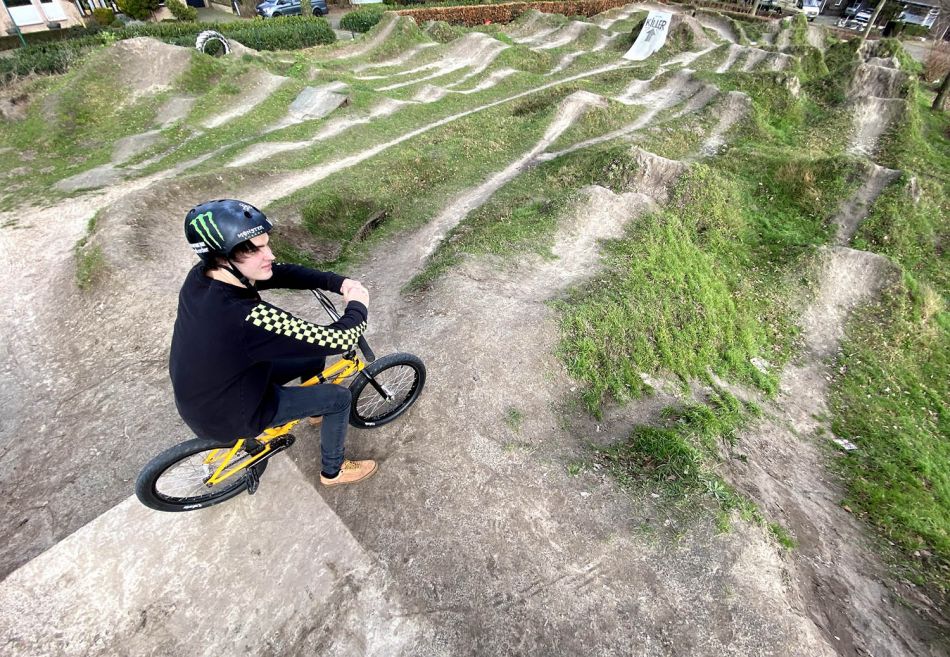 Tom van den Bogaard: We had a little crew with Nick van de Berkmortel, Ron van de Berkmortel, Dennis van de Elzen and Mart Heijmans was still riding back then. Dennis taught me quite a few things in those days. At the Sugar Hills we had the table line and then the line with the tractor tire, and then the line with the big jumps that later turned into the Killer Jump. In the beginning it was more about clearing each line of jumps. Dennis motivated me to jump the double line for the first time. One evening Mart Heijmans dabbed the tractor tire with his back wheel but ended up having a front wheel hang-up and broke his collarbone on the spot. My motivation was gone for a moment to jump the double line. 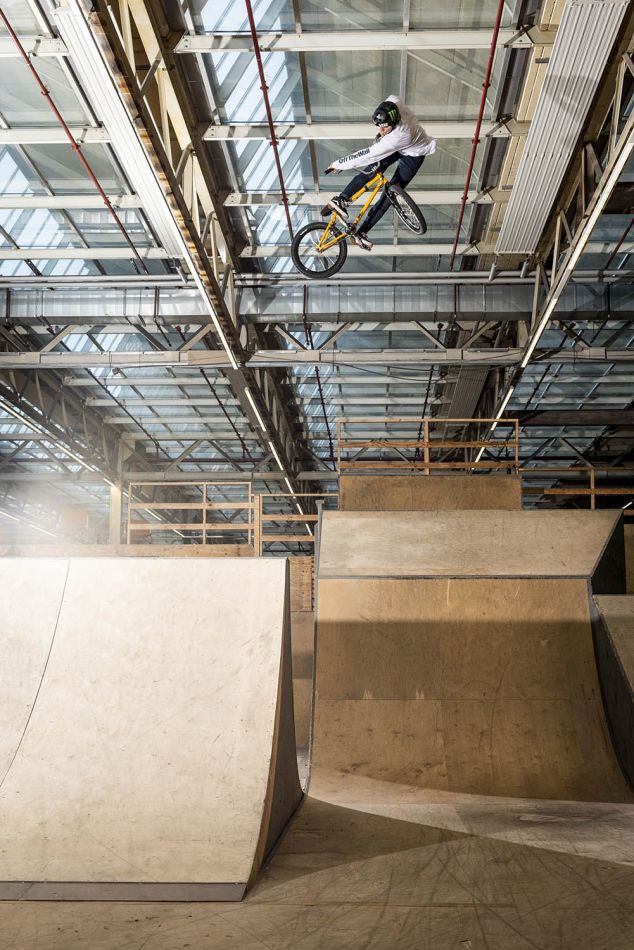 How long did it take for you to jump that line again?
Tom van den Bogaard: I didn’t jump it any more that day but next day I went back and had to do it. At that time if you learnt something, you really wanted to be able to do it all the time. This is also the time when I started riding the local Miniramp. I didn’t like riding mini much in the beginning but as soon as I learnt a trick I wanted to do it again and again to make sure I knew how to do it next time I returned to the ramp.

What spots did you have around you when first started riding?
Tom van den Bogaard: The Sugar Hills trails and the Miniramp in Aarle-Rixtel and the Helm Trails in Helmond had just been rebuilt which we visited a few times.

Did you have a job around that time to make some money to buy parts?
Tom van den Bogaard: Yeah I worked at Verschuren, a local tree plantation. It was the company of Roel’s dad. Roel also got a bike and then my brother also started riding. The tree plantation is where everyone worked on Saturdays. A few hours of work in the cold before the football games on Saturday. I did that for a couple of years. At one point I quit playing soccer, quit working at that place and only rode. 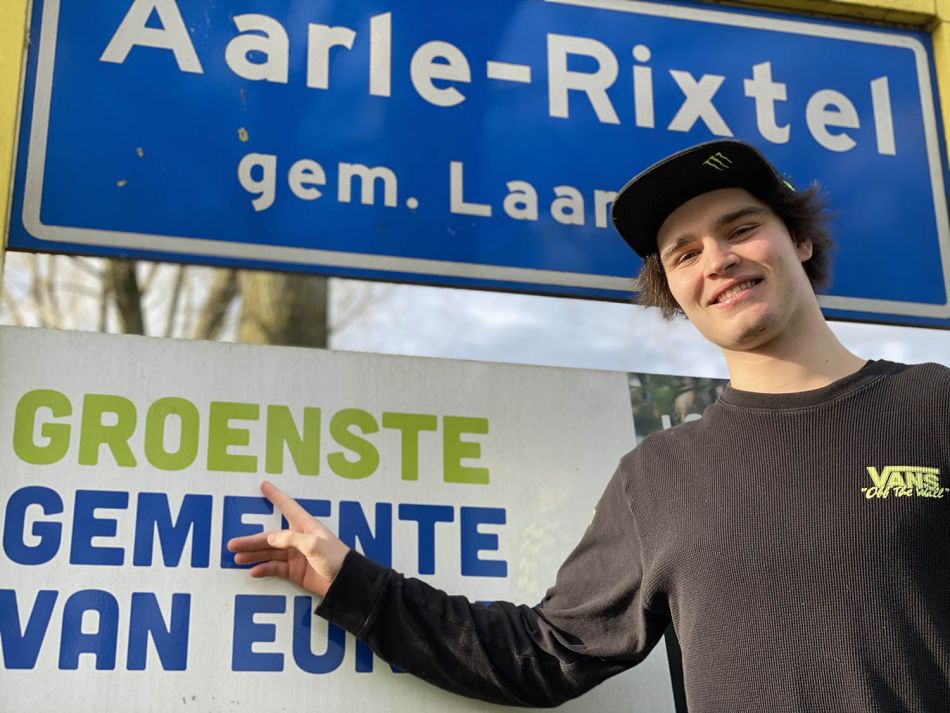 How old were you when you started going to 040BMXPARK?
Tom van den Bogaard: It was around that time when we had that BMX crew, so maybe 13-14. When one of the parents had time to take us to Eindhoven we got in the car for a session at the indoor place which is 30 minutes away. I remember that at one point we rode at the Helm Trails around the time of the ONK contest. Pim van den Bos was shaping the trick line and I was helping out because I rode the place more often and had a key for the place that Mike van de Kerkhof gave me, and at around 18:00hr Pim said he was going to 040BMXPARK. Mike asked if he could ride also and asked if it was okay for me to join. That was the first time for me I went there. After an hour of foam block cutting I was practically the only one riding and Pim said; “Today you’re going to do a backflip in the foam pit.” The foam pit was new and it was the first time for me to hit it. I learnt flips that moment. The first one was all crooked, but on the third one I did a perfect rotation. 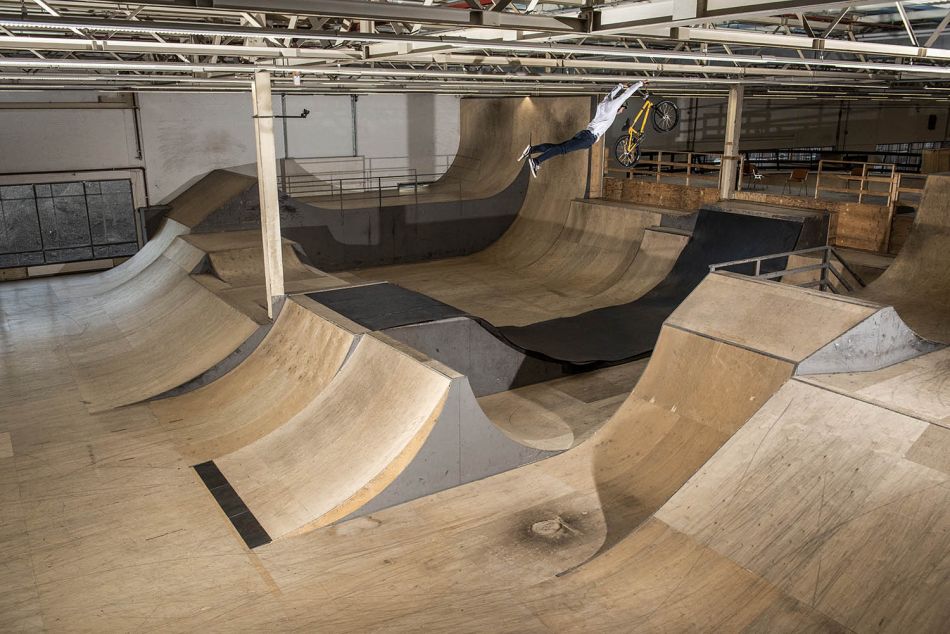 I continued for 30 minutes to an hour to really get the feel of it. I then did it at the Helm Trails on the third jump with safety mats on top. That was the first time I flipped a resi style jump. Those were good sessions at the Helm Trails. I think I was about 14 years old.

When you see the young kids these days progressing so quickly, how does that make you feel?
Tom van den Bogaard: It’s funny to see the big difference in these young riders. Some could ride as long as Lennox Zimmermann has and can’t do anything, and then you have someone like Lennox and he rides just as well as we do. At the Masters Of Dirt show he flipped the biggest jumps and double flipped the airbag which was insane. 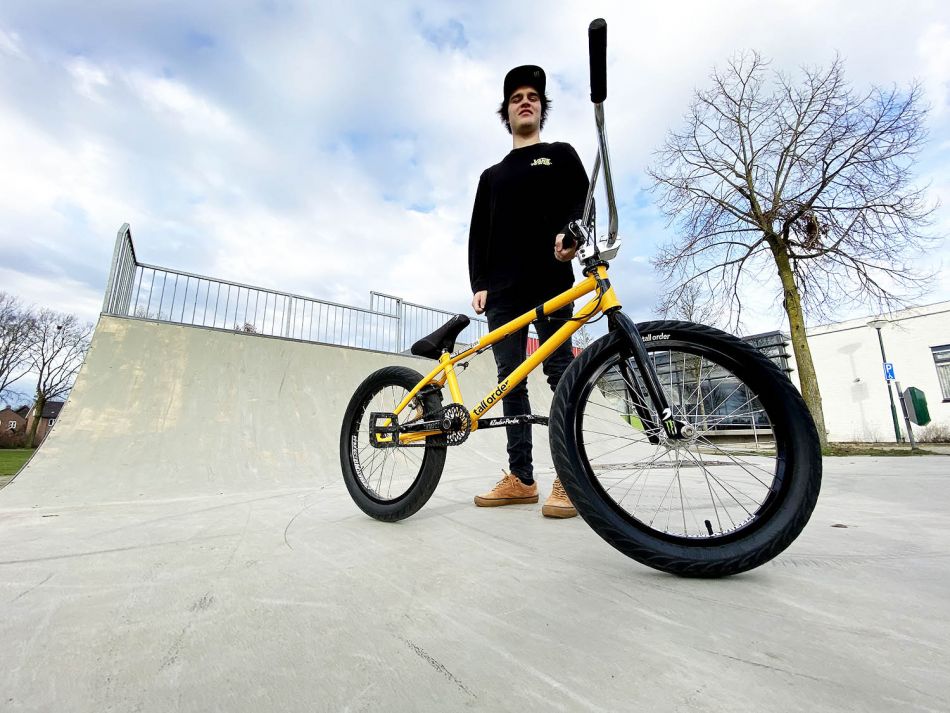 He made it look so easy too on his 18” bike. It’s one of the best things for me to see this kind of stuff, kids progressing on bikes that fit them well. I started off on a 20” bike and could barely handle the 12 kilos in the beginning when I was 12. Having good bikes with 16-inch and 18-inch wheels makes such a difference. I notice that when I teach kids at 040BMXPARK (now Area 51).

You are now teaching kids how to ride during BMX lessons. As a kid yourself you never had that. What did you do to progress?
Tom van den Bogaard: When I started riding Miniramp more often I got to know Timo van Lierop and Steven Görtemöller a bit better. Timo was giving Steven shit all the time because he was riding goofy footed, and I rode goofy just lik 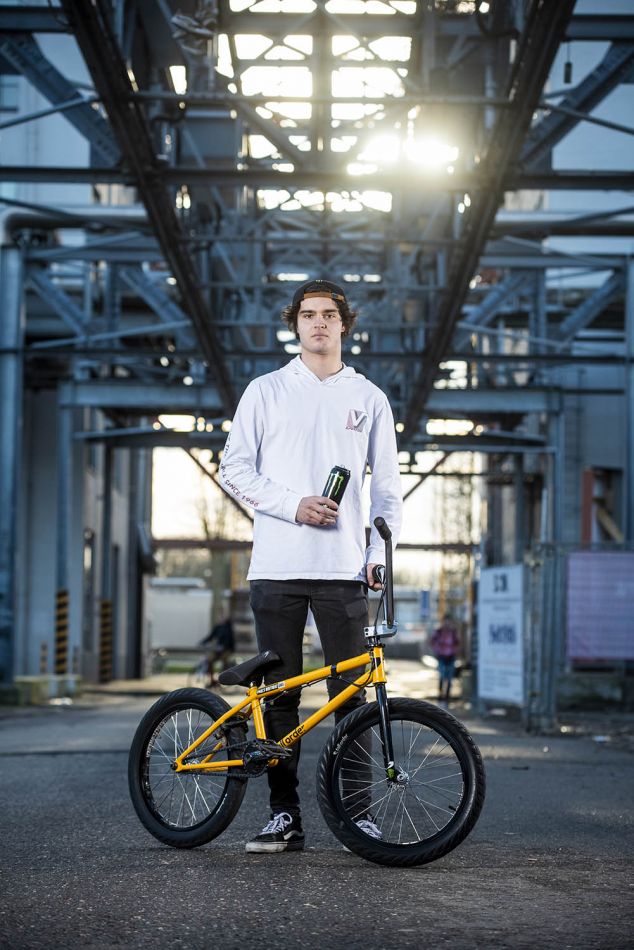 e Steven. At first I had no clue what they were talking about. I just rode in a way it felt the best to me. When I finally noticed what riding goofy footed was, I started looking for other riders who also rode goofy footed. Because of it I liked Mike Aitken’s riding very much, this was after his big crash but I watched the videos of him ripping. I also liked Ben Wallace and Corey Bohan. Those were the three riders that stood out for me. And I believe also Matt Priest rode left foot forward and turned to the left. At that time I could not even do a 360 lookback, I had just learnt how to do a turndown but I liked their style because they rode the way I had my stance and turned.

Because Timo gave Steven shit you started riding differently?
Tom van den Bogaard: No because I couldn’t do it. Funny thing was that Timo was bullying his buddy Steven but not me and I feel he didn’t talk shit on me because I was younger. It really was for the fun of it anyway. But because of those sessions I started noticing goofy footed riders more. 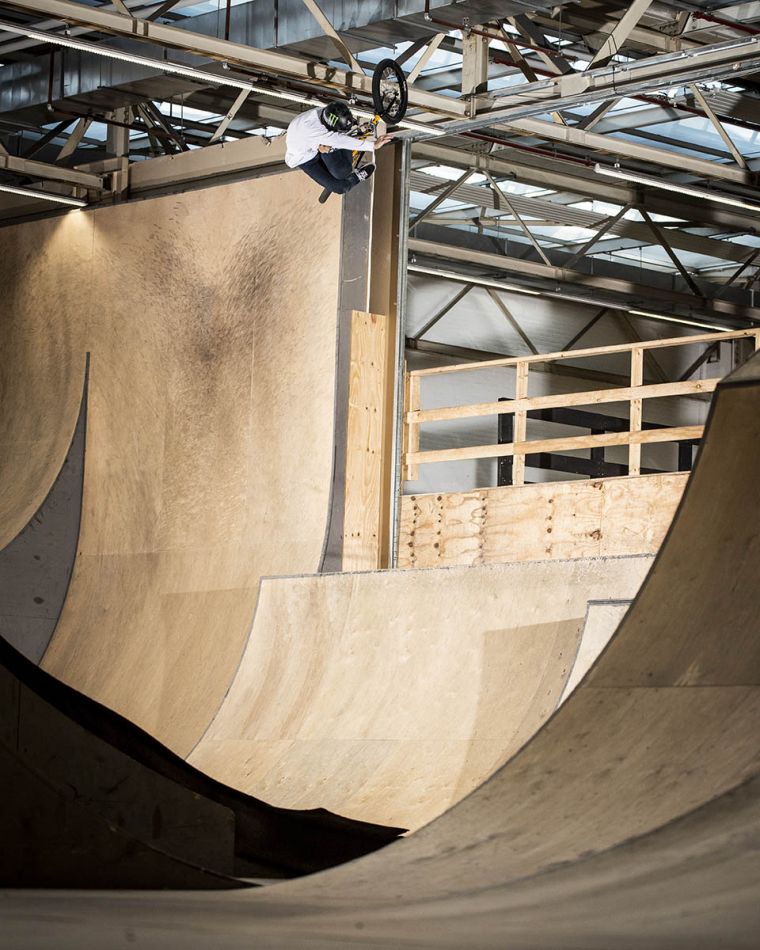 When you arrive at a new park, do you check for a certain way the park flows or can you go left and right no problem?
Tom van den Bogaard: Most of the time the direction of the park is no problem for me. Sometimes you have a run-up that would have been better for my 360 or something but 9 out of 10 times I have no preference in direction at a park. Even on a vert ramp I can turn both ways.

Is riding vert something that you would like to do more often?
Tom van den Bogaard: I would like to ride vert better so it is easier to adapt to all other quarterpipes. I don’t really have fear of heights so a 13 ft vert ramp doesn’t scare me much. After dropping in for the first time the fear disappears and it feels like the ramp becomes 1 meter lower. It’s good for you to ride more vert. It really helps you on airing steep quarter pipes and bowls since it’s the same type of take-off. 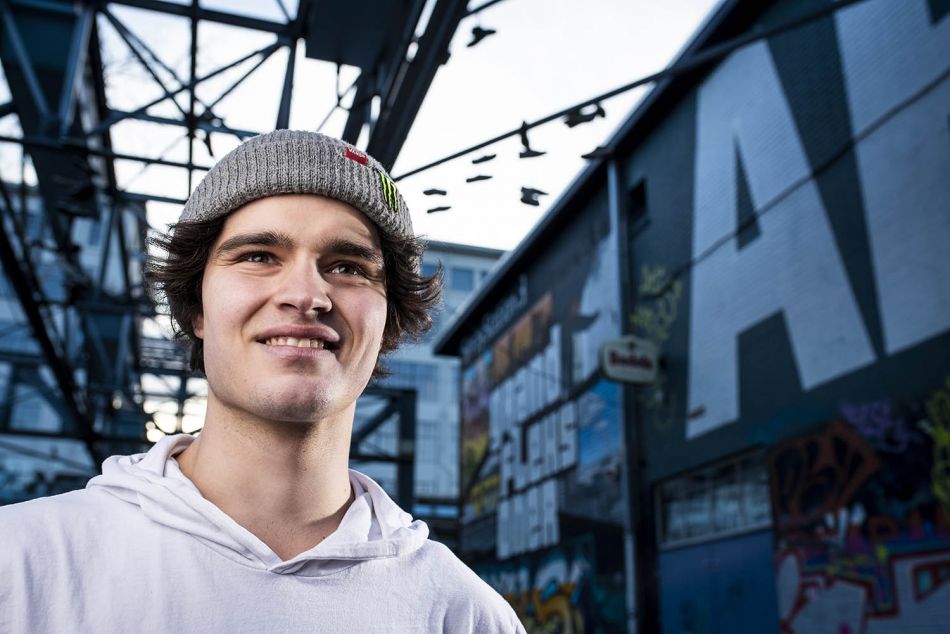 What do you prefer to ride? A session, a jam, Vans Pro Cup, bowl, Park, Dirt, World Cup?
Tom van den Bogaard: I have several things I like. Riding trails is always fun especially because you can’t always do it. 040 is my local park and for me it doesn’t get boring for one reason or another. When I head over there for a session I always have something in mind that I want to try that I haven’t done yet. That means it is always challenging for me to go there. Riding bowls is always good fun because they’re all so different. It feels good when you can just cruise around and don’t have to do any tricks other than turndowns and tables. FISE Montpellier last year was fun, Japan not as much, Pro Cup Australia was awesome, Malaga as well, Germany I didn’t like the bowl a lot but the vibe of that contest in Waiblingen was rad. The vibe at Uncontained was also great because we were hanging out with all riders 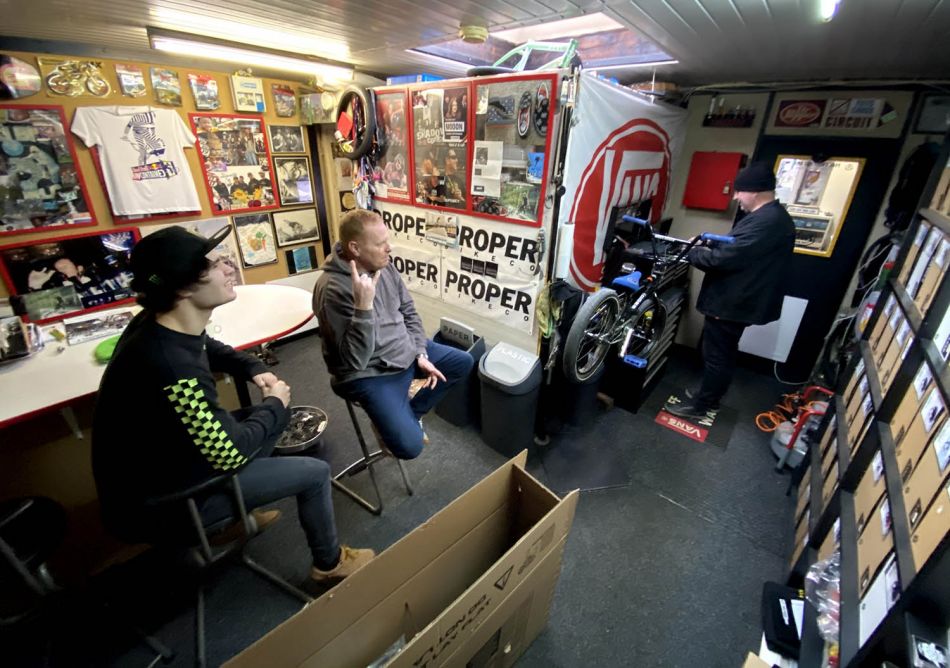 for a week especially Paultje Thölen and Jason Watts made it fun.

I don’t really prefer a jam or a contest. It depends on what’s there to ride and who are there to enjoy it. The Backyard Jam in England was good times. Even if I would have scored low, I would not have cared because the atmosphere was good. It’s always a bonus when you do well of course but that’s not a priority for me. I prefer getting last but have a feeling like I did what I wanted to do, than getting second and think you could have done better if you would have tried harder. I don’t really pressure myself when I ride contests. I would do worse if I would. 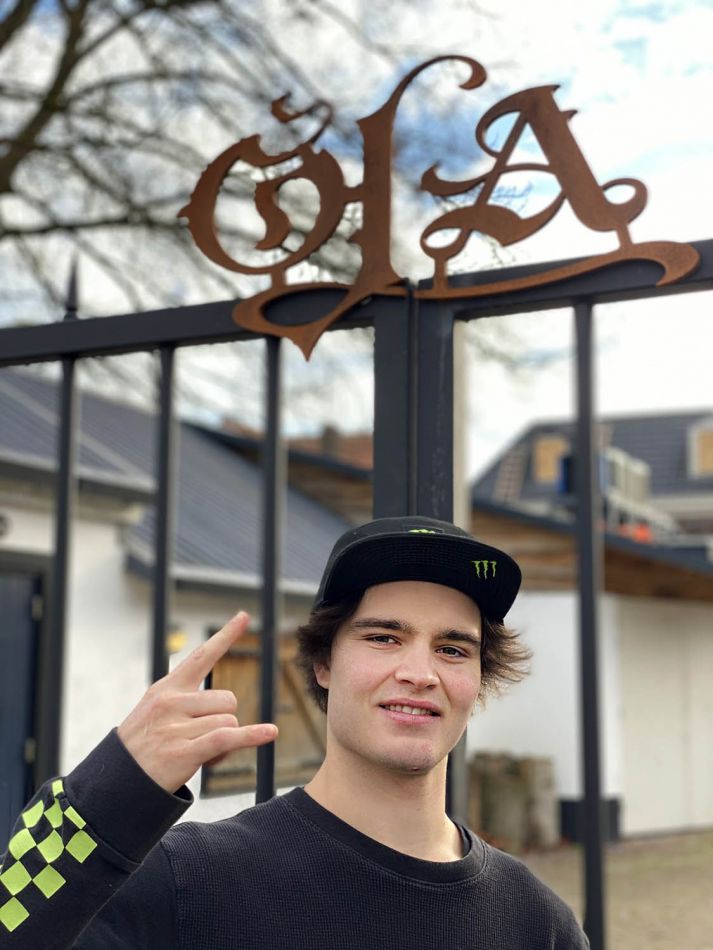 Do you feel any pressure from sponsors now that you have a solid list of them?
Tom van den Bogaard: Not at all. I’m super happy with them. I’m stoked a brand like Monster Energy wants to support me. It’s a big company and they don’t just pick up some riders. It’s not like they have a team of 100 riders. I think there are about 10 riders in Europe being sponsored by Monster. It feels good being one of them.

It’s incredible to see a rider from Aarle-Rixtel who started off riding the way you did who is now fully sponsored and traveling the world riding BMX.
Tom van den Bogaard: I have great companies backing me including Triple8, Vans, Tallorder, Paul’s Boutique and Monster Energy, something I’m very thankful for.