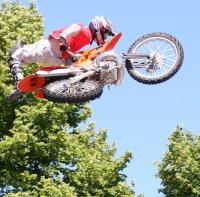 During the LG Action Sports European tour the organization had hired 4 Freestyle Motocross riders and Andy Zeiss on the mic for some good FMX shows. The set up was Jimmy Verburgh's FMX4ever take off and landing ramp and Jimmy himself was one of the riders. Well impressive was Gary Taylor on his 250cc KTM. He stretched everything to the max and gave it all he got. Two German FMX riders completed the field. With three shows a day we had the chance to test the zoom lens of the Canon 350D. Although operated with one hand (with the right arm still in the sling), the pics came out quite nice. If you're not into the FMX thing, skip the gallery. If you don't mind watching some MX riders catching huge air, click right here:
Read more
News 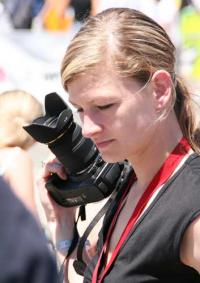 Editorial June 2005 You know what pisses me off? Photographers and video dudes on the course that get in the way of riders trying to do their thing. It's great for an event promoter to show his sponsors how many media he had at the event but how many of these camera dudes do actually make a living taking photos or filming BMX? Do they actually use the footage and pics for something other than their personal files? There are people who deserve the best photo pass possible. Those people are used to the riding on the course and keep their heads up. Others that have no clue, better stay away. There's nothing worse than a rider slamming into an inexperienced media guy and getting hurt. I couldn't care less about the photographer but if a rider has to miss the contest because of an injury (Osato at the worlds) or will be out of action for weeks/months (Clint Millar-UG), that really sucks. There will always be unexpected accidents happening at contests but let's work on keeping the platforms for the pro guys.
Read more
News 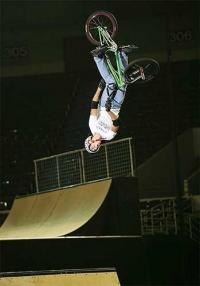 --Scotty Cranmer has been busy doing some stunt work for a Disney movie called Stick It. He spent all last week in CA doing the stunt work for two actors in the movie. It doesn't call him out for being Scotty but he did do the front flip and double whip flip so it shouldn't be too hard to point him out. He found out Friday morning that he did not have any filming on Fri, Sat, Sun and Mon. He was already going crazy not having a car and places to ride so he decided to fly back to NJ, ride for the weekend and fly back to CA to finish up Tuesday. Ben Snowden, Rooftop and Eddie Fiola were involved also. Scotty said Eddie Fiola is still amazing on a bike and does some crazy stuff (for all the youngsters out there, Eddie Fiola was a top dog BMX rider back in the 80's, pretty sure he was the King of Skateparks) --The week before Scotty went to the 1st Dew Tour and got a 3rd, next up is round #2 in Denver July 8th. NBC promised huge amounts of TV coverage on this but all I have seen so far is SK8 vert and FMX.
Read more
News 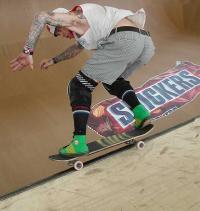 At FATBMX we're not afraid to bring something different, even if it involves skateboarding. During the Snickers Bowl at the Download festival in Donington last week, some true skateboard legends were flown in to do some skating in the wooden bowl. Most of you might not remember names like Kevin Staab, Mike McGill, Duane Peters, Steve Olson, Tony Alva, Sean Goff and Nicky Guerrero but those are some legendary skateboarders who have paved the way for loads of skateboarders that started after them. Being a judge we were on the same schedule as the true pool skaters. We stayed in the same hotel, drank at the same bar, sat in the same bus and listened to the same bands at the festival (Slayer, Megadeth,
Read more
News

The Countdown is running â€“ only 3 days until the start ... -Pro Rider’s Lounge for all participants For the wealth of all participating Expert, Master and Pro riders of the Suzuki BMXMasters in between their runs a comfortable chill out area will be arranged. In the Lounge drinks as refreshments and relaxation will be provided. Opening Party on June 23 There will be a big BMXMasters opening party on Thursday! From 10 p.m. on, there will be Obscure Grooves, HipHop, Funk, Soul, Rock and Pop music brought to you by the Djs Haitian Star aka Torch, Future Rock, Rick Ski and Saim 79.
Read more
News

June 2005: Eastern Bikes on tour in Europe starting this week. 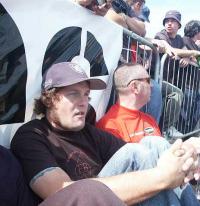 Leigh Ramsdell sent a little info on the Eastern Europe Dragon Tour. The team is heading to Germany on the 21rst to meet up with their German distributor G&S and will ride street in Wuppertal. The rest of the tour schedule looks like this. Try to catch them if you can. 22nd Bochum Trails, Germany 23rd-26th The Masters Cologne, Germany On the evening of the 26th they head out with their French distributor Sun-Ex 27th St-Niklaas Belgium
Read more
News

Press Release Bmxsummercomp.05: The Bicross Club from PortimÃ£o at 09,10,11 of September will organize the "BMX Summer Comp. 05" In the Parque da Juventude From PortimÃ£o.
Read more
News 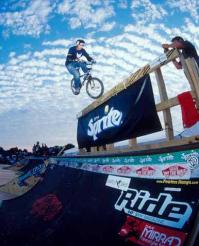 The Best Urban Action on the Common at the seventh annual Sprite Urban Games. Yep, you’ve guessed it, Sprite Urban Games is back for 2005 with another awesome line-up, showcasing the best in Skate, BMX, FMX and B-Boy flavas! Taking place on Clapham Common, London from Friday 22nd to Sunday 24th July, this three day festival brings together the cream of UK and International talent in action sports, break-dancing and turntablism. Â£36,000!!! the largest ever UK prize purse is what competitors will be battling it out for!
Read more
News 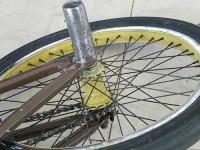 There are so many events going on this summer that at least one of them will be taking place close to where you live. After initial plans of having the Gravity Games in California didn't work out, the quickly shove the event in the booming summer schedule with Vert being held at Woodward and street/dirt in Philadelphia. Here is the official 411 from the Gravity crew: This year, the Games, presented by OLN, are going back to where it all began - the fertile action-sports breeding ground of Woodward, PA and the legendary streets of downtown Philadelphia.
Read more
News

Written by Bart de Jong
Read 2029 times
Thank you for your submission!!!

We will post the details of the winners here on FATBMX.com, so keep checking the site.