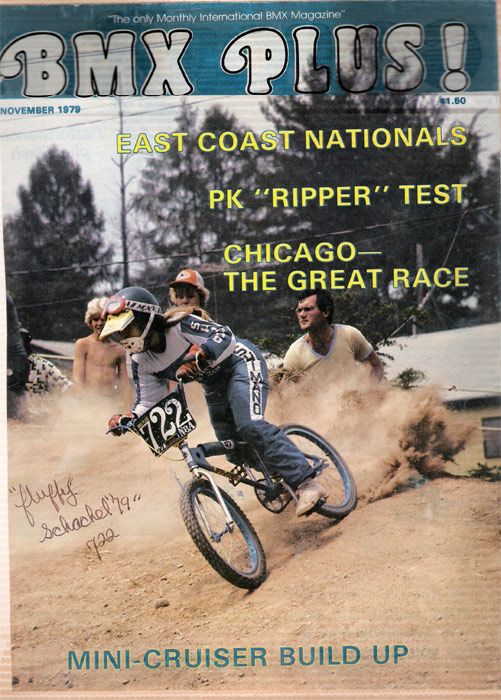 When was it that you first threw a leg over a BMX bike?
Kathy: I started racing BMX when I was 11 years old. My first race I came in third place against the boys.

Was it easy to get BMX bikes back then or did people have to start on regular bikes because it was difficult to get the original BMX bikes?
Kathy: I did have a real BMX bike... they were hard to find at the time and that was in 1977.

Did you have a local BMX club where you lived at the time?
Kathy: We had a local bike shop called "Cosmic Wheel" in 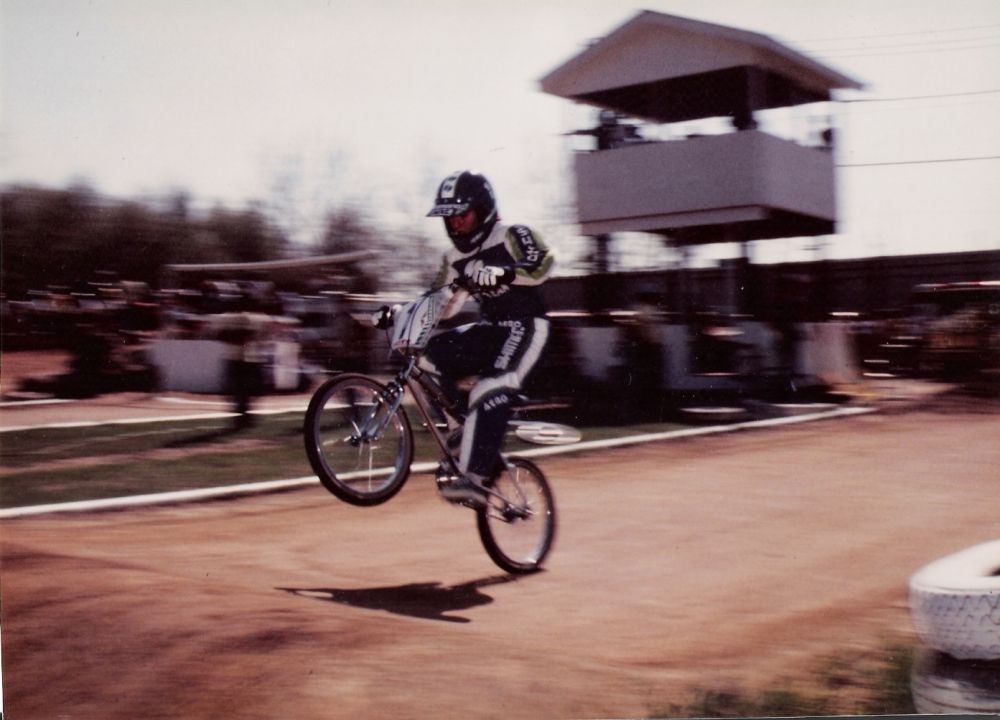 Bogota , NJ. We would meet up and ride together to local home made trails, we would bring a shovel and build jumps.

Who drove you to the races?
Kathy: My dad took me to the races, sometimes I would go with friends, then later on with the Shimano Pro team.

When was it that Shimano showed interest in sponsoring you?
Kathy: Shimano decided to sponsor me after I placed third in the Jag World Championships. I was 13 years old at the time.

You were on the same team with Bobby Encinas & David Clinton, did you travel as a team together or did you just meet at the most important races in the USA?
Kathy: Shimano had an East a 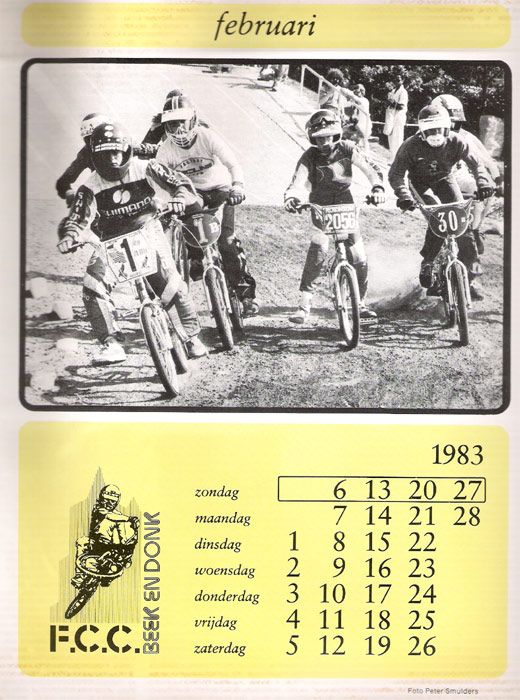 nd West coast team in the US at that time. We would meet up at the National Races. I was the only non professional racer on the team as well as the only girl.

Then in 1982 you made it over to The Netherlands for the Open European BMX Championships in Beek en Donk. What do you remember from that trip?
Kathy: That was such a great trip for me. It was a huge honor to represent the USA. I remember everyone was so nice and made us all feel like rock stars. I got interviewed by BBC ra 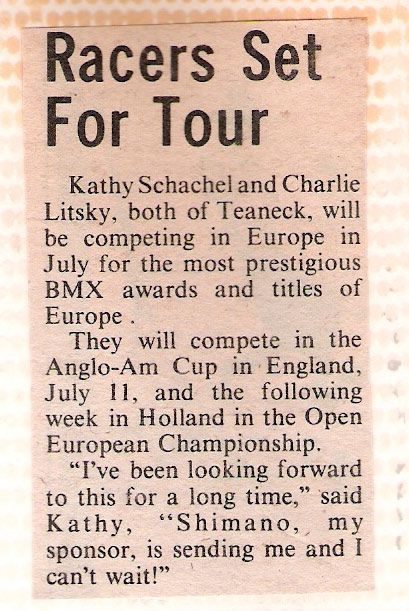 dio. I was 16 at the time. I was surprised how many girls were racing at the European Championships. I remember That Charlie Litsky promised my family he would take good care of me since my parents could not go. I was very proud to become the European Champion it is something I will never forget.

Did you realize back then that you were crossing the atlantic all because you were good at riding a BMX bike?
Kathy: Oh yes it was a huge honor all the racers that went had to get permission to compete overseas. George Esser, (Director of the NBL) sent Gerrit Does (International BMX Federation) a letter so we could race in England and Holland. 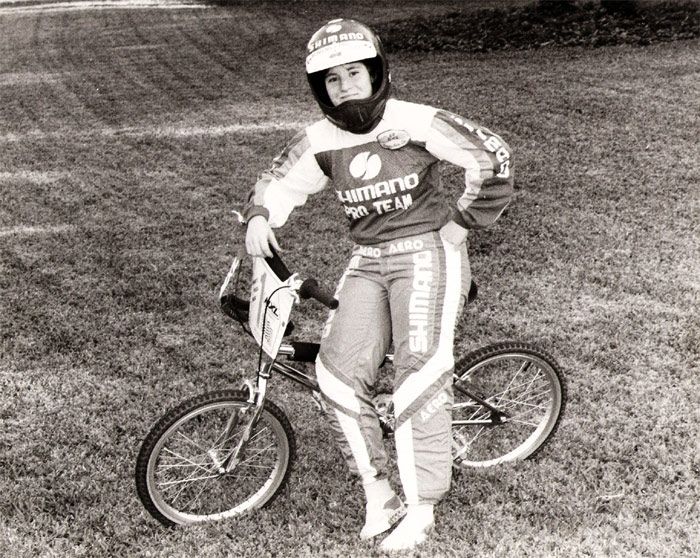 What were some of your favourite races that you ever raced?
Kathy: There were so many great racers at that time its hard just to name a few. Gaby Bayhi, Kim Johnson, Terri Fregoe, Jen Zuener, Heidi Mirasola, Margo Carroll, were all great competitors. 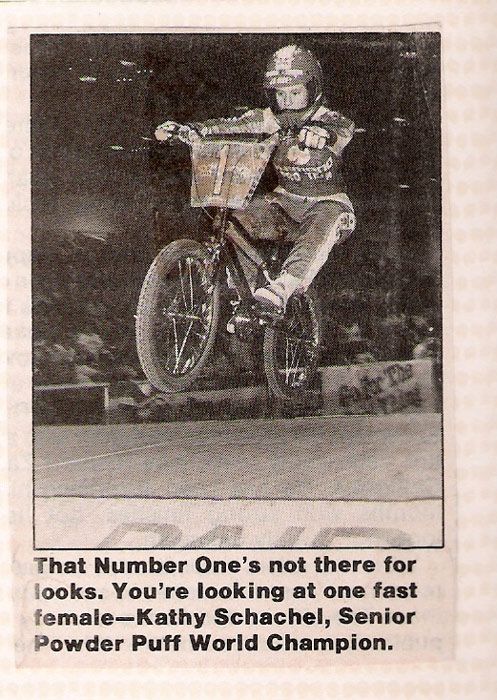 Did you try to stay involved in the BMX scene after you retired actively as a racer?
Kathy: I loved racing BMX and it was a tough decision to retire. I made a clean break from BMX and went to College.

Looking back, was BMX a cool way to grow up as a kid?
Kathy: Yes it was very cool to grow up racing BMX ! What I loved about BMX is that every one gets a chance to compete. BMX is a great sport. It helped mold me into the woman I am today. I hurt my knee racing and was so impressed by the Physical Therapy I received, I became a PTA.
Tweet

More in this category: « Oakley BMX Grips 1980 NBL "War of the Stars" Grand National in Evansville, IN »
back to top