JOEY BRADFORD OFF TO GREAT START 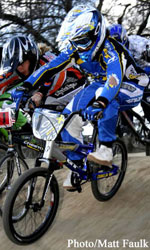 – Monterey, California – So far in 2006, GT Bicycles’ 16 Expert Joey Bradford has picked right back up where he left off in ’05 after winning his first ABA NAG#1 title last November at the ABA Grand Nationals in Tulsa, Oklahoma. After, the Grands, the head honchos at Pacific switched Joey from Mongoose to GT. Before his GT debut in Reno, Joey switched up tire size and changed crank length, which gave him some gearing problems. Reno was a start to the year that Bradford feels wasn’t quite up to snuff. Of course for Joey, with a second and third in 16 Expert, anything less than a win is sub-par. Joey made up for it with a 16 Expert double in Bakersfield including a great high low pass between Sowers and Woodmansee to take the lead in Saturday’s 16 Expert main. Check out the following [url=http://joeybradford.com/images/videos/C1assmain1.MOV]movie[/url] to see this main.

A couple years ago, to make things a little more challenging, Bradford started racing a Mountain Bike in cruiser. Bradford busted out his brand new GT MTB, powering it to a pair of thirds for the weekend. Not bad for a bike that’s at least 10 pounds heavier than the competition.
The next weekend was the NBL Boulder Dam National in Boulder City, Nevada. After battling all day with Warren McDow and Euro Martijn Scherpen in the UCI Junior Men’s class on Saturday, Bradford took the lead from start to finish in the main. Joey also added yet another win in 16 Expert on Saturday. In Sunday’s 16 Expert main, Bradford tangled with Joe Sowers in turn one, nearly going over the turn. Last weekend in Pasco, Washington, Bradford doubled on Saturday in 16 Expert and 15-16 Open. Bradford claimed victory in Open again on Sunday but unclipped down the first straight in his Expert main. He then tangled with Nic Long in turn one and nearly crashed and the race was out of reach by then. Here’s a [url=http://joeybradford.com/images/videos/PascoDayOne.MOV]movie[/url] to Joey’s Saturday class main in Pasco.

Up next for Bradford is NBL Nellis, ABA Phoenix and the Sea Otter Classic MTB race in his hometown of Monterey, California. Check out www.joeybradford.com for more info!