Written by  Bart de Jong
Read 7669 times
Round 5 of the 2006 ABA Pro Series was held this past weekend at the world famous Black Mountain track in Phoenix, Arizona. The Black Mountain track has to be the smoothest track on the ABA tour, and one of the fastest tracks as well. With a weekend of great weather, over 300 action packed moto's, and the worlds fastest Pro riders in attendance, it would make for an epic BMX race weekend. Here is how the Double A Marketing riders in attendance finished up for the weekend.

Randy Stumpfhauser had another great weekend of racing, with 2 podium finishes. On Saturday, Randy was looking super smooth and fast all day, and when it was time for the AA Pro main, he was one of the standout riders on the track. Randy finished up just out of the 1st place spot, with a 2nd overall . This was his 5th podium in AA Pro in as 5 races in the ABA. In Pro Cruiser, Randy finished up 5th. On Sunday, Randy looked to podium again in AA Pro, but a 8th place finish in the first main would not allow it and give him 5th for the day.

Dale Holmes made his fans happy as well in Phoenix, as the crafty veteran of AA pro was in both the AA and Pro Open mains on Saturday. Dale impressed a lot of the younger riders with his speed and skill on the super fast Black Mountain track. Dale's best main event finish was a 3rd in Pro Open, while he settled for 8th in AA pro. On Sunday, Dale was once again out front and looking to be in both main events, but a crash in the 3rd moto ended his day short. Dale will be heading over to Europe in a few weeks for the first few rounds of the European race series. Look for him and the Free Agent World team to be atop podiums world wide. Dale's sponsors include Free Agent, KHS, THE, Skin, Shimano, Troy Lee Designs, ODI, Sun Ringle, Power Bar, OGIO, Utopia, S & M Bars and Forks, Thomson, Kenda, Cyto Sport, DaleHolmes.com and BMXpros.com.

Kyle Bennett looked impressive as ever on the Phoenix track, with huge leads and easily making it to the AA Pro mains both days. On Saturday, Kyle looked to be one of the riders to beat as he holeshotted the 1st main event, but an aggressive move by another rider left him on the ground in turn one. Kyle would fight back for better results for the rest of the main event, but he would finish up 7th for the day. On Sunday, Kyle was back, looking ready to redeem himself with a better main event finish. Kyle did just that, with a 2nd overall and making his fans quite happy. Kyle's sponsors include Free Agent, KHS, Fly Racing, Bombshell F1 Fork, Sun Ringle, Shimano, UGP, Kenda, Thomson, Utopia Eyewear, THE Products, S & M bars, ODI, ORP, OGIO, Powerbar, Cyto Sport, and BMXpros.com. 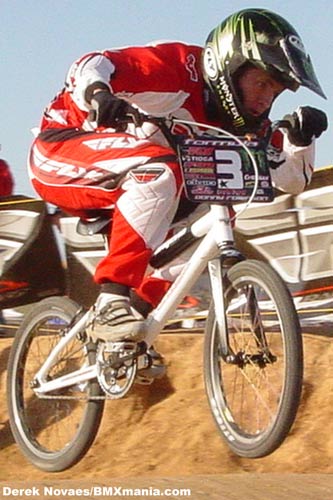 FORMULA FACTORY TEAM HEATS UP WINTERNATIONALS – Phoenix, Arizona – The Formula Bicycles factory team rolled into Black Mountain BMX last weekend to do some damage on the ABA side of the coin.  With Mike Lundy taking a break for the winter, Donny Robinson, Amanda Geving, Warren McDow, and Chad Kerley were all ready to flex some Formula muscle on the track where it counts.

Donny Robinson has been the hottest Pro on the planet lately and Phoenix was no exception.  Coming off his first ever Elite Men’s double the week prior at the NBL’s Nellis national, dR was amped to make his mark in the ABA.  “I feel like I’m on top of the world right now,” stated Robinson and with good reason.  Donny came into the Winters leading every Pro points category (20” and cruiser) in the ABA, NBL, and UCI.  Donny was feelin’ it on Saturday easily powering through motos.  In the main, dR proved once again that he’s the man to beat right now powering his Formula Solution Pro to a  decisive win.  dR backed it up in Pro Cruiser with another start-to-finish victory for his first-ever same-day Pro double.  On Sunday, Robinson once again rocked AA Pro winning all three mains, another first for him.  dR couldn’t make it a clean sweep with a double double, getting barely beat out in Pro Cruiser and settled for second place.  Any way you slice it, three wins and a second is great in BMX and unheard of in the Pro ranks.

Amanda Geving made the trip from Florida to do battle in the ultra-competitive Women’s Pro class.  Geving nabbed herself a fifth on Saturday and powered her Formula Hybrid Pro Minus to a second place on Sunday.

Warren McDow had trouble just getting to Phoenix and the trip was one worth forgetting.  After his flight was canceled last minute on Friday morning, Warren made it to Phoenix early Saturday morning and practiced with barely any sleep.  It showed as Warren didn’t make class or open main on Saturday.  On Sunday, McDow crashed hard in his 17-24 Open main, severely bruising his shoulder.  With the injury, he barely could make it out of the gate come his class main and had to settle for fifth.  Warren promises to be ready for Roseville.

Chad Kerley always delivers a show for the fans.  With his combination of skill and smooth riding, Kerley is the mini-pro that everyone knows to watch.  On Saturday, Kerley battled with Jordan Miranda in 11-12 Open but settled for second.  In 12 Expert, Kerley had Wesley Gunn in sights.  Black Mountain is Gunn’s home track and between the announcing and the fans screams, you would think Gunn has it in the bag.  Not so.  Kerley dropped into the second spot behind Gunn for most of the race.  But anyone who knows Kerley knows that the last place you want him is in second right behind you.  Chad set up Gunn in the last turn and used his patented swoop to take the lead and the win on his Formula Solution Expert Plus.  In Sunday’s 12 Expert main, Chad got a good pop and lead it start to finish for his first double of the year.

Look for the Formula Factory team at the NBL’s Florida national this weekend and at the ABA’s Roseville national later this month.

More in this category: « Motocross Grand Prix 1, Zolder, Belgium Crupi’s Mike Moeller out with injury »
back to top