Written by  Bart de Jong
Read 9527 times
The second annual DC Sprint trails race took place over the weekend at Randy Stumpfhauser's backyard in California. A bunch of pros showed up to race one-on-one in sunny conditions. The 10 second girl was a nice addition to the race that was held on a well groomed trail track. Last year's winner Randy Stumpfhauser was once again the man to beat and everyone, including Robert de Wilde, failed to eliminate the new daddy.  Robert ended up racing for 3rd against Aaron Johnson. Aaron beat Robert once and Robert beat Aaron once. The time difference was in Aaron's advantage so he grabbed third place. Mike Day had transfered to the final by beating Johnson and had to take on the GT rider. In heat one, Mikey Day crashed which gave Randy a 1.5 second advantage going in the final race. Staying on the bike and close to Mike in the second heat was all Stumpy had to do to win but instead he grabbed the second heat as well. True champ. 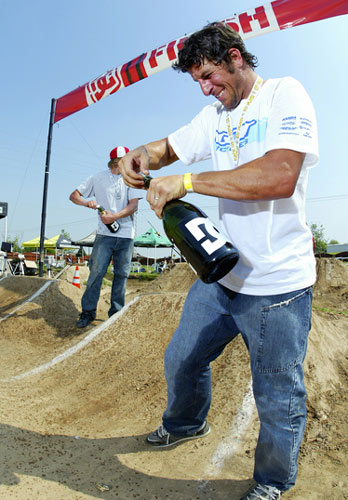 More in this category: « ABA Points standings as of after the Phoenix Winternationals Team USA announces BMX UCI World Championship Teams »
back to top