Racing updates from Formula, Double A Marketing and Redline

Written by  Bart de Jong
Read 6863 times
- El Cajon, California – The Formula Factory team was all over the map this past weekend with riders in Texas and in Florida representing. Donny Robinson was trying to continue his winning ways at the ABA’s Super Nationals in Desoto, Texas while Amanda Geving kept it close to home racing the last NBL Florida State qualifier at Charlotte BMX in Punta Gorda. Donny rolled into Metroplex BMX in Desoto as the hottest Pro on the tour. Could dR keep the win streak alive? Here’s Donny himself on how the weekend went:

“Pretty simple really. I wasn’t the overall fastest rider this weekend. Kyle Bennett was riding really well. I had trouble with the first jump all weekend and little mistakes cost me.”
“First main Saturday, got second behind Kyle. Second main blew the first jump and was in last but got past a wreck in the first turn and got second again. Third main all I had to do was beat Mike Day and be right behind Kyle. I was in second behind Kyle until over the last jump. I bonked it and Mike Day passed me. So, if I would have stayed there, I would have won again, but since I bobbled and got third in the last main Mike won, Kyle second and I got third. In cruiser Randy Stumpfhauser just plain beat me so I settled for second.”

“On Sunday it was the same thing. First main I got second behind Kyle. Second main got a late gate, got squeezed in the first turn, fell, and got last. Third main, I hit the gate bad, came out dead last, made some dumb moves, and still got third. Overall, I think I got 5th - that’s what the check said. I felt good this weekend but just couldn’t put it all together and Kyle and Mikey were riding too well all around. Oh yeah, I won cruiser, so that’s a plus.”

Amanda Geving once again proved she’s the girl to beat in Florida. Amanda’s always been on top of the Florida BMX scene and this year’s no different, grabbing yet another double in Elite Women’s. Amanda is also still in the lead for the NBL Elite Women’s title and sits in the number 5 spot in the ABA. Amanda Geving gets it done on her Formula Solution Hybrid Pro Minus.

Also of interest was Formula co-Factory rider Tommy Board rockin’ out at the NBL Dixieland National in Nashville with a win aboard his Chrome-Moly Formula Solution Pro Plus. Make sure to check out the ALL NEW formulabicycles.com for further info. 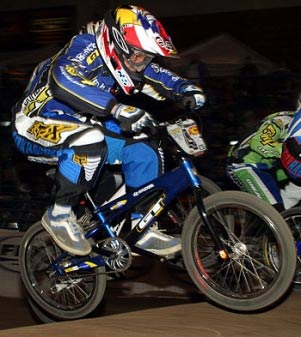 The ABA held round #6 of the 2006 Pro Series this past weekend in Desoto, Texas. Desoto is one of the premier ABA tracks in the USA, built just like most other things in Texas, Big. The Desoto track is a cover arena with full grand stands and one of the best tracks in BMX today.

Randy Stumpfhauser was ready for Desoto, as he felt great after his win at the DC Shoes Sprint trails race, just last weekend. Randy was in both the AA Pro main, where he placed 6th, and Pro Cruiser, which he won on Saturday. On Sunday, Randy was back in the main events, with 4th place finished in both classes. We would like to congratulate Rand and his wife Carrie as the brought home their first child last week. Randy's sponsors include GT Bicycles, Kenda, ODI, Tangent, Sun Rims, Bombshell, Fly Racing, Powerbar, CTI Knee Braces, OGIO, X Balm, AC, Tool Shed, SDG, SRAM, Easton, S & M Bars, Cyto Max, and BMXpros.com.

Kyle Bennett has had another great season going so far, and Desoto capped off another 2 huge wins for him. Kyle kicked things off on Thursday night, with help from Jason Rogers, doing a Free Agent clinic at the track. After giving the riders some tips, Kyle got the track wired and is sure helped for the weekend of racing. On Saturday, Kyle just missed out on the win in AA pro, by finishing 2nd overall after the 3 main events. Kyle came back strong for the Pro Open main event, wining it with an impressive lap. On Sunday, Kyle was flawless in the AA mains, wining it overall, adding another win to his list in the ABA title chase for 2006. Looks like things are heating up for Kyle as he sits near the top of both the ABA and NBL Pro points. Kyle's sponsors include Free Agent, KHS, Fly Racing, Bombshell F1 Fork, Sun Ringle, Shimano, UGP, Kenda, Thomson, Utopia Eyewear, THE Products, S & M bars, ODI, ORP, OGIO, Powerbar, Cyto Sport, and BMXpros.com.

CARNE$ IS BACK! WINS DeSOTO BOTH DAYS;

Redline pros had something to prove in front of their home-state crowd. Under the incredible, jump-infested million-dollar indoor built by the City of DeSoto, JASON CARNE$ was out to prove that his December knee surgery is behind him, KIM HAYASHI is out to prove she’s still the most talented and skillful Girl Pros, and 2-month Temp Pro JOHN “The Jackal” PURSE has returned to prove to all that he’s still a contender to be reckoned with at 34 years of age. …

At Phoenix in April, Carne$ looked in to his crystal ball and gave us his prediction – "My knee’s are going to be 100% by DeSoto. That’s going to be my coming out party,” thinking twice about what he just said. “You know what I mean -- those guys better watch out.” Sure enough, Vanilla Thunder showed the Vet Pro class that he’s still got what it takes to win a remarkable FIFTH consecutive No.1 ABA title in November, by winning BOTH days. In fact, he even went 1-1-1 in the mains on Sunday, with outside gates. He proved that you’d better not count out the 4-time (2002 – 2005) Vet Pro Champ in this years’ highly contested battle for the ‘Cup. “It feels great to be back on top of the podium,” commented the Horny Toad. “But I’ve still got some catchin’ up to do,” referring to his No.5 points position; as compared to the past three years where he’s lead points all season long. …

With last years’ DeSoto AA-winner Bubba Harris still on the shoulder-mend (at home doing sprints to prepare for his Georgia return), REDLINE temporarily filled his AA-position with a face who is no stranger to the red, white and black. And no stranger to DeSoto. In his second race back with Redline, “The Jackal” was showing flashes of his old self in the motos and lined up with the who’s-who of AA Pro in Saturday’s most stacked semi. Unfortunately, a 5th there wouldn’t get him in the big show. But on Sunday, it was a completely different story as Purse got out of the semi’s and on in to the Big Show.

For those keeping track, this was Main #310 for the 17 year veteran of AA-dom. Not only will it be some time before we see another rider match Purse’s longevity, but his 310 and counting Main Events will likely become the BMX equivalent of Babe Ruth’s legendary homerun record. In Sunday’s three rounds for the money, Purse and his Flight Pro XL were hangin’ in there with the young guns. A crash or two in front of him kept Purse off the podium.

KIM HAYASHI; the current points leader in the ABA, was out to maintain her position. In practice she felt strong, but when it came time for racing, the track was her toughest competition. Lil’ Kim struggled with the jump infestation that DeSoto is becoming known for, and in the end two 3rd place scores was the best she could muster. Overall, you just can’t beat DeSoto. It’s one of those National locations that you must hit up at least once in your lifetime. The jumps and Texas crowds, like all things Texan, are big. And Redline would like to thank all of those who cheered big for Texan favorites Carne$ and Purse.

More in this category: « REDDITCH PREMIERS BMX CLUB REFORMS News from the ABA. By Shannon Gillette »
back to top