Written by  Bart de Jong
Read 3400 times
Round #6 of the 2006 NBL Pro Series was held this past weekend in Prunedale, CA and with just 2 more NBL Pro Series event left, the title chase is getting hot. Donny Robinson had a nice lead in the Elite men's point for most of the season, but after a great weekend of results for both Double A Marketing riders in attendance, Randy Stumpfhauser and Kyle Bennett have both chipped away at the points lead and put themselves in great positions to take home another NBL #1 Pro title. Here is how the weekend went for both riders:

Randy Stumpfhauser had a weekend to remember in Prunedale.
On Saturday, Randy won every lap in competition on the track all the way up to both the NBL Elite main event and the UCI Elite Men's main event. When the gate fell for the NBL Elite main, Randy continued his streak of wins, as he took the race from start to finish. Randy just missed out with a completely perfect day when it came to the UCI main event, as he was just off the front spot and finished up 3rd. On Sunday, it looked as if Randy was going to keep his winning streak going, as he once again was out front all day. As the NBL Elite main rolled off, he was out front, winning the Sun Ringle Hole Shot award in the process, but he couldn't hold off the huge charge by Kyle Bennett down the last strait, and finished up 2nd.
Randy's sponsors include GT Bicycles, Kenda, ODI, Tangent, Sun Rims, Bombshell, Fly Racing, Powerbar, CTI Knee Braces, OGIO, X Balm, AC, Tool Shed, SDG, SRAM, Easton, S & M Bars, Cyto Max, and BMXpros.com.

Kyle Bennett went 4 for 4 this weekend, by making all the Elite main events. On Saturday, Kyle looked to be the only rider who was going to give Randy a run for his money in the main events, but in both the NBL Elite and the UCI Elite races, he had a bit of bad luck and would finish in the back of the pack placing 8th in both. On Sunday, Kyle was ready to make up for his small mistakes and in the NBL Elite Men's Main event, he did just that. Kyle was in 2nd behind Randy for most of the lap, stalking him and waiting for his chance to pass and he did just that out of the last turn and taking home the win. Kyle also placed 7th in the UCI Elite main on Sunday.
Kyle's sponsors include Free Agent, KHS, Fly Racing, Bombshell F1 Fork, Sun Ringle, Shimano, UGP, Kenda, Thomson, Utopia Eyewear, THE Products, S & M bars, ODI, ORP, OGIO, Powerbar, Cyto Sport, and BMXpros.com. 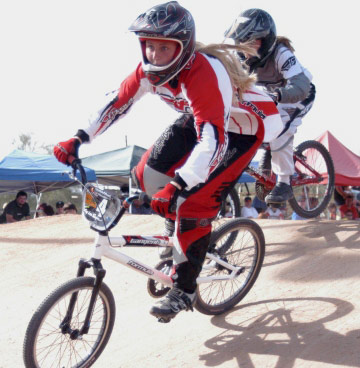 – El Cajon, California – Formula riders were once again all over the NBL map this past weekend with Elite Men’s leader dR Donny Robinson at the Golden State National in Prunedale, California and Elite Women’s leader Amanda Geving at the Florida State Championship in Tampa, Florida.  Both riders had something to prove this weekend with Donny being the most dominant Elite rider on the planet so far in 2006 and Geving dominating the Florida State series for the past seven years. 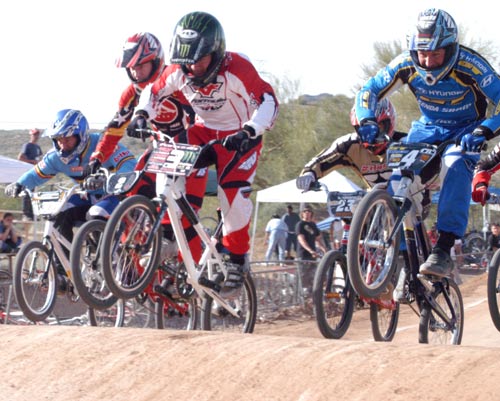 Rain threatened Manzanita BMX in Prunedale, holding off on Saturday but Sunday was a different story.  dR came into this race still leading all sanctions pro points and sitting in the two spot in UCI Elite men’s points.  This race was all important because this time around, both days held UCI points races.  Here’s Donny in hos own words on how the weekend went:

“Friday I practiced in the rain at like 6pm when all the other pros were already back at the hotel.  Saturday didn't start off too well as I crashed once, but it turned out OK as I made both NBL and UCI Elite mains.   The NBL main had some squeeze down the first straight.  I was in third, passed Javier Colombo down the second straight and tried to catch Stumpy but was a few feet shy at the line so I got second.  In the UCI main,  I battled with DeWilde down the first straight, we bumped a bit in the first turn and I was able to come out of that the better and went on to win that race, so I was happy with Saturday.”

“Sunday had the threat of rain and I really wished it would have either rained hard all day or not at all.  It just sprinkled on and off enough to make the turns and gate slick which gave me a bunch of problems. I rode cautious in all my motos and barely was able to make the Elite semi Sunday.  But I had some decent laps to make the mains again in both.  I went half-power out of the gate in both mains because I didn't want to slip and start out in last.  I wasn't able to let loose as much as Saturday and I ended up fourth in both mains.  I certainly wasn't pleased with Sunday’s outcome but that's the way it went with the rain for me. A bunch of guys were going fast this weekend and it’ll be good in Perris next weekend for sure.”

Donny, after reading some press release poetry about Bubba’s return to racing, felt the urge to do some rhyming of his own:  "Hey, Bubba is back in May and Donny knows it will be a lot of fun on race day, that's all he's got to say."  dR rocks the Formula Solution Pro while killing the Pro ranks.

On the other side of the country, Formula’s sole female factory team member Amanda Geving stayed home to once again prove she’s the most dominant girl in Florida BMX history.  Amanda had won the Florida state championship four years straight on her 20-incher and has never lost a state cruiser title in 6 straight years.  Amanda never lost a lap all weekend and continued her dominance in the Sunshine State, winning her fifth title on her 20 inch (second as a Pro) and her seventh on her cruiser.  “I felt good all weekend,” stated Geving.  “I’ve worked hard to get where I am and it feels good to be on top in Florida once again.”   Amanda Geving runs the Formula Solution Pro Minus Hybrid.

Look for the Formula Factory team at the ABA Spring Nationals in Lake Perris, California next weekend.

More in this category: « BUBBA HARRIS GETS DOC’S â€œOKâ€? TO RETURN TO THE CHASE ABA PRO SERIES POINTS AS OF ATLANTA, GA. - Dixieland Nationals »
back to top