Written by  Bart de Jong
Read 12169 times
UCI INTRODUCING PERMANENT CAREER NUMBERS Starting with the season 2006-2007 (from 1 August 2006), the UCI is introducing a permanent number system for Elite Men & Elite Women. With this system, riders can choose a “career number”, which they have the exclusive right to use for their entire Elite class career. This will give riders a possibility to market themselves and to give media and spectators an easy way to identify riders. The UCI permanent number system is solely for the Elite Men & Elite Women class, where any rider with an international license rider can choose a permanent career number from 10 to 999.
Number 1 – 8 will be reserved and will be assigned to the top 8 finishers in the previous years BMX World Championship, and can be used for the upcoming season. A chosen number will be exclusive for the rider, and cannot be used by any other elite class (including Junior and Cruiser classes). A chosen number will remain as long as the rider receives UCI points during the season, although the number will be assigned to the rider for 2 additional years (without points) before becoming available again. The National Federations will receive an application form shortly, and shall submit a list of all their (Elite Men & Elite Women and Juniors moving up) riders, wishing to receive a permanent number before July 30, 2006. Individual riders shall contact their National Federation in order to apply for a permanent number. 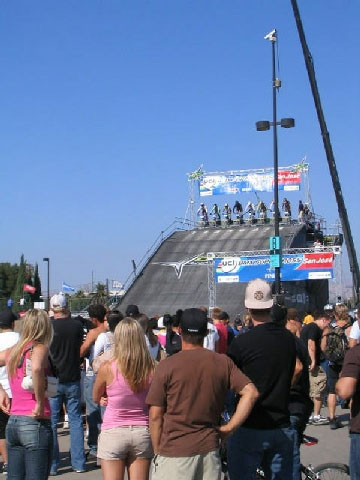 2006 UCI BMX SUPERCROSS WORLD CUP As previously announced, the 2006 UCI BMX Supercross World Cup will be held over 2 rounds. The first round of the UCI BMX Supercross will be held 6-7 September 2006 in San Jose, CA (USA) at the “Toyota Challenge” stop of Dew Action Sport Tour. A new feature for 2006 is that the BMX Supercross finals will be held on Thursday night under lights, assuring a spectacular show for TV and spectators. The second and final round of the UCI BMX Supercross World Cup will be held 6-7 October 2006 in conjunction with the Roc d’Azur event in Fréjus, France. Roc d’Azur is one of the largest cycling festivals in the world, 2005, Roc d’Azur attracted more than 120’000 spectators with its shows and exhibitions which also featured a mountain bike marathon event with over 10’000 participants. With the event being located 5 minutes from the Mediterranean Sea has more likely played an important role to its success. Please visit [url=http://www.rocazur.com]SX  Roc d'Azur[/url]

2006 UCI BMX WORLD CHAMPIONSHIPS, SAO PAOLO BRAZIL The UCI track builder Tom Ritzenthaler (USA) has recently returned from Brazil where a world class permanent BMX track has been constructed for the upcoming UCI BMX World Championships in Sao Paolo. The 2006 UCI BMX World Championships will be held 28-30 July 2006 at the Mario Covas Olympic Park. For general information regarding the event, lodging and travel, please visit the UCI website. The online registration system has been activated for all National Federations on the UCI website, where they are requested to enter all participants in Challenge classes before the deadline of June 15th 2006, and July 14 for the elite classes. All riders must enter through their National Federation, and no individual entries are accepted.

2006 UCI BMX RANKING The UCI is pleased to introduce the UCI BMX ranking and results in a new format directly linked to the UCI website calendar. The Continental ranking is in full mode on all continents, with the South American and Asian/Oceanic ranking coming to an end, while the North American and European ranking series is getting busy with races all the way up to the World Championships in Brazil.
Elite Men Overall ranking
With the latest ranking published (21/06/2006) Robert de Wilde (NED) has once again proved his worthy of his new nickname “UCI-Bob” and moved into the top spot. Oceanic standouts Kamikaze (AUS), Wade Bootes (AUS) and Mark Willers (NZL) have been scoring good points and are way up there in the Overall standing as well. Look for other North American riders to move up through the rank when the North American races are kicking in full gear. Don’t count out the Euro’s where the super strong Latvian riders and the French squad has been scoring good points in the beginning of the series.
Elite Women Overall ranking
Gabriella Diaz (ARG) has made a move towards the top scoring valuable points in the last rounds of the Latin American rounds. Tanya Bailey (AUS) and Renee Junga (AUS) follow closely in the points chase. The fastest women on the European and North American ranking is catching up fast, so expect changes in the top of ranking in the near future.
Junior Men Overall ranking
In the Junior category, the top riders from all continents are only separated by a few points, whith Todd Pascoe (AUS) in the lead, followed by riders such as Martijn Sherpen (NED) and Joey Bradford (USA).
Junior Women Overall ranking
The Junior Women category is getting more intense by each week, make sure to check it out. To view the complete UCI ranking, please view; [url=http://www.uci.ch/ucinet/uci.asp?page=rankings&discipline=bmx&ryear=2006&ridercategory=me&l=eng]UCI ranking[/url]

More in this category: « SE BMX team in the UK NBL STARS N’ STRIPES NATIONAL NBL/UCI Series comes to a close this weekend »
back to top