Written by  Bart de Jong
Read 15325 times
RL-FRANCE: The French legion of REDLINE has been rackin’ up some impressive results – starting off with the recent National Championships. ENZO SCHILLING was the first to take the N°1 FRENCH TITLE in his age/class. Enzo’s Championship start wasn’t the greatest, but he pulled off a tremendous move in the first turn to take over the lead and went on to stretch his led by skyin’ the triple jump – the only one in his class to do so. We reckon that when you’ve had a Ferrari named after you, there’s a lot of pressure to go FAST. Then there was more good news for France and Redline from the biggest race in Europe – the Euro Championships. When all was said and done, French REDLINE Elite rider DAMIEN GODET became VICE CHAMPION 2006 In Elite Men Cruiser (2nd in Elite Cruiser).
The Euro Championships were held this year in Cheddar, England: and Damien was extremely fast down the third straight and was incredible in every turn. The crowd definitely noticed Godet’s speed and carving talents in the corners. And it was in these turns--especially into the last one, where he brought us a wonderful 2nd place finish aboard his Redline Flight 24”er. Together – Enzo and Damien have inspired the national French team to do the same or better at the upcoming UCi World championship in Brazil. REDLINE Bicycles are distributed in FRANCE by SUNEX. 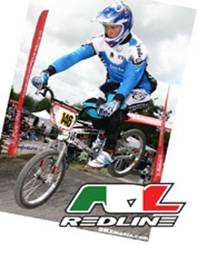 RL-ITALY: With the Olympics less than 2 years away and European Pro action heating up like boiling pasta, doing well at the European Championships can make a huge difference in a riders’ career. Solid proof of that is Redline~Italy’s No.1 Champ MANUEL DeVICCHI, who performed well enough throughout the season and at the Euro Champs that he moved up in the UCi European rankings to the final No.10 position. If Manual keeps it up at this rate, there is a likely possibility that Italy will be given one spot in the Olympic invitations. And best of all, the Redline FLIGHT Pro Xl racer will be Italy’s great hope for Olympic glory in Beijing. REDLINE Bicycles are distributed in ITALY by CICLOMANIA 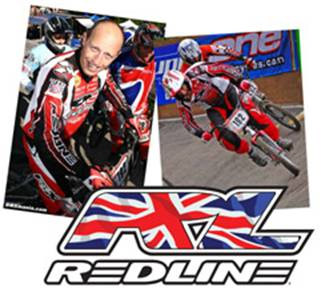 RL-ENGLAND: If BMX Racing in the UK was HOT in the 80’s, then it’s safe to say that it’s getting even HOTTER in the new millennium. As this years host to the European Championship (a HUGE honor), UK BMX Racing is growing in popularity and again breeding some of Europe’s finest athletes. The Euro Champs were brilliant and the UK-chapter of Team Redline got some great coverage throughout the weekend. And the highlight for REDLINE as well as all of Great Britain would be “Hilly”, ALAN HILL, doubling in front of his home country crowd. Hill was on fire, and won both 30-39 cruiser AND 30+ mens. So, Redline-UK now has a double EUROPEAN CHAMPION! WELL DONE Alan Hill Redline UK! Two-time No.1 Euro. Unfortunately, other members of the Redline UK brigade went out a little earlier in qualifying: Abi Hill was unfortunate to miss out in the final with a fifth in her semi. Greg went out in the motos, as the competition was immense in his class—getting cut with 12 points. And RL team manager Shaun Calvert got taken down by a Belgian dude in the 3rd moto and limped in to the semis where his day ended with swollen ankles. REDLINE Bicycles are distributed in ENGLAND by PADDED CELL

RL-GERMANY: Redline Germany has been very busy as of late. Rounds 7 & 8 of the European Championship series took them all the way to Sopron, Hungary. Beside the unbelievable high temperatures, we saw some great and even hotter races. Redline~Germany took 3 final places. Our young gal Regula went out of the motos directly into the main both days, where she placed 5th after a close battle with a fellow German competitor. On Sunday, she was on the outside of the gate and not fast enough to get to the inside line. Markus was in good positions on Day One in his motos, but little mistakes kept him from qualifying in to the next round. On Sunday he went into the 8th final of Elite Men, where he took a very close 5th. Team leader Kerstin, who still amazes all with her amazing speed-for-age ratio, was unable to close the door quick enough in the semi and ended her main-quest with a 5th in the semi. But she came back with a vengeance on Sunday – not only making the Final but taking 5th in Elite Women in a very close, bar-to-bar battle. The Hungary track was a little different, with the first 2 turns (and also last 2) making together 180 degrees. They were very flat with not much banking at all. A very strange, difficult to ride yet challenging course. In all – Germany was primed and ready for the Euro Champ Finals in Great Britain. Cheddar is a nice track, a bit downhill. I like it, as well as England - nice place to stay. But what Kerstin wasn’t prepared for was being used as a berm and whoopty-doo in the hard asphault turns. After some elbow-action, she and her Redline cruiser took a big digger in the turn, which she doesn’t remember much about. The photo sequence above and the scratches on her Pryme Pro Evil helmet are all she has to refresh her memory of it. REDLINE Bicycles are distributed in GERMANY by RABBIT BMX. 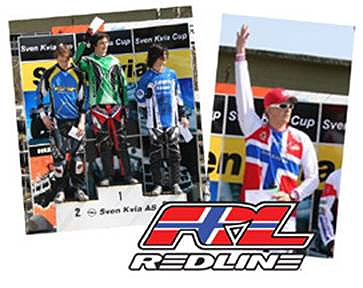 RL-NORWAY: First up came the the National Championships in Norway. As we all expected, the Redline colors were dominating all day. Frode Hess was out to defend his No.1 title on his Flight Pro-XL and he started off right where he left of, winning every moto coming in to the final. In the Main, Hess got the holeshot and began pulling away. He was followed by his fellow REDLINE team mate, Kim Erik Larsen. Coming out of the last turn, they were faced with strong head winds and suddenly Frode messed up coming over the final batch of jumps. This opened up the opportunity for Kim Erik to make a move and so he did. He mustered all the remaining power he had and passed Frode on the finish line, snagging the National No.1 title for 2006. Overall we had a great day of Racing at Aremark, With Kim Erik taking his first Elite men`s title, and Frode Hess backingup his No.1 plate with a No.2. The Redline Riders were also showing the colors in the other classes. In Junior Men, Simon Eia on his Proline Pro came in for second, while 14 year old Am Aleksander Birkeland once again brought home the win on his Flight Expert XL. Next came the Norwegian migration to the Euro Championship in England. The entire Redline~Norway squad went in to this event with total confidence. Frode Hess, Kim Erik Larsen and Anders Grønsund made it out of the motos but ended up watching from the grand stands when the racing was heating up in the 1/8 and ¼ semis. This time, the Norwegian hero was Andre Fosaa Aqilies who made the final in 15-Boys. He had been riding strong all day and was looking good coming in to the final. There was a crash in the first turn and a rider went down and as bad luck had it, took Andre down with him. Bad luck. Yet a 7th place in the Euros is still a great finish. All eyes on Andre in the future. The next big race for Redline Norway is the Scandinavian Championships where they will be battling it out with the Swedish and the Danish riders. Congratulation to all the Redline riders with your national titles for 2006. REDLINE Bicycles are distributed in NORWAY by RACING DEPOT www.racingdepot.no 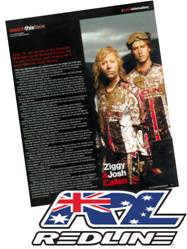 RL-AUSTRALIA: Junior Men Overall ranking: In UCI’s Junior Elite category, the top riders from all continents are only separated by a few points, with REDLINE~Australia global team member TODD PASCOE (AUS) holding the lead, followed by riders such as Martijn Scherpen (NED) and Joey Bradford (USA). For some time now, Pascoe has been predicted to follow the footsteps of such Aussie greats as Wade Bootes, Warwick Stevenson and Kamakazi. He IS a name to remember. Other great news from down unda’ for Redline~Australia was a recent article in Melbourne’s much-read TheAGE magazine featuring the dynamic brother-sister duo of Josh & Ziggy Callan. These two are also some mighty fast Aussie’s who are all set for BMX fame and fortune in the very near future. REDLINE Bicycles are distributed in AUSTRALIA by BMX INTERNATIONAL

RL-CANADA: UCI point races next year will be the most crucial for all countries – as that “Country Points” will determine who gets to bring how-many riders to the Olympics games in ’08. The more points a country has, the better their chances of bring a 3-Man or 2-Woman team. The BMX World is already preparing for this – as recently proven by the turnout at Alberta, Canada’s UCi International extravaganza. The Airdrie track; which is home to Redline Pro KEN COOLS (as well as one of the coolest looking announcing towers in al of BMX), hosted Canada’s best with a select few American Pros in the mix. Among those Elite Men representing the USA were John Purse; who is still sporting the REDLINE colors and receiving RL support after filling in for Bubba earlier this year. In Airdrie, The Jackal and “Big Rig” Cools were representing the red, white in black in true RL tradition – out front. In the main, Purse snagged a hard-earned 3rd place finish which moved him up a few notches in North American UCi points. [Photo courtesy of Barney Brown] REDLINE Bicycles will be distributed in CANADA soon by 10-PACK DISTRIBUTION 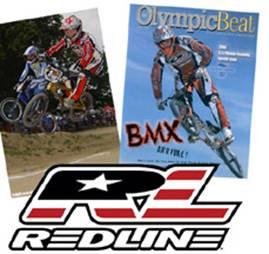 RL-USA: Certainly not least and never last (except for in this press release), we have the USA chapter of Factory Redline. Media-wise, the newest issue of OLYMPIC BEAT magazine has just hit the stands and subscriber. This is the official publication for the U.S. Olympic Committee – and for the first time ever, they introduced Olympic fans to what they can look forward to in ’08. And who is on the cover?! Could that be Gold Medal hopeful BUBBA HARRIS?! Following the Utah ABA national, Bubba and 4 other American Pros will be heading to Colorado Springs for the first time, to stay at the Olympic Training Center for a week. While there, they’ll do some strength test and training, and make familiarize themselves with the facility and all it has to offer. Other big news for Bubba is the 20 year old is now a homeowner, and will now call Goodyear, AZ as his hometurf. Racing-wise, Team REDLINE just attended SouthPark NBL, an dboth Bubba and KIM HAYASHI how hard the SouthPark surface is, while JASON CARNE$ found himself standing atop the podium on Saturday. Adding one more win to his NBL belt, Carne$ moves a tad closer to leader Kyomi Waller in Masters points. With only the NBL Grands left, the chase for their No.1 title is going to be ultra tight and exciting down to the final straightaway. Bubba, Kim and Jason – along with 11x ripper ANTHONY DeROSA are all packed, pumped up and ready for the UCi Worlds in Brazil – where they will be joined by fellow Redline riders from around the Globe. Bubba plan on defending his World No.1 plate and Kim is shooting for regaining her lost title from 2004. Stay tuned on how the Redline Global Forces finish.