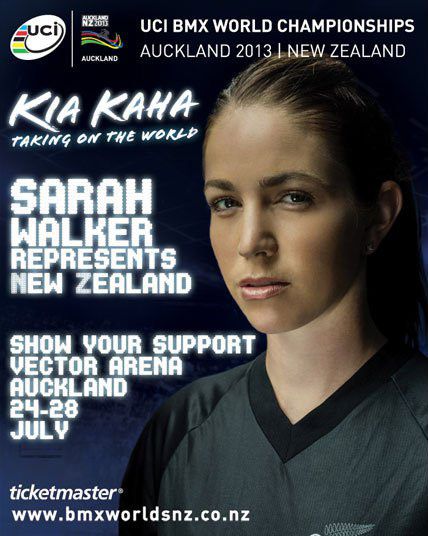 Olympic silver medallist Sarah Walker is confident she will be on the start ramp for next week’s UCI BMX World Championships in Auckland. Walker still has her arm in a brace after suffering a hairline fracture of her radius after a crash racing in the United States recently. The 25 year old plans to be back on her bike this week and is determined to compete in the world championships in her home country from 24-28 July. “If it was not in New Zealand then I would probably consider skipping it because of the injury,” Walker said at a World Championship promotion at Sylvia Park at the weekend. “This is the first time the worlds have been in New Zealand and most likely it won’t be back here while I am still competing. I’ve raced 10 straight years at the world championships and it would suck to miss the 11th one when it is here in New Zealand.”


faster than expected and medical advice confirmed that Walker should be able to compete. “She won’t be 100 per cent but we are confident she will make it. The facture is healing quickly and Sarah is doing everything she can, with twice daily ultra-sound treatments. “She is a very tough person. Sarah battled with a broken shoulder with little racing behind her and yet won a silver medal at London.”

Hollows is pleased with the development of the high performance squad after returning from training and racing in the USA. “Sarah was finding some really good form so the crash was a pity. She will come in to the championships with no expectations and you just never know because she is such a talented rider. “Kurt Pickard is starting find some outstanding form and the other guys are really developing well.”

The team leave for Queensland tomorrow where they will complete their final preparations on the Supercross track near Brisbane. “The racing and training in the US was just what we needed. Of course there were no high ramps there, so the eight days in Brisbane will be plenty of time for the riders to dial in to the 8m ramp and big jumps ready for the championships.” The team returns to Auckland on 25 July with their first official training session on the track at Vector Arena on Friday 27 July with elite racing starting the following day.

Work began today on building the ramp and track in Vector Arena and will be completed this weekend. The Championships begin with the Challenge class (age group) on Wednesday 24 July and Thursday 25 July, with elite practice on Friday ahead of the time trial world title decided on Saturday 27 July and finals on Sunday 28 July.