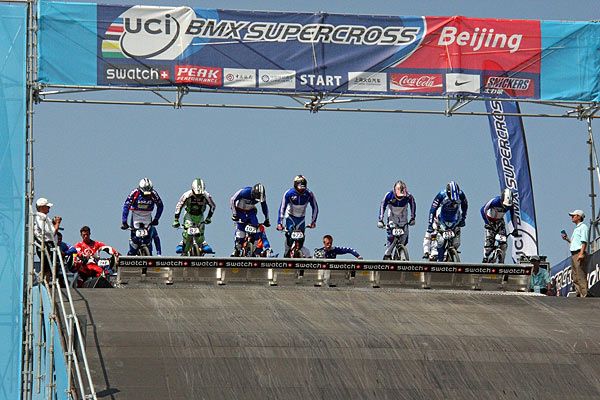 Union Cycliste International is pleased to announce that for the season 2007/2008, the UCI will introduce and adopt the UCI random start gate for all UCI events including the UCI BMX Supercross World Cup, the 2008 UCI BMX World Championships and the 2008 Olympic Games. After years of development, and a very successful test event held on the Olympic BMX track in Beijing China in early August 2007, the UCI has taken the decision to introduce the random gate system without further delays.
The UCI random start gate adds another dimension to the traditional BMX start gate, where patience and fast reaction will become important factors for an efficient start. The UCI random gate has also proven to more equal for the competitors, where premature movement on the gate is being prevented.

In technical terms, the UCI random gate adds a random delay of 0 to 2.5 seconds between the traditional “voice commands” and the first red light (out of 4 lights). With the cadence of the lights remains as before, riders can still utilize the traditional movement out of the gate.

The UCI random gate was developed by and is currently being offered by the UCI official gate supplier – Pro Gate www.pro-gate.com . It will be offered by other gate suppliers shortly. The technical specifications and voice-files are available through the UCI office.
Tweet

More in this category: « Tara Llanes seriously injured Staats 2008 Frames »
back to top