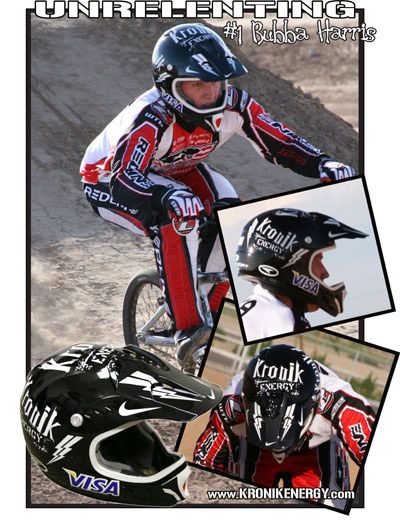 The ABA (American Bicycle Association) has teamed with Major League Baseball’s Texas Rangers to promote the sport of BMX at the Sunday home game, September 9, 2007. The promotion is the final of a five-game promotion that realized the distribution of flyers in multiple locations at the Rangers Stadium. The multiple-event distribution was a hugely successful promotion in cooperation with the Texas Rangers. This introduced tens of thousands of baseball families to the sport of BMX.

The Sunday Texas Rangers game at 2 PM will feature Bubba Harris, the 3-time ABA National #1 Pro racer, throwing out the ceremonial first pitch! Before the pitch is thrown, the crowd will be treated to a short video presentation on the stadium big screen. The action-packed video will introduce thousands to the exciting sport of ABA BMX racing and Bubba Harris!
Not to be left out of the excitement of MLB and BMX, aligning for this baseball game, representatives of two local ABA race tracks will be in attendance. The “Metroplex BMX” and “Cowtown BMX” track representatives will watch from a corporate suite and the top ABA membership recruiters from each track will also be invited. This will be a great day for these winners as they watch the Rangers and hang out with Bubba Harris.

ABA (American Bicycle Association), formed in 1977 and headquartered in Chandler, Arizona, is “The Sanctioning Body of BMX”©. The ABA organizes BMX racing for boys, girls and adults, nationwide and Canada. With 80,000 active members, 274 racing facilities and a 27 event-national race schedule; ABA is the largest promoter of action sports. For additional press information about ABA, the sport of BMX, ABA events or Professional racers, call (714) 666-1999. To find races in your area or view the national event schedule, visit www.ababmx.com..
Tweet

More in this category: « Staats 2008 Frames Current ABA racing standings 2007 »
back to top