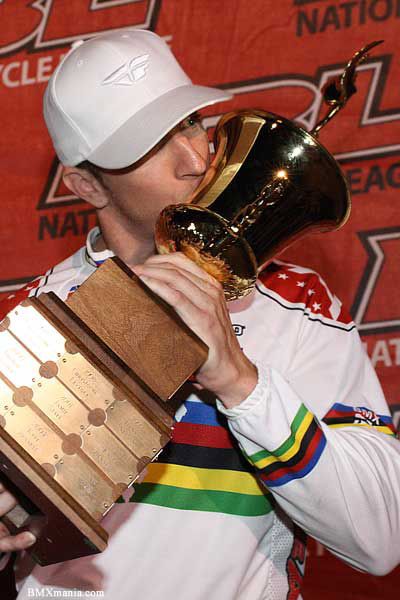 The 2007 NBL season has been one of the best NBL title chases in history. With a slew of great finishes from multiple riders throughout the season, the NBL title would be decided by the outcome of the main event. Cristian Becerine and Kyle Bennett went into the Grands just 2 points apart and it would come down to which of these two riders finished up better in the main event. 2006 NBL Pro #1 Donny Robinson still had a shot at the title as well, so it was going to be a all out battle for one rider to walk away with the NBL #1 Pro plate. This was by far the most anticipated event of the 2007 NBL season and the Double A Marketing Pros were up for the chance to win a #1 title. Here is how they finished up at the NBL Grands:

Kyle Bennett may just be the best Pro rider in BMX right now. After missing the start of the 2007 Season after having major surgery on his knee, Kyle came back in April in a big way, with some impressive results, including a slew of wins. 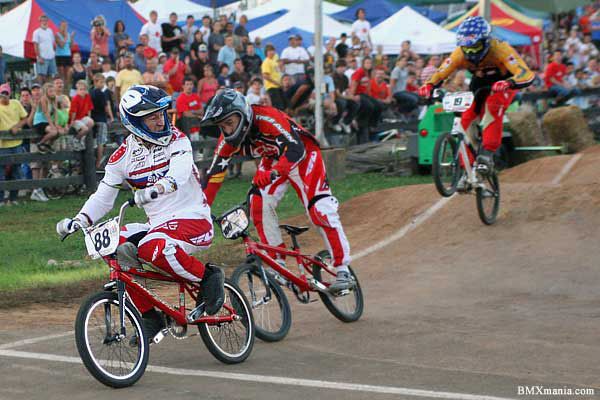 Kyle was very consistent in his NBL season and would just be able to get the needed number of races after the last NBL pro series event, leaving him in the #2 spot. In the end of July, Kyle capped of his overwhelmingly impressive season with winning the UCI World Title for a 3rd time.

Coming into the Grands, the weekend capped off with the UCI event on Friday night, and Kyle showed what he planned to do all weekend, by winning the main event in decisive fashion. On Saturday night, Kyle easily made it into the Elite Main event and the year long title quest would be decided by the one lap main event, as Cristian was in the main as well. As the gate dropped, Kyle held the slimmest of leads over Cristian and the two were side by side for the entire lap. Down the last strait away, Kyle pulled out a small lead by jumping a triple jump that no one was doing and this was the edge he needed to beat Cristian by half of a bike length at the line. Kyle and Cristian would tie in year end points, the first time in NBL history, but the tie was broken by the Grands main event, handing Kyle his 3rd NBL #1 Pro title. This makes 2 #1 Pro titles for Kyle in 2007 and now he has his sights set on being part of Team USA for the 2008 Olympic Games. With the determination he showed this season, he cannot be denied!

Cristian Becerine has had the most impressive NBL season of his pro career in 2007, leading points for most of the year. In South Park, it was an epic battle between Cristian and Kyle and the went 1st and 2nd both days, making the Grands an all out pressure cooker as he needed to be in the main event and beat Kyle by one spot to take home his first NBL #1 Elite title. Cristian and Kyle would wind up being in the same mottos all day as well as semi main, but he rode strong, just like he has all season and even won the semi, having him feel confident for the main event. Cristian had an inside gate, while Kyle was in lane 7, so he had another small advantage as the gate dropped. Cristian bonked a jump just before the 1st turn, putting him just behind Kyle going into turn one. The two were side by side for the rest of the track and it looked like Cristian was surging ever so slightly down the last strait away, but it just wasn't enough, as Cristian laid it all out and finished 2nd behind Kyle. Cristian was happy for Kyle and satisfied for a great season and knowing he did his best.

Randy Stumpfhauser for the first time in 5 years was not up for the NBL Pro title, but loves the Louisville track, so he decided to race at the UCI event and the NBL Grands instead of going to the ABA event like many other Pro riders. This was a surprise, as Randy sits in the #2 spot in the ABA Pro title chase, but shows on how much he loves the sport of BMX and a great track. On Friday night, Randy was amped up in the UCI event and had a solid lap, as he finished up 2nd, just behind Kyle and gained some moire ever so important UCI points. These points will decided who is the first pick for the USA Olympic team. Come NBL Grands time, Randy was once again on point, until the semi event, where he did not transfer and had to sit out and watch the race action. In typical Stumpy form, he was there till the end, cheering on Kyle and Cristian and was excited for both. Randy is a truly stand up guy and is a true Professional.

More in this category: « Current ABA racing standings 2007 The U.S. Bicycling Hall of Fame Will Induct Bernie Anderson ABA Owner Bernie Anderson Recognized For his Contributions to BMX »
back to top