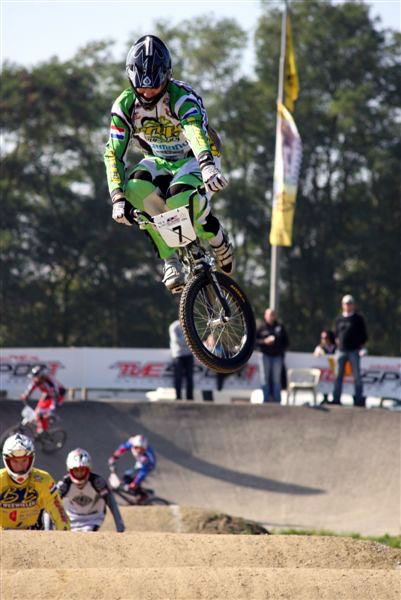 Crupi World Team claims 4 gold and 2 bronze medals at the UCI World Championships in Taiyuan, China. W1 12-year old Hannah Sarten of New Zealand worked hard to keep her title and take her place on the top of the podium. After a slow gate Hannah came into the first turn in 3rd place, but had the gold in sight. She stayed tough through the second straight, held a low line, went for the pass in the second turn taking over and holding the lead to the finish line. Hannah went on to take the gold in cruiser on Saturday for a first in the history of New Zealand!

Merle Van Benthem followed Hannah making sure the Crupi girls would shine. Merle came out of the gate and spent most of the race in second place. Coming in to the third turn she decided it was time to put her riding skills to use jumping the entire technical straight she took the lead and kept it all the way to the gold. She followed with a gold in cruiser where she left the gate in first place and never looked back holding it to the finish line assuring the Crupi girls with two double-doubles for the weekend!
Holland rider Jelle Van Gorkom (Jr. Men) charged his way to a podium finish in Jr. Men’s Cruiser on Saturday. Jelle had the first straight pull and went into the first turn in the lead, but a little bobble on the second straight was all it took to get passed leaving him in 5th position and having to make an aggressive pass in the last turn to secure that bronze medal.

Canada’s Scott Erwood was feeling lucky to be in China after a much needed win at the 2008 Canadian BMX Championships. Prior to this race Scott had not secured his position on the Canadian World Team and was feeling the pressure. We found that Scott does well under pressure when he won the race by three bike lengths assuring him a plane ticket to China. Scott was a little shy of making 1/4s in China, however it has been unofficially announced that Scott may be representing Canada in Beijing in August!

Christine Miller isn’t going to sit back and let Scott do all the work for Crupi Canada. She proved this when she powered her way to the top of the podium in the Canadian BMX Championships. Christine would love her shot at a spot on the Canadian Olympic team, however the ladies only get one spot and that seems to be secured. She will continue to train and push through in case she’s needed, and if not will be ready to go for 2012.

Hernan Santillan of Argentina showed up in China looking to be the newest rider on the Crupi Argentina team. Hernan decided he had something to prove when he took the 13 boys class by storm claiming the gold. Hernan may just be showing up in Crupi colors soon, we’ll keep you posted.

Other Crupi World Team member showed up in China and gave it 100%. Franco Soriano of Argentina finished with a 5th in the 9 boys class. Reits Elnionis out of Latvia finished with a very respectable 4th place in the 11 year old boys class. Jay Schippers worked hard all weekend finishing with a 7th in class and 6th in cruiser. Older brother, Jordi Schippers gave it his all and brought home a bronze medal in the 13 boy’s class. Jordi had his work cut out for him after getting caught up in the pack, but after the dust settled he ended up with a 3rd place. Nick Schippers (oldest of the Schippers brothers), came up a little short of making it out of quarters in the 15 Boys class, however I’m sure he is still feeling that his trip to China was worthwhile! Ignacio Cruz of Chile finished up in the 15 boys class with a 7th place making his trip to China one to remember. Liam Phillips was also there to represent Crupi, but had a little trouble when he got to see the dirt close up. Liam was okay after getting up and will be ready for the next race.

Keep your eyes out for Crupi’s Riley Bierbach and his Grandpa Jim. They have travelled from Albuquerque, NM to Pennsylvania in the past two weeks. Riley has been tearing it up making 8 out of his last 8 mains! In Albuquerque Riley finished with a 3rd place in cruiser and a 6th in class on Saturday, followed by a 3rd and 4th on Sunday. He and Grandpa then jumped in the truck and towed their Crupi trailer all the way to Pennsylvania to race in the rain and mud on Saturday. Riley is a Crupi Trooper, not giving up and taking 2nd in class and cruiser on Saturday, then going on Sunday to win class and take another 2nd in cruiser.

USA rider Tyler Brown had to take a break from racing to let an injury heal. While Tyler was training and healing he shot a commercial for NBC for the Olympics. It will be airing on NBC and is called the Olympic Mummy Commercial. Tyler was joined by Matt Pohlkamp, Mikey Brabant and a few others BMX riders so keep your eyes out. Tyler will also be representing Crupi on June 14, 2008 when he takes his spot on the gate with the other 7 USA riders chosen to race for the last spot on the USA Olympic Team.
Tweet

More in this category: « BAWLS PROs AND THE NBL GET THEIR G33K ON! UCI Announces Qualifying places for BMX Event awarded for the 2008 Beijing Olympic Games »
back to top