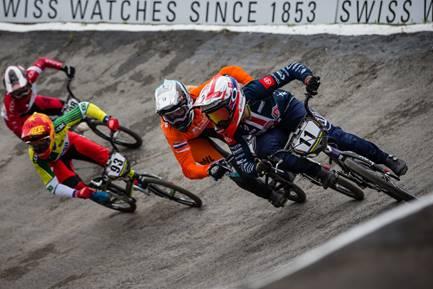 Alise Willoughby (Post) (Chula Vista, Calif.; Promax/GW/Klean/Troy Lee Designs) powered her way to another World Championship title today at the 2019 BMX Racing World Championships in Belgium. Willoughby, who won the rainbow jersey in 2017 as well, qualified for the finals after racing three qualifying motos. Teammate and current National Champion Felicia Stancil (Indianapolis Ind.; Supercross) also joined Willoughby in the finals. “Coming into this I was down in the dumps at the start of the day, I started my day on the ground.  You know coming into this I knew it was going to be tough with all the Europeans who have been here every week for the past year and in the rain. None of it was in my favor,” said Willoughby, “I’m really happy I rose to the challenge and I can’t believe here we are.”

After crashing in the second turn of the first moto of her day in the rainy conditions of Belgium, Willoughby was shaken up as she returned to the pits. After reviewing the footage from the moto, she returned to the track and progressively got stronger with her form returning as the competition rolled on. In her quarter final round, she qualified third in her moto. Three other U.S. riders, Stancil, Dani George (Palmdale, Calif.; Throdwn), and Ashley Verhagen (Phoenix Ariz.; Full Tilt/Radio) also rode in the quarter finals. Willoughby then qualified third in her semi-final moto behind 2018 World Champion Laura Smulders and Columbian Mariana Pajon. Everything came together for her as she powered out of the gate in the finals riding a great race, coming in .445 seconds ahead of Smulders to take the win. Teammate, Stancil, placed sixth.

Willoughby, the nine-time Elite BMX National Champion, got her start in racing when she was just six years old. She turned professional at the age of fifteen in 2006. After missing the 2008 Olympic Games due to their minimum age requirement, Willoughby went on to compete in both the London Olympics in 2012 and the Rio Games in 2016, where she took home the Silver Medal. She won the 2017 UCI World Championships in Rock Hill, S.C., and also earned a silver medal in 2015 as well as two bronze medals in 2010 and 2016.

“It was a good end to a long day here in Zolder, I’m extremely proud of Alise and her achievement today,” said USA Cycling BMX Performance Director, Jaime Staff, “The day didn’t start off great but throughout the day she slowly built her confidence up and it just shows you the caliber of athlete she is to be able to pull everything together when it counted. As for the rest of the team there are a lot of good things to take away from the competition. I’m extremely proud of a lot of our juniors I think they did very well. We had no idea how they would perform coming into the event because they haven’t had the opportunity to race against these riders in Europe. I think that this gives us a good idea of where we’re at with these juniors and this next group of Elite athletes coming up.”

The highest placed Elite Male was 2016 Olympic Gold Medalist, Connor Fields, in 11th place. In the Women’s Junior Category, U.S. riders Payton Ridenour (Pottstown Penn.) and Mckenzie Gayheart (Fort White Fla.; Full Tilt) raced in the finals placing fourth and sixth respectively. Cameron Wood (Avondale, Ariz.; Alpha) made it through to the semifinals before being edged out by Columbian rider Santiago Angel Suarez for the third slot into the finals.