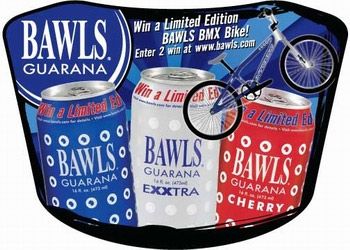 In continuation of the brand’s commitment to BMX racing, BAWLS Guarana announced the launch of a limited-edition line of BMX racing-branded cans, now available nationwide. Proceeds from the sales of these BMX cans will go to support the growth of BMX racing in the US. Fresh off the sport’s debut at the 2008 Summer Olympics, BMX racing is a still-growing force in the extreme sports community. Proceeds from all BAWLS BMX can sales will be donated to the American Bicycle Association (ABA) – the nation’s leading
BMX racing sanction – to benefit new track building, rider development and local racing programs.

BAWLS Guarana is a long-time backer of BMX– the brand serves as the “Official Energy Drink” of the ABA and is an active sponsor of several top level pro riders. “BAWLS Guarana’s involvement in BMX racing over the last two years has left me and our employees hooked!” commented Founder and CEO Hoby Buppert. “These cans allow us to thank the BMX racing community for their ongoing support.”

"We're very excited about the release of these new cans,” said ABA Marketing Director Shannon Gillette. “This shows the continued commitment that BAWLS Guarana has towards BMX racing and the ABA BMX programs. It's great working with companies like this!"

The cans will be unveiled the beginning of September in stores and race tracks near you. Can artwork also features the logos of the ABA and Intense BMX. The debut of BAWLS Guarana’s BMX cans also marks the start of the brand’s annual BMX contest, promoted on the limited-edition packaging. BAWLS fans can enter to win one of 25 limited-edition BAWLS BMX racing bikes, made exclusively by Intense BMX. No purchase is necessary to enter at bawls.com.

More in this category: « GODET & van den WILDENBERG TAKE REDLINE’s TO OLYMPIC FINAL War of the Stars Pro/UGP Open Championship NBL War of the stars Pro Results »
back to top