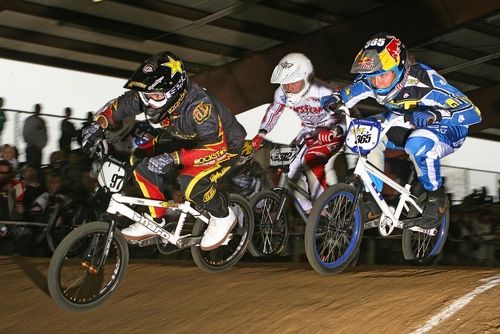 The American Bicycle Association hosted the Super Nationals this past weekend, March, 20-22 in Desoto, TX. In conjunction with the ABA Super Nationals, this was also the 3rd annual USAC BMX National Championships. Riders came from all around the USA to compete for the coveted Stars and Stripes jersey a shot at becoming a USAC National Champion. The weekend also had UCI events #5 and #6 and the top elite athlete form around the world were on hand. If you have never been to the Metroplex BMX facility you are missing
out on a real gem for sure. It's the first BMX only facility built in the world and Gary Elmore and his crew always pull out all the stops everytime the ABA comes to town. This year saw another great track rebuild by ABA's Billy Allen just a few weeks prior to the event. The track and facility were in tip top shape as always, but the Metroplex really wanted to WOW the fans so they brought in a Jumbo tron for the entire weekend. This was a great addition as the fans could watch the go211.com feed through out the weekend and the go211.com crew did an excellent job with instant slow motion replays and such through out the weekend. the Universal Sports filming crew was in full effect all three days as well capturing all the athletes in action for the up coming BMX Racing TV show they have been filming all season long. You can expect to see the show airing in the coming months. Be sure to watch for the press release real soon! 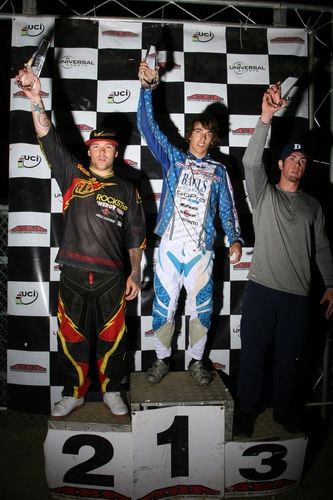 The 2009 UCI Continental events are in full swing now and the ABA BMX scene is really starting to get the format down. Having been around the racing scene since 1980, and talking with several of the top PRO's both past and present. Most will agree this just might be the hardest the PRO/ELITE class has ever been. The AA PRO/ELITE class is STACKED, STACKED, STACKED with comp and to even make a main these days pretty much means "YOU'RE THE MAN!" The fifth UCI event of the 2009 season was a crazy one for sure. Intense/BAWLS Guarana rider David Herman proved to all the fans you can't let a some bad luck on the track get you down. David came back from a terrible crash during practice to race for the day. During the moto rounds David then had a HUGE get off coming out of the first turn at the base of a jump when his chain derailed. It was a scary looking event for sure! 1/4 mains were posted an low and behold David made the cut and suited up for the 1/4 mains. Long story short David battled his way to the main event and was able to take a HUGE win on the day. David was due and has rode strong all season. It was only a matter of time before he was on top the podium for the day. Second place for the day went to ABA National #1 PRO Khalen Young. Khalen's the lead rider on the Haro squad and is living out his BMX dream of coming to the USA from Australia. Khalen has been a solid contender all season and has been proving to the media and fans his ABA BMX #1 title was no fluke. Third place went to one of the most consistant riders this season. "J-Rog" Jason Rogers was once again standing on the podium. Jason hails from Texas and is considered a Metroplex local by the fans and with an amazing 36 Elite Men on hand making the main is a impressive in it's own right. 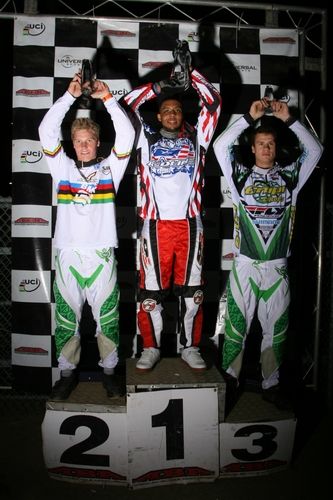 JR. Elite saw Redline's Denzel Stein lay the law down in JR. Elite with the HUGE win. Denzel really had the support of the home town fans this weeknd and truly lives up to his nickname of "The Peoples Champ". Formula's Sam Willoughby was going waaaaaaaaaay fast to say the least and it was know surprise to see him take the second place for the day. Crupi's own Jelle Van GORKOM was in the house from the Netherlands. Jelle has been hot on the scene this season and has been making a solid name for himself. This podium in Desoto, TX, really helps him out in the UCI rankings of 2009. 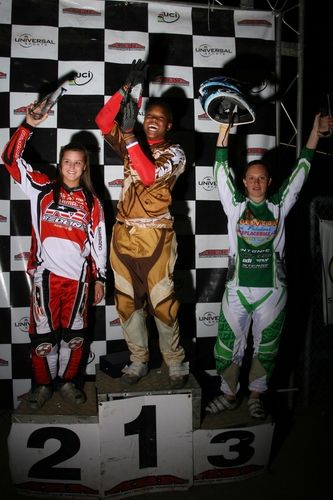 Elite Women went down like this, Dominating Dominique Daniels continued her win streak at Desoto TX. for the 2009 season. Dominique took the win both both days with Redline's Alise Post keeping here honest. Alise was wowing the crowd with her jumping skills down the second straight, but Dominique showcased her raw power down the first straight. It was a pretty good battle to watch for the fans. RaceplaceBMX and BAWLS Guarana rider Stephanie Barragan brought home a solid third for the event. 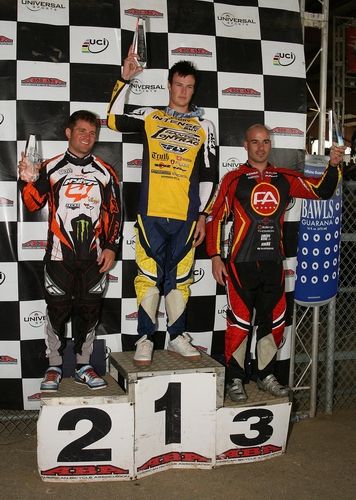 The sixth UCI event of the 2009 season saw a new set riders ontop the podium. Two time ABA BMX National #1 Nic Long was the an to beat on this day. Nic hails from San Diego, CA. is know stranger to winning UCI events. The Intense/Phantom/ON'TRAC rider won the UCI SX event last year in SLC, UT. and rocked the BMX world in the process. NIC and Khalen Young were battling for the lead going into turn with Khalen going down hard and leaving nothing but open track for Nic. Nic fought have the hard charging Donny Robinson for the win. "dR" Donny Robinson gave in his best for the day. The Hyper rider and Olympic Bronze medalist was out front a lot this weekend and looks to be aman with a plan for the 2009 season. Third place went to Oldsmar, FLA winner "Big C" Cristian Becerine!. The Free Agent rider is known for his incredible holeshots at all the big events. 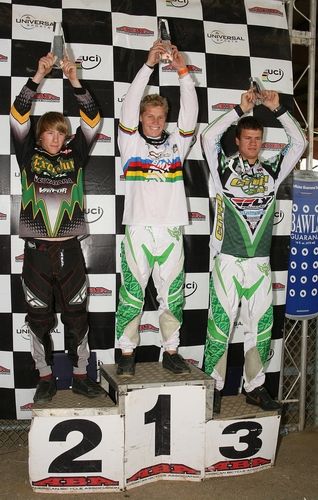 Day two UCI for JR. Elite was won by Australia's Sam Willoughby. The Formula rider and current UCI World Champ has been making big waves over here in the USA. Sam's an awesome rider with a great personality and he's pretty dang fast to boot! Second went to Excalibur rider Tommy ZULA. Tommy might have had the race of his life on this day. He opened an lot of eyes this past weekend and looks to be a big contender for a podium spot each weekend. Crupi's Jelle Van Gorkom was once again sitting in third for the day. Jelle is solid as ever and we're glad to have him in the USA racing the ABA scene. 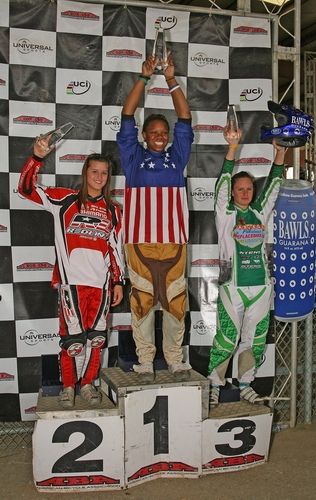 On the Ladies side once again defending Champ, Dominique Daniels took the top honors in the class. Redline's Alise Post was all over Dominique this weekend and looks to have plans to grab her #1 plate back this season. These two ladies really put on a great show for the fans. Once again RaceplaceBMX and BAWLS Guarana rider Stephanie Barragan brought home a solid third for the event. Stephanie has been SUPER SOLID all year long and is always a threat to win on any given day.