Written by Bart de Jong
Read 2817 times
Killer cover of KP ripping it up over a chain. You try it, you'll crash. It's weird to see the staff page of issue 49. 4130 wesite: Robin Fenlon, Publisher/Director: Mark Noble, Advertising manager: Tim March. If you've followed the publisher change, you knew this was coming but don't you worry, the mag hasn't changed. Colin Winkelmann RIP. Letters, Tight Set-Up and Reader photos are followed by Dig This news (and lots of it). The Flat Earth society concentrates on Lee Musselwhite. Then it's straight into the Videostore. The coverboy (Kevin Porter) gets a full on interview (10 pages) and so does Ricky Feather (10 pages). The wethepeople crew survived a trip to Poland and you can read the full story in issue 0049. Brian Tunney wasted some time transcribing the Bob Scerbo interview. Man, that must suck. Still 10 pages of coverage and 411 on the S&M rider with 4 piece bars. Options049 compares tires, 20 of them. Now go do a skid. The How-To is an over Ice pick and Back on a spine, performed by Edd Allen. If you're looking for cool X-mas gifts, the product page will help you out.
Read more
Reviews

Written by Bart de Jong
Read 3153 times
Now what does [twenty] have to offer you this time? The Red Bull elevation contest to start with (cover). Justin Kosman went to Colombia for a BMX race and reports from there. Colin Winkelmann 1976-2005 R.I.P..  The Pump section alsways has a bunch of good (party) photos. Some people will hate it, the rest don't. X-Games 11. If you missed it, [twenty] fills you in with 2 pages of photos, results and some text. The Dexter Hub (Cheap Profile) is featured in [Showcase]. If you're in the hunt for a pair of shoes and you can't decide, this issue isn't going to help. They show 10 pairs which makes it even harder to pick one. Metro Jam Vancouver, check. NBL Grands, check. Brian Castillo in 500 different looks; covered. Find the Sean Logan [I.D.] (bio) on page 76. Mike "Hucker" Clark shows how to do a nosedive 360 on the next page. Robbie Miranda puts in his [two cents] on page 80. He's damn right. We're missing those days where you actually had mud on the BMX track and you had to put your leg out (MX style) in the first turn when you were going speedway style. Racers want it so smooth these days that you could actually ride a "10 speed" on the BMX track. Put the MX back into BMX.

Written by Bart de Jong
Read 2854 times
BMX Plus december 2005
Ever noticed how the color of the font corresponds with the color of the cover pic in Plus!? This time it's the red of Ricardo Laguna's shirt that takes care of part of the content of the Dec. issue. From the cover you can tell that there is an X-Games report and who won the gold. 3 bikes get tested: Felt FUSE, Macneil WHITTON and the Diamond Back SHERMAN. There's an article called On the Move: Improve your flatland skills. For those who are stuck deciding what to give their best friends/loved ones for Christmas, the Holiday Gift Guide might actually help. The racing coverage in this issue of Plus! consists of the UCI World Championships in Paris and an NBL Race report. Colin Winkelmann RIP. Find the memorial jam report on page 10 and 12. The Nostalgia pic takes you back to a BMX race at Woodward Camp in 1988. That's Billy Griggs in the picture riding for Redline and sporting that popular numberplate that was screwed to the handlebars. Scott o'Brian talks about Flatland Worldwide. Tom Haugen's Free Agent bike gets inspected as well as Mike Parenti's Custom Giant. A flatland how-to follows. Really. Moving pics: nice still photos and a few sequences. A tech tip and the Parting Shot wrap up the December issue.
Read more
Reviews 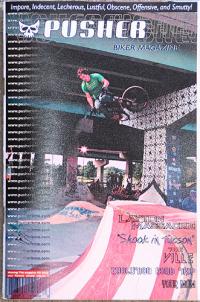 Clay Brown and crew have picked up Pusher magazine again. This time in a 'zine size but full colour. It looks damn dope that way. I love the 'zine size, it's easier to take with you without crumpling the book. Pusher has got 48 pages and it's an interesting read because they say it as it is. We like that style. The cover shows Van Homan at the Gravity Games but don't expect Pusher to be a "big contest" mag. Porn reviews and a photo of Troy McMurray with a bong is more like it. The content brings: Layton Massacre 50/50 comp, Shook tour in Tucson, The Ville (Gainsville report), Evolution Road Trip and a photo section called: "Visuals". Find the FATBMX advertisement on page 15. Find the Pusher banner in the Media section (left column) as soon as we hear back from them. We'd like to link it to their website: www.pusherbmxmagazine.com but when I tried that URL today, something else came up. Hmm, you can always write a letter to: Pusher Publications, 217 Pearl St. , Denver, CO 80203, USA. Or get a subscription for $15/yr (USA) or $25/yr (international). Hook a brother up.
Read more
Reviews 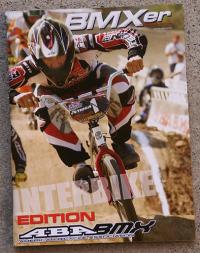 If BMX racing is your thing you're probably aware of the "BMXer" that comes out every month (except for February). The BMXer is the official paper from the ABA and is being sent out to all members of the ABA. It's possible to subscribe for $ 26,= USD but that probably only counts for people living in the USA. The September issue that we picked up at Interbike (it's the Interbike issue) has 152 pages of BMX racing reports, news, race schedules, ads and results. The Nationals that are covered are: Land o' Lakes in Minnesota, the Westshore Nationals in Canada, the New England Nationals in Rhode Island and the Mile High Nationals in Colorado. Also a race report from the ABA "World Championships" can be found on page 32. The paper inside is more like newspaper quality, the type that gives you black fingers. The cover is glossy full colour and sports Bubba Harris with the #1 plate.
Read more
Reviews 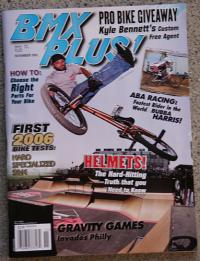 The ever relaxed looking Corey Martinez gets the cover with a topside no-foot cancan on his Bronze Federal. Justin Simpson shows he's got balls doing the manual that he does on the contents page. The Inside Scoop is always full of gossip and BMX news. We'll list some of the people who are celebrating their B-day in November: Jay Miron (November 3rd), Rick Thorne (11th), Simon Tabron (17th) and Nathan Penonzek (18th). Now send these guys an electronic B-day card and they'll wonder how the hell you know it's their B-day. They get a bag full of mail every month at BMX Plus! and some of them are answered by the staff or the BMXperts. The Nostalgia photo sure is old school. Blyther, Dominguez and Anderson all in the air at the same time on the Camarillo ramp. Okay, you're a pretty advanced street rider but would like to learn a 180 to 180 off, on a rail. Ian Munro shows you how. There's a HARO 06 (Nyquist three) bike test in the November issue. The ABA puts on a "World's" of their own in California and you can find a race report from page 26-35.
Read more
Reviews 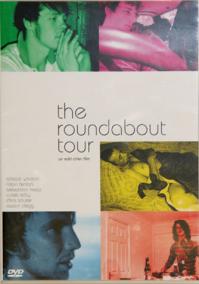 Cast: Robin Fenlon, Sebastian Keep, Alistair Whitton, Owain Clegg, Caleb Kilby and Chris Souter. Filmed and edited by: Edd Allen. One week on the road in the UK. What was the reason behind the tour, making a DVD or actually doing the trip? The reason behind the tour was for all 6 of us to meet up and spend a week riding together, most of us live at opposite ends of the country and Alistair lives in America so it's pretty rare for us all to just have a week together. We decided that a free DVD that comes with Ride would be a good way of getting the DVD out there so instead of getting 1000 made and selling them for Â£20 each we got over 20000 made and gave it away. Everybody's happy! Can people buy the DVD or was it a one-off with RIDE magazine? The dvd was exclusively with Ride UK magazine.
Read more
Reviews 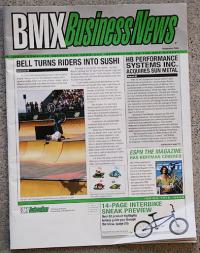 BMX Business News is your complete source for news and information on the BMX market. We haven't received it for a while but we picked up the two latest issues at the Interbike show in Las Vegas. The trade mag is published by Transworld Magazine Corporation that also brings out a Surf/Skate/Snow version that we happen to receive. The September 05 issue of BNN has got the following features: The date of Interbike, HB Performance Systems Inc. (not Hoffman Bikes) acquires Sun Ringle, Interbike Q&A, Effective purchasing, Interbike Sneak Preview and the Exposure meter. The articles that keep coming back for more are: Guest Editorial (by Maddog Moeller), One Company-One Question (this time with Bombshell/Avent), Shop Scope (Off Road Peddler - Houston), BMX Trends (what's selling in the shops?) and the Dealer Directory (a useful list of BMX related companies). If this sounds like something you'd like to receive in the future, use your business card and your signature requesting the publication.
Read more
Reviews 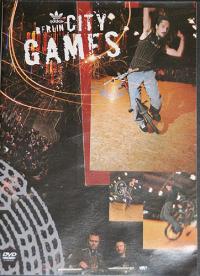 The Palast Der Republik was the venue of the first Berlin City Games, a pro and amateur flatland contest. The DVD we received in the FATBMX mailbox arrived right before the [url=//fatbmx.com/modules/news/article.php?storyid=923]second edition of the City Games[/url] and consisted solely about Berlin City Games 1 (2004). The production of the DVD was of a very high level as was the quality of the filming. It starts off with a 30 minute highlight of the event which, I believe, is the best part of the DVD. All the better tricks are pulled and edited to a 30 minute DVD of great flatland from pros (Kuoppa, Penonzek, Jumelin, Mike S., Sauter, Chiquet, Roese) to amateurs, a.o. Dez and Sytse from Holland. Jesse Puente gets a separate part in the bonus section but they might have well stuck the extra clips in the video itself. The bonus section also shows the work that goes into putting on a flatland contest (more than you'd think) and the separate runs from all pro and amateur finalists. This resulted in a bit of an anti-climax in the DVD because it shows that the pros and ams do get off their bikes during their runs on a few occasions.
Read more
Reviews 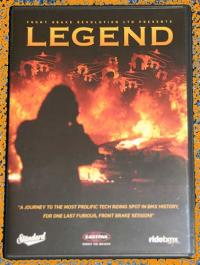 Rampage park in Iowa was going to close down but not before the FBR posse made it over for a session. Riders who showed up for the front brake tech session at Moliterno’s park included Osato, Anthony Pill, Ryan Nyquist, Chad de Groot, Freimuth, James Hitchcox, Eben Fischer and more high level tech riders. Legend is basically a video that covers the happening at Rampage plus a few extra’s like an insane Rob Ridge part, a pre Rampage road trip of the UK squad to Area 51, 4 Seasons and Terry’s Barn. If you like chaos, you’ll like the Hummer riding over two cars and all the fire that went on in that session. The riding covers roughly 30 minutes. A good part of that comes from Anthony Pearson who rips and seems to learn tricks on the fly. A bunch of riders get a riding part followed by a little interview where they talk about riding with a front brake, the event and Rampage. The video has a bronze feeling to it. It’s like having a black and white roll of film developed on colour paper. It didn’t disturb me.
Read more
Page 196 of 212