Written by  Bart de Jong
Read 26479 times
Thanks to DC's Rob Dyrdek, skate plaza's have gained in popularity. Here's a new one located on Marton Road, Middlesbrough, England. Lots of work went into this but the skate and BMX community have a place to go now other than the mall. The opening hours are: 9.00am-9.00pm, this will be subject to Enviromental health with regards to the lighting. Weekdays will be staffed by Andy: 4.00pm-9.00pm and weekends will be staffed by Alex 9.00am-9.00pm.
How it all began: 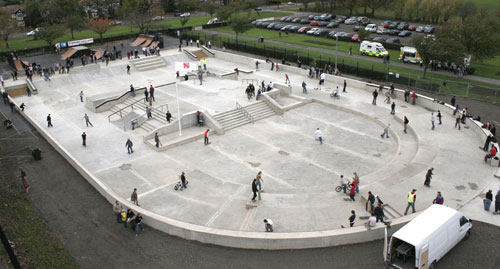 About 3 years ago, several petitions were submitted by local young people and skaters asking for a skate park in Middlesbrough. The Mayor, Ray Mallon took this on board and said that he would look into providing a facility in Middlesbrough. The Countryside, Parks and Open Spaces Development team were tasked with the job of:-

- Finding a site and location
- Finding the money to fund a park
- Consulting with local users.

Having never done one before, and knowing nothing about skate parks, BMX or skating, Paul Rabbitts, Policy and Development Manager for the Council took this on and immediately went to look at skate parks throughout the country – Sheffield, Perth, Livingston, Nuneaton, Carlisle, York, Coventry and started speaking to skaters, providers and looking at what this involved. It soon became apparent that this could be huge and also it was not about “sticking “ a few ramps on an old tennis court. Consultation was the key factor on:- 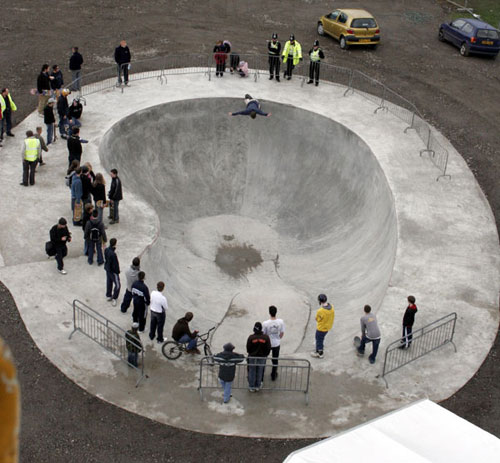 A flyer and questionnaire was devised and sent across the town and 2 major test events were held, both free, with the only proviso, users had to fill in a questionnaire. The response was massive. Prissick was the preferred site and Concrete and Skatelite were the preferred materials and it had to be a managed site.

The Design team was set up and involved a group called Prissick Skaters, a group of about 25 users who set about putting down design ideas. The demand was for a DC Plaza facility, designed by Site Design Group from Tempe, Arizona. They were commissioned to come up with designs on a Skate Plaza, the first in Europe. Site Design Group came up with the plans and the implementation team started to put costs together. At the same time, Paul Rabbitts was looking at how to fund the project. Costs were estimated at £500,000. Bids were submitted to Sport England’s Active England Programme supported by Big Lottery Fund (£80,000); SITA Trust, Landfill Tax credit scheme ( £100,000); Living Spaces (£25,000); and to Middlesbrough Councils Capital Programme (£245,000). The remainder was to come from developer contributions via the Council. All bids were successful.

It was then suggested that a visit was needed to Site Design Group to firm up designs and to basically “suss” them out. The Project Manager, Project Engineer and Dean “Bod” Brodrick, from Mischief skate store flew to Arizona to look at skate parks and plazas. 'Awesome!!' Bod enthuses, “we visited 6 parks around Tempe and everyone of them was different from the others in terms of features. Some more street orintated, some more transitions and bowls, but all of them were really well layed out and the construction was spot on. These were clearly who we needed for the job”

Managed and maintained by Streetscene Services, it is flloodlit, covered by CCTV, manned daily, and secured by design, it includes features from all over the world; Philadelphia (Love Park), San Francisco (Pier 7), various spots from Los Angeles, and Miami; and Barcelona, Spain.

More in this category: « Autumn Ramp Park to Open April 2006 Indoor Dirt Halle in Grevenbroich, Germany. »
back to top