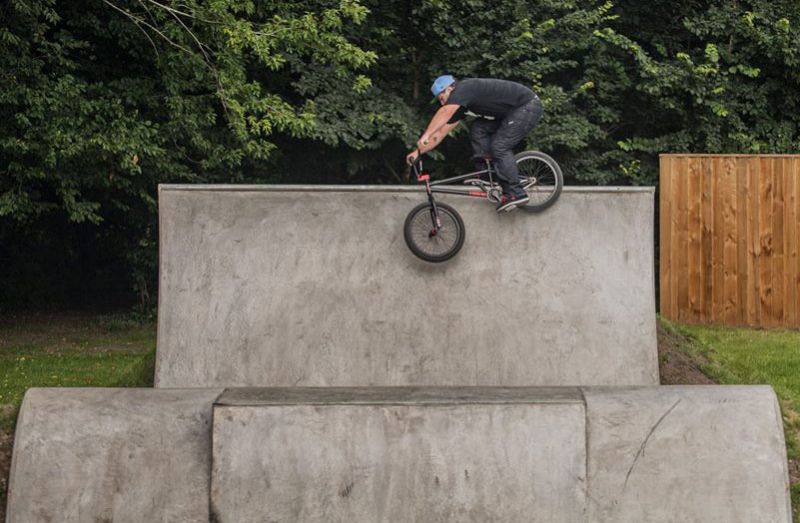 A few weekends ago (24th of August) I witnessed the grand opening of Knighton’s new skatepark (Knighton BMX / Skate Park). A few weeks before the opening day I was contacted by David Bennett (of the KB/SP committee) and asked if I could help make provisions for a BMX demo – I made some phone calls which resulted in the formation of a small demo team.

The team itself was called the Valleyside Stunt Team and 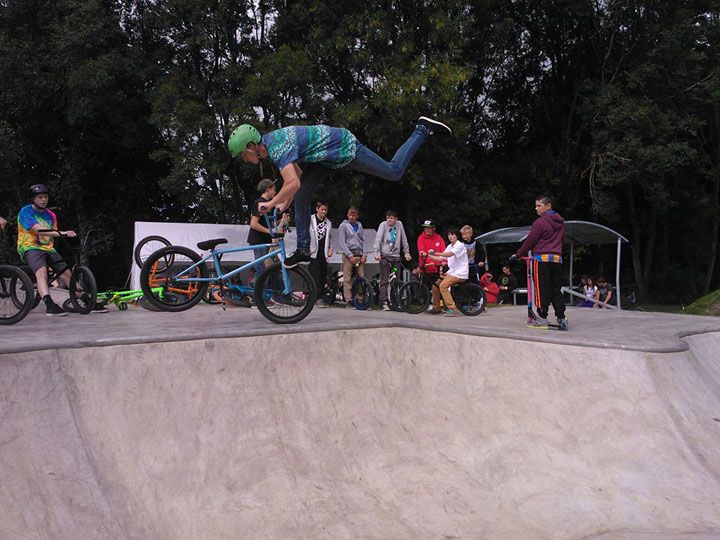 consisted of; Ryan Gorman, Gee Coles, Robbie Meade, Arron Whitaker and myself (Chris Smith). My role was to take photos, videos and notes whilst everyone else rode.

We left our base camp at 12.00 noon, with the aim of practicing from 1 till 3; then putting on a demo from 3 till 3.30. On arrival our first impressions of the facility were good – the park had a quirky charm, with some really neat features! The course itself had been constructed from concrete (Nb. high quality free-form spray concrete methods). I talked with David 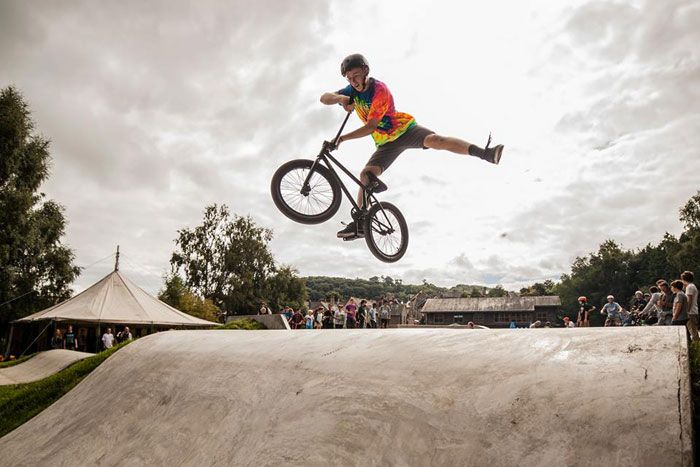 Bennett at the event who informed me that the facility was funded by the National Lottery Fund and currently sponsored by the Recycling Group.

The facility itself was located in a pleasant spot with good scenery (nice trees and landscaping); it could also be described as secure by design (numerous vantage points for the public). Furthermore, the facility has toilets and shops within a short walking distance! 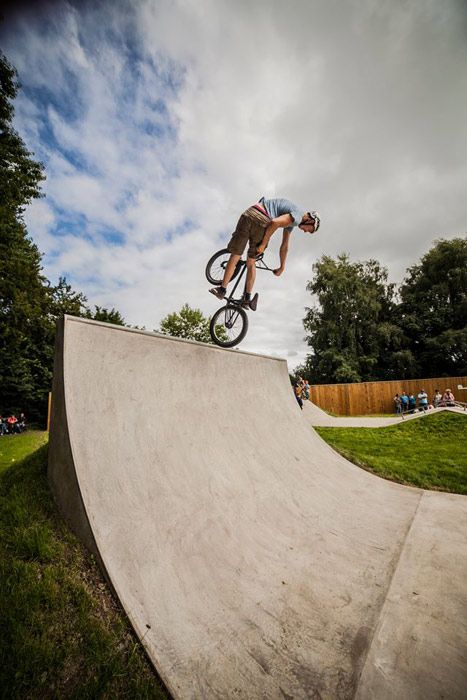 The event itself was very lively - bmx riders and skaters of all ages enjoyed using the new facility! What’s more, spectators, photographers, journalists and officials surrounded the course to watch the action.

I talked to the Valleyside Stunt Team at various stages throughout the practice phase – everyone seemed to like the unique nature of the courses design - the jump box, bowl and big quarter pipe seemed to be getting the most attention by the bmx riders, whilst the street section was enjoyed by the skaters - I feel this indicates a sensible layout/design.

At 15.00hrs the Valleyside Team started the BMX demo – with only two hours practice this perhaps seemed a daunting, yet plausible task. The demo was performed in a very casual jam format – it could almost be described as ‘tag-team’ time! As one rider finished a display the next rider would start. Highlights from the demo included:

-Gee Coles dropping a big 360 off the top of the bowl to the flat bottom! He was also nailing dipped 360’s over the box.

-Ryan Gorman impressed the crowds with a wild 180 Barspin 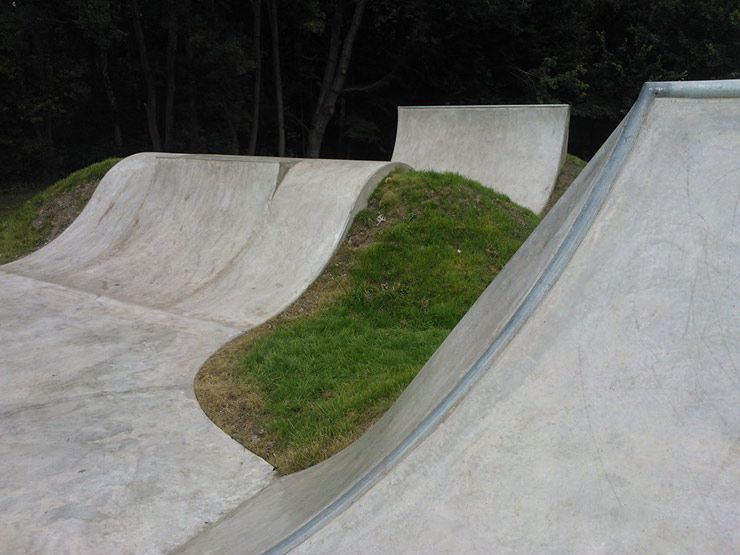 out of the bowl - a technical move done with style! Ryan was also throwing the most stretched Nac-Nacs over the box!

-Robbie Meade was also on fire with swift Tail-Whip Bunny Hops! He kept the Tail-Whip theme going with Foot-Jam Whips out of the mini/bowl section.

-Arron Whittaker was also riding on par, with smooth transfers over the hips and technical moves on the coping - this really helped the crowd to understand just how versatile skatepark riding is nowadays! All the team riders had a blast and loved the course! 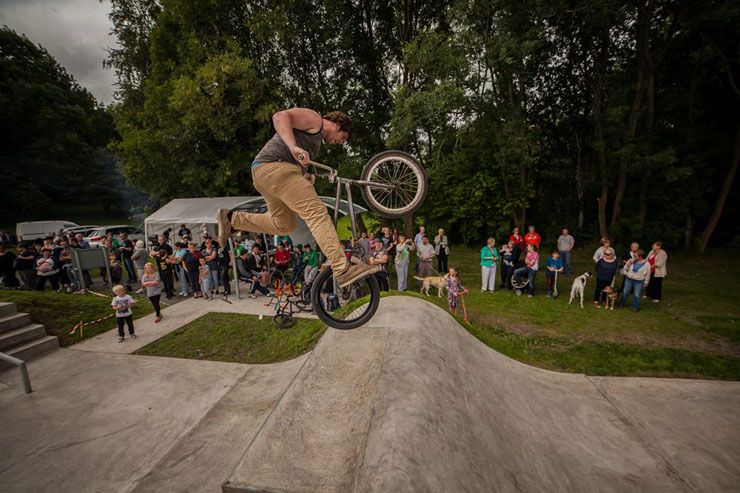 Other standout riders included Gareth Jones who blasted big airs out of the ramps and a wide variety of tricks during practice (t-bogs, turndowns and foot-plant variations)!

Whilst the event was taking place live music was performed by the band ‘Kaytown’ and supporting DJ’s; Boshdog, Stef Mo and the Clarke Bro’s! All of which were a treat!

I spoke with Ryan Gorman after the event who said; "It was good to perform in front of such a receptive crowd - they really gave their support and appeared to really enjoy watching the sport!”. Everyone on the valleyside squad also agreed the concrete was finished to a high standard – very smooth, yet grippy! 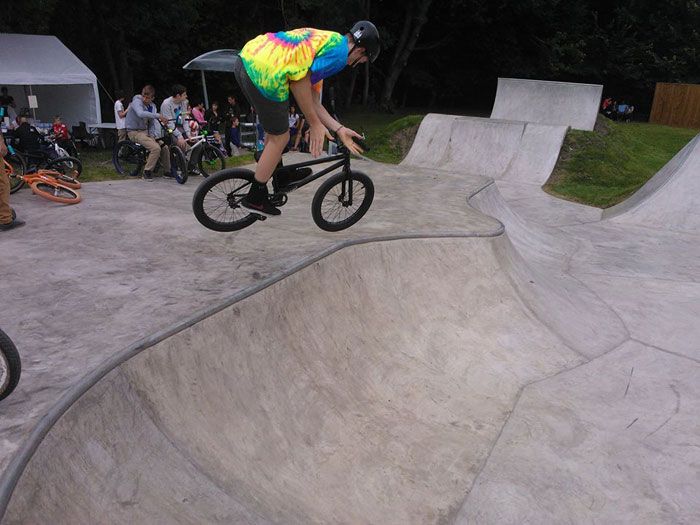 by Barclays (Knighton) Branch! The facility also has a promotional website which was supported by Cefnllys Ltd.

All in all a great event at a brilliant facility – let’s hope they make such events a regular treat!

More in this category: « Isithumba BMX Project 2013 by bmxdirect Dugtown- An Exeter Skate/BMX retrospective. By Tim Ruck. »
back to top