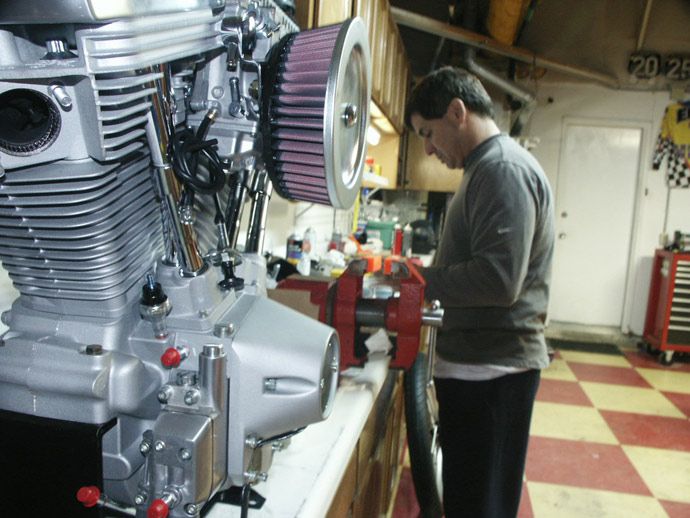 Occupation: I’m the founding partner at Revolution Advertising, a creative services agency that caters to the BMX and motorcycle markets. We’ve been working on BMX accounts big and small since I founded the agency in 1991. In ’99 my partner Bill and I founded SNAFU with my old friend Sherry Shu in Taiwan. More recently our agency launched an online media resource for the underground chopper scene called ChopCult.com. 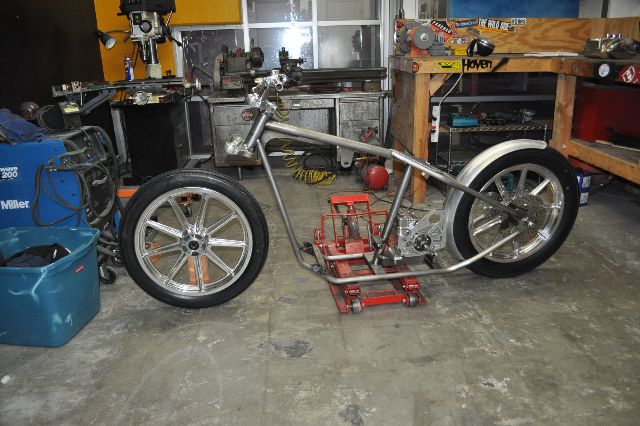 This was in the wake of starting Biltwell Inc. four years ago. Let’s see: Revolution, SNAFU, Biltwell and ChopCult … I think that covers everything. 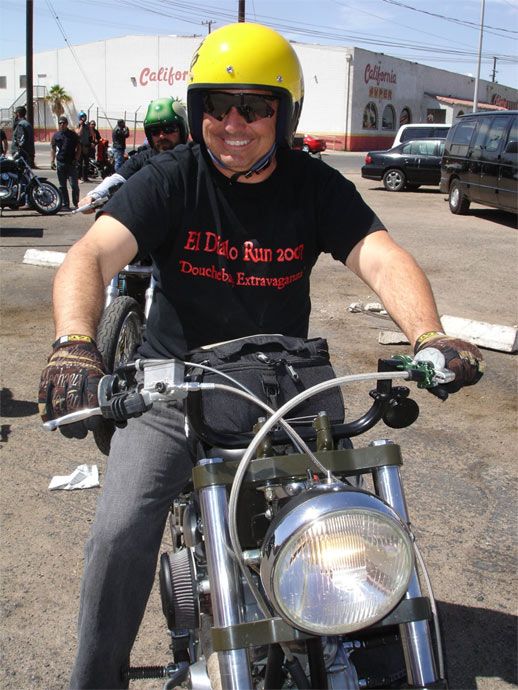 Can you explain in short what your involvement is in BMX?
Harold: There are a lot of moving parts in my daily grind, and about 25% of them are directly related to BMX. Our agency provides web- development, marketing and creative services for SNAFU and two other BMX accounts, and I also spend 4-6 weeks per year in Taiwan working on new products and projects for SNAFU. 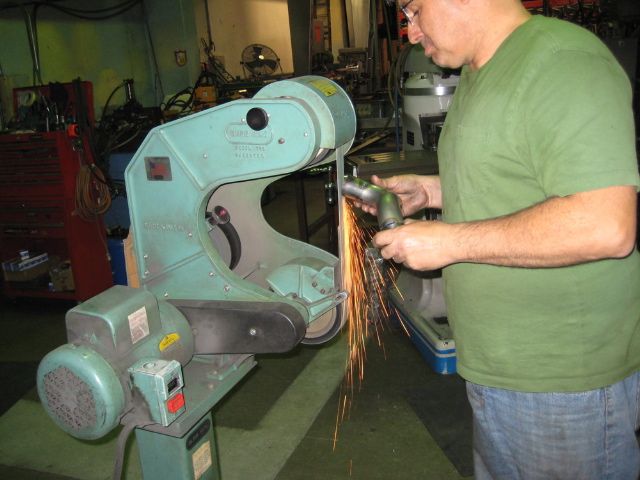 Have you always liked working on your (BMX) bikes?
Harold: My first real job was working at a bike shop called Princeton Cycles in Lake Worth, Florida, in 1975. I was 13 years old. I worked there until I went to college in 1980. I dropped out of college to work at Torker. I’ve been building bicycles since I was 10 years old. Frankly speaking, I have always loved working on and building bikes and motorcycles even more than I have enjoyed riding them. 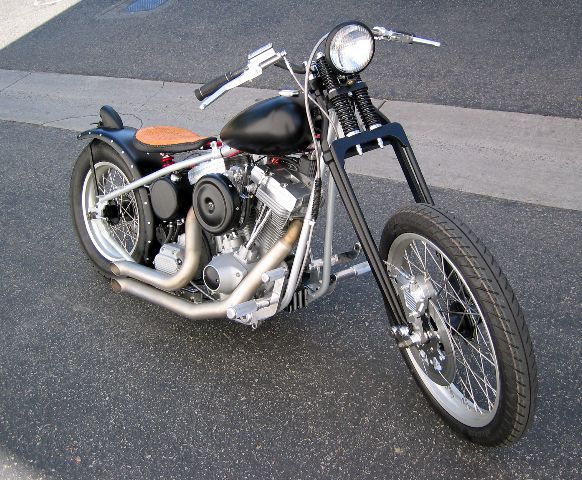 When did you start working on motorcycles?
Harold: I got my first motorcycle when I was 11 years old—a Montesa Cot 25 trials bike. My next motorcycle was an 80cc Chaparral minibike. My last motorcycle as a kid was a Hodaka Dirt Squirt. When I started racing BMX in 1974, I parked my motorcycles for good. I didn’t get another dirt bike until ’96 or ’97. It was a Yamaha YZ125 that my friend Kim Boyle and I stripped to the frame for a complete refurb. It was a roach, but it whetted my appetite for turning wrenches on motorcycles again. I’ve been messing with them ever since. 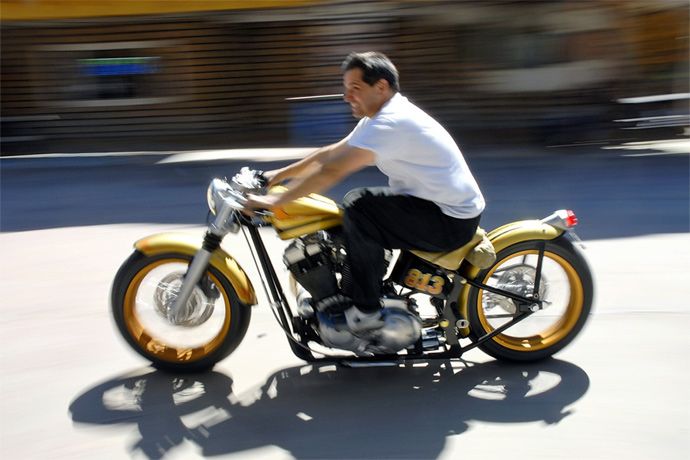 How many have you built so far?
Harold: Five bikes in five years, which given my total DIY education on the subject is something I’m proud to admit. The MasterGator, the Sportfighter, The Smokin’ Gun, The Street Tracker and most recently, the SpartanKiller. Yes, I’m one of those kooks who names his machines. They get names, but I’m not attached to any of them. As a matter of fact, I only have one: the CB450 Street Tracker. That thing will never sell for close to what I spent to build it, so I’m going to keep it forever. 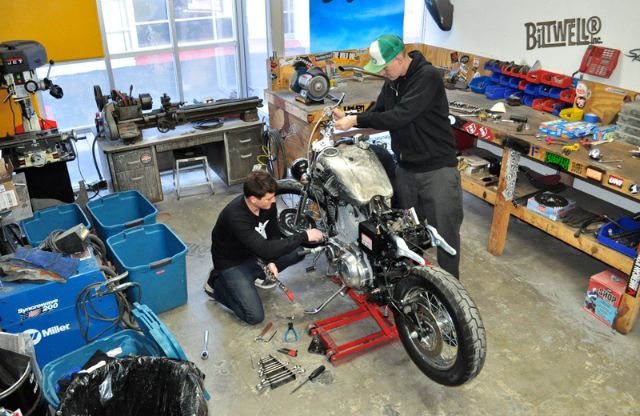 You seemed to have changed your warehouse into an awesome workshop. What machines do you have to play with?
Harold: We reconfigured our shop three two years ago to provide a space for SNAFU and Biltwell R&D. Until that time, I performed all my grease monkey business in my garage in Lake Elsinore. Today the shop has a mill, a lathe, a 200-amp TIG welder, a bench grinder and a half dozen or so electric hand tools for drilling, grinding and other dangerous stuff. Nobody’s lost an eyeball yet, but that day’s coming. 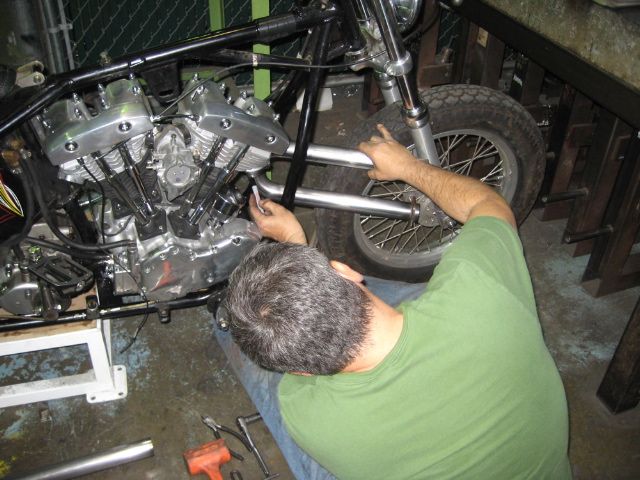 What is on the top of the list if you could choose one more machine for the shop?
Harold: I naively assumed a mill would be the most important piece of heavy equipment for chopper building, but I was wrong. The mill has worked out great for drilling, but now I think a lathe and a bandsaw are the two most important pieces of heavy equipment. I built my first two bikes with nothing but hand tools and an 8-inch bench grinder, so anything is possible. The big equipment just makes certain stuff like cutting and fabricating easier. 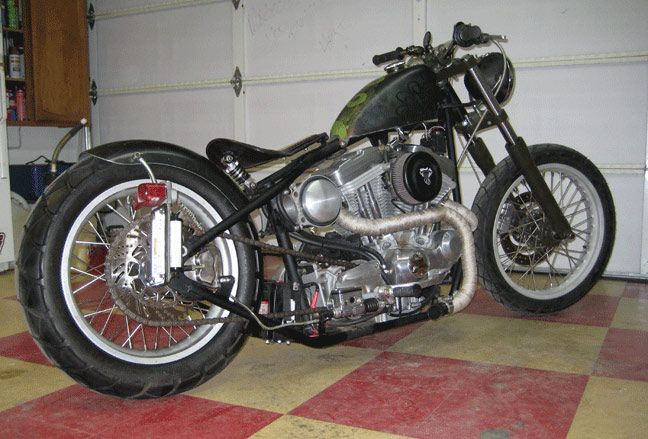 Do you consider yourself a designer, custom mechanic, or bolt-on type of guy?
Harold: Every motorcycle I have built has turned out within 95% of exactly how I pictured it in my head, so I would say that makes me a “conceptualist.” What I see is usually what I get. As time has progressed, I have become more confident and more competent in my metal fabricating skills. My welds are still unsightly, but they never break. When I see something I can’t make with my own two hands, I am pretty good at explaining how it needs to be built to whomever I contract for the task. I’ve got friends 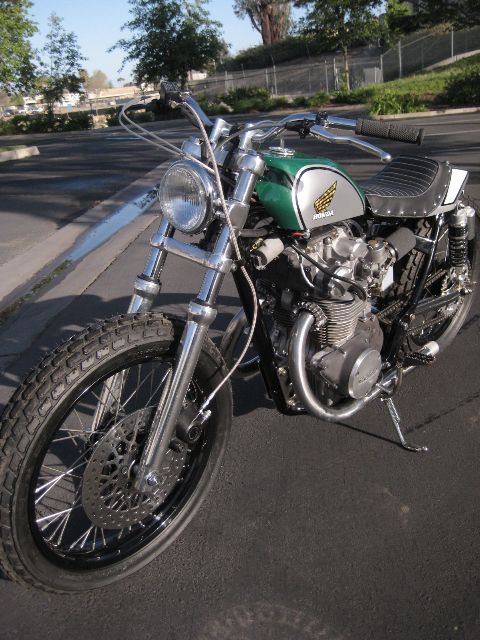 who are badass polishers, welders, lathe operators and milling machinists, so we can do almost anything. This month I am tackling the most challenging project yet: a combination oil can and battery box, made entirely of flat sheet stainless steel. This should be interesting.

What's so great about motorcycles and its crew compared to the BMX scene?
Harold: From a practical perspective, I enjoy the company of motorcycle guys because they are closer to my own age. Remember: I’ll be 48 this month— old enough to be Dan Norvell’s grandfather! Also as I mature, I feel myself losing patience for the fickle nature of trends and fashion in BMX. The chopper scene is certainly guilty of trend humping, but the current trend of lean, mean, stripped-down choppers is something I can relate to because the style and design is rooted in the dirt track racing and funky 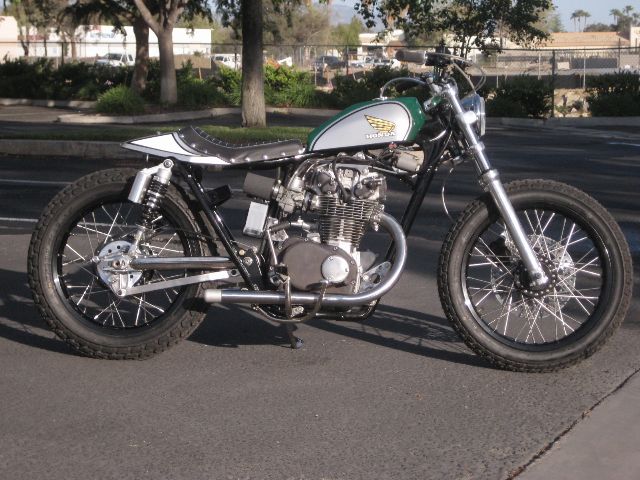 fashions of my childhood: ‘70s disco metalflake paint, On Any Sunday dirt tracking and desert racing, Euro MX and that sort of thing. BMX fashion today seems rooted in ‘80s new wave and ‘70s punk rock. I like bands like Soft Cell and X, but I never wanted to dress like them when I rode my BMX bike. Chopper guys dress for the part they are playing. Their comfortable blue jeans, black t-shirts, hoodies and denim vests make sense for the task at hand. What possible function does a zebra print bandana or size 12 girl’s jean bring to the table for dudes who grind down handrails? Seems overly fussy and fashion-obsessed to me, but hey—I’m a fat old man with nothing to lose and even less to prove. 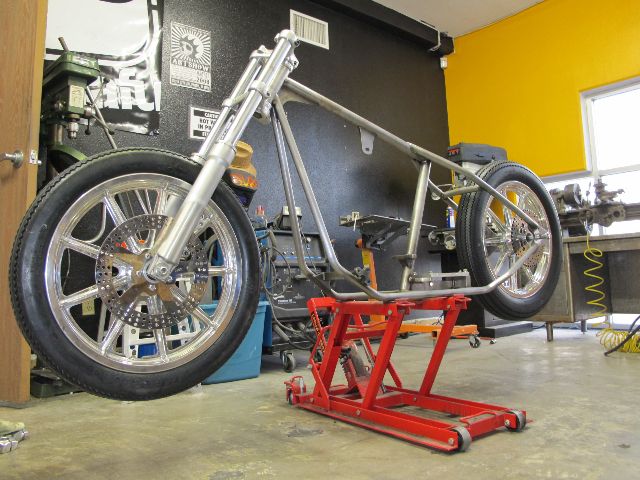 What style (of bikes) do you like?
Harold: My favorite handbuilt choppers blend the no-nonsense frame geometry of old racing machines with the reliability and affordability of a late-model Harley Davidson Sportster or mid-‘80s Japanese motor. I love the compact stance of any style Harley V-twin engine when it’s assembled in a bike with cleverly designed—not decorated—parts. I don’t care for bikes with “apehanger” handlebars, super-long forks, super-fat rear tires, or theme bikes of any kind. Just because you can build a motorcycle that looks like Spider-Man’s firetruck doesn’t mean you should. 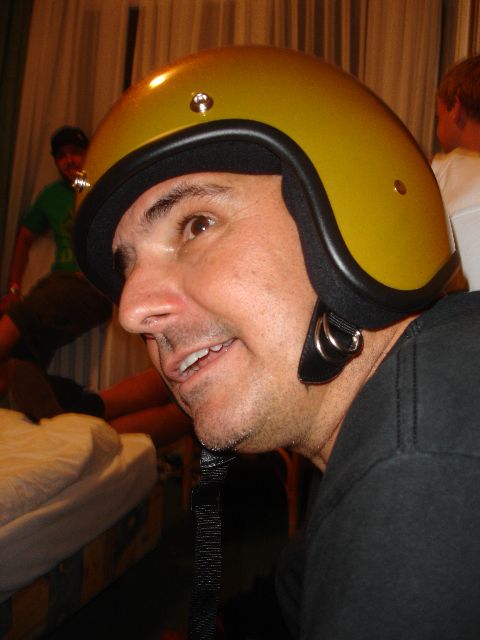 What's the best bike that you put together?
Harold: Easy—last year’s ’72 CB450 Street Tracker. I custom-fabbed more parts and mechanisms on this project than any bike before it. The Street Tracker has a CB450 race motor, a CB750 swingarm, a set of ’99 Sportster forks, a ’75 CR250 drum brake, front Harley narrowglide hub with disk brake, and full ‘70s dirt track-inspired fiberglass tank and bodywork. It looks like the MX and dirt track racers I craved in my youth.

Projects for 2010?
Harold: At the rate the SpartanKiller is going, I don’t expect to be finished until late spring. I promised myself I wouldn’t start another project after last year’s Street Tracker, but chopper projects never go according to plan. The SpartanKiller is special because it is the accumulation of assistance and contributions from many friends in the scene. I owe it to these people for this bike to look nice, so I am taking my time. I’ll keep you posted. 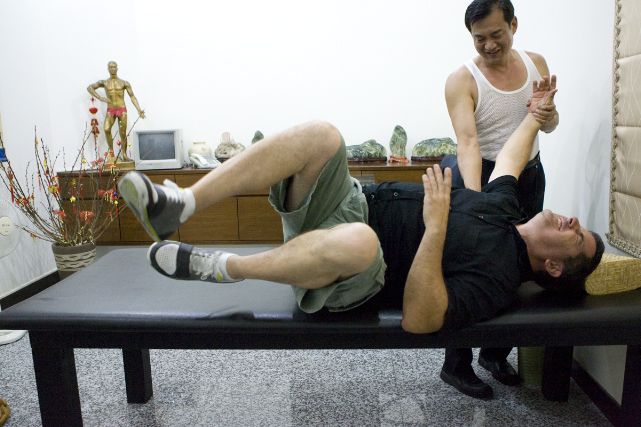 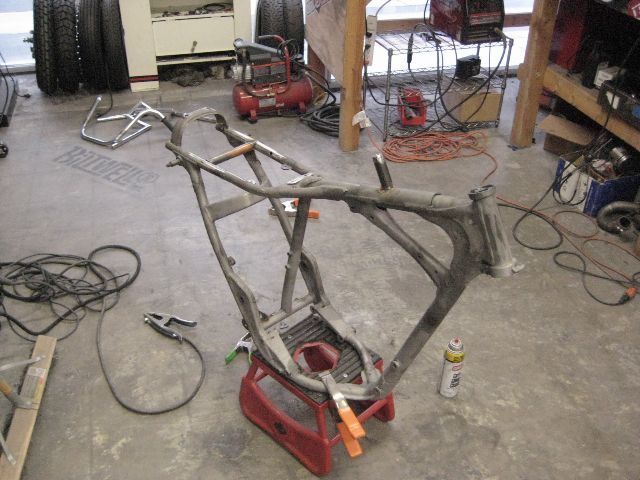