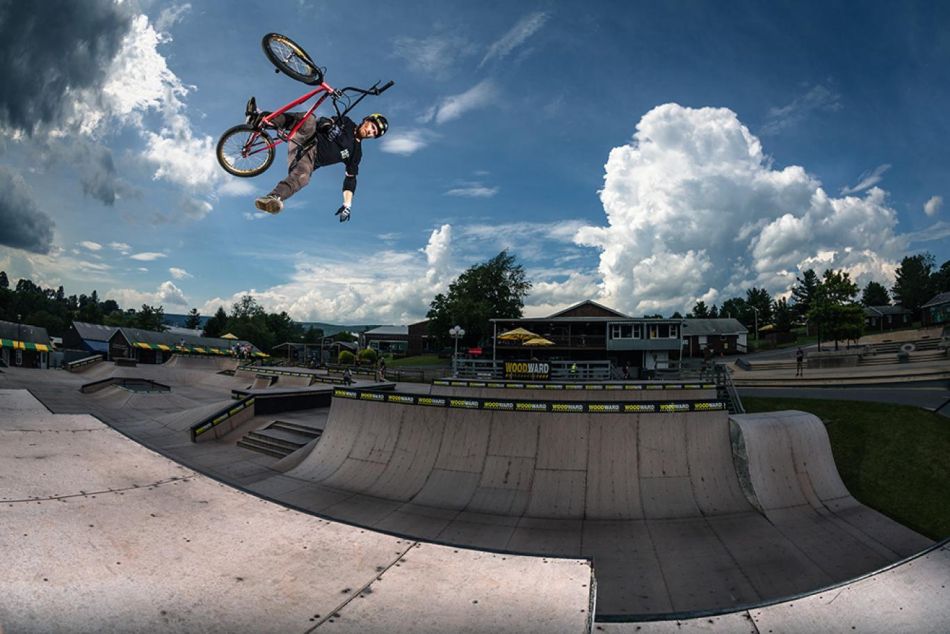 USA Cycling and Woodward - a global experiential action sports company - create a pathway for riders of all abilities with their new partnership lasting through 2028. From beginner BMX riders all the way up to Team USA, this partnership provides a constant platform for learning and progressing year-round. In addition to hosting the USA Cycling BMX Freestyle Nationals Championships and the USA Cycling Olympic Development Academy, Woodward becomes the official training facility and sponsor to the BMX Freestyle National Team.

“This partnership between Woodward and USA Cycling furthers my commitment to coach and support U.S. BMX athletes and encourage riders of all ages and abilities to pursue their dreams,” said 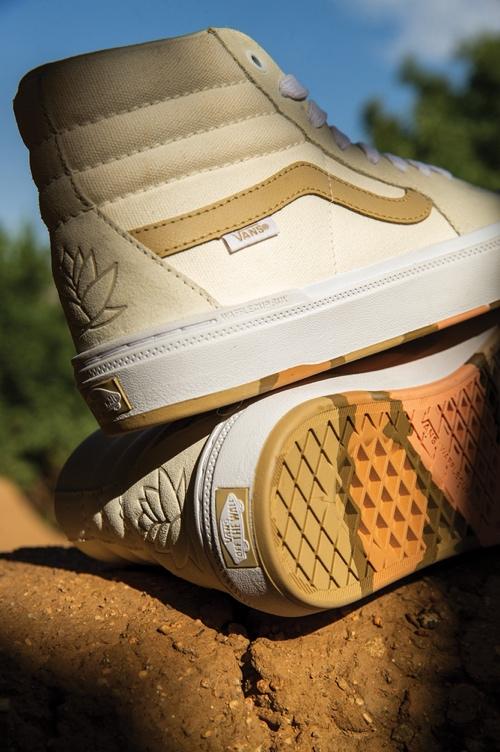 Vans, the original action sports footwear and apparel brand, is proud to unveil a new colorway of the Sk8-Hi® BMX created by Angie Marino, the perfect balance between BMX performance and a timeless design brought to life through the eyes of one of BMX’s most talented riders. Constantly pushing the limits of progression, Angie’s riding demands a shoe that’s as strong and as committed to BMX as she is. The Sk8-Hi® BMX meets those demands with Vans BMX Wafflecup™ construction for maximum pedal feel and durability. For her take on the silhouette, Angie worked with Vans to bring in her personalized floral art and soft tones, which also carry over into a curated apparel collection.

The Sk8-Hi BMX by Angie Marino features PopCush™ footbeds for maximum energy return and a DURACAP reinforced rubber underlay to protect high-wear areas. A protea, her favorite flower, come to life in a tonal deboss on the heel counter and in soft peach and earth tones on the outsole.

“I chose a flower as a soft representation of how I currently see the women's BMX scene— it's in full bloom and not slowing down,” Angie said. “The Sk8-Hi BMX is one of my favorites to ride in. The extra ankle support at the top makes a world of difference for riding.”

Angie and Vans are also excited to present her first-ever apparel collection with the brand, including a lightweight short sleeve boxy tee and boxy hoodie incorporating a similar color palette and hints of floral that take cues from her favorite season to ride: Spring. Both pieces are finished with Vans’ Checkerboard detailing, and Angie’s signature on the hoodie’s sleeve. 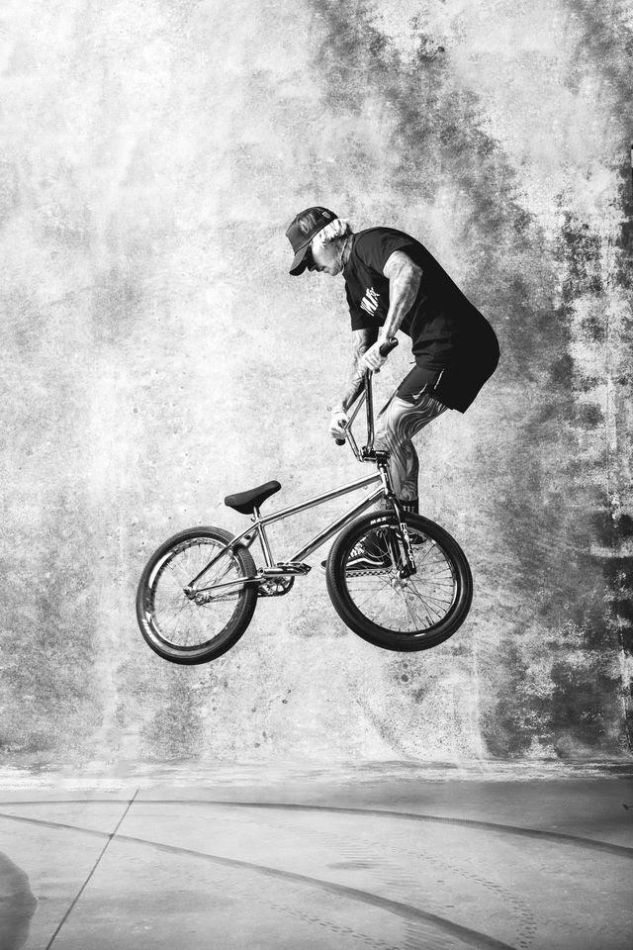 Started on the Monster Army, now he’s here! Monster Energy is proud to welcome BMX trick innovator and X Games medalist Jeremy Malott on Episode 28 of the sports and pop culture podcast UNLEASHED with The Dingo and Danny. Released today across Monster Energy’s social media channels, the latest one-hour episode sits down with the 24-year-old BMX talent from Lake Havasu City, Arizona. In his ongoing career, Malott started as an entry-level rider on the Monster Army amateur program. He advanced all the way through the ranks and made his debut as a fully sponsored Monster Energy pro rider in 2021 thanks to his constant drive for progression.

“There are infinite tricks that you can learn. There’s so much possibility. There’s never a stopping point in progression!” said Malott on the new episode of UNLEASHED.

BMX fans can now hit the play button (and Like and Subscribe) on Episode 28 of UNLEASHED featuring Malott. Released today, the new podcast recorded at Studio M inside Monster Energy headquarters in Corona, California, is streaming on all major platforms, including Spotify, iTunes, and YouTube.

Growing up in California’s High Desert, Malott began competing in motocross and BMX races at age 10. But once he discovered freestyle BMX, especially technical aerials, there was no holding back: Malott wrote BMX history by landing the world’s first 360 Triple Whip to Bar Spin and took first-place trophies in Best Trick events across the globe. Over the years, he paid his dues as a Monster Army recruit and 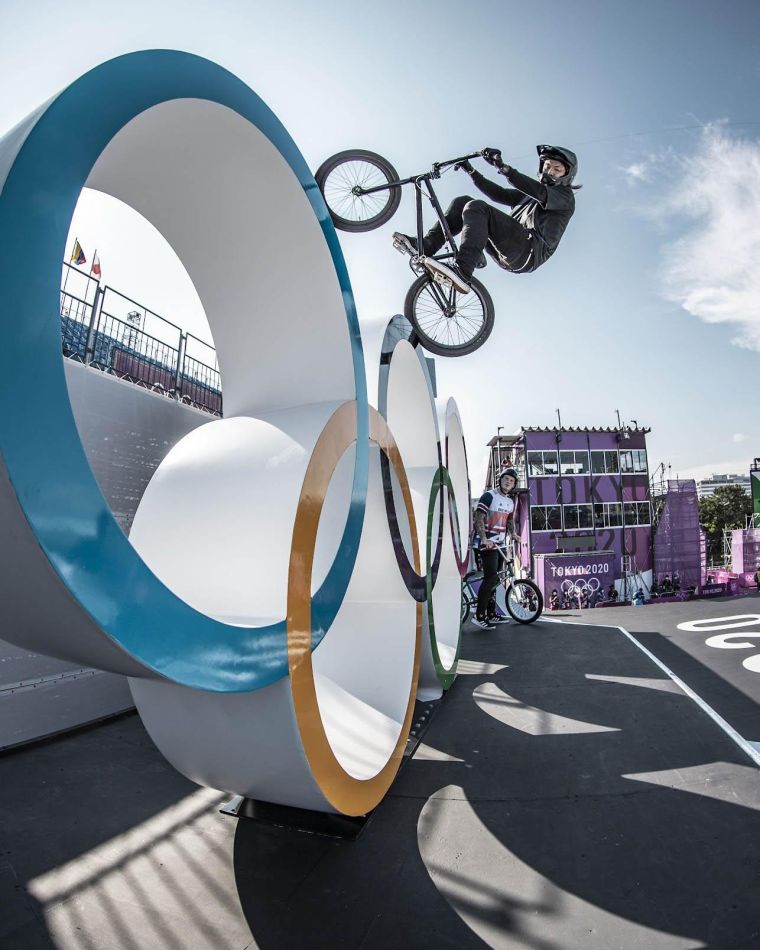 The International Olympic Committee (IOC) is launching a new four-sport Olympic qualifier series for Paris 2024. This is an Olympic Agenda 2020+5 project, which was presented today to the IOC Executive Board. The new IOC-led Olympic qualifier series will include four sports – BMX freestyle, breaking, skateboarding, and sport climbing. The series of three festival-style events will bring together the best athletes from each of the four sports in one urban park, as they compete to qualify for the Olympic Games Paris 2024. Hosted in compact city centre venues over four days, between March and June 2024, the festivals will offer a new Olympic experience to fans from around the world, blending sport with music, art and culture.

The qualifier series builds on recommendation 6 of Olympic Agenda 2020+5 “Enhance and promote the road to the Olympic Games.” The IOC will work closely with the four partner International Federations – the International Federation of Sport Climbing, the Union Cycliste Internationale, the World DanceSport Federation and World Skate, which will remain responsible for the running of their respective competitions – to use the power of the Olympic brand in order to enhance the exposure of the athletes and their journeys on the road to Paris 2024. These three events will form part of the respective Paris 2024 qualification systems for each sport. 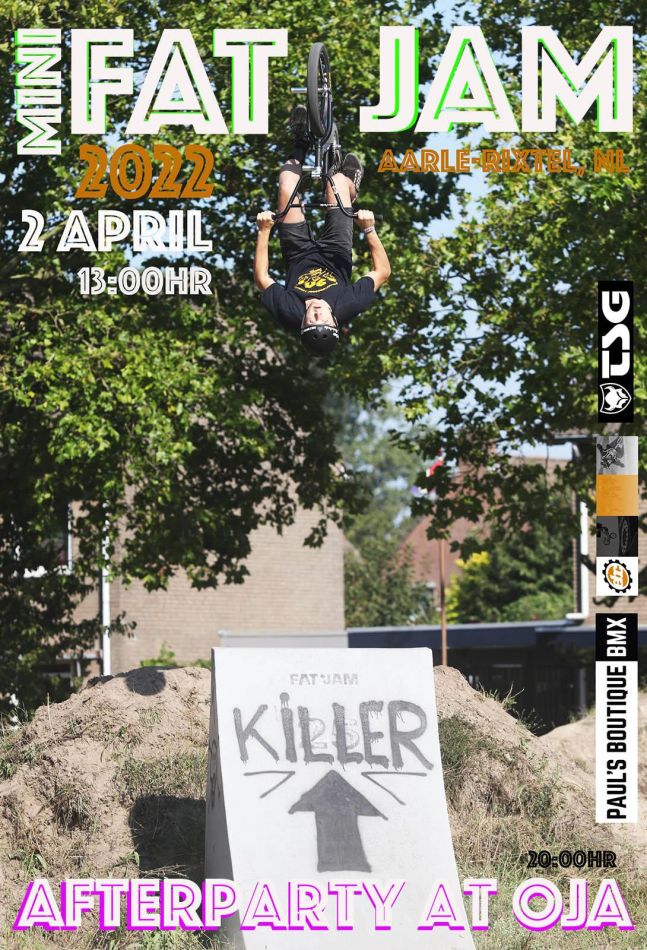 The Sugar Hills trails in Aarle-Rixtel really started running back in 1990. It was also the first year a jam was thrown to open up the outdoor season. The March/April date remained on the calendar for the following 30 years. The name of the jam was dubbed the Mini FATJAM as the younger brother of the FATJAM that has taken place in the same town since 1988. Unfortunately over the past two years the global pandemic forced us to pull the plug and no events were possible in the way we envison them; having fun together. But guess what, the Covid situation is allowing us to invite the BMX family and friends to make a trip down to Aarle-Rixtel again on 2 April without any restrictions as long as we don't exceed the 500 maximum capacity. So do yourself a favour and make sure you show up early in order to "get in".
Bring your bike, a chair, your friends, some food, drinks, a good mood and you'll fit right in. Red Bull will handle the wings for the riders and their sound car will be set-up for tunes all afternoon. It's free to participate, it's free to spectate, it's free to park, it's free to use the toilet. We've collected some goodies from our sponsors (Thanks to @ridetsg / @paulsboutiquebmx / @fatbmx) so make sure to join the special session at the Sugar Hills Trails at 16:00hr. The trails are open for a session starting from 13:00hr and offer smaller jumps for beginners and the KILLER jump for the pros. It's an opportunity to ride dirt even if you are not a 'dirt' rider. The trails can handle some serious rain so no worries about the spot not being rideable even when snow is expected in the days leading up to the Mini FATJAM. We will ride! 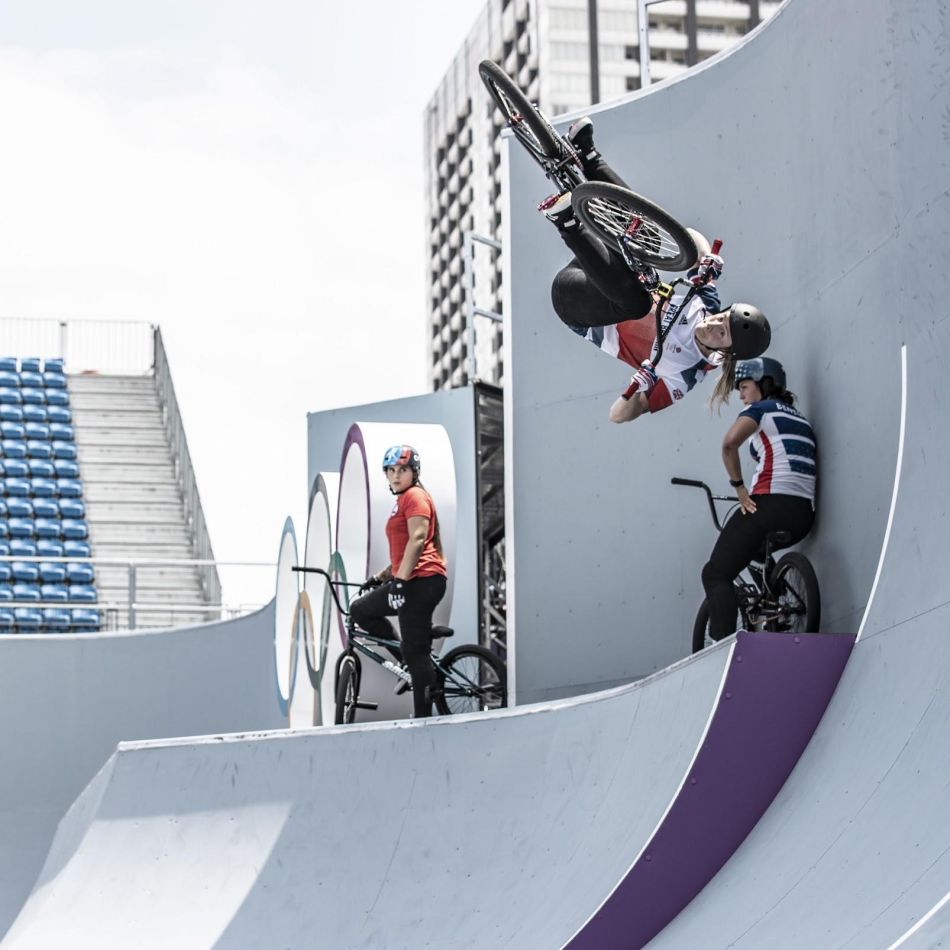 Following breakthrough successes at last summer’s Olympic Games in Tokyo, British Cycling can today announce the dates and venues for the organisation’s first BMX Freestyle National Series and 2022 BMX Freestyle National Championships, working alongside experienced event organisers Backyard Jam. With an ambition to harness the inspiration of Charlotte Worthington and Declan Brooks’ inspiring performances in Tokyo and support more people to ride, compete in and watch the discipline, the six-round series will take place from April to October, with rounds in England, Scotland and Wales, and with categories for elite riders, amateurs and youth riders aged from 4-14.

Riders will have the opportunity to compete in both Park and Street categories, with national series winners and national champions crowned over the weekend of 22-23 October at Adrenaline Alley in Corby, home to the Great Britain Cycling Team freestyle park squad.

Declan Brooks, bronze medallist at the Tokyo Olympic Games, said: “It’s been great to see the 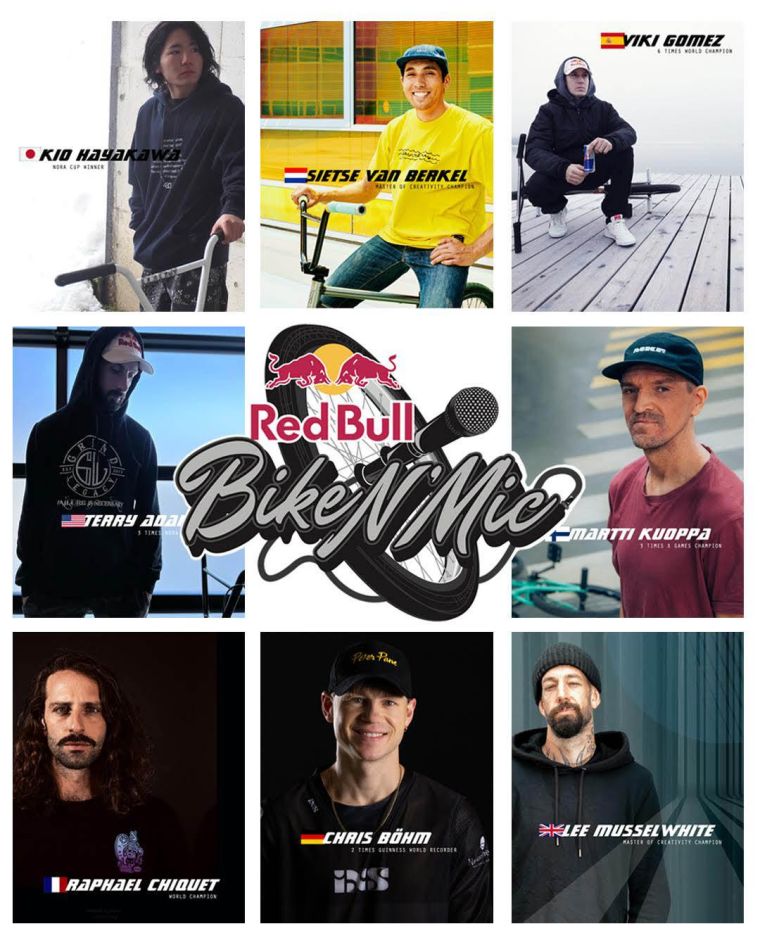 Together with ggmimage.com we wanted to bring together the amazing energy of Bike N Mic ( BMX & Hip Hop ). I traveled the world during the past 22 years and when I do shows I include the competition tricks because this defines me as an athlete. It happened very often that there was a lot of magic in these moments! Therefore we thought on bringing together the amazing line up of riders who can deliver both: an amazing show skills connecting with the crowd and epic competition tricks to let everyone with a WOW.

The public will vote with an app that measures the decibels. So riders need to connect with the crowd and still deliver amazing tricks! It’s a big challenge full of good vibes! All riders win as they will have their own time on their demand.

But don’t forget they are warriors and they will fight for the Podium! We will have one contest on Saturday and one on Sunday.

It’s a new concept and we can’t wait to see the results!

Thanks to all the sponsors and everyone involved!

FISE IS BACK AND BIGGER THAN EVER WITH AN ACTION-PACKED CALENDAR OF EVENTS FOR 2022. 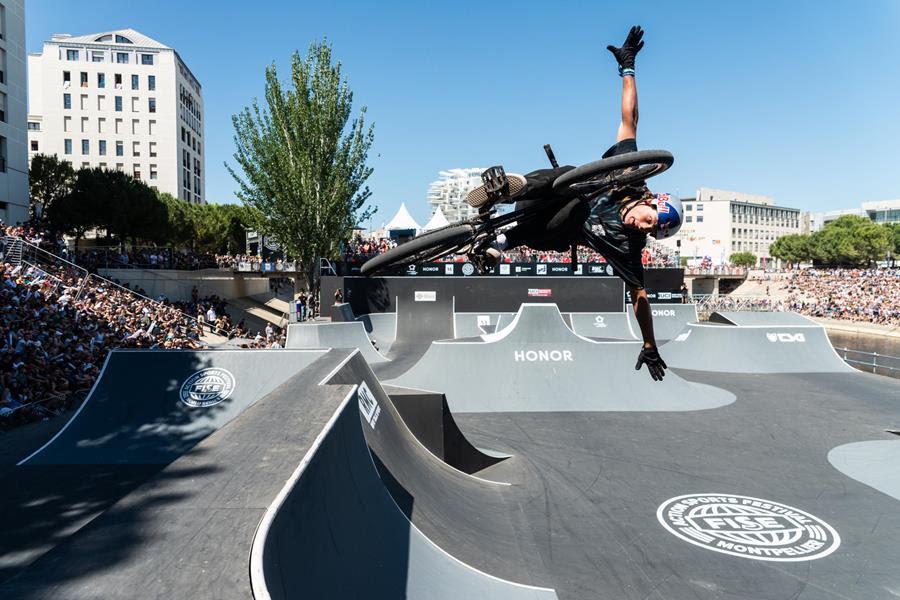 This year FISE has a huge programme of events for riders and fans with 15 events confirmed for the season so far. Check out everything that’s on the agenda and stay tuned for more information about all these events and new events coming soon. 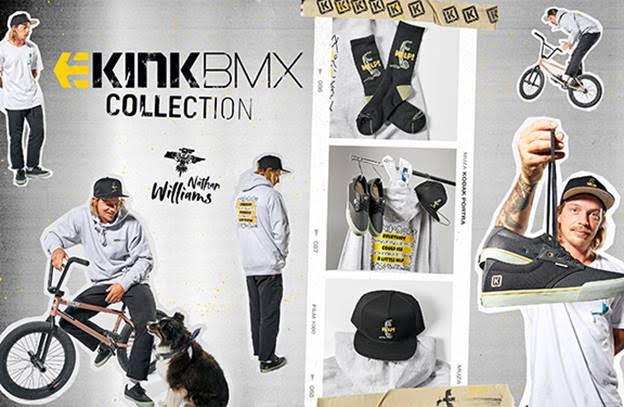 etnies team rider Nathan Williams linked the brand with Kink BMX for a one-of-a-kind capsule collection of footwear and apparel that is available globally today. Nathan and fellow etnies and Kink BMX team rider Hobie Doan took the new gear out for a session in San Diego. The etnies KINK BMX Collection includes Nathan’s favorite Jameson Vulc, the new Wallride one-of-a-kind chino pant built specifically for BMX, as well as a hoodie, tees, hats and socks. On the hardgoods side, KINK BMX will be releasing the Williams signature frame with other accessories as part of this collaboration.

Help! Nathan feels that everybody could use a little help. From the socks to tees, hoodies and hats – Nathan took inspiration from his Help Mfg brand for the graphics of the etnies KINK BMX Collection. 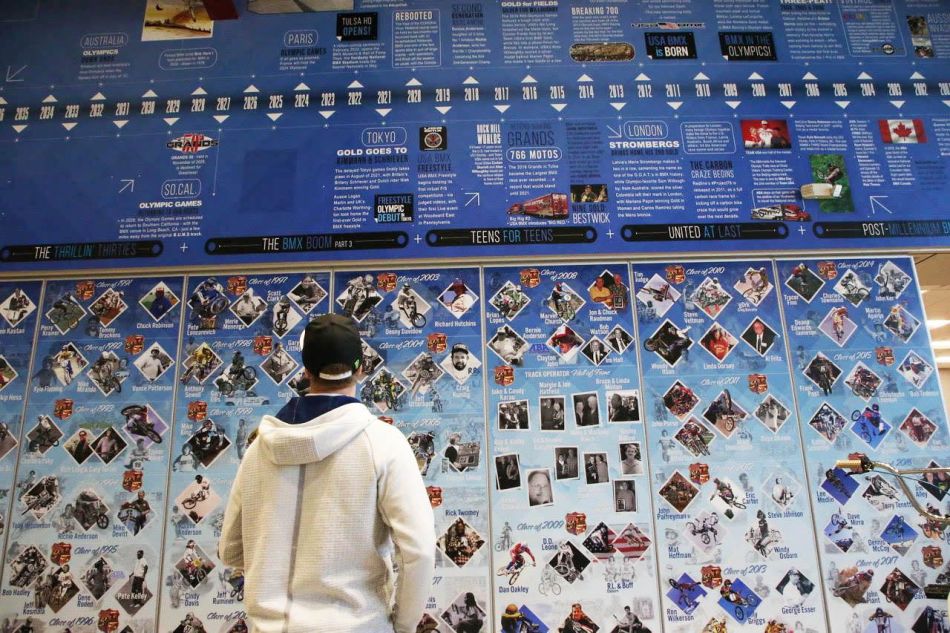 USA BMX Hosts Opening of National Headquarters with the 2021 U.S. Olympic Team for BMX Racing. The long-awaited headquarters located in the historic Greenwood District includes the BMX Hall of Fame, Hardesty National BMX Stadium and the USA BMX Foundation. Officials from USA BMX, the Greenwood Community, the City of Tulsa and the State of Oklahoma hosted the grand opening of the USA BMX Headquarters earlier last week during the Olympic Games. The Olympians, who represented Team USA at the most recent Tokyo Games, also participated by treating attendees to a race demonstration on the Olympic-caliber track.

“Today’s celebration has been a journey more than seven years in the making,” said Shane Fernandez,