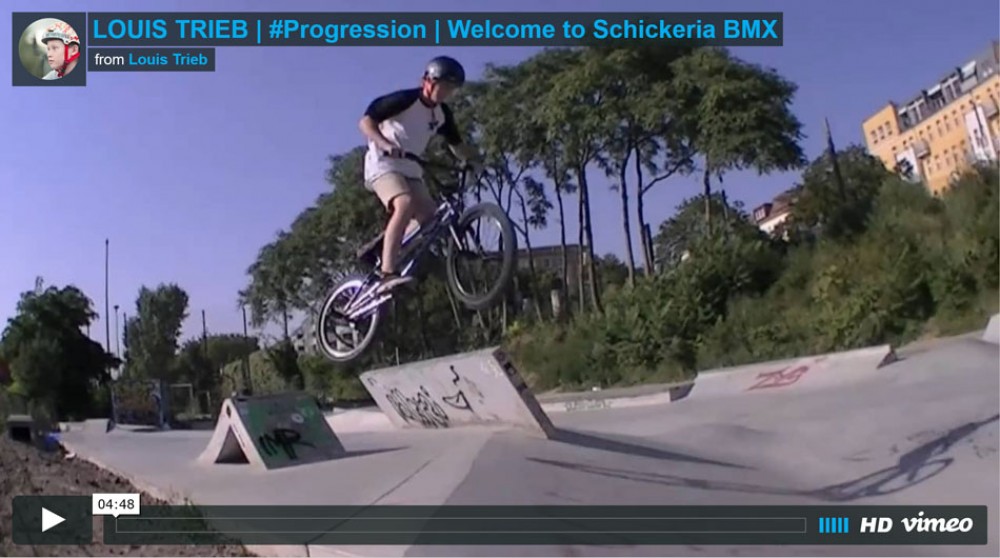 It´s been a year since my last edit “Been There – Done That” dropped. Back then I took part with the edit at the “Bagers Freestyle Film Festival 2015” hosted by the Freedom BMX Magazine.

You can watch that edit right here:
freedombmx.de/bangers-video-contest-2015/louis-trieb.html

This new edit is called “Progression” and is my “welcome to the team” edit for Schickeria BMX Shop and Mailorder.

I got massive support from Schickeria BMX since day one we met and I’m so proud been asked to join the team now!
Also I´m stoked about the fact being the youngest teamrider in the hisrory of Schickeria BMX!
At this point a big thank you goes out to Schickeria BMX – schickeria-bmx.de – for for the friendship and the awesome support!!!

Comparing my old edit “Been There – Done That” with the new one possible exlplains the title “Progression”...

The clips for this new edit were filmed during the last 12 months.
Most of the time I was 12 years old, some clips were filmed right after my 13th birthday.

We were out filming all over South-Germany, Austria and Switzerland.
Also there are some clips filmed during our summer vacation in Berlin.

More in this category: « Nowear bmx Kody Rowe from NOWEAR FATBMX KIDS: Lennox Zimmermann - Show your tricks on BMX »
back to top