A visit to Pyskopath bikes. By Lloyd Ramsay

Written by  Bart de Jong
Read 11398 times
The other day Omar who rides for Pyskopath Industries/Bikes invited me over to their ramps in San Undisclosed , California. Psykopath started out as a rider owned racing team and later added on a freestyle team as well as products. Their "training facility" and office is based out of a house with a large ramp in the backyard. The entrance to the office is the best part since everyone walks up the ramp and climbs through the window. Inside there are bike parts everywhere and if there were any strangled hookers, they hid them well. Zack Held the team manager showed me the prototype of their 5150 frame. It has been revised to include a Spanish BB, internal headset and they shaved a bit of weight off as well. 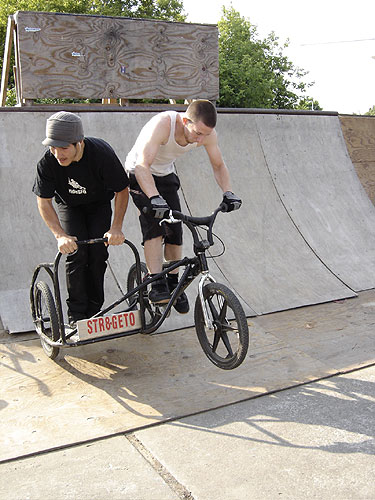 With homemade ramps you always have to find the one rusty nail sticking out first and any section that inadvertantly moves under you. Lucking I hit neither but did appreciate Skatelite after a few pedals. The ramp takes up all of the backyard and was a lot of fun. Each time you air out you have to keep an eye out for the dog who lives there. She would walk onto the ramp as you hit coping making sure you stayed frosty upon your return from the air. 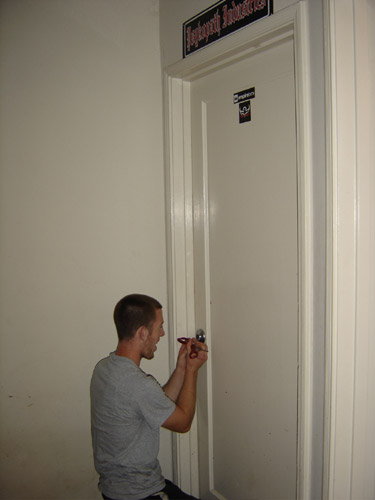 The Psyko's then took me out of the backyard and showed me their trails which run alongside some train tracks. We could not ride them much since they needed quite a bit of reconstruction. The fences that run alongside the trials are all tagged up new age murals. The dog struck again and had dug a hole in the side of one of the rollers. The property itself is not inhabited by anyone and serves as the base for the Pyskos business. No expense was spared in the security system which requires you to jimmy the lock of the office door with a pair of scissors. 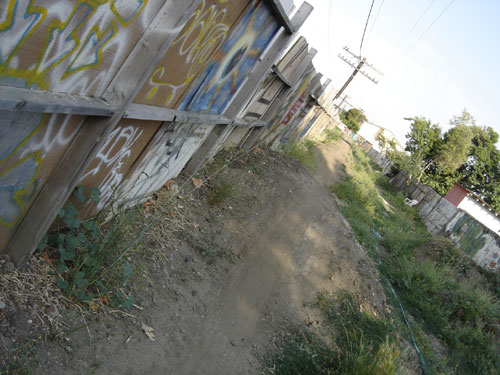 Here's an example of what the Psykopath crew is about:

Psykopath Road Trip Concludes as MR T Podiums in A Pro Alan Hudson goes down … Yep that’s right after 44 days on the road Psykopath team rider Nick Valencia and his crew of pro’s and ams are now back in the bay area.

The trip covered all races from UCI NBL and ABA events from Evansville, IN all the way through ABA Vegas this past weekend. Trip riders included Donald Goodwin (A Pro), Alan Hudson (A Pro), Chris Gaal (17-18x), and TM Nick Valencia (22x).

The trip started well and ended on a great note for one of the most accomplished riders in BMX, Terry T aka MR. T started off the trip with a good weekend in Evansville In, snagging a double with a win in masters and 30&0ver open wheels.

To finish out the trip Terry showed up in Vegas to show that the days of Flat pedals and good results are definitely not over. Nor Cal pull was in full effect as Mr T proceeded to win his semi main with classic style in the turns that will bring back memories of the 80’s. Terry carried that semi momentum into the first main with a good start and a 2nd place finish. Consistency paid off and landed him 3rd on the podium. Not bad when you factor in that T is a solid 37 years of age and against the likes of riders less than half his age. Sergio, Alan, a bunch of guys are in their teens and will likely be glad to have had the opportunity to have ridden against a legend.

Terry’s next race will be Utah ABA and he’s staying tuned up for NBL Grands where he will be in the points chase for a #1 plate. Special thanks goes out to all the families and riders that helped us out on the road trip in different states. We slept on a lot of floors and ate a lot of meals and without those riders/families stepping up the trip would have been a lot harder.

Jeremy and the trail guys in Illinois, The family from The Hill BMX, NOR CAL’S Finest Paul Holland for the support in Vegas, and anybody who I may have forgotten. We as a team thank you for helping to make the trip possible.

Not to end on a bummer note but in the 2nd main in Vegas Alan “Hotpants” Hudson took a tough fall that couldn’t be avoided and unfortunately sustained a little bit of damage to one of his kidneys. He is doing a lot better already and should be home by the time you read this. If you’d like to contact Alan and wish him a speedy recovery feel free to do so via This email address is being protected from spambots. You need JavaScript enabled to view it. and well get it over to him.

More in this category: « Davenport moves from TipPlus to Greasy Comb Distribution Seattle Bike Supply Teams Up With AXO. Bubba signed for 3 years. »
back to top