Ratty Fest at 4 Seasons. By Catfish. Pics by John Ward

Written by  Bart de Jong
Read 15274 times
Only from the mind of Kevin Porter would a concept of the Ratty Bike Fest come. The second annual Ratty Bike Fest went down in Milwaukee, Wisconsin this past weekend at 4 Seasons Skatepark. Kevin got the idea during a typical contest run a few years back where he was competing against 4 of his friends. None of them cared about winning..they just wanted to have fun. Kevin realized that this was the key ingredient in having a successful BMX contest. Kevin felt that competition took away the fun. So he devised a 4 man team format in which teams competed against each other. The key being that you have a 4 man team and you all work together to shred. Last year Ratty drew huge crowds and some amazing riders and for the 2nd year things got even bigger. Riders from Florida, Canada, Colorado, California, Ohio, NY, Georgia, and even Washington state, all converged for a smashing good time all in the name of BMX.

We (me and Joey "BirdFlu" Hill left DK on Friday and headed up to Milwaukee. I knew there was a lot of chaos going on up there so we drove really fast and made the 8 hour trip in about 5 1/2 hours. 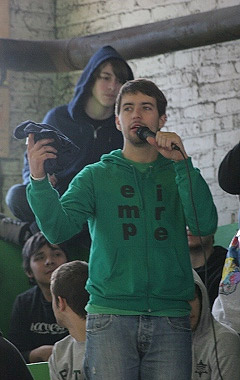 As soon as we walked into the park I was greeted with the color green. Kevin had gone bonkers and painted everything he could green (it was St. Pattys day after all). In addition to the green there were also sponsor banners hanging all over the place.... Kevin really put some work in.
I journeyed upstairs and saw an amazing art gallery courtesy of Dig magazine and Dave Leeps' hard work. This was turning out to be an epic event. There were lots of familiar faces Zack Warden (Failure bikes) and Andy Chapman (Tree bikes) were training each other in the rhythm section which turned out to be the thing to do all weekend. Insane trains went down with as many as 20 riders+ involved. The FBM contingent was in the house with Tony Cardona and Tony Hamlin doing what they do best....go big.

Cran Cran aka The black Barry White aka Pancake breath aka Steve Crandall went bigtime on us and was covering the whole shindig for Fuel TV. He's handsome. He told me to write that. Other notable faces were last years winners Chris Gerber (SE), Anthony Napolitan (Hoffman), Brett Banonsaweicz aka Maddog (DK) and Steve Cuesta (DK). The Marks brothers Joey (Vans) and Jacob made the drive over from Indiana with two new faces; CJ and Jordan Stark - remember these two names. CJ is 13 and Jordan is 9. They are amazing. CJ throws flipwhips while Jordan does 540s and turndown flips. Yeah..BMX is getting nuts. The Wisconsin crew was in the house and made their presence known -Brian Kachinsky (DK), Dom Travato, Jeff Klugiewicz, Brandon Hoerres (Mutiny) and some Baco boys (Dave Freimuth and Chad Degroot) showed up to cheer on the cheeseheads. 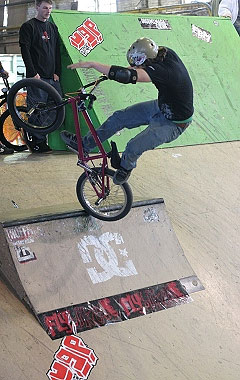 Friday night saw the packed skatepark empty and the St. Pattys day festivities begin. Green was the color and the nigh and the nightlife in Milwaukee never disappoints. Green beer was consumed, breasts were shown, and things were broken. I made out with a hot girl and went to sleep.

Saturday was pro. 4 man teams working together to win this thing. Some of the teams had rehearsed runs, some just went for it. Standout teams were FBM. Shawn Arata, Tony Cardona, Tony Hamlin, and Jon Wells. Everything you would expect from these boys. Hamiln was tossing flairs and going big on the boxes, Cardona is soooo fluid. He's just got the flow. Arata did a wild wallride transfer into the big quarter and Jon Wells did the biggest abubca I have ever seen. 8 feet tall and 5 feet back out of a 6 foot mini. It took him a couple tries but he nailed it. 2nd place to the FBM boys. Team Midwest of Jeff Klugiewicz, Dom Travato, Eric Holley (Eastern) and Tony Neyer (Flybikes). This was a group a lot of people were waiting to see.

Dombomb icepicked the slanted wedgewall to OVER BARSPIN. Jeff K fired out an ginormous icepick in addition to all his regular tech insanity, Eric Holley, Eric Holley Eric Holley. If you forgot his name...now you remember it. His chain broke so he did a feeble to rollback up a wedge to tailwhip out. He trucked into the box lip, rail rode the round rail to 180 out, 180 barspin to fakie up a wedge to 180 out. Man...that kid is bonkers. T-bone Neyer has been all over the place lately. For good reason...he's been riding for Fly for what seems like eternity and when you see him ride you realize why. Big boost airs out of the wedge wall, whips and downside whips out of it. I don't know what place they took but it had to be in the top 4. Some other standout riders were Kevin Kiraly (Redline), he was flairing both ways.

Throwing dialed whips all over the place, at one point I watched him whip the first box, double whip the second, and then flipwhip the third. His bike was also a pretty purple- you need to know that. Ben Hittle (The Take) pulled a 180 whip over the box. Dustin Greiss rules. He is the man from the Aspire video that rocks his babyface on the mailbox. He rode stellar. Huge flairs and big moves made me smile. The winning team was taking no prisoners. Gerber, Cuesta, Napolitan, and Banosanweicz. Whips, flips, flipwhips, flairwhips, and an 11 year old coming super close to a 360 flip made up their run. If that wasn't enough..Napolitan fired out a huge fronty followed up with a tuck no handed fronty, followed by an indown front flip. Yeah...they won.

There were so many amazing sponsors that kids were getting free shit every 5 minutes. KP collected some bike parts from Sergio Layos, Joe Rich, Jimmy Levan, and Cory Martinez. Some lucky chap won a complete bike made with all those parts. There were also three big trash cans filled with prizes from EMPIRE BMX, Orchid, and T-1. Each trash-can was filled with a lot of goodies and a jam session went down at different sections of the park- with the best trick winning the trash-can. 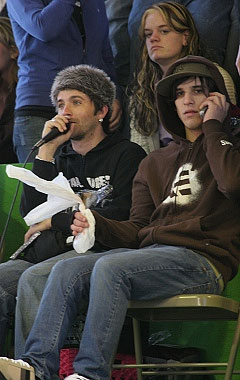 Tony Cardona (FBM) won the Empire trash-can with a wild transfer over the hitching post into the box jump, he opened the trash-can and was stoked on his new nano and a naked picture of Empire's Bonnie. Tony Neyer (FLYBIKES) took the next trash-can with a 180 gap to backwards double pegger down the rail. New digital camera check. The last trash-can went to Mark Potozney (Hoffman) with an insane 360 tailtap to icepick out of the mini and into the bowl. Wild wild wild. Overall it was an amazing good time. The cold weather didn't stop the fun. Lots of insane riding went down, new friends were made, old friends were hugged, good times were had. The Ratty Bike fest is a contest but there wasn't one bit of competition in the air. Everyone was there to have a good time and thats exactly what happened. Props to Kevin Porter for making it a reality and a HUGE THANKS TO ALL THE SPONSORS, EMPIRE BMX, ORCHID, FLYBIKES, ETNIES, UGP, PROFILE, DK, ODYSSEY, T-1, and 4 Seasons Skatepark. 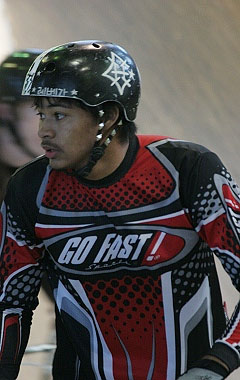 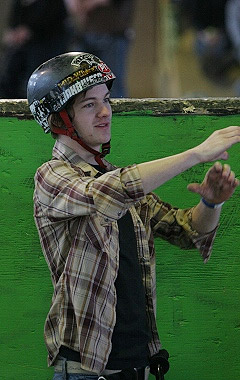 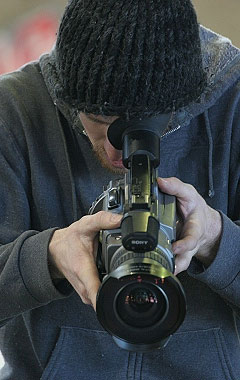 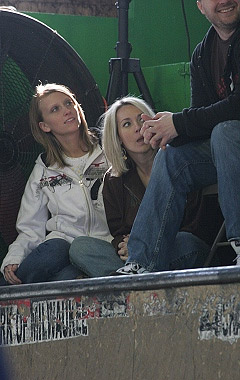 More in this category: « BMX Freestyle contest news from Brasil. By paulo Charaba Motorola BMX Jump Battle of Lima - Peru. By Jonathan Ospina »
back to top