Written by  Bart de Jong
Read 24658 times
Going all the way back to the BS Series, 2006 is our 15th year anniversary for organizing BMX events. We really wanted to make CFB special this year. We try to do something different every year and to do a event that’s different from any other BMX event out there. Our basic format is it to get the best course builders, provide the best purse at a BMX only event, offer great prizes, and provide the best medical crew at any action sports event. Combine all that with the best BMX contest staff in the business and you have a CFB. We want every rider to leave CFB saying “that was F*%^ awesome!” Our 15-year anniversary CFB was exactly that. 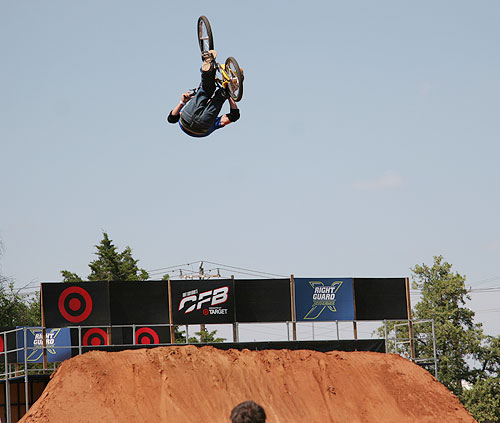 Shawn Walters and Magilla came in to build the dirt course. The start ramp was similar to last year, only the step-down gap was bigger. Nate Wessel built the wooden section of the start ramp, following that were 3 huge sets with the biggest landings this side of Stephen Murray’s place. Riders loved the Oklahoma red clay, Gill and Elf had the jumps perfect. We run the dirt comp in a jam format; 15 min. plus last run. Riders can get as many turns on the course as time allows. Judges give each rider one score for the session. This really allows the riders to relax and try some stuff they normaly wouldn’t in a big contest. I’ll let the photos and results tell the story but it was a crazy comp. Here’s a few observations on the dirt comp:

Guettler rode practice but hurt his wrist and couldn’t ride the comp. Nyquist had only been back on his bike for one day before the traveling to CFB, he was nursing an injured hand, Ryan did as only Ryan can do, Nyquist at 80% is still mind blowing. Nasty is back! Doyle did a 720! He put it down clean on the middle set to a 3-whip on the last set. Front flips are now a standard trick. Cameron White ruled the day with his first pro win.

We did a vert demo this year instead of a full on vert comp. We purchased a brand new vert ramp from G Ramps this winter, and the ramp was ready for its 1st real session. 11.5’ tranny with 2’ of vert, at 13.5’ tall, 40’ wide, this thing is huge. It was our first time to set it up on our own, thanks to our BMX ramp crew for being patient with Page and myself. It took us 3 days set it up and get it perfect, next time we’re aiming for 12 hours. The ramp is awesome! 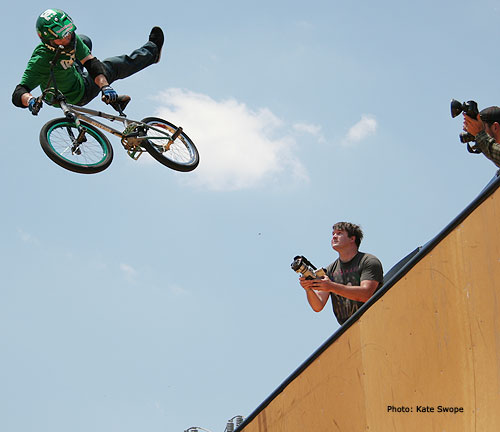 Mat, Robinson and Kagy were on the deck to put on a vert dog show. Mat wasn’t able to ride in his hometown last year due to a staph infection from his last knee surgery. He was anxious to give the OKC crowd a good show. Nothing can be said about the living BMX legend that hasn’t already been said, I will say if Mat is riding an event, get there. He hasn’t slowed down despite having 20 surgeries. Kevin and Chad each took one warm up run their first time to touch the new ramp. The second time each dropped in, both proceeded to throw down X Games runs. Living at Woodward pays off,…big time. The OKC crowd couldn’t get enough.

Saturday night was the CFB Art Show. Last year we asked several BMX’ers and skaters or anyone who’s influenced by BMX to submit art in whatever medium they used. Drawings, paintings, photos, whatever. April Mays headed up the Art Show this year and last, along with Brian Tunney, coordinating the submittions and inviting well know BMX artists. Unfortunately, I was too busy hanging out to shoot any photos but it was great. The latest issue of Props also premiered. Fun night which ended too early for most. Get your submissions ready for next year. 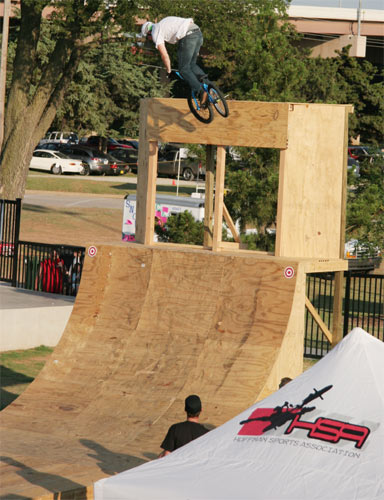 Nate Wessel has been doing CFB courses for years, this year the BMX ramp genius brought along Ryan Corrigan to lend his unique design and building skills. Adding wooden ramps to a concrete park is a pretty funky idea, but I ask you the question….when has the HSA ever done anything normal and we don’t plan on changing. Last year worked great, all the riders loved it. Nate had complete freedom to do whatever he wanted, within the budget anyway. He and Ryan had five days to build and install. They used every min. and as you can see by the photos, Wessel and Corrigan went crazy. Thanks guys, the course ruled! 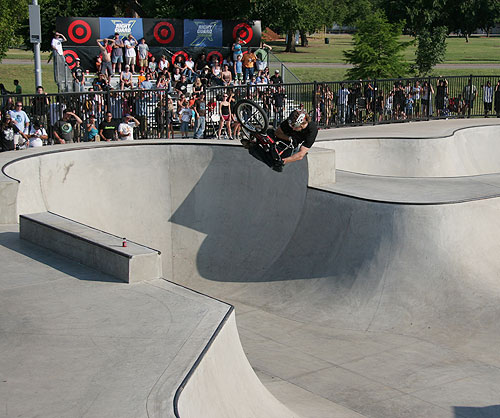 The brief re-cap is, Diogo Canina is the real deal, Brian Hunt, who qualified 1st, is also the real deal. These guys are already well known but you will for sure hear much more about them this year. MacKay is looking good on his new ride, Chase Hawk is the new Brian Foster, Brian Foster is still THE Brian Foster and he still sets the standard of good style. Guettler toughed it out with his injured wrist and proved the young super pro will take a bad day with a smile on his face to go along with the many smiles from his 2005 super season.

Michael Cleveland has stepped it up over the winter and reminds me somewhat of Osato. Cleveland is dialed, has loads of bike control (like Osato) and has a huge bag of tricks; downside double peg grinds on lock. Prior to CFB Dave Dillewaard had already proven to many he’s not only a dirt rider. However, at CFB, he made it clear he’s as big of a force to be reckoned with in park/street. Dilly was all over the park with tech moves to go along with his amazing airs and combo tricks. Every run was complete and with very few mistakes. It was close between Cleveland and Dillewaard, in the end Dilly took it and the Aussie’s were quite happy. 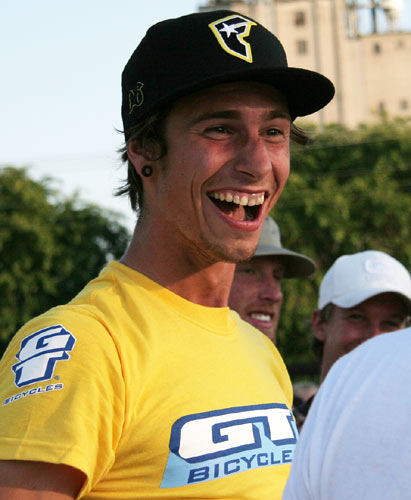 We were off the wrap party, thanks to Mike Cleveland I lost the sleeves of my favorite Paul’s Boutuique shirt. Watch your back Mike….Thanks to Little League Hero for playing and to VZD's for hosting the party. If you're ever in OKC, you have to make a stop at the legendary VZD's. A Hoffman crew local spot for the past 18 years.

CFB will air on FUEL in the next month or so and Props is producing the show so you know it will be great.

Special thanks to our sponsors, Target and Right Guard, thanks to everyone that makes CFB happen and thanks to the riders for coming to CFB and making all the hard work worth while.

See everyone next year! 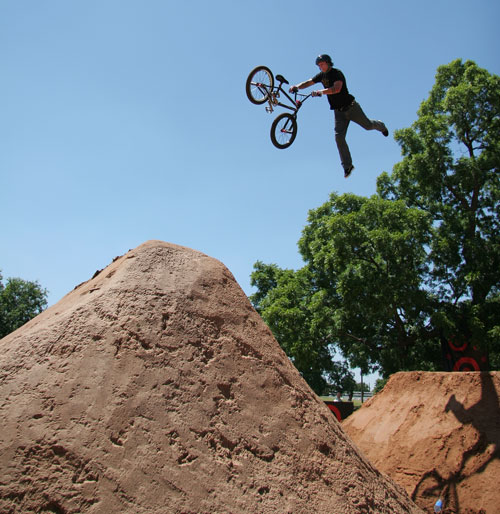 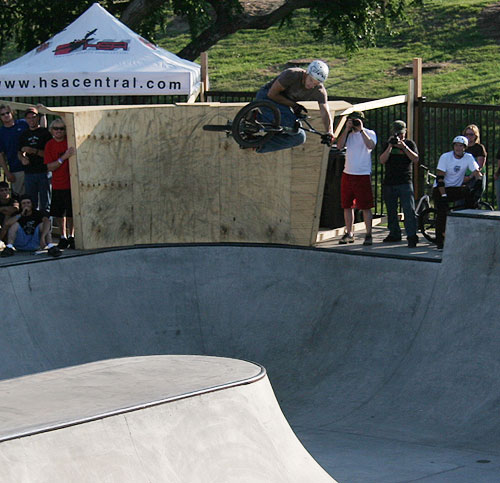 Best Trick: Gary Young-540 truckdrive to fakie on the step up
Best Line: Brian Foster-Giant boost from the spine into the volcano hip
WTF (What the F&^#): Cameron Wood- high speed 360 from the deck into the deep bowl, STREET!
Tuff as Nails: Ryan Guettler- aking all day long but getting up and finshing his runs