Written by  Bart de Jong
Read 11072 times
Jackson, NJ Native Scotty Cranmer Takes Early Lead in Points Standings. June 23, 2006 – Louisville, Ky. – Scotty Cranmer of Jackson, NJ won the BMX Park competition on Friday at the Panasonic Open at the Kentucky Expo Center in Louisville, Ky., the first stop of the 2006 Dew Action Sports Tour. It was the second consecutive tour win for Cranmer, who won the PlayStation® Pro in Orlando last October. He takes an early lead in the season points standings, earning 100 points for the win. Cranmer, 19, scored a 94.50 on his second run and sealed the victory with a double tailwhip 360 to edge Ryan Guettler, the 2005 Dew Action Sports Tour BMX Park champion. Guettler of Beenleigh, AUS., who led after the first run, finished second with a score of 93.75, earning 75 points. BMX up-and-comer Daniel Dhers, Caracas, VEN placed third with a score of 92.00.
“I went into this Dew Tour season with a goal of trying to stay consistent,” Cranmer said. “Somebody told me to do my tricks with a bing-bang-boom. Start with a bing, then a bang and end with a boom. I rode my bike everyday during the off season; that doesn't sound exciting but it makes a difference in the end.” 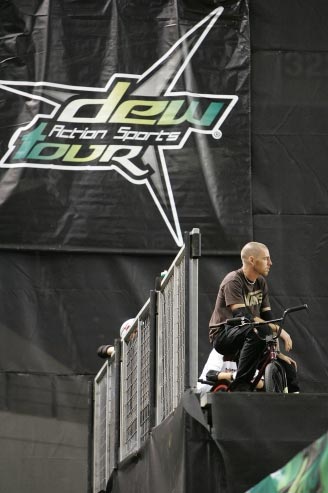