Written by  Bart de Jong
Read 13198 times
The Red Bull Elevation comp was a huge success. The jumps were awesome, the riders were top level, the organization was perfect, the sound was great and partying was on. We're splitting up the report by listing the 11-20 placed riders first and then the 1-10 placed riders later. Enjoy.

20 Adam Baker. You could take the finals two ways: 1) Take it safe and miss out on the top ten (meaning no money), or 2) Step it up and go for it. Adam was one of those riders who stepped it up, or at least tried to. The three-whip over the first set, that went straight into an oververt 180 degree right berm, caused some problems where Adam lost the speed he needed to clear the following set. Not happy with this he tried it again. With three out of four runs counting, missing more than one good run wasn't ideal. It was Adam's birthday too but that didn't help change things. After another sneak attempt back up on the starting hill he pulled what he wanted (the truckdriver) and continued with a personal victory run down the hill throwing one-handers and stretched one-footers for the hell of it. 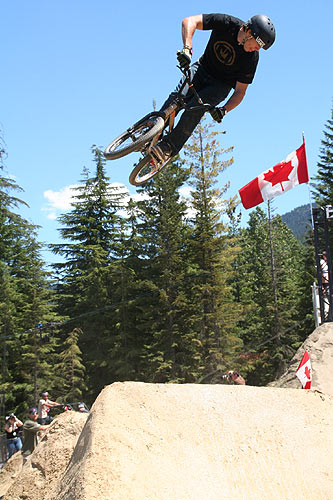 19. Gary Young. You can take the boy out of the Dirt Bros but you can't take the Dirt Bros out of the boy. That was one of the many comments that Paul "Grotbags" Roberts yelled over the microphone at the Elevation comp. Grotbags rules and was well on form in Whistler. Gary's form in the finals was not 100% but making the finals was an accomplishment itself. The San Diego local got stuck at 19th place but we did get to see some Vic Murphy-influenced tables from our little brother. 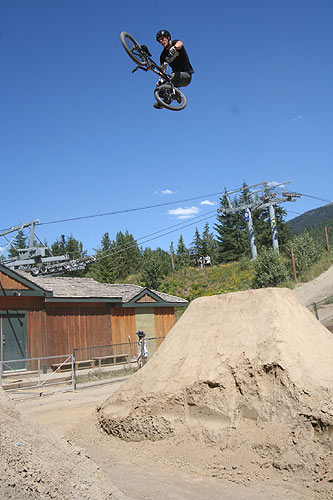 18. Dane Searls. Holy smokes, another one of those Aussies and one to stay. Dane was the first rider I saw hit the trails which was super impressive. He continued to go big over the enourmous sets on the course and the superman he did on the big set was the biggest one I've ever seen. In the finals he rolled the dice and had a few crashes but he did pull the best trick of the finals by pulling a double tailwhip over a huge set. Dane was enjoying the $ 1000,= USD as much as his cable lift ride down the mountain after the party on Saturday night. Too bad he forgot that the doors of the cabin opened at mid-station and some girls were watching there........Aussie Aussie Ausiie, Oi Oi Oi! 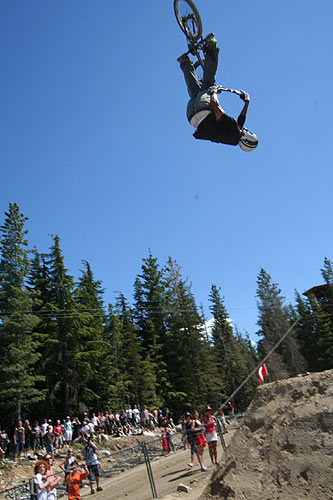 17. TJ Ellis. I have to admit that I never heard of TJ Ellis before. I had to figure out who he is but it didn't take long. The kid's got balls and skills and plays with moves like no-handed front flips, turndown flips and flip-doublewhips. The Perv bike that I noticed earlier was his and not Nasty's. Nasty did not make it but TJ represented Perv very well. 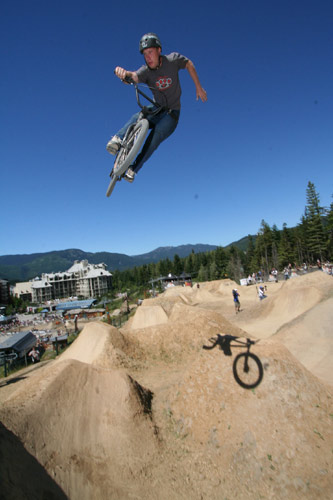 16. Paul Kintner. Paul is pretty much used to riding trails this big and needed little time getting used to the Elevation jumps. With chrome slambars in the original width, Paul rode posessed and was representing the HDT in full effect every night. He did not seem to have problems with the wide bars either as he threw down turndowns and x-ups plus three-sixties all over the place. His sideways one-handers and moto-whips over the jumps showed that he's got not only style but skills. I was glad that Paul made the finals but a crash on the last jump knocked him silly and he had to skip his final run or he might have placed higher than 16th. 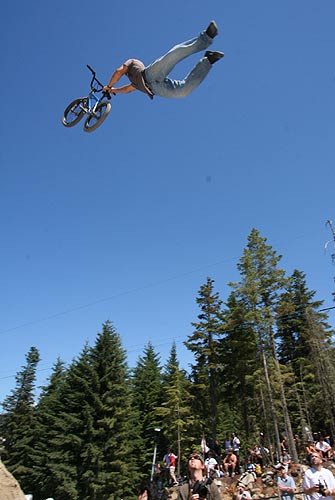 15. Kym Grosser. Another one of those Aussies. He rides brakeless but put a brake back on the bike because the course was so gnarly. Only Dropsy had the balls to run it brakeless which doesn't take anything away from Kym. His main trick over the last set was the tailwhip to seatgrab indian air that Guettler crashed on hard at the Dew Tour the previous week. Kym pulled it on his MacNeil bike. Balls out. 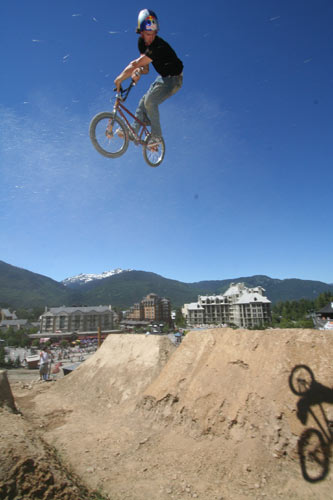 14. Kye Forte. Kye was in the first group in qualifying on Friday. He wanted to pull some solid runs in to qualify for Saturday's final. The 2005 World Champ did that but almost missed the cut by finishing 19th. Yup, the level was this high and the riders were this hungry. Kye added some 360 variations, flips and tailwhips to his runs on Saturday which again were very consitent but to make it to the top 10 in Whistler you needed some bangers. 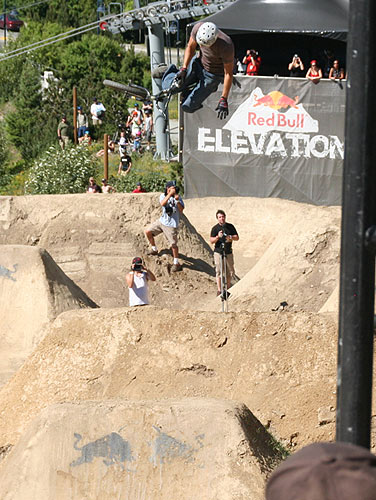 13. Brian Foster. BF was having fun all weekend long. He rode from beginning till the end just because the set up was so good. BF had the transfers down and his one-handed three-sixty tables are a treat. For the finals he had an other transfer in mind that would be sick. To make it to the landing of the last big set on the top was impossible. Brian wanted to land on the side of this landing which was damn steep. His first attempt was a little short and his attempt in the last run didn't work either. Brian just rolled on and enjoyed the rest of the course like nothing happened, with a big smile on his face of course. 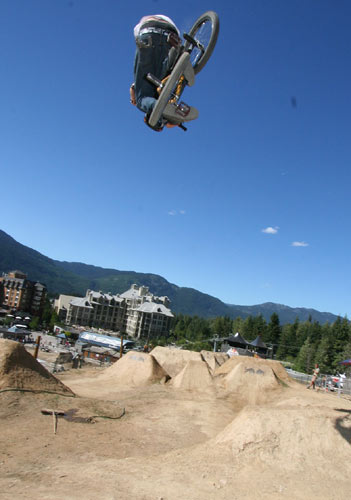 12. Dave Dillewaard. Okay, I'm a table top fan. I like to see inverted tables just as much as the craziest tailwhip-360-backflip-barspin combination and Dillewaard delivered over the hip. But it didn't end there. Dilly had plenty more including a tailwhip and other tricks on the step down going into the last set. Dave wanted to ride this contest so bad and he had fun doing it even though he missed out on the top ten bucks. 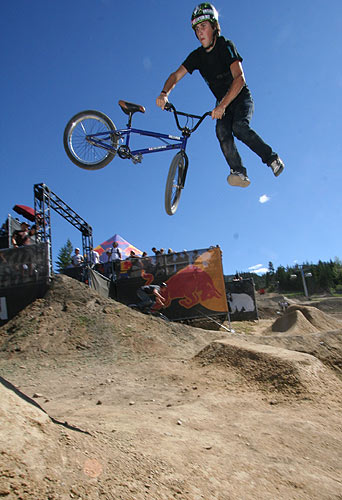 11. James Foster. In 2005 James pulled out a triple tailwhip but he left it in the bag in 2006. Still he's got double whips wired and threw them out whenever he felt like it. Fifth place in 2005 and 11th in 2006 for the Eastern Bikes rider who got interviewed for the TV program/DVD that will be produced out of the Red Bull Elevation contest.