Written by  Bart de Jong
Read 20781 times
Damn, here's the last part of the Elevation comp. It was insane. We've saved the best for last. Here are your top 10 finishers:

10. Romuald "BB" Noirot. Top 10 got money. A big scoreboard first showed the schedule, then it showed the top twenty qualifiers and then it showed two groups of riders; The "In the money" group and the "Not in the money" group. BB was the first rider to enter the Money group on the left side of the score board. He did so by throwing true superman airs over the big sets, no-handed 360-s, whips, a couple of lookbacks, 3-whips, and three-in-one combo's that made you want to rewind the film to figure out what he just did. BB is riding his signature MacNeil these days and wanted to show contest organizer and MacNeil boss Jay Miron his current level. The judges (Osato, Biz, Korthaus, Barrett, Beringer) were impressed too. 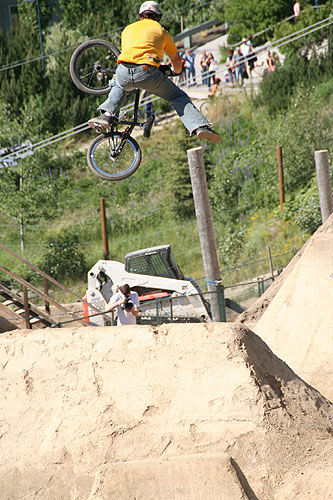 9. Darren Barrecloth. It was Canada day on Saturday and Darren Barrecloth was the only Canadian to make the cut. Darren is a Whislter local who comes from BMX and then moved n to riding MTB's. Whistler is the MTB freeride capital of the world and hundreds of MTB-ers were taking lifts up all day long. For a weekend Darren dusted off his Specialized BMX to compete with the BMX dirt elite and finished on a respectable 9th place. "His shirt might be yellow but his riding ain't mellow" was another one of Grotbags' comments. 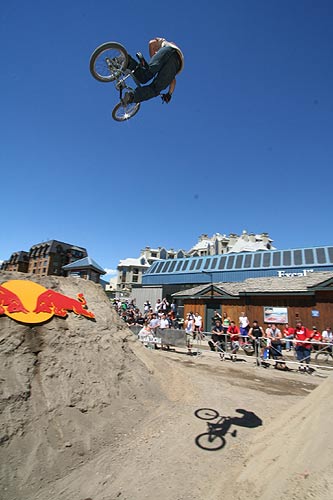 8. TJ Lavin. His experience pulls him through every time but TJ also has the moves to back it up. His lazy no-footed cancan, superman seat grabs and Indian airs where he throws his bike sideways sure have a TJ flavour. Even when jumping the sets straight, TJ still throws in some style whether it's a moto whip or a tuck at the very end. Lavin has skills and with a resi in his backyard he ain't done yet. TJ was also one to transfer between the big sets on top which is also good in a trails style contest. Flips with x-ups and 3-whips over big sets ain't too shabby either. Eigth place. 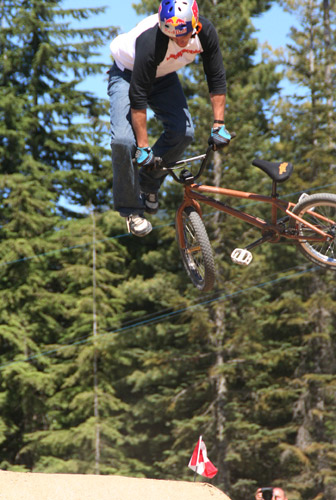 7. Alejandro Caro Ospina. When wethepeople rider Alejandro Caro showed up in Whistler he wished he had gone to the Urban Games instead. The jumps were so big and in this field of dirt riders he thought there was no place for him. But Alejandro made it work and advanced to the final. Once there he stepped it up by doing a decade jump on the top (second jump) and continued with a 270 over the hip, flat 360-s, flip variations and more. He also did two 720-s mid-run and could not believe that things were working out for him this well. When the results were announced starting by place 20, his named did not come up until place 7. The Colombian was well stoked and will be back at the next Elevation. 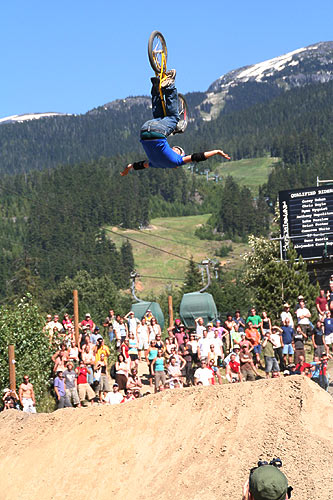 6. Anthony Napolitan. Fresh from the Denver Dew Tour Dirt win Anthony continued to impress. No-handed front flips over the last set and the big set on top require some balls. The speed you get when you land on these downsides is incredible, let's not talk about the tumbles you make if the jump does not work out. It's no use listing trick by trick, you better watch the official Elevation video for that but Anthony also unveiled a table topped front flip on the last set and received a warm welcome by the Canadian crowd. 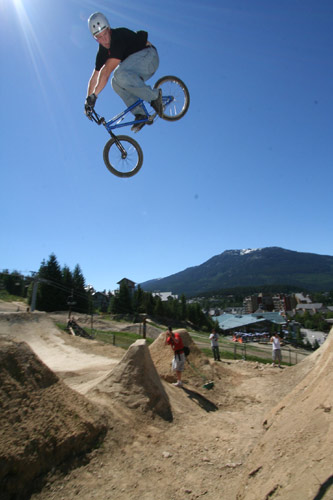 5. Cameron White. The Australian Mongoose rider has been riding the US contests for the last three years. Although he has only won one contest he is always in the mix up front. It's the tricks that gets him there. Riding with TJ Lavin in Vegas helps him get better and better and on the mountain side in Whistler Cam did 360-s with the nose down, double whipped and whipped to barspin with ease. Expect an interview with Cameron on FATBMX in a few days so you can check out some more of his tricks he pulled at the comp. 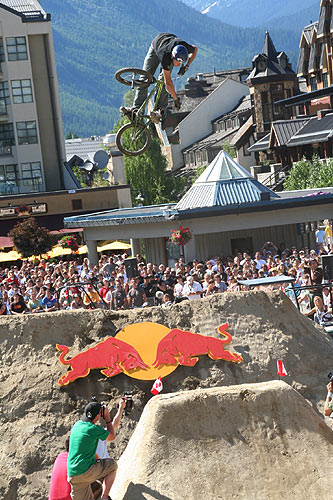 4. Chris Doyle. The best 360 turndowns in the business. Period. Chris was also a transfer lover and did 360 transfers at that. His consistancy usually makes his tricks look easy but on the Magilla jumps they looked hella good. He placed fourth but that might as well have been first. It was getting close at the top. If you want to enjoy Chris Doyle ride, go to this years' BMX Masters in Cologne. He'll be there once again. 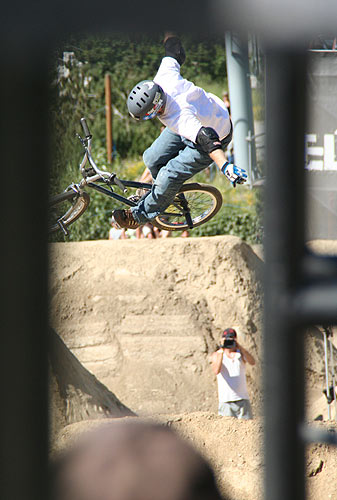 3. Ryan Nyquist. Ryan was unfortunate enough to crash in practice. It gave him a sore back. With the Red Bull, the Oxigen can, the massage corner and a bit of Jack Daniels liquid painkillers, he got on the bike and marked off his extensive list of tricks. Did we really see five 360-s in a row with variations on the top? Super impressive as there was no room for error. On the last set Ryan did one close flip where he did a suicide but his bars turned 180 degrees. He rolled out of it with his bars backwards but you read that right, he rolled out of it. Last year's winner got third in 2006. 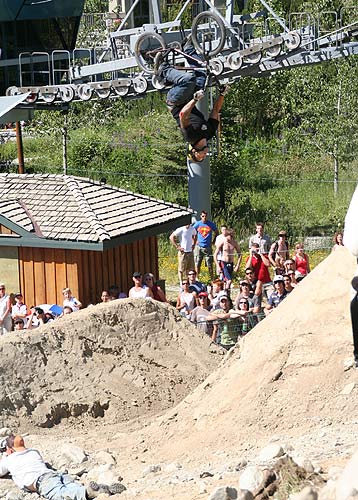 2. Luke Parslow. Two Australians were left to be announced; Parslow and Bohan. Both of them killed it and it won't be long before Parslow grabs a big win. It's going to happen this summer. He made up for Nasty's absence and styled around busting the big shit like flipwhips and shit yo. There was no jump that did not get tricked and when Luke does it there is height and stretching involved, every single time. He got the show going in Whistler and the big crowd at the bottom got behind him. X-up flips, flip whips and backflipping the step down to front flipping the next set, everyone flipped out. Luke combines the nightlife with his riding and it works out for him. It's twice the fun too. Congrats. 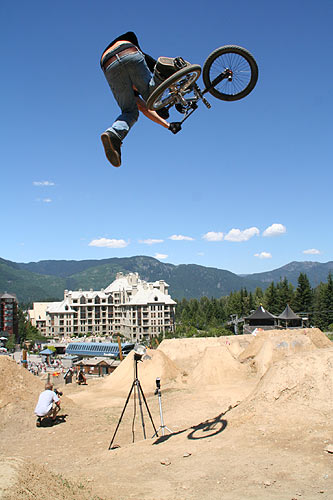 1. Corey Bohan. Of course a Red Bull rider had to win this one. The judges were bribed and it will all look good on TV this way. When you spend so much energy (and money) on this unique event you might as well get the most out of it. A rider with a Red Bull hat on the top of the podium only makes sense. We're only kidding of course. Corey Bohan rips. He does opposite 360-s better than most do regular. He switches pedals too, that's hard to notice. He's got the one-footed x-up flips and the whips and tricks to make every run stunning and that's what he did. With 3 runs out of 4 counting he had the best cards in his hands and won the 2006 Red Bull Elevation, the most prestiguous dirt jump contest of the year. I believe he received $10G for his efforts and yes the after party on top of the mountain with Nashville Pussy playing live was great.

Props to everyone for making this work.