wethepeople on tour in England. By Rob Harrison 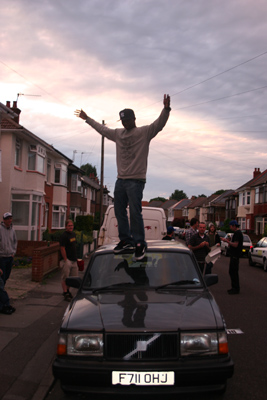 I was suprised that no one had tried it before, but after visiting two places no one had really been to before it also made sense to go back to an old friend but do something we also hadn't. Fact is I hate rental vehicles; unless you get yourself a closed back 7.5 tonne shutter van they're not really the reminder of getting your friends together and going off somewhere I like. So buying something always appealed. There you get two options, buy something decent and hang on to it afterwards, or buy something of a heap and just do whatever with it.

I didn't really know what would be the end option as we started looking, fact is we'd been looking last year as well but decided against it. It's the kind of thing that you get sucked into, with an open scope for any vehicle and Chris from Hotwheels also got sucked into digging up some weird stuff. Somehow part of the tour ended up just being looking for the right cars. We looked at everything from Mercs to Capri's - which would have made at least one team member real happy. I looked at old library buses, Ice cream vans and battered old camper vans from the 60's.

In the end we saw that big old cars, now crippling on insurance and repairs were going really cheap. I loved old Volvos from the 80's and after seeing the Swedish guys touring European contests a few years back, I'd seen how much beer you could pack into one. So the search began, ebay being at first the last option but ended up being the market place for all three of the cars. As the final bids went in, also during the football.....we'd bought three cars for 550 quid. All three for less than half the cost of the rental van. Obviously we were looking at three times the petrol and insurance...but no one gave a shit about that.....well not until later.

One car broke down on the way back to Hotwheels. That put the budget out another 16 quid, but things were looking good and everyone was pretty stoked about the turnout. Will had one of the Swedish tanks at his house, and a friend sprayed up the legal wall with some fresh paint. Sometime around that Chris was sorting out a sketchy flame job on one of the other big ones, car number three would eventually get butchered at a mid-night bbq with the 5710 Bournemouth guys 'helping'.

This we ended up completely re-doing the next morning and a friend of James Smith re-worked the entire car two days later in London, an action that both concerned the hotel staff, the police and without doubt the hotel residents who spent the next night looking down at a Volvo with a huge cock on the roof.

We spent a couple of relaxing days in London, during which Luc took the skin off his palms, Cleggy got mugged of his bike and Will his rucksack by a big gangster dude with a bloody big kitchen knife in Battersea. Hadrien's camera gear got abused by some crazy house resident who'd had enough of people riding the communal garden, big Max ripped it back from her. Good job they told the other group not to go to the spot.....ah no they forgot that. But we avoided the stress. Max described Meanwhile 1 to me as 'like a couple of quarters under a bridge' ....so it was no bloody wonder that we couldn't find him.

James took us down Southbank, which was 'just down there' but seemed to take a lot longer to get there. I guess the pikies who found us down there had taken a shorter route cause they seemed to have the energy for a fight. They thought better of it and moved on, so did we. John Dye took us down the river, and invited us to 'the' spot and Steve showed us all how to ride it. Incredible, more I can't say and faster is the only advice Steve had.

London was a nightmare, plain and simple. Here's the deal...the city is rad and has more spots than dodgy folk but the minute you set foot in a car you can forget it. Sure you could take the train but make sure you have both pockets full of change for that one.

Heading north, we skipped the planned spot in the middle and went to somewhere I can't believe has not been visited more often. Birmingham. Everyone slept, I slept with one eye open thinking of the parking meter. We were hitting roughly one spot a day and our intense program was set to continue here. Ok it just seemed like it, we rode around and Luc and I headed off to find what Birmingham town council saw fit to label as BMX on the town map. Disused bmx track pretty much summed it up, I guess it was the thought that counts. Idiots.

Couple of days there, then up to John Hall's in Stockport. We'd session Manchester and the surrounding for the next few days. Ended up being just one session in the centre then out to Preston, Liverpool in the rain, Blackpool also in the rain...and my fish and chips sucked. Still meeting with Nash from the wtp forum was good. We even saw the north south divide!! It was sunny down south, and raining as soon as we hit Liverpool..... was it just the weather is there a hidden message? 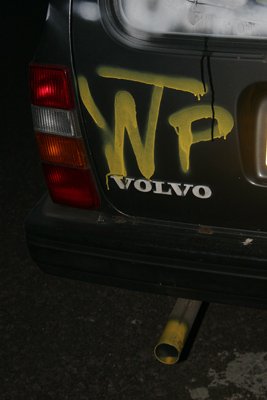 The last days pretty much getting back to London only to find out it was Wimbledon weekend, thanks to Chris at Hotwheels we avoided sleeping rougher than we'd already been doing and stayed in Wembley....which meant an all you can eat chinese buffet and for some riding 'till 5am. The French guys, Luc and Hadrien then took the early Eurostar back to Paris.... I think that's the only time 'normal' people can afford that damn thing.....good job all OUR taxes paid for it, otherwise where would be eh?!! Maybe after I've paid for the Wembley stadium re-build they'll let me keep enough of my tax to be able to afford to visit both.

Nigel and Stephen got shown aboard HMS ferry crossing on the drive back to Cologne.... a far cry from the shouts of 'you have got to be joking' when I first explained that four of them, plus bikes, plus Stephen Lilly's bag would be traveling back to Cologne in VW polo; now that is what I call a road trip.

To all those interested, the three cars will be again appearing in the near future.....one is a prize for the winner of a comp in RideUK next issue. The remaining two are available for sale in the coming weeks on ebay. For less than the price of a frame you'll get yourself the actual tour vehicle....a badass bit of Swedish design and some wethepeople thinking. The proceeds of which will be donated by Hotwheels to a skatepark, so if your local park needs funding and let's face it, whose doesn't.....drop us the suggestion.

That's it. stay fresh. Next time will again be something else original, just like everything wethepeople.

More in this category: « Results Urban Games, London, England. Straight from the FISE »
back to top