Written by  Bart de Jong
Read 4354 times
Once again, 2 time Flatground winner Martti Kuoppa (28) was on top of his game during the sixth edition of the international flatland BMX event Flatground in the NDSM shipyard in Amsterdam. In a nerve wrecking final, the Finnish rider managed to outclass Frenchman Alex Jumelin. This weekend, more than 1000 spectators visitors witnessed Kuoppa take home the victory. The qualifying rounds on Saturday decided which twelve flatland BMX riders placed for the finals on Sunday. 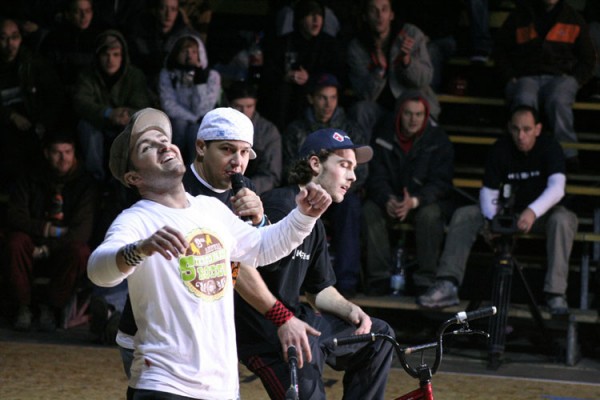 With riders from Japan, the United States, Spain, Germany, England, France, the Netherlands and Finland, the field of competitors in the finals was packed with heavyweights.

For the first time, the finalists competed in a new contest format. In a ‘head to head battle’ format the riders take on each other directly, choosing their direct opponent, starting with qualifier number twelve. This exciting format kicks the loser of the battle directly out of competition, until there are only two riders left, who will have to battle for the Flatground title. All this made for a dynamic final with surprising results.

Best example is the youngest finalist, sixteen-year-old Matthias Dandois. Being the highest qualifier, he showed self-confidence and guts by challenging the American Justin Miller, one of the true heavyweights. The audience gave him a lot of credit for his bold choice, but his youthful overconfidence turned out to be fatal for him. Eventually, the other Frenchman, Alex Jumelin, managed to kick out Miller in one of the best battles witnessed all weekend. Kuoppa’s road to the last two was a bumpy one as well. When the Englishman Sam Foakes, one of the revelations of the weekend, started to throw down his innovate tricks, it looked like he would defeat Martti. But, as a true master of this new contest format, Kuoppa fought himself back into the battle to proceed on to the final two. Encouraged by the enthusiastic audience, the solid hip hop beats and the sharp comments of host Scott O’Brien, Kuoppa had to give it his all once again to defeat Jumelin.

The Frenchman was aware of his underdog position, shown by the disbelief he showed when Kuoppa would perform a perfect and seemingly impossible run. Obviously, he didn’t give up and pushed himself to a new level of riding. In the end, Kuoppa kept his cool and didn’t let the energetic Frenchman get on his nerves. The decision of the five judges was unanimous. Judge Effraim Catlow: ‘Martti Kuoppa was unstoppable today. I’ve seen him do things I’ve never seen anyone do before. He was on another level!’

With a smile from ear to ear, Kuoppa had an honest explanation ready for his glorious victory: ‘I am amongst friends here, which gives me so much energy. The riders, the organisation, the audience, they all gave me the drive and the energy to take home the victory!’