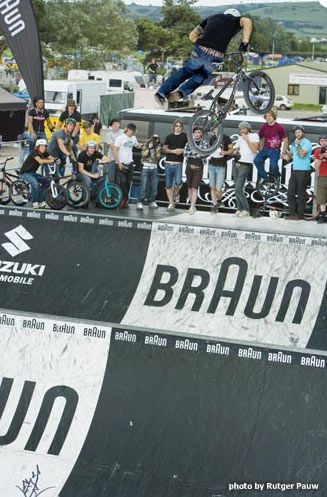 Nass was back in Shepton Mallet for 2007, with names like Mark Webb, Ben Wallace, Daniel Dhers and Ben Hennon the somerset crowd were in for a treat. It was the second stop for the Braun spine cruzer tour and even though it was quite windy the riders didn't hold out. There were a crew of Mexican bmxers who made the long trip to Nass and all had some good tricks and good style to follow.

Chris Mahoney placed in 5th and had a good solid run filled with tricks and finished his run trying to backflip the 7ft spine. Ben Hennon Placed in 4th and went so high over the spine I think you could of stood underneath him with your arms straight up and he still would of cleared you. Daniel Dhers who rode with his usual smoothness and consistancy.; 360 double whips, 540 tailwhip airs and invert flairs got him 3rd place. Ben Wallace placed in 2nd and rode the whole ramp from tech spine tricks like whip to over ice to back over to double whips and flairs and smooth rode with his usual smooth style. 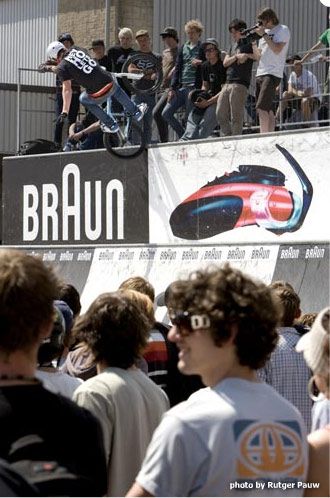 Mark Webb found himself in first place again and made his chances even better of winning the overall cruzer tour. Mark was pulling everything first go, Flair to 540 tyre taps tailwhip manuals 3whips. The BMX Masters will see the final stop of the tour next week and if this weekend was anything to go on its going to go off.

The street at Nass was the final event of the weekend. The UK had a bunch of riders representing in the final from Paul Jeffrries, Phil Aller, Craig Stevens, Louis Smith and Cam Hardy was flowing with usual style and threw in flairs and pulled a good 360 wallride transfer. Luke Marchant had all of the lines which no one else even rode and did a huge downside whip transfer, Tony Watkinson had loads of lines with nibbles and a barspin to whip on the step up. 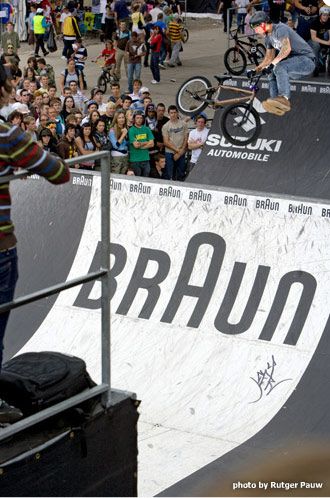 Chris Mahoney placed in 5th and in 4th was Ben Hennon who went higher than anyone all weekend on the braun ramp and also on street. He was close to hitting the roof on a 360 invert over the short box and fell hard doing a 360 tailwhip to tailwhip but got up and pulled a straigh tailwhip to tailwhip. Daniel Dhers got third and was going off with big tricks such as no footed can to whip, big flairs,360 double whips, and a front flip over the spine, He also had a move on the box which is like a 720 but it's so much more pulled back that it looks like 360 backflip. Mark Webb rode amazing and pulled 360 double whips, wallride flairs and tech on the spine to hang ten lines.

The win was taken by Ben Wallace who had a mix of what everyone did. He went high, had style, lines and big tricks. big flairs, a triple tailwhip, clicked 360 lookbacks and a 360 double downside whip that he made look so easy. The trouble at Nass this year didn't affect the riding but I'm not sure if we will see it again next year.

More in this category: « Riders On The Storm - Relentless No Half Measures BMX Tour Red Bull Elevation recap + 3 movies!!! »
back to top