“In The Beginning” True Story by Todd Bank. BMX Freestyle in the making 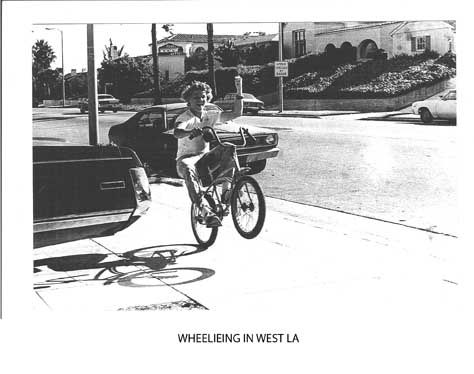 In nineteen-seventy when I was five years old my father would drive my brother Devin and myself on Friday nights to begin competing on a new kind of race course at a neighborhood city park. Ron Mackler was putting on the twenty inch BMX bicycle races at Palms Park on Overland Avenue in West Los Angeles. The course was a combination dirt and cement race track that had six burm turns that were built around tall Douglas Fir trees and a small jump at the bottom of a hill. At the start of the race you had to be the racer in front first into the turn if you wanted to win. 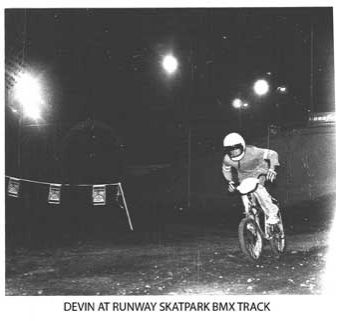 And many times if you were going into that burm too fast or with two people fighting for that spot the inside person would hit their head on the vertical trunk of the tree and it would hurt, a lot! The finish line was the other place you could win the race by sprinting by the slower less physically fit racers up to the same cement pathway as the start line. 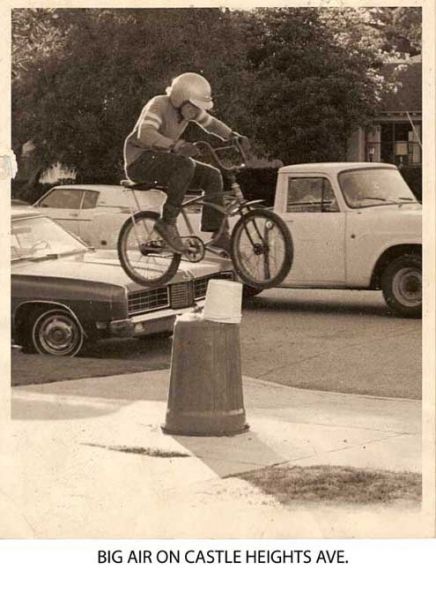 For many years my brother and I would hang out at Palms Park after school and build up the downhill dirt jump so we could get bigger air on our new Schwinn Scrambler BMX bikes. Jumping them was the new thing that we both loved to do. But every week before the Friday night races Ron would always return the only jump on the race course back to a smaller jump to keep the racers on the ground. We would always go back and make it higher again the next day. 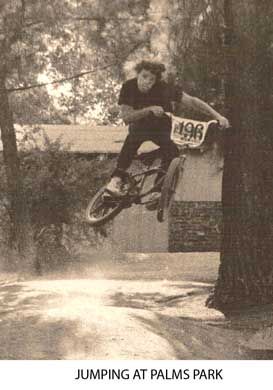 The fastest and flattest way to Palms Park from our house on Castle Heights Street was to ride our bikes through a totally dark half-mile train tunnel past “Suicide Hill” which was a 20' high dirt hill built alongside a stone wall about one mile down the railroad tracks from Palms Park. If you were daring would hike your bike to the top of Suicide Hill and fly down to the bottom avoiding the huge deep water crevasses that might cause your front tire to get caught inside and throw you over the bars. 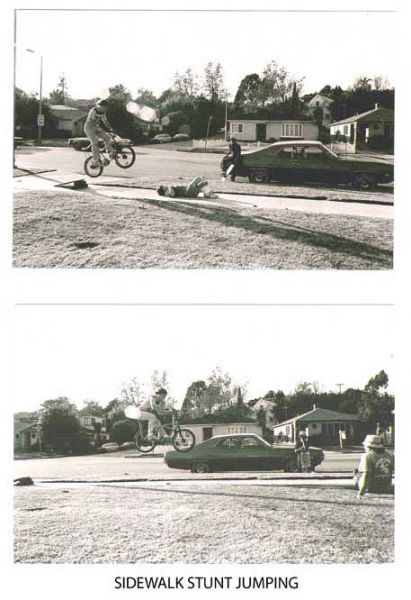 Devin and I had gotten allot of ideas of how to ride bikes from watching motocross racing on television. We began building ramp jumps in front of our house and jumping our bikes over trashcans and each other. This was not a usual thing for kids to do. Most American kids were playing football or baseball or starting to play soccer. We felt strange riding bikes for our sport but we kept ignoring what every one else was doing because it was so much fun. In nineteen seventy-one movie came out in the theatres called "On Any Sunday" and to see the dirt bicycles racing and jumping in the opening scenes of the movie made us feel like we up there on the screen that became our confirmation that what we were doing was cool and it was not only us but other kids around Southern California. 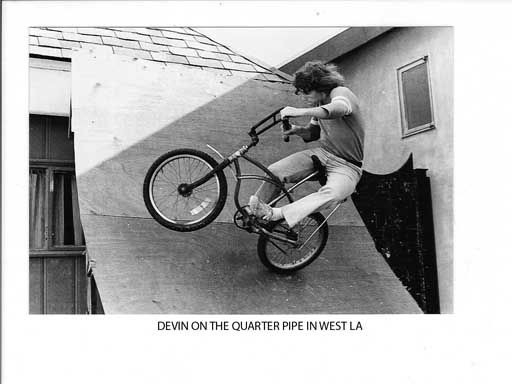 In the summer of nineteen seventy-four our family began remodeling the kitchen of our home. The old timber and two by four beams that we took out of the forty year old house were stacked up in our driveway for months. We were just beginning to skateboard in the streets and on the sidewalks. 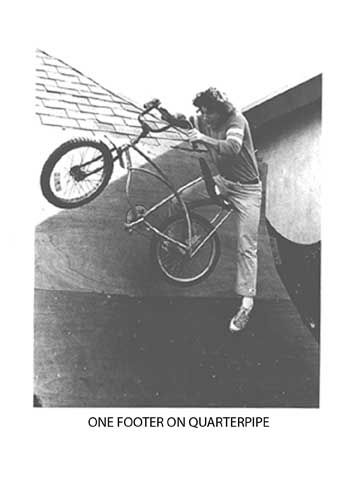 Then one day I just decided to build a skate ramp with the old wood from the kitchen at the bottom of our two hundred foot driveway. I had never seen a ramp before but because I hade already been working with hand and power tools since I was five I found it fairly easy to build. The ramp started as a four foot wide by eight foot high skate ramp but riding a four foot wide ramp is dangerous on a skateboard, not allot of turning around room at the top. So, I added another four feet across and it was now the talk of the neighborhood and west L.A. and all the skaters were in our driveway making the Kaminski’s, our neighbors crazy. We skated after school until it got dark and all day on the weekends. Soon, a time limit was put on the skating to give our parents and our neighbors some peace. 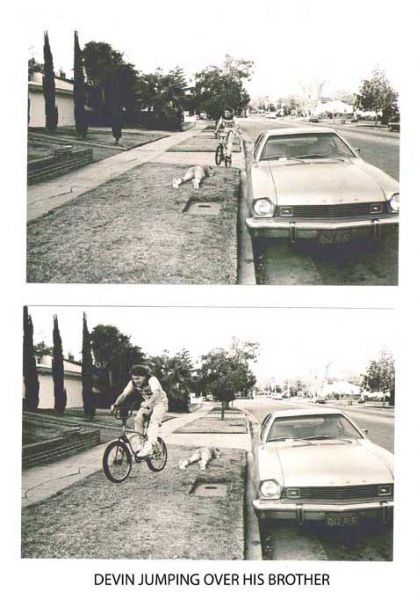 BMX! My brother Devin was the one who started all the wild acrobatic behavior on a BMX bike. For years we both had been thrashing our bikes attempting stunts around the neighborhood and the local High school turning lunch benches into six foot ramps and jumping off them. Then, one day Devin was on the ramp with his Schwinn Scrambler trying to turn around like a skater by pivoting on the rear wheel and we all said; "what the hell are you doing"? He started riding his BMX bike up the ramp and back down copying us skaters. It took him a day or two but he was now going up to the top and pivoting around and going down the ramp. He also was trying to do one footer aerials by lifting the bike off the ramp near the top with one foot planted below him as his pivot point. I thought that it was weird but I also loved to try new things and began to copy him. Within the year Devin began doing 360 degree spins off the ground. He could go off a curb jump and spin 360 degrees around on his bike. My style became crazier and stupider and liked to jump off big things but he was always more skilled at spinning his bike. 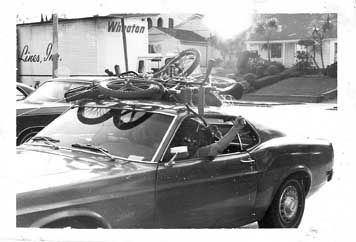 In 1976, six years after we began racing at Palms Park and one year after we had been riding bikes on our BMX and skate ramp a new skateboard park was opening in Carson California called the Runway. The first skatepark anywhere! Our father would drive my me and my brother to the Runway where we would race on the BMX track in the front of the park and then go inside the park and skate for a while. We thought to begin riding our bikes inside the skatepark on the cement snakes and inside the bowls and because of our bicycle ramp riding. Bikes became more fun and natural to us then skating in the skateparks and I loved every second. It was a whole new thing and BMX trick riding wasn’t a sport back then, you felt kind of like an outcast and that is why we did it. We wanted to blow peoples minds with the things you might be able to do on a twenty inch wheel bicycle. But one of the problems was that the bikes were not designed to be ridden in skateparks or on ramps

More in this category: « Snickers furthest 180 contest at Simpel Session. Reynolds wins once again. Watch the MOVIE! "In the beginning" Todd Bank story part II. BMX goes freestyle in the early '70-s! »
back to top