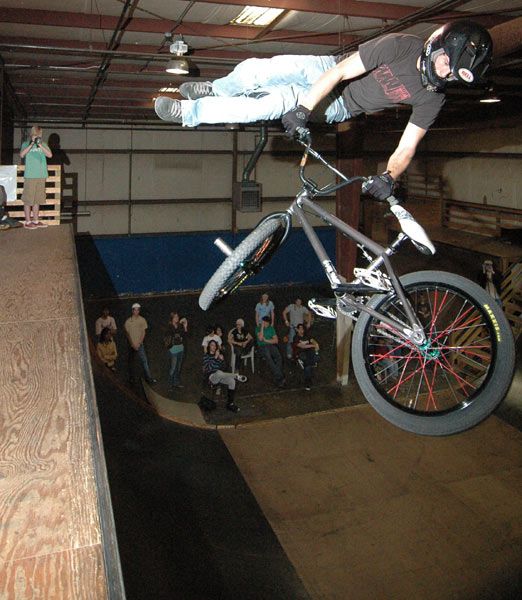 …..I don’t even know where to begin. This was the best bike contest ever at the Factory Skatepark and maybe the best contest here, period. 56 Riders came out and destroyed the place, competing in Park, Vert, Bunnyhop, and High Air on the 11 foot quarter. Talem Cowart started the day off right by bunnyhopping an astounding 46 inches, earning himself an unofficial world record by ½ an inch (for an official record, the equipment would have had to be exactly calibrated). The High Air event was a huge crowd favorite since they were allowed onto the course to watch from the base of the huge quarterpipe. Of the eight competitors, North Carolina’s Alex Johann and semi-local Kyle Kelsey were the two top dogs; Alex topped out at 9 feet but exploded upon re-entry. Kyle made it to eight and a half and rode away clean, pulling the win. 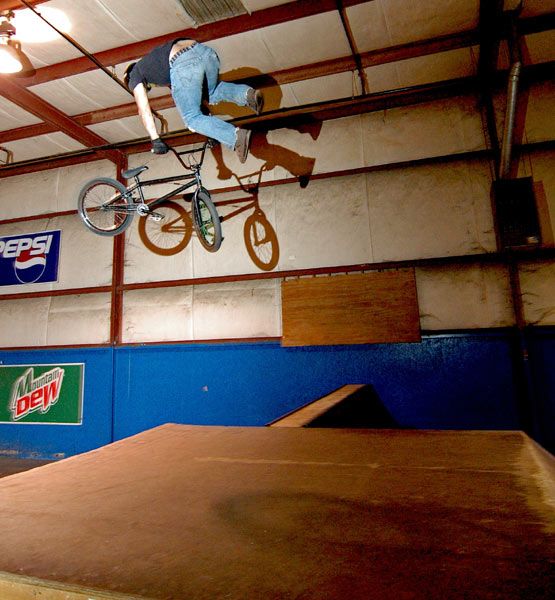 The Vert comp, typically a small event in modern BMX contests, ended up being a great success. Eleven riders donned their gnar-masks and braved infamous 13-foot U Track. The Am Class didn’t disappoint: youngsters Ian and Zane Bradley, all the way from New Hampshire, did sponsor Rye Airfield proud with tricks galore. Ryan Davis copped a rad-itude by stalling out an icepick, looking at his buddies on the deck, and waving. Jason Williams did scary high speed grind variations using different parts of his bike. I thought he had it in the bag, but according to the judges I went high enough to squeak out the win by half a point. Next year I’ll bribe them even more so it won’t be so close…Pro Vert was amazing, especially considering that none of the superstar types were representing. Kyle Kelsey turndowned, barspun, whipped, and inverted his way to third, all in a Pro-tec, having forgotten his full face. Kentucky’s Zach Newman airs higher opposite than most mortal men go their regular way. Tricks aplenty, height, and true vert style got him second. Alex Johann did an alley-oop carve across the entire ramp and carved it his regular way while pointing at the EXPN camera man as he cruised by. He pulled a superman seat grab (having never tried them before), high whips and flairs, and basically shut the place down. Numbah One. 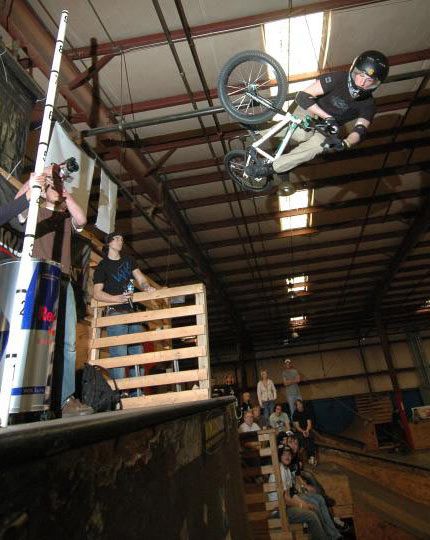 As always, the park event was ridiculous. Demarcus Paul from Albany, Georgia may look like a Brooklyn rail and ledge wrecker but can mix up huge box jump and tranny tricks with his street repertoire. This guy absolutely shredded. A well deserved win in expert. After all the breath holding, cheering, and wincing of the day, I wondered if Pro Park would be able to top everything. Well, it did.

Local Niles Harper, whose team recently won the Georgia BMX Film competition, combined high airs and street bangers like a gap to hangover toothpick for third place. North Carolina’s Darren Bouldin came through with a big gap to barspin and a 360 double whip to nail second. The winner, and a guy lucky to have survived the day, was Alex Johann again. Flipwhip? Check. Huge whip over the 11 foot quarter? Yep. 6 foot flair over it, too? Uh-huh. The guy ripped. First place - plus bragging rights for taking home both park and vert while giving Kyle Kelsey a run for his money in high air. Rumor has it that Alex is going to start intensive bunnyhop training with an old S&M H.A.F. so he can beat Talem’s record next year.

The comp was a huge success, made possible by Red Bull, Props, Primo, S&M, Lifetime Bikes, Kink, Odyssey, Animal, Maxxis, A Plus Siding/remodeling, Hooters, and the Factory Skatepark. See you there next year!

More in this category: « From the Todd Lyons Diaries: March 1996 - The Miracle Boy & Wildman Roughing It The Kids Are United in Sätzen… Results of the A - B and C-class. Pics + video! »
back to top