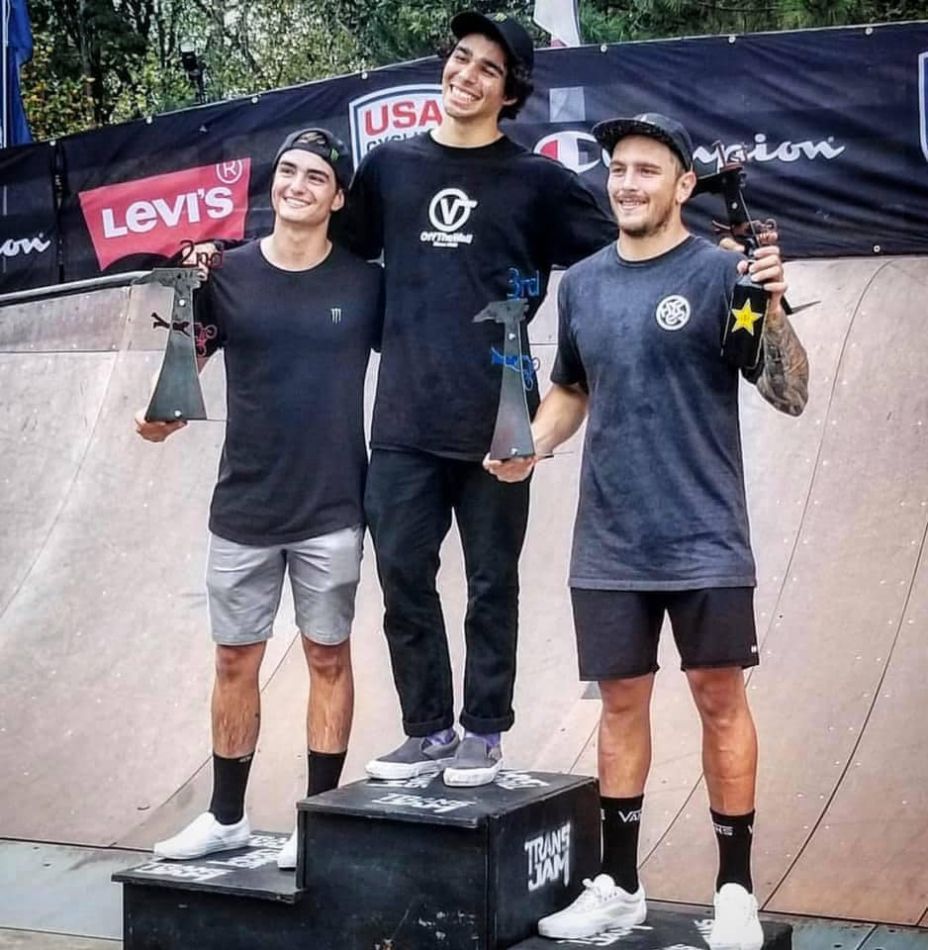 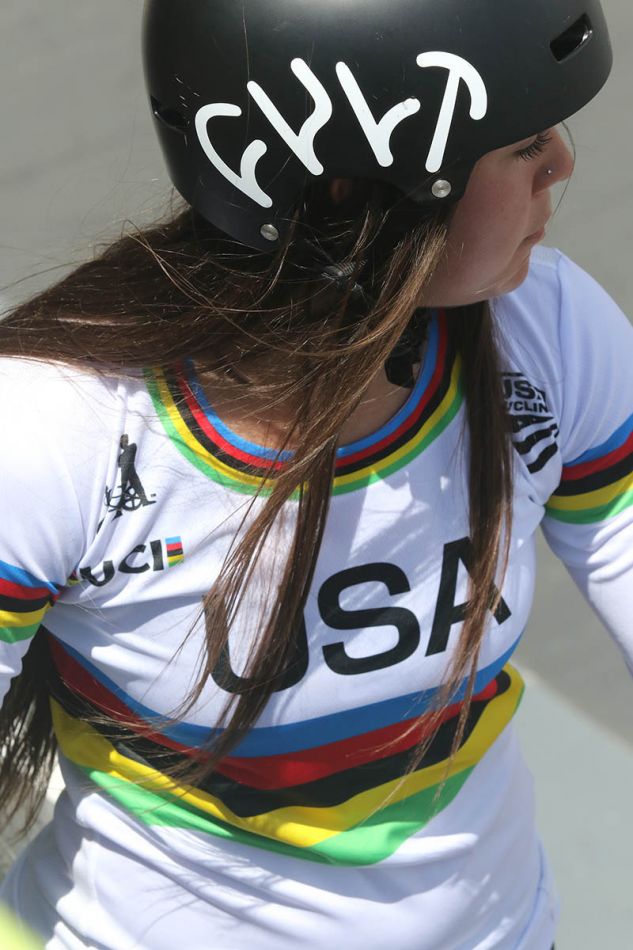 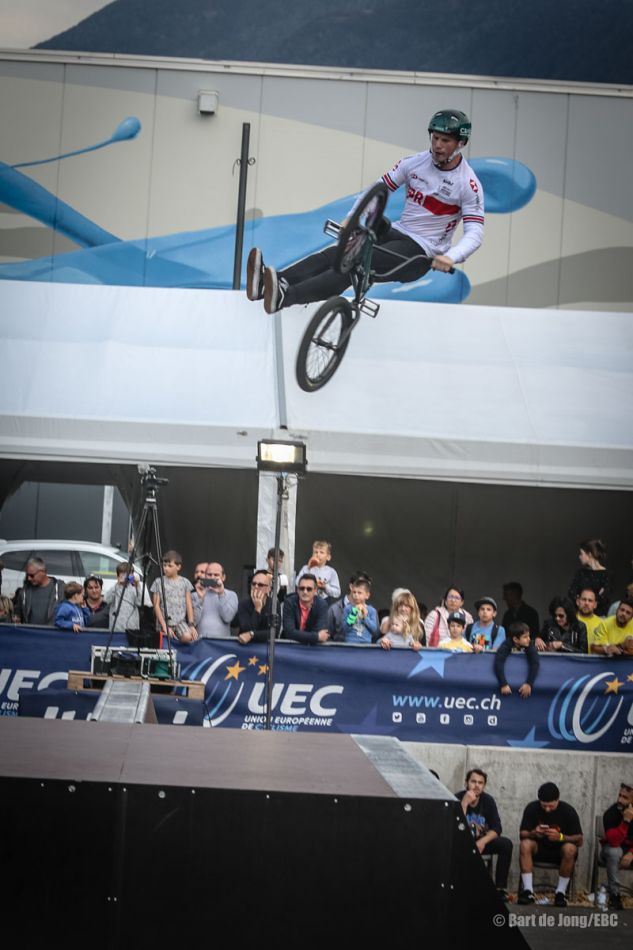 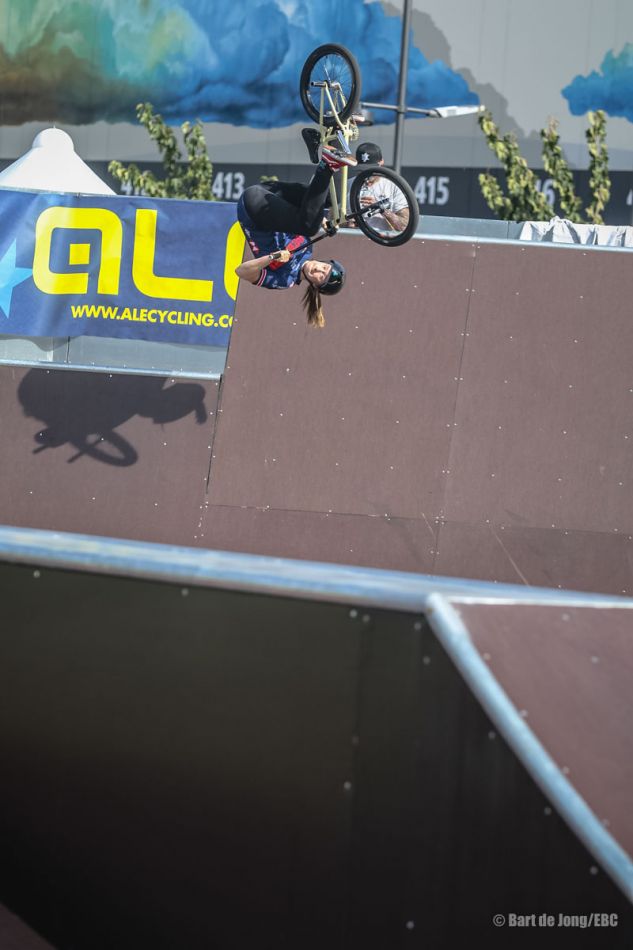 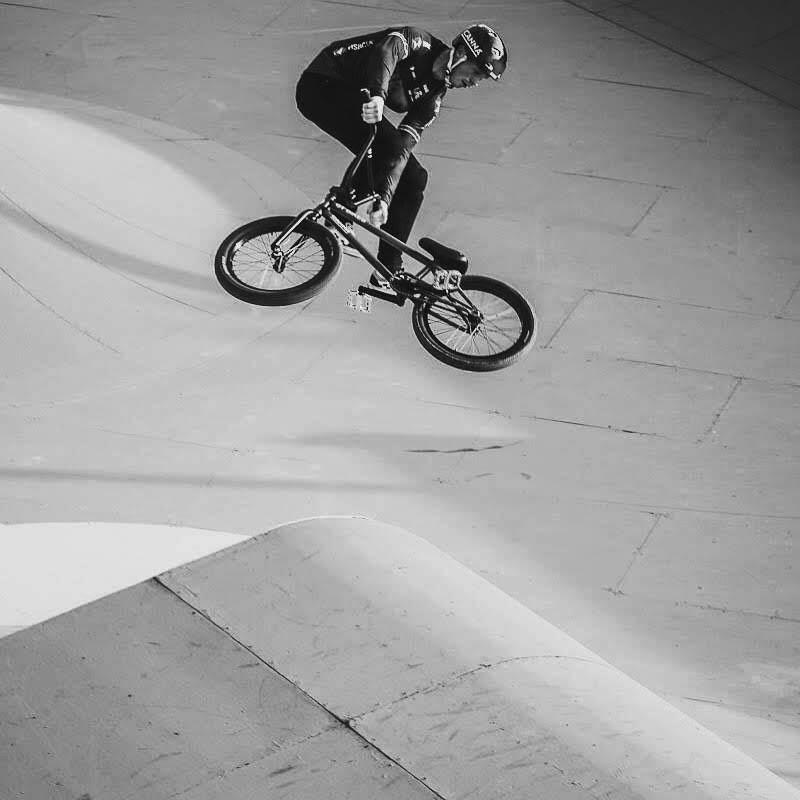 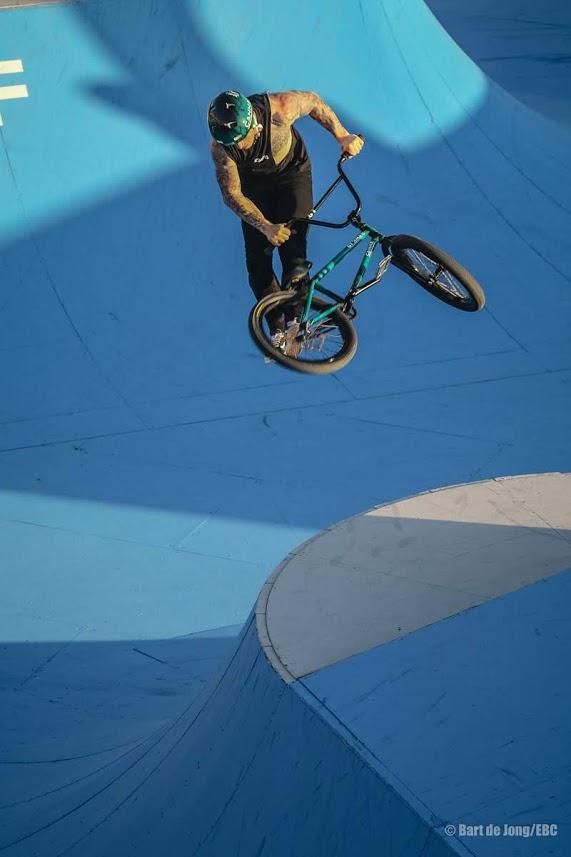 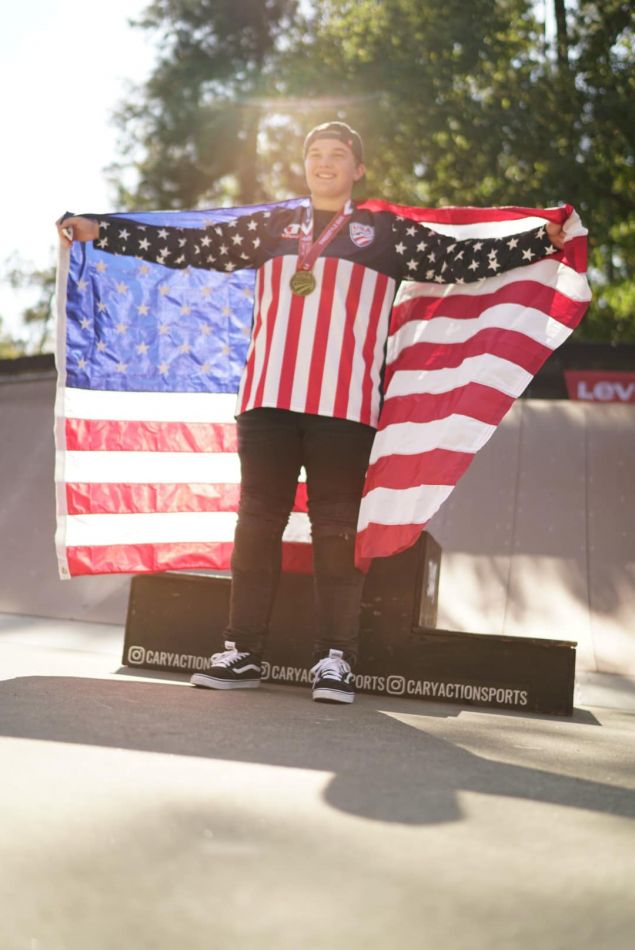 On an unseasonably hot day in Cary, N.C., the best BMX Freestyle riders in the U.S. competed for a chance to wear the Stars-and-Stripes jersey at the inaugural USA Cycling BMX Freestyle National Championships. With Sk8-Cary Action Sports Park’s 1200 square feet of ramps, riders had a large area to work with and showcase their skills. The Elite Women were the first to take the park with 2017 and 2018 World Champions, Hannah Roberts (Buchanan, Mich.) and Perris Benegas (Reno, Nev.) in attendance to vie for the National Title along with four other riders. After the qualifying runs, Benegas and Roberts advanced to the finals along with Chelsea Wolfe (Lake Park, Fla.) and Jesse Gregory (Huntington Beach, Calif.). Roberts, who came into the finals after qualifying first, had a solid run including a back flip over the spine. She handily won the National Title securing 85.75 points to second place Benegas’ 78.75. Roberts’ win makes her not only the first-ever UCI BMX Freestyle World Champion from her 2017 victory, but now also the first-ever BMX Freestyle National Champion.

Benegas just barely edged out Wolfe who claimed the bronze with a score of 78.00. Wolfe’s bronze medal finish marks the first time a transgender athlete has earned a podium position at a USA Cycling National Championship. 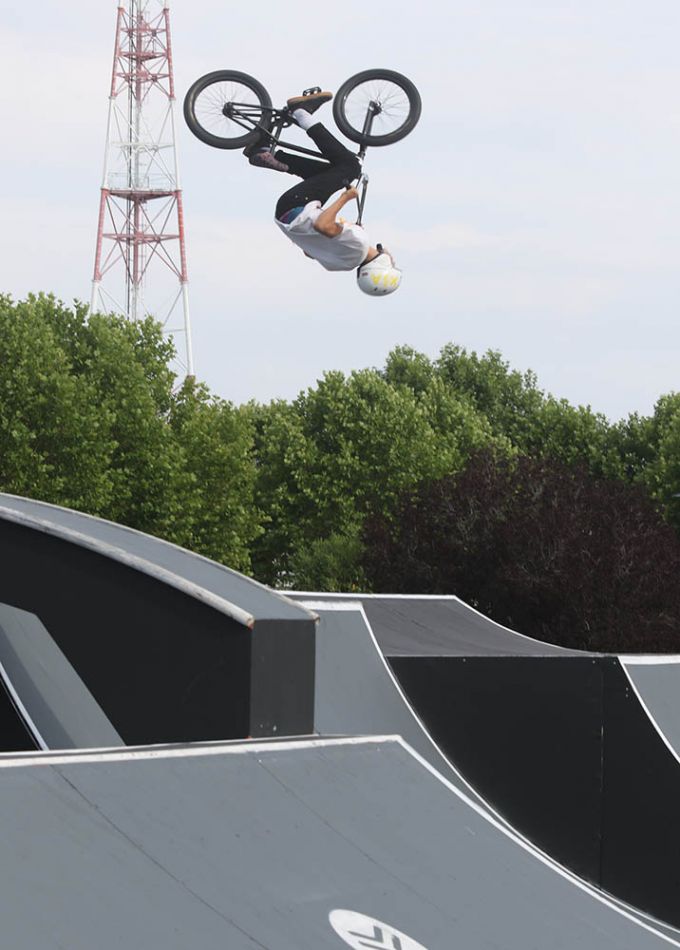 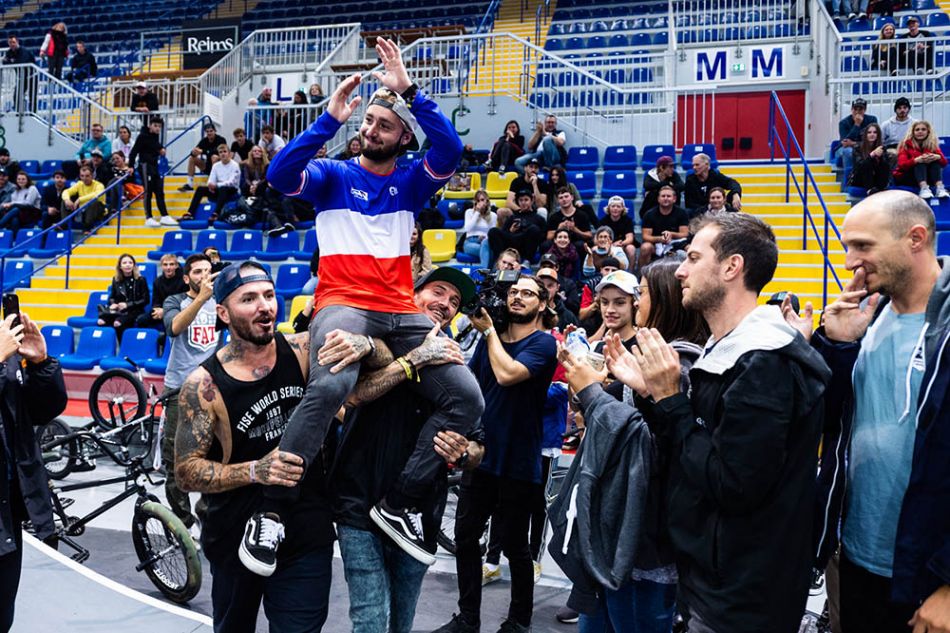 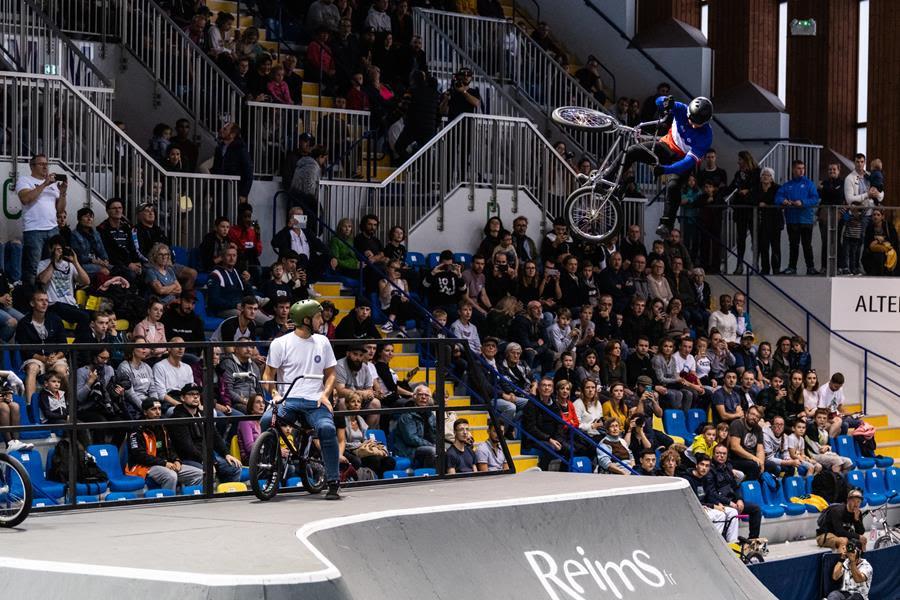 FISE XPERIENCE SERIES 2019: Anthony Jeanjean won the UCI C1 event in Reims this weekend and the first French Champion title. Last stop of the FISE Xperience Series 2019, Reims was welcoming the first-ever BMX Freestyle Park French Championships FFC, as well as the last opportunity in French to grab points toward Tokyo 2020. Winning the FISE Xperience Series overall ranking 2019 offers an invitation to the FISE World Series 2020 (transport, accommodation, contest registration). We promised an "all included jam-packed way" to wrap the year, so it was also the last stop of the FFC French Cup. Oh, well, moreover we were hosting a Dirt Contest. Take it easy - Jeanjean won it all.