-You were one of the first Australian riders to live and ride in the USA. What made you decide to pack up and give it a go?
Colin: I took up Chad Kagy’s offer to stay at his place in Nor Cal, I couldn’t miss out on that. The Fox video just came out and the Nor Cal scene was in full force. Chad was always going to comps when I was at his place, and he asked the Hoffman crew if I could go in the X trials in Louisville, KY. They accepted and it was on from there. I felt it was just the right place at the right time, I didn’t expect to do as well as I did.

-How did you manage to survive in the beginning?
Colin: I was working as a shop fitter for two years and I won some money from the Aussie X treme games before I went to America the first time. 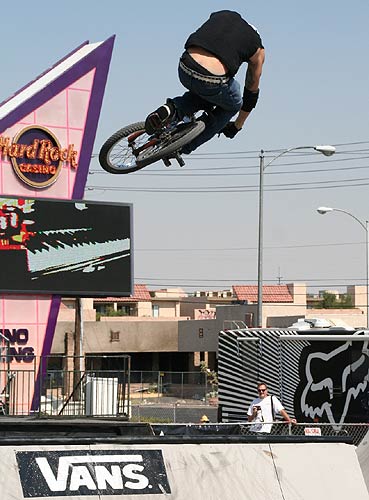 -You picked up some good sponsorship for the next couple of years but then all of a sudden Huffy, Osiris and Split decided to drop their BMX team program. What was on your mind?
Colin: Yeah what a disaster! Well Osiris wasn’t doing so well, they had such a great thing going, but Business wasn’t booming unfortunately, the Skaters on the team felt the wrath also. Huffy Choked 3/4 of the way through my contracts second year, I was warned that the ship was sinking, I tried to last a few more months, I wasn’t ready for the bankruptcy, they owed me a lot of money at the time as they kept quiet for three months and never repayed outstanding travel that was billed to my credit card. It was a real bummer; then to top it off, I get a call from SPLIT saying we were all off the team, I thought SPLIT was going great, I guess they were happy with the surf and skate image.

-What did you do to pay the bills once that happened?
Colin: I didn’t have any money saved, and I had a lot of bills, I had to come up with money fast so I sold my brand new Ram that I'd only had six months. My wife Kelly took on an extra job to help out, that was nice of her; I Just lived off the money from the Ram.

-Was your love for BMX stronger than the love for making money?
Colin: BMX always is stronger, no matter what since I started riding. I think making money riding bikes is not the same as putting in a hard week at work, where you really feel like you’ve earned your pay. BMX money is just a bonus really. When I was broke though with no sponsors, I really knew what a dollar was worth.

-Did you ever think, "This party’s over, I’m going home?"
Colin: Yeah of course, I was really thinking about it. I didn’t understand because I was riding better than ever, I had a couple of offers from companies, but I didn’t take them up. I just stuck it out. Vans gave me a lot of confidence mid year, helping me out with travel.

-How did not having major back-up, reflect on your riding?
Colin: Not being sponsored was actually cool. I noticed riders complaining about the smallest stuff about their sponsors. I think it’s a great thing to happen because you don’t know what you’ve got till it's gone. Riding didn’t change, I was still me, and I wasn’t going to go learn a triple somersault or anything. I just had to decide between a plain black tee, or a plain white. 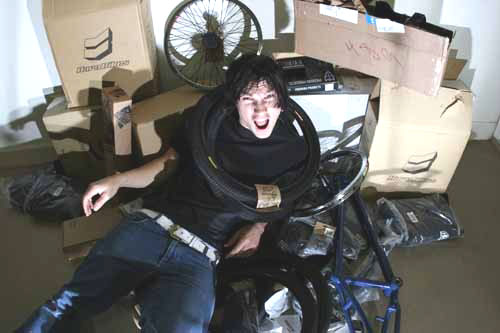 -Are you stoked to be on the HARO program?
Colin: Haro. It’s an honor. I didn’t believe it when I heard they were interested, I figured it would pass and nothing would happen. I’m so excited about the whole thing, the guys in charge, Tony and Pete are the best, and I’ve known them for ages. Haro as a brand is great too, they were massive when I started riding, and when I was 13 I was bummed when a kid at school bought the only Haro jersey they had at the local bike shop. I wanted it so bad. I managed to get a Haro Shredder frame though and I rode that for a while. Nyquist rules, he’s a close friend. Haro is very international and they support riders everywhere, I’m looking forward to being part of the team.

-What’s in store for you with them?
Colin: I just helped them design a frame; it’s not a signature frame though, with 21tt, mounts on the bottom, small tubes and dropouts, removable gyro tabs. It's looking great I can’t wait to get one. Haro’s really interested to re-do any of the existing parts with any Ideas I have, which is great also.

-Give short answers on the following words:

20/20: Australian BMX mag, been around for almost 10 years, no racing, and do so much for the Aussie scene. Great job!

Kangaroo: Kym Grosser just told me he shot one from long distance, and when he got up close it had a Joey in the pouch, It made me sad.

Shoes: I kind of ride for Vans, they offered help when I needed it most, but I’m not on the official team. The shoes are great, stylish. They took care of a lot of travel in 05 and I appreciate it. Thanks Jerry.

Magazine: I look at all the BMX mags; they’re all so different. I’m really into photography so I check out photo’s more than anything. Skateboard mags are really good for that as well. I never buy them, just look at them in the Newsagents.

Music: I really like bands with some passion; my current favorites are, Something with Numbers, Hawthorne Heights, My Chemical Romance, Senses Fail.

Practice: I love to ride a few hours in the Afternoon, I don’t do big tricks a lot, I just like cruising, as long as I’m riding with some mates it's all good.

No-hand-three-60: Yeah I like those, don’t do them enough, I save it for the comps. Wish I could blast it first set, but it's scary.

Australia: Australia rules, I miss it a lot. I’m in Australia now. There’s so many amazing riders that people will never see unless they rock up to their local park. There’s 7 Aussie riders that currently spend a lot of time in the States, and there’s a bunch more that are capable of doing really well that are brewing in Australia. Australia’s always had an amazing scene; it just took a long time to be discovered. When I was competing in Amateur in Australia, there was a bunch of Pro’s in Aus that could have hung in Pro in the States.

Concrete parks in Australia: Pretty guaranteed to be a cement park in every town, there’s thousands in Australia, no two alike. Some might be crap, but there’ll be something fun to play on. They’re mostly small, around 5ft. Also There’s probably going to be ten dunga’s hanging out to one or 2 riders.

Thanks: Kel, Dave D, Corey B, Guettler, Cam White, Parslow, Stevie, Stu-John, Jerry Badders and Vans, Tony and Pete and Haro thanks for thinking of me to be part of the team, and Fat BMX. Winkelmann R.I.P

More in this category: « Markus Wilke talks about his new sponsor: KHE Kari Olandese interview by Lloyd Ramsay »
back to top