How to jump out of a helicopter. By Kriss Kyle. 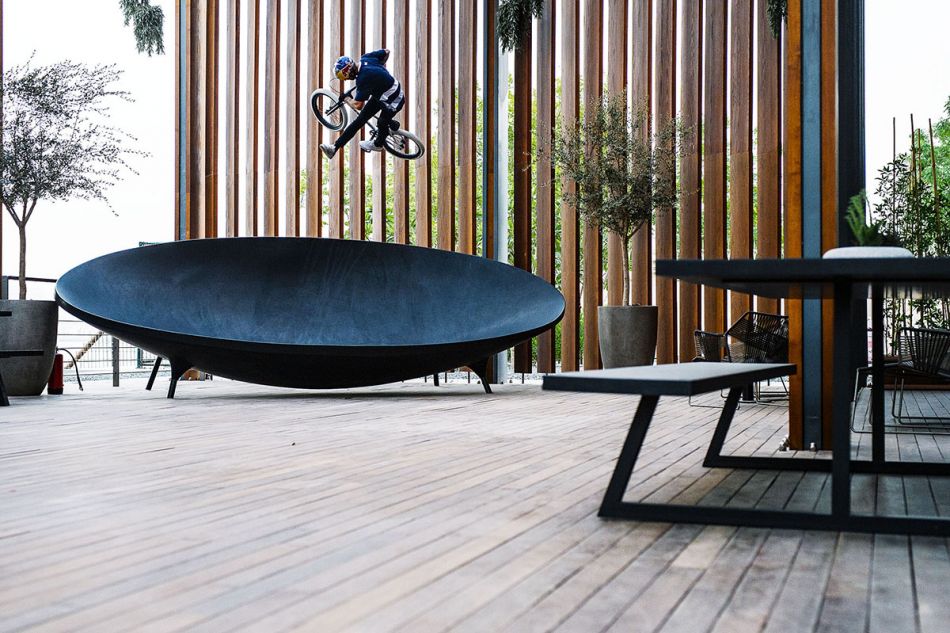 What does it feel like to jump out of a helicopter with your bike? Kriss Kyle has done it and explains how it feels. He also got to ride some giant slides of a waterpark in Dubai. Interview number two on the project. Worth a read.

What did you think Dubai would be like before you went?
Kriss Kyle: Before I went to Dubai, I didn’t really know what to expect because you see it on tv and it looks like this incredible place. Everything looks so high-end. I have thought about riding there in the past but I didn’t know it would be possible. I saw the skating video We Are Blood so I knew there would be amazing spots, but they had security helping them access all the spots. 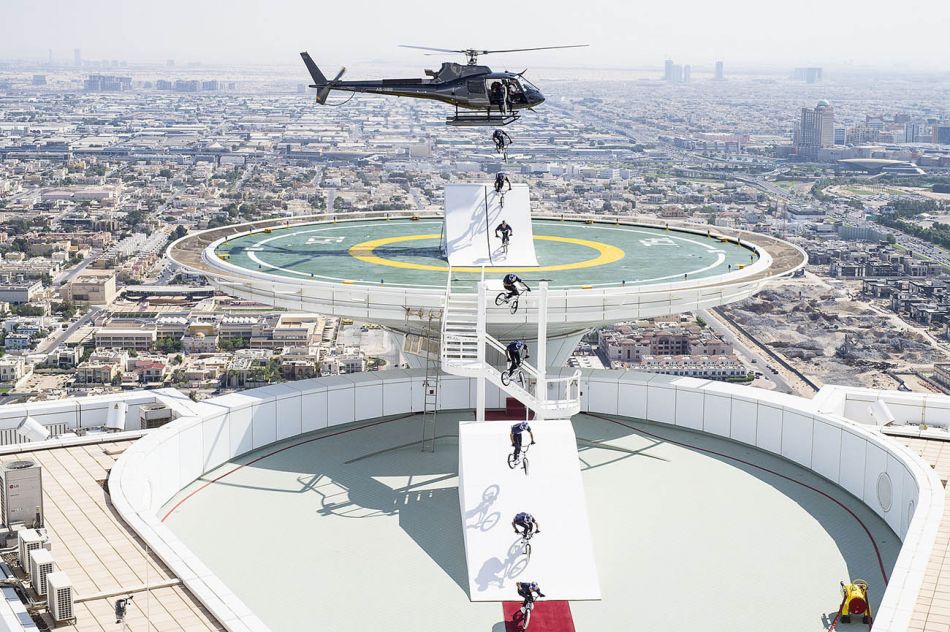 lso, it's in the desert and I’ve never been to somewhere like that before. It was crazy, when we were flying in, I remember being like ‘oh my god, we’re properly in the desert’. It’s incredible. It reminded be a bit like Vegas but everything is a lot nicer and cleaner.

Everyone was super nice and I already can't wait to go back. The sheer size of the buildings is amazing – they’ve got everything there and everything is the best. There’s no litter because they keep the city so clean. It’s a beautiful, beautiful place. 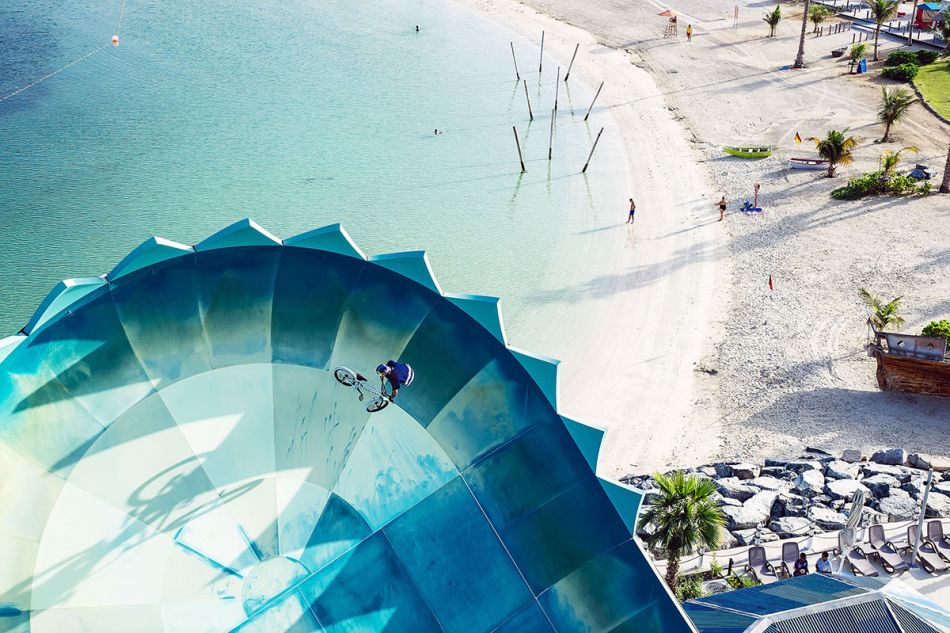 The video opens with the helicopter flying over the Burj Al-Arab and you’re hanging off the side with your bike. What was going through your head in that moment and how your body reacting?
Kriss Kyle: We went to the Burj Al-Arab for the reccy and they asked if I wanted to do something up there. I was like ‘yeah, I’d love to jump out of a helicopter’, kind of joking and not fully expecting it to be possible. A month later we got an email saying that Dubai Tourism was going to get us a helicopter and I was going to jump out of it. I thought, ‘oh my god, what have I got myself into?’ 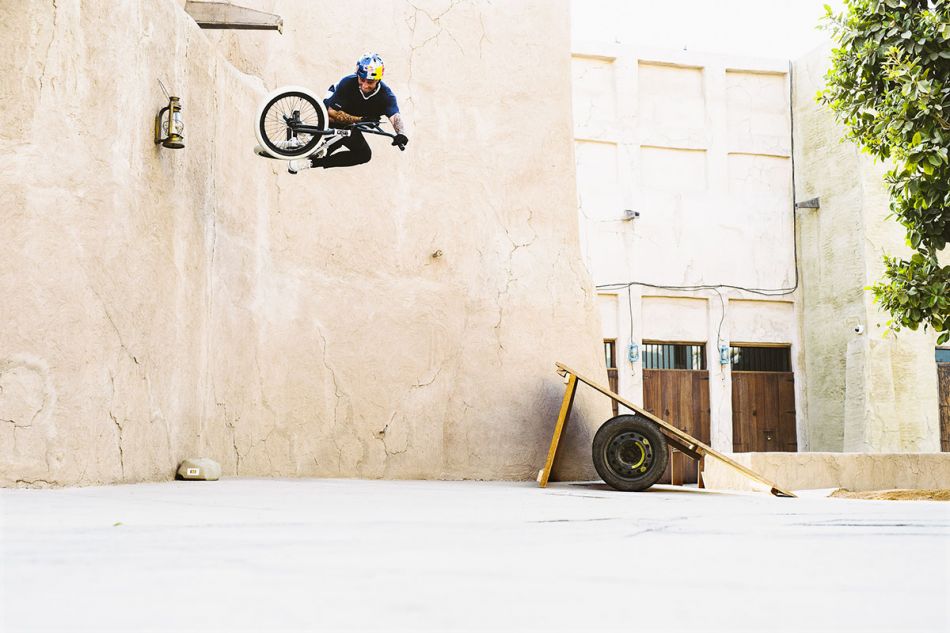 The whole of last year I was excited but sweating a bit about it. I’m scared of heights, which is not something a lot of people know about me, and because I had waited all year, I psyched myself up. I had to program my whole body for it. It’s amazing what the human body can do because I’m so scared of heights. Before flying out and on the plane I kept saying to myself ‘I’m doing this. No matter what I’m definitely doing this’.

As soon as I got there and we were up on the helipad, all of a sudden the helipad looked a lot smaller than what I remembered. We had a practice day and I was strapped to the side of the helicopter without the bike and it was terrifying. 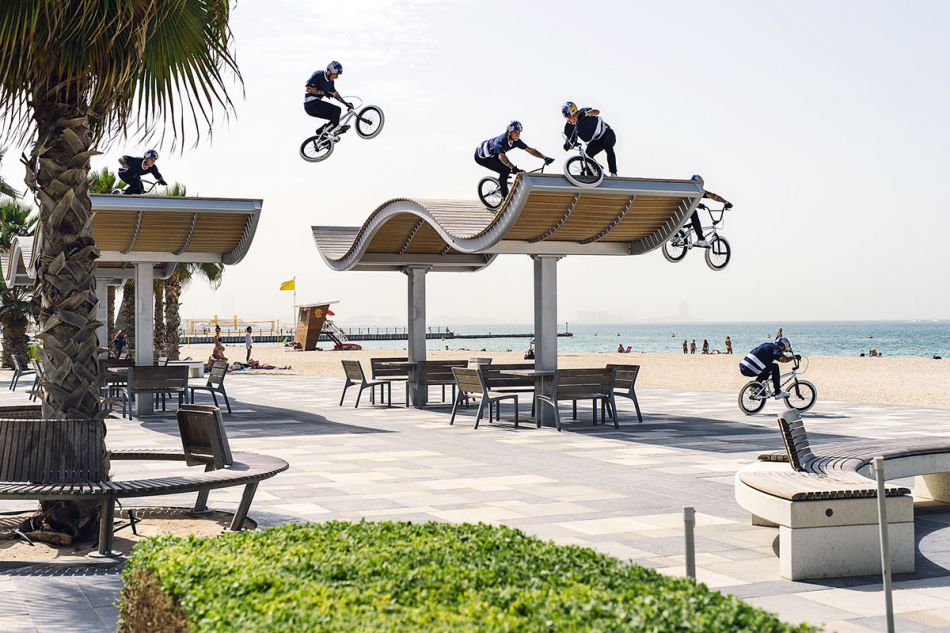 It just went straight up and it was wobbly and loud, it was insane. I was white as a sheet hanging out of it. It was absolutely terrifying.

Then we tried it with the bike because we didn’t have that long to practise. As soon as we took off with the bike, the wind just pushed the bike against my leg and trapped my leg against the helicopter. I was trying to manoeuvre the bike back around but because of the wind pushing it, I couldn’t. At that point, it felt like it wasn’t going to work. 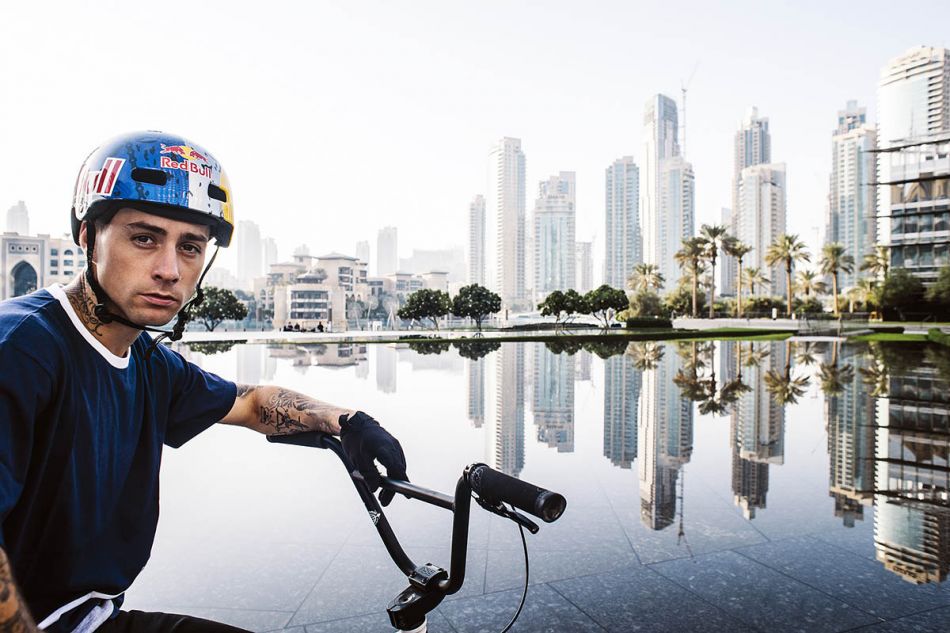 We started practice jumps, started at around 6 ft and then increased the height each time. You’re trusting the pilot to get in the right place and it’s so wobbly because the wind coming back up at you is like a hurricane and my bike just wanted to blow away from me. I was getting a cramp in my arms trying to hold on to my bike and the first few times I jumped out it [the wind] forced me sideways, so I learned quickly I had to face my body and bike the other way to compensate for all the wind.

After a few trial jumps (we maxed out at about 14 ft and the ramp was 12 ft), I was feeling pretty confident. I had a pretty good sleep that night and when i woke up the next day i was stoked to go and do it. 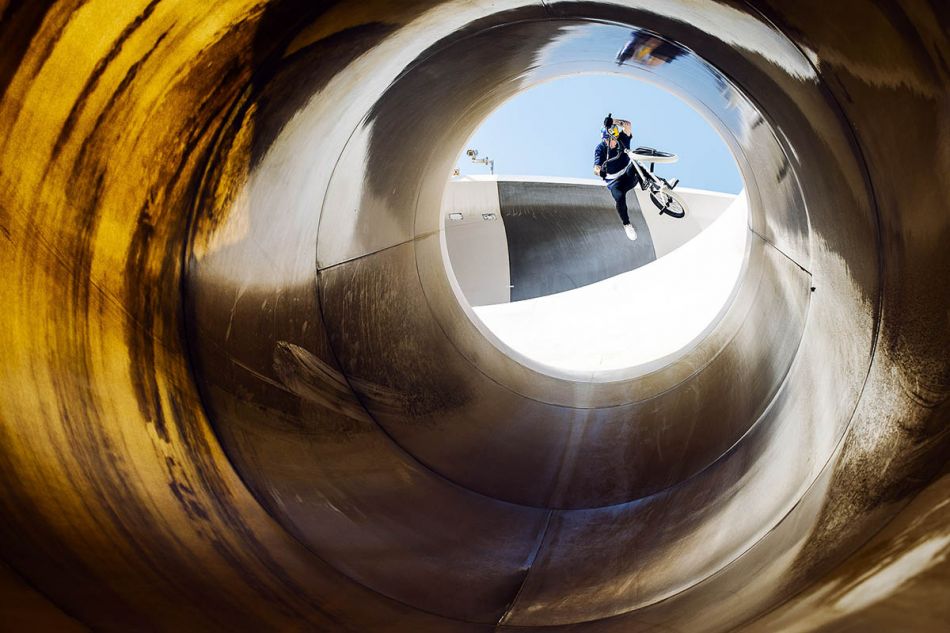 When we got to the site we were told the helicopter we had the day before had a mechanical failure and I was like ‘oh my god, why today?’ Because I was so ready to do it! Luckily they had a second helicopter with only one engine, which they said would make it less windy. I thought it would be the exact same but it wasn’t. My back wheel kept getting snagged so it was even scarier. It felt like the down-draft was even worse than the day before. I had to keep telling myself that I can do it, so after a few practices I was ready to go.

The scariest part though is that after I land the jump from the helicopter, I had to correct myself straight away because I only had 5 metres until I had to go through those two bollards and then hit the other 30 ft drop. 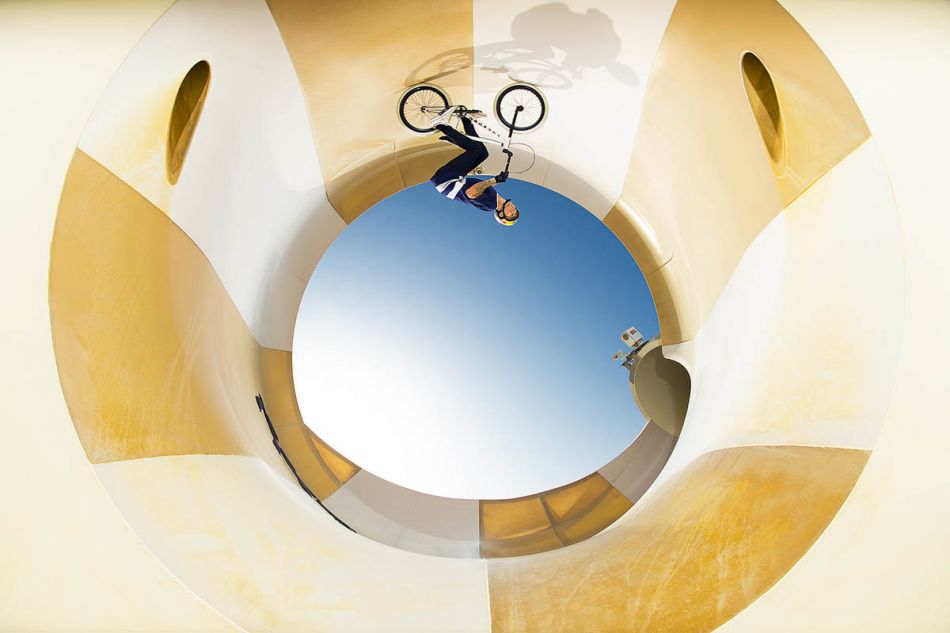 When I landed on the red carpet and rode into the lift all my friends were there and cheering. I couldn’t believe it, I was almost tempted to do it again but I was satisfied with it so thought I’d better not.

The water park scenes look incredible. What was it like riding them?
Kriss Kyle: That was a dream come true. They have the best water parks in the world so it was an absolute honour. The cool thing about Dubai is that they can turn the water off when they want to. Anything we wanted to do they were like ‘no problem’. They were massive, the slides were also so high up I was scared of going over the side. I knew I wouldn’t, but like I said I’m scared of heights. We went in at 6am to film it and we only had two hours to film it. 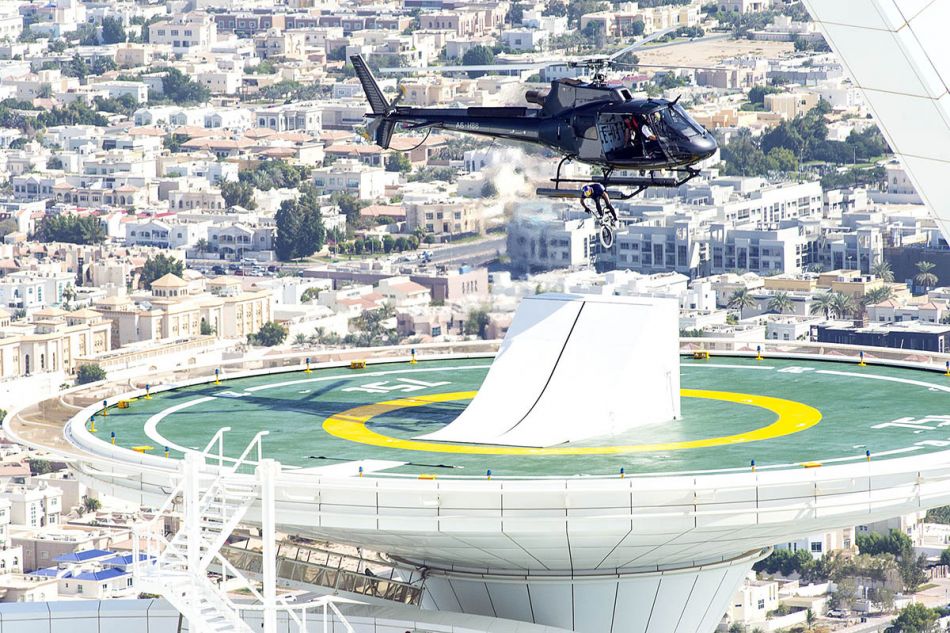 There was quite a lot that I wanted to do. The whole vibe of everyone being there was incredible. The feeling of flying down those flumes at 30 mph was just insane. It was more fun on a bike that it is on a rubber ring!

What was your favourite spot to ride? 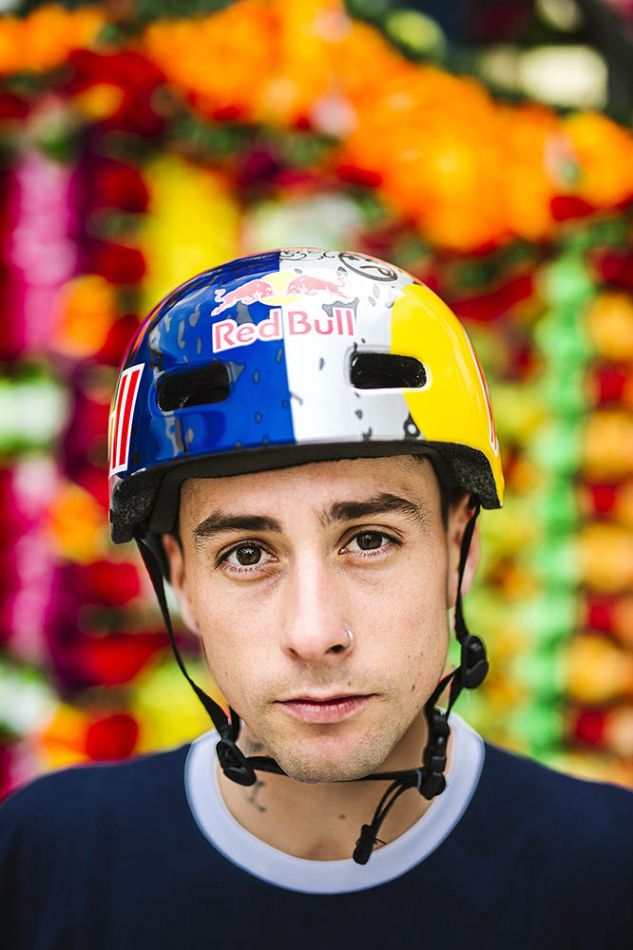 Kriss Kyle: I loved the water parks, my favourite was Laguna. It was more like a proper session than the others.

What was the biggest challenge?
Kriss Kyle: The hardest part was definitely the helicopter because of the wind and the storm that was coming in. It was stressful, but I like putting myself in those high pressure situations. High risk, high reward. I just want to keep doing big projects like this.

This is a massive achievement, and one that will be hard for someone else to imitate. Where does it stand compared to other video projects you’ve done in the past?
Kriss Kyle: It’s definitely different. Kaleidoscope was amazing and still to this day it is the biggest thing I’d ever done. This one is completely different because it’s street riding and big stunts as well. I would say this has been my favourite one so far.

Is there anything you can do to prepare for something like the heli-jump, mentally or physically?
Kriss Kyle: Not really. I knew what I was getting myself into so I was able to prepare for it in my mind. If I say I’m going to do something, I will do it. Mentally, I think this project has made me stronger and I can’t wait to do more, bigger projects. I’m constantly thinking about what’s next.